The specific epithet refers to the Tupi-Guarani (Indigenous Brazilian tribe) name of the National Park where the type material was collected.

The largest live specimen (paratype MZUSP PL 998) measures up to 48 mm in length and 4 mm in width (see Table 1 for size of fixed specimens). The body is slender ( Figure 1 View Figure 1 ). Dorsum highly convex in cross-section; body margins rounded; ventral side slightly convex. The cephalic region, which bears the glandular cushions typical of the genus, is kept rolled up in the living worm when creeping and resting. The posterior end is pointed. The creeping sole is as wide as 74% of body width at the pre-pharyngeal region. Mouth 19.5 mm from anterior end, gonopore at 23 mm (holotype).

Ground colour of dorsum is yellowish-brown; ventral side pale brown in the cephalic region, cream in rest of the body. Dorsum of holotype and of paratype MZUSP PL 999 with dark brownish spots of different size, more densely concentrated paramedianly, so delineating an irregular longitudinal stripe on each side. In the G, gonopore; L, length; M, mouth; W, width. paratype MZUSP PL 998 the dorsal region is almost completely covered by a dense web of brown pigment. There is medianly a darker longitudinal stripe of brownish pigment.

Eyes formed by one pigmented cup, 40–45 µm in diameter. No clear halos around them. Eyes absent in the first 3.3 mm of body (paratype MZUSP PL 999). Posteriorly they are irregularly arranged in a marginal row of three or four eyes throughout body length. At pre-pharyngeal region the eyes spread onto the back in a band 12% of body width. Sensory pits distributed ventro-laterally in a uniserial row from 1.8 mm behind the anterior end to near ovaries (paratype MZUSP PL 999).

Epidermis ciliated only in creeping sole. Contrary to what occurs along body, in cephalic region the bodies of the rhabditogen cells that discharge through the glandular cushions are located between retractor muscle and ventral epidermis.

The cutaneous musculature comprises the three typical layers of Geoplaninae   ( Table 2): a subepithelial circular layer followed by two diagonal with decussate fibres, and then a strongly developed longitudinal layer with fibres arranged in bundles ( Figures 2 View Figure 2 , 3 View Figure 3 ). As characteristic of the genus, some of the muscle fibres of ventral Lowest and highest number of muscle fibres per bundle are given in parentheses.

Testes located under supraintestinal transverse muscle layer, partially placed between the intestinal diverticula ( Figure 2 View Figure 2 ). They extend from level of ovaries to root of pharynx (paratype MZUSP PL 998). Sperm ducts run immediately above subintestinal muscle layer, slightly dorsal and lateral to ovovitelline ducts. Near prostatic vesicle, they curve dorso-anteriorly to communicate with the two vertical, dilated branches of extra-bulbar portion of vesicle ( Figures 5–8 View Figure 5 View Figure 6 View Figure 7 View Figure 8 ). The latter is dish-shaped, diagonally inclined, and receives the branches through its anterior ventral face. It continues inside penial bulb as an ample, almost horizontal, tubular portion. Its opening into male atrium is narrow in holotype and wide in paratype MZUSP PL 998. Male atrium has some small folds entally, and a large ventral fold ectally. There is no ejaculatory duct as a differentiated portion.

The genus Choeradoplana   currently contains six species: C. ehrenreichi von Graff, 1899   , C. iheringi   , C. langi von Graff, 1899   , C. bilix Marcus, 1951   , C. catua Froehlich, 1955   and C. marthae Froehlich, 1955   . Regarding the colour pattern, all of them, except for Choeradoplana iheringi   , differ from C. bocaina   in that they have sharp dark longitudinal lines or bands on a clear ground, instead of the dark speckles of variable size and density, as in C. bocaina   . In C. iheringi   , the back is homogeneously mottled with minute brown spots.

Regarding the internal morphology, C. bocaina   does not have any peculiar outstanding characteristics. However, morphological details, or the combination of features of the copulatory complex as well as those of the pharynx, do not allow its identification with any of the previously described species. Choeradoplana catua   , a species with dark lines along the body, is the most similar as regards the general anatomy, but its prostatic vesicle is completely intrabulbar, contrasting with that of C. bocaina   , which is partially extrabulbar. In addition, in C. catua   , the dorsal insertion of the pharynx and mouth are at the same transverse level, whereas in C. bocaina   , dorsal insertion is anterior to the mouth. 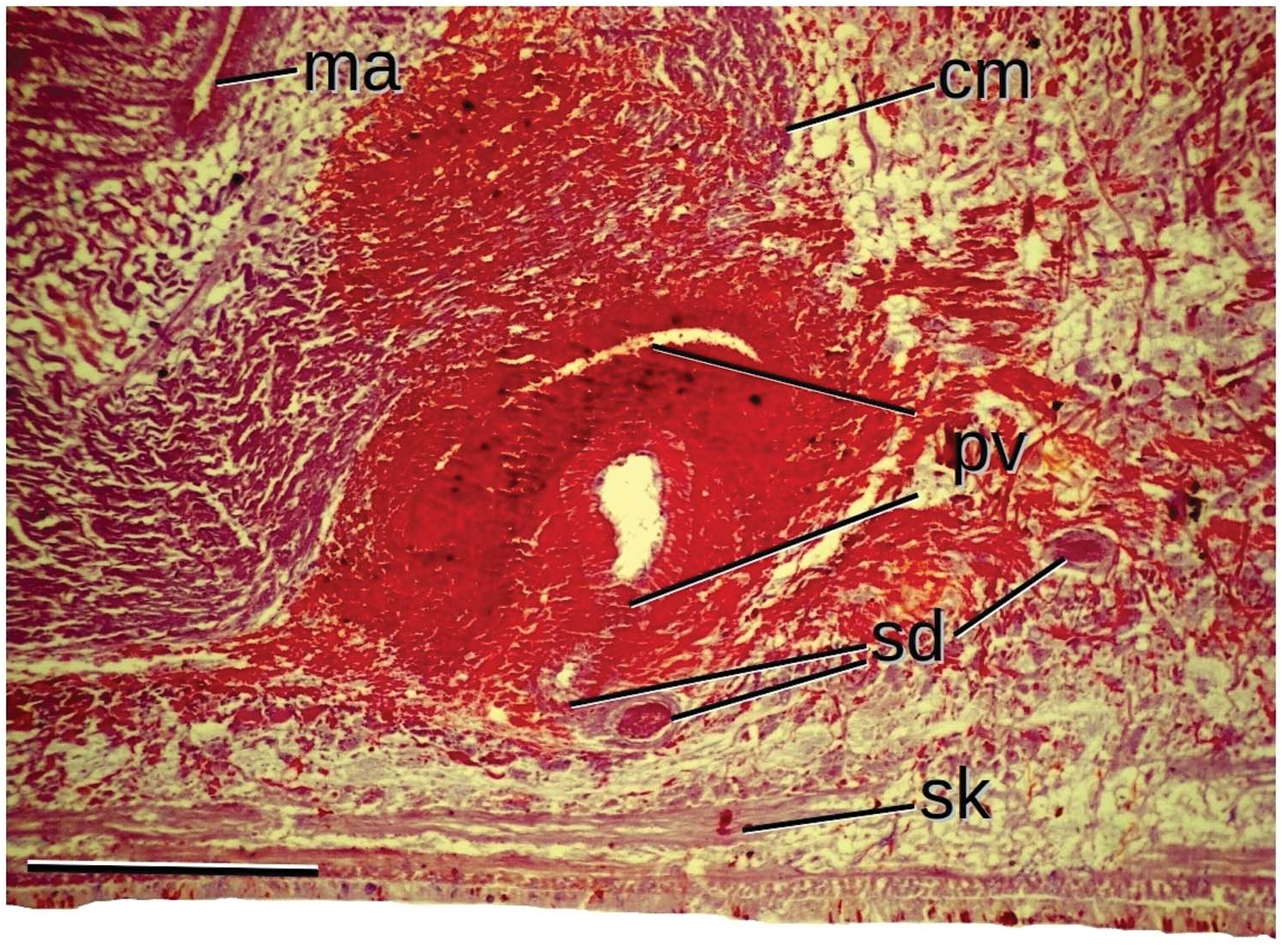 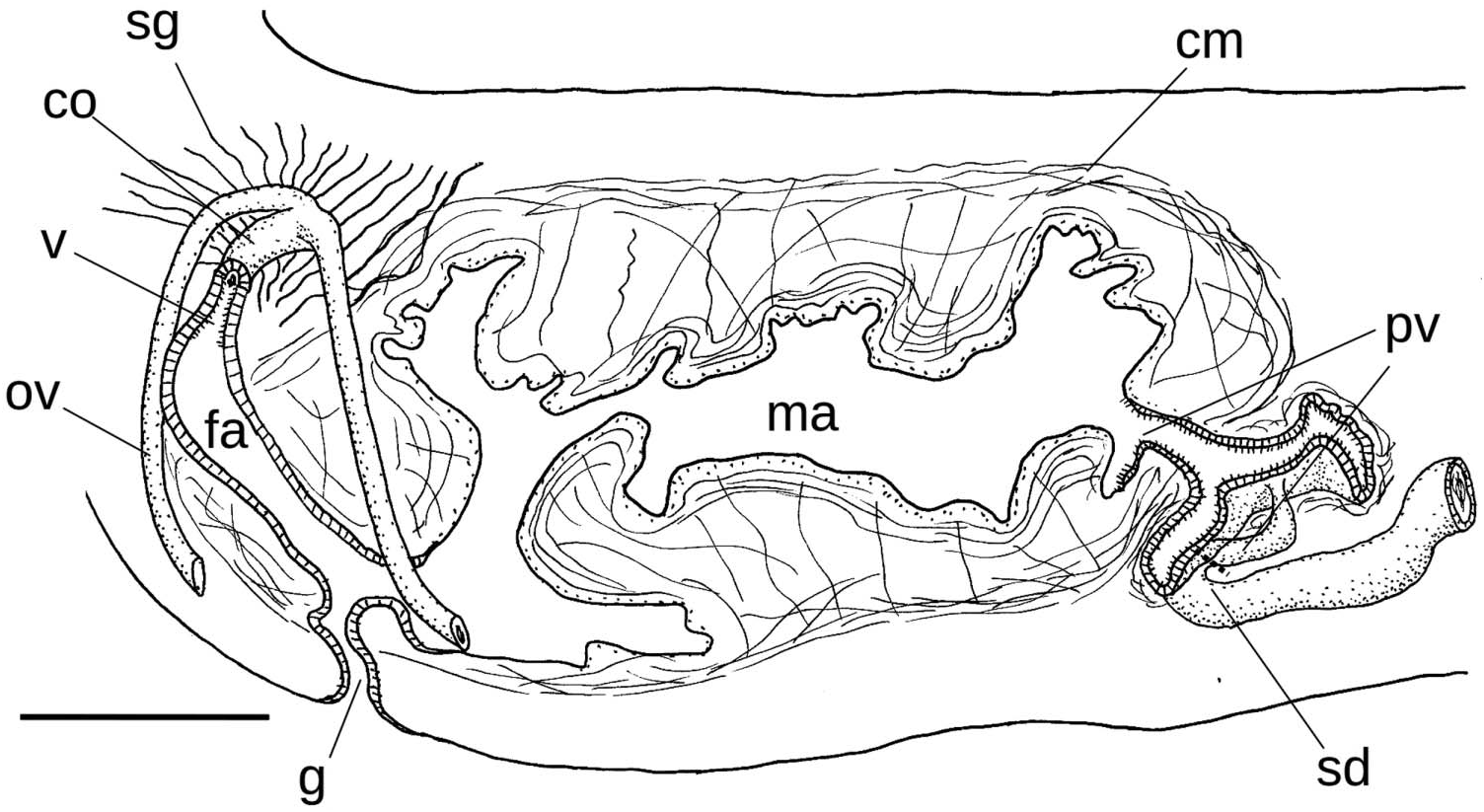