The Namba Flat Gecko, Afroedura bogerti   was described using a single male specimen collected by Harry and Alan Chapman in 1925 during the Vernay Expedition to Angola ( Loveridge 1944; Branch et al. 2017b). According to Loveridge (1944), the specimen was collected at 'Namba (Mombolo)', even though Bogert (1940), in his list of Angolan localities, mentioned only ‘Mombolo’ and gave rough co-ordinates for it. The collectors were the sons of a famous South African farmer, William Chapman, who had hosted the scientific members of the Vernay Expedition on his properties. Within the Mombolo Region, William Chapman and his family had built or lived in three farms, Sandula (which he named Monte Victoria-Verdun and which later became Monte Verde), Chipepe (= Quipepe) and Namba (where a religious mission was subsequently established - Missão da Namba). Branch et al. (2017b) provided a detailed systematic review of A. bogerti   in Angola and, noting the uncertainties regarding the exact localities of Chapman’s material ascribed to Namba/Mombolo, restricted the type locality of the nominal form of A. bogerti   to a polygon encompassing his three farms and the village of Maka-Mombolo. However, this created a taxonomical problem, as the specimens from Chapman’s farms of Sandula and Namba represent two genetically-distinct clades. To resolve this issue, we re-instated the original type locality reference of ‘Namba’ and here restrict the type locality to the northern areas of Mombolo in the vicinity of Missão da Namba and, by default, the material from William Chapman’s farm of Sandula represents an undescribed species.

(description based on the adult material listed above). Head and body dorsoventrally compressed; SVL 46.4-53.5 (mean 50.0) mm, HL 10.9-12.6 (mean 11.6) mm, HW 7.8-11.2 (mean 10.6) mm, broadest at posterior level of eye and 1.1-1.4 (mean 1.3) times longer than wide. Eyes large (2.1-4.3 [mean 2.8] mm wide), pupil vertical with indented margins; circumorbital scales small and smooth, elongate at upper anterior margins, upper posterior scales with small upward pointing spines. Snout rounded, 4.5-5.0 (mean 4.3) mm long, slightly longer than distance between eye and ear openings (3.6-4.3 [mean 3.6] mm). Scales on top of snout smooth, rounded, scales to the side larger than central ones, with no intervening minute granules. Scales on snout slightly subequal in size to those on back of head or nape. Scales on eyelids larger than those on the crown. Circumorbital scales are separated by a row of smaller scales from the large scales on eyelid. Nostril pierced between rostral, two to three nasal scales and the 1st supralabial; the supranasal being much larger than the subequal postnasals and being separated from each other by one to two smaller scales. Nostrils slightly elevated. Rostral roughly rectangular, but with its upper edges elongated due to extensions into the nostril. Supralabials 8-10 (mean 8.4). Infralabials 8-9 (mean 8.3). A total of 11-14 (mean 12.4) scales across the crown at level of front of eyes. A total of 14-16 (mean 15.4) scales from front of ear to back of eye. Mid-body scale rows 69-77 (mean 73.5). Original tail slightly dorsoventrally flattened and distinctly verticillate, with obvious lateral constrictions that are not that distinct to the tip of tail; each verticil comprising 5 imbricate rows of scales dorsally and 4 imbricate scale rows ventrally and with ventral scales approximately twice the size of those on the dorsal surface. Limbs well developed, hindlimbs slightly longer than forelimbs. All digits with a large pair of distal scansors, separated by a large, curved claw and followed after a large gap by a smaller pair of scansors; infero-median row of digital scales enlarged transversely, particularly towards the scansors, where the terminal scale adjoining the first pair of scansors may be medially constricted, swollen and scansor-like, enlarged subdigital lamellae on 4th toe 6-9 (mean 6.9). Precloacal pores 8.

In life (based on PEM R24187, Fig. 5A View Figure 5 ). Greyish above with six irregularly spaced darker grey crossbars from the occiput to the sacrum, central crossbars fused to form an X-shape; head with a dark grey band across the posterior edge of crown encompassing a small central pale spot; dark grey to black bar from nostril to the anterior margins of the ear opening; a vague, thin pale canthal stripe, extends on both sides from the nasal region to anterior margins of eye, continuing posteriorly of the eye to above the ear opening; upper and lower labials grey with diffuse yellow edges; lateral sides of the body with very faintly yellow-mustard scales scattered amongst more prominent darker grey scales; limbs greyish above with scattered darker grey markings with intervening faint yellow-mustard colouration; tail (regenerated) with irregular grey mottling; iris golden with a black narrow elliptic pupil with crenulated edge and black reticulation; ventre uniform greyish with scattered black specks; ventral limbs with scattered black specks, more prominent than on the ventrum. In preservative (based on PEM R24187): dorsum with six irregularly-spaced darker grey crossbars from the occiput to the sacrum with beige intervening blotches, central crossbars fused to from dark grey X-shape; ventre beige with numerous small scattered black specks on each scale, more prominent anteriorly, laterally and posteriorly. Variation: Greyish to brownish above with five to six irregularly-spaced darker grey-brown W-shaped crossbars from the occiput to the sacrum, sometimes fused in the middle to form X-shapes, limbs and tail with grey blotches; ventre uniform greyish with scattered black specks. Juveniles with more sharply-defined pattern. The original description of the holotype (Fig. 6 View Figure 6 ) was based on a preserved and bleached specimen: 'Above, greyish; back with five or six obsolescent, irregularly W-shaped brown crossbars; limbs and tail immaculate. Below, whitish, uniform’ ( Loveridge 1944). Examination of images of the holotype confirm the presence of fine brown coloured specks ventrally that indicates that the ventre was not immaculate as originally described.

(Fig. 4A View Figure 4 ). An exclusively rupicolous species sheltering in crevices and under flakes of exfoliating rock amongst large granite boulders during the day. Individuals were observed at night foraging in vertical rock faces of large granite boulders. The surrounding habitat was mostly montane grasslands and some cultivated fields, but also included stunted altitude miombo and some Afromontane forest elements in steeper gorges and between boulders. It should be noted that the southern face of Namba Mountain contains the most extensive and well-preserved Afromontane forest patches in Angola, recognised as an important biodiversity reservoir and regional hotspot ( Mills et al. 2013).

This species complex was previously considered to be widespread in granite boulders throughout south-western Angola ( Branch et al. 2017b; Marques et al. 2018). Here, we show that it is restricted to the Namba Region in the southern parts of Cuanza-Sul Province, Angola (Fig. 1 View Figure 1 ). Namba consists of a 25 km west-east orientated mountain range that climbs to an elevation of 2,420 m a.s.l. and towers southwards above the highland plateau of Mombolo. Our new series was collected at elevations of 1,750-1,850 m a.s.l., at the base of the south-facing slopes of the Namba Mountain chain, but the species probably occurs in suitable habitat higher up and possibly well above 2,000 m a.s.l. (Fig. 1 View Figure 1 ). Considering the deep genetic divergence between this species and Afroedura   present at the southern edge of Mombolo and the recognition of Namba as a biodiversity hotspot, it seems plausible for this species to have evolved in isolation on this mountain ‘island’. Nevertheless, A. bogerti   may also extend its distribution further north into other poorly-studied mountain ranges in Cuanza-Sul Province (Fig. 1 View Figure 1 ). The species seems to be relatively common in the Namba Mountains, but its biology remains poorly known. 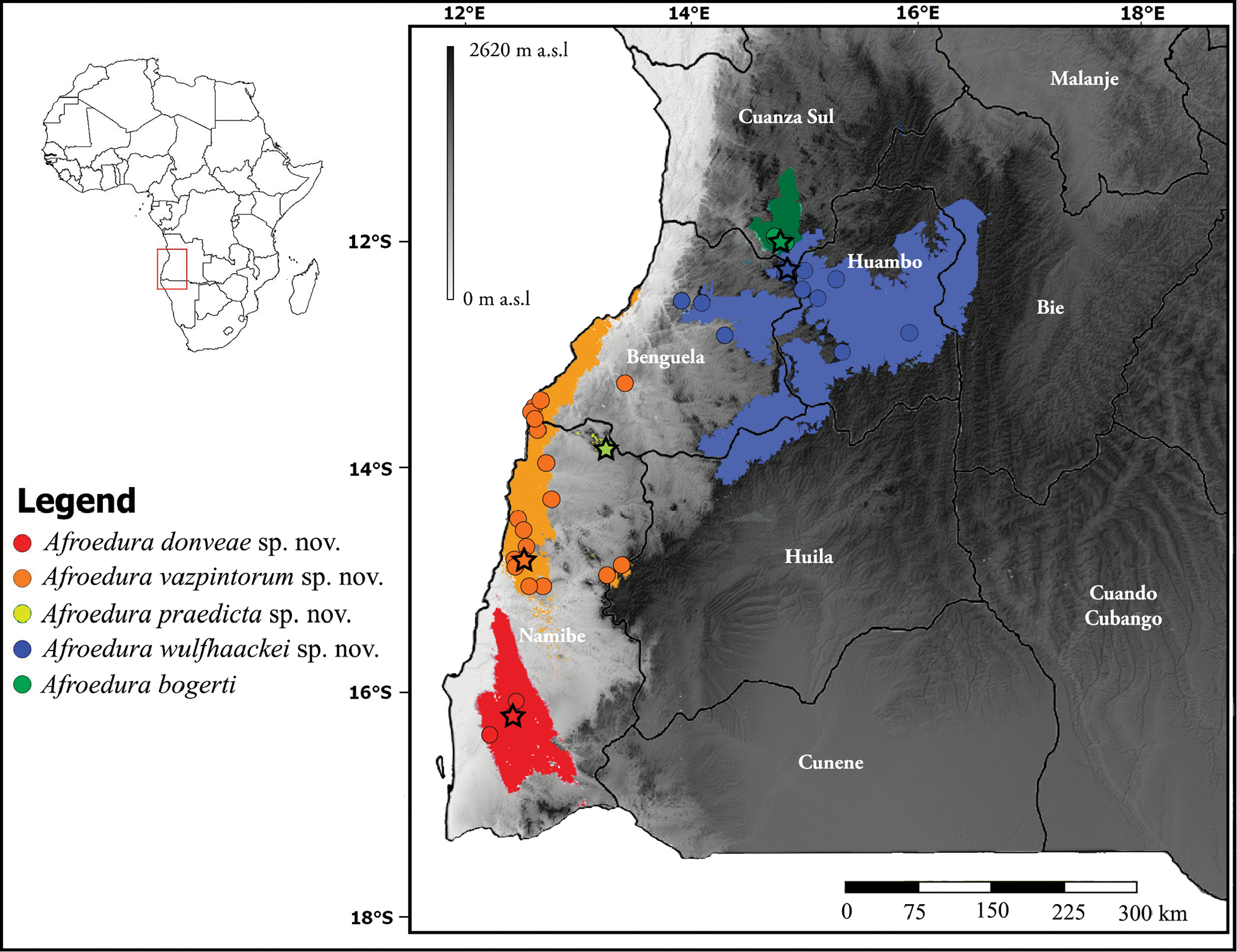 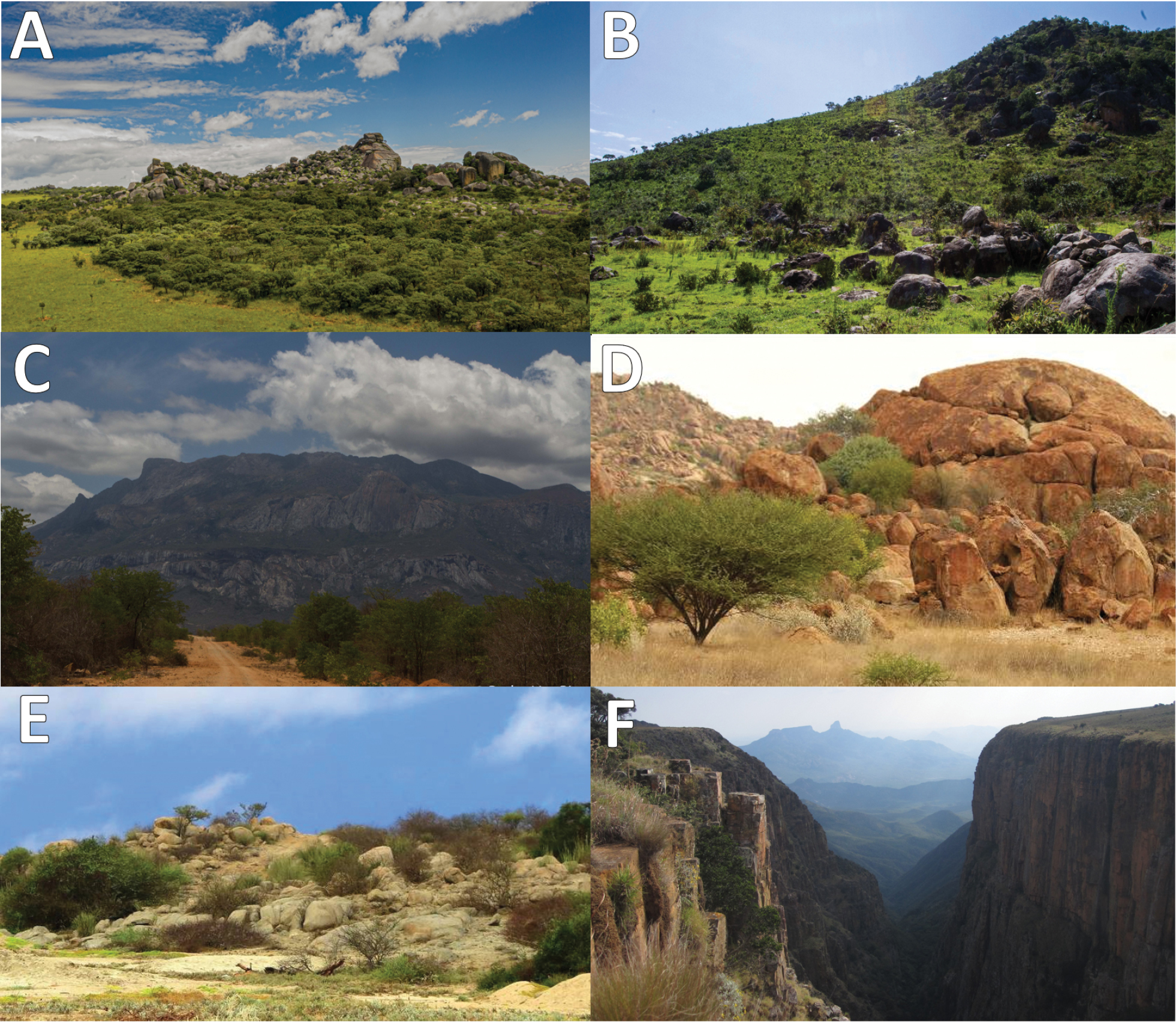 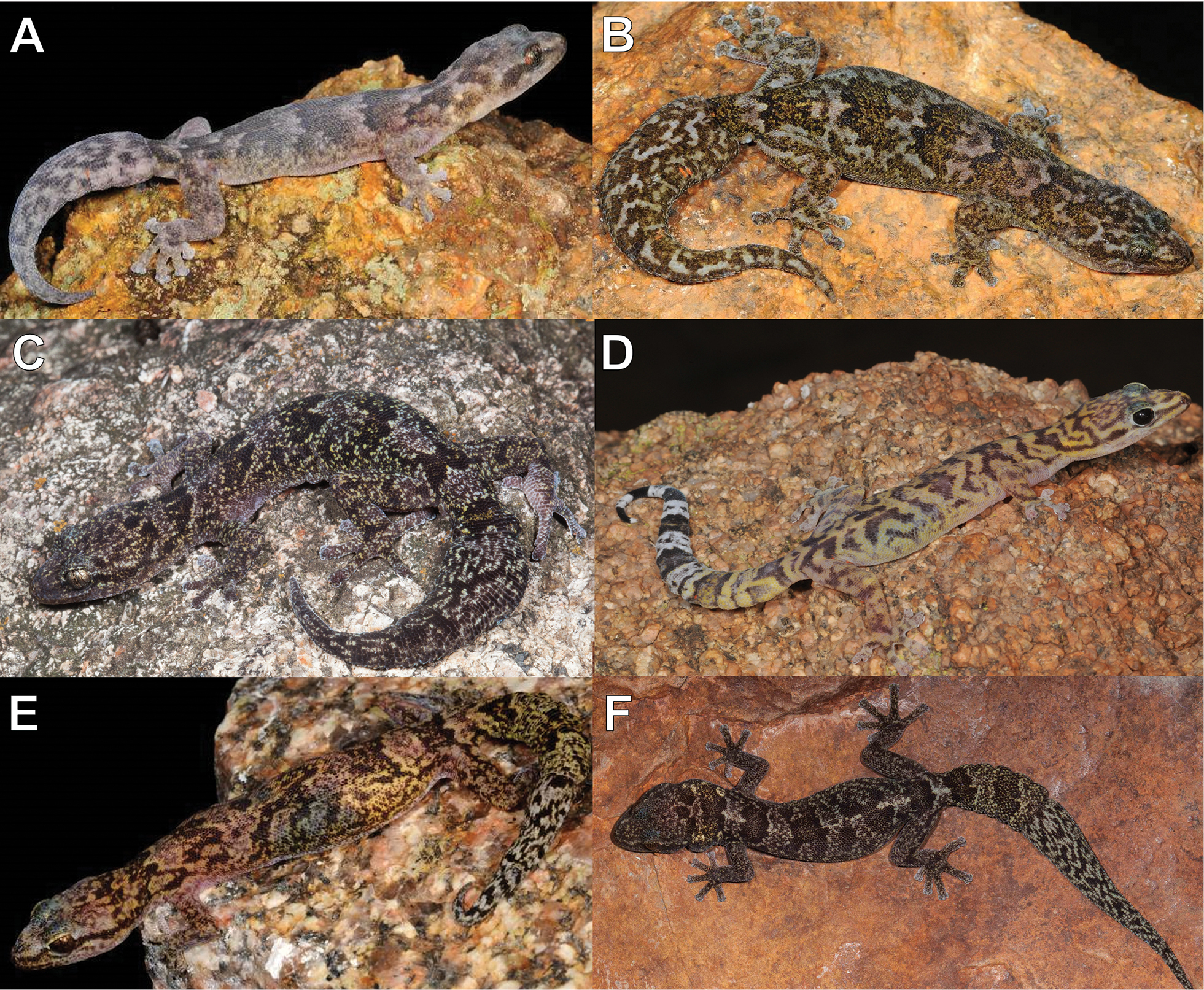 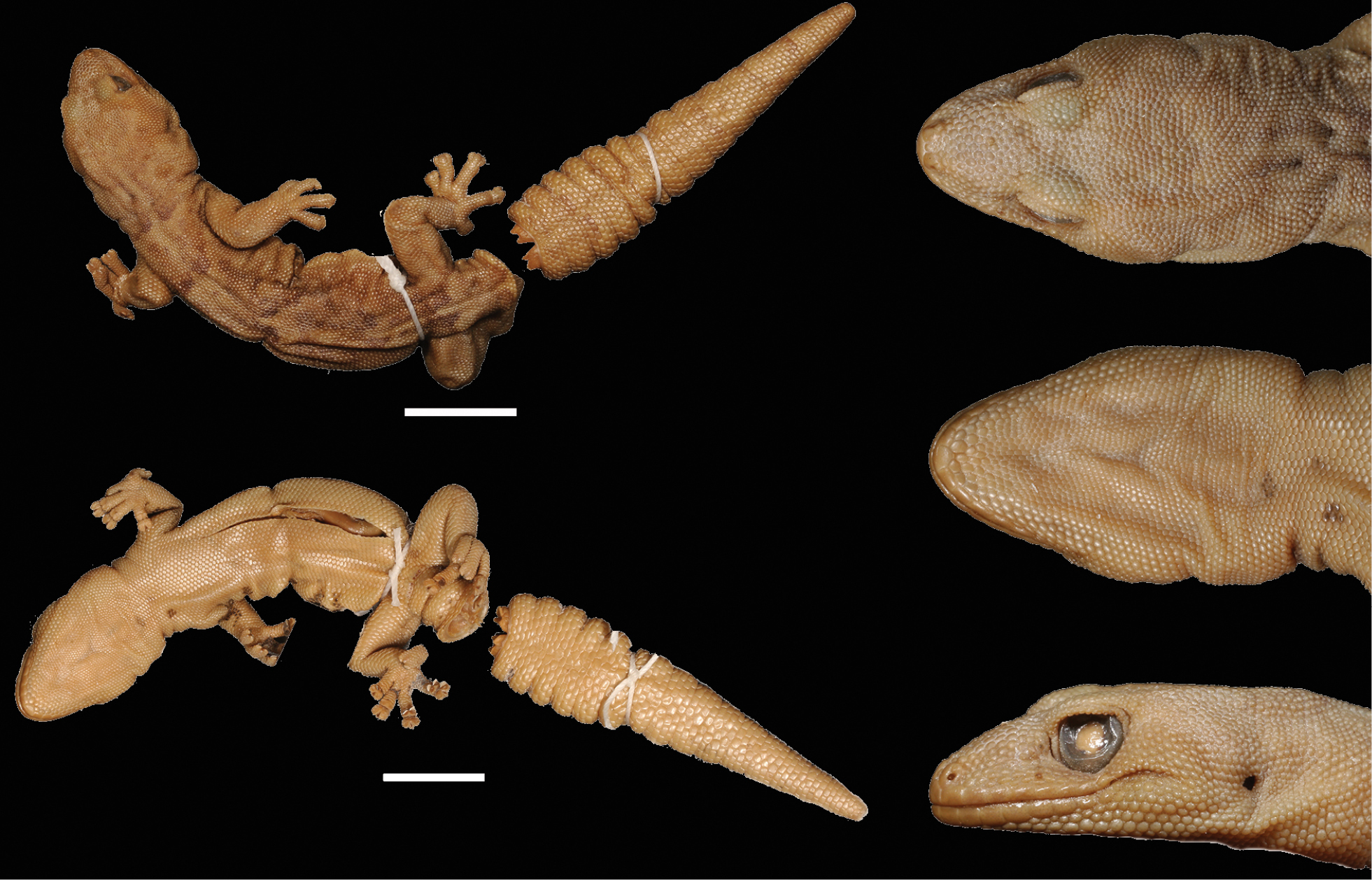