Redescription: Color: Anterior region of head black; remainder of dorsum with bright and metallic reflections of green, copper, and burgundy, with some of these colors predominating or, more commonly, a mixture of all. Pygidium colored as elytra. Metasternum bright and with uniform coloring.

Elytra: Striae very fine and, especially those more medial, carinulate from base to no more than midlength of elytra, where they become simple ( Fig. 37 View FIGURES 34 – 48. 34 ); interstriae, especially mesial, slightly convex, producing a grooved appearance of striae to the naked eyes. Sutural margin densely punctate.

Intraspecific variation and taxonomic discussion: The closest relative of G. lemoinei   is G. aeruginosa   , with which it was synonymized for more than a century. The description given by Waterhouse (1891), although short and based only on a single specimen, is very accurate and uses basically the same morphological features used by us to distinguish these two species; it is surprising, therefore, that this synonymy has remained for so long. Gillet (1911) was the first author to mention Waterhouse’s species as “ var. lemoinei   ” of G. aeruginosa   , not making clear, however, whether or not he considered them synonymous; d’Olsoufieff (1924) was the first to state unequivocally this synonymy. Nevertheless, neither of these two authors nor even Barattini & Saénz (1960, 1964) discussed or justified this synonymy or the condition of variety of G. lemoinei   , and it is very likely that they have not seen the type specimens. All this confusion probably occurred simply because of the superficial similarity that these two species show at the first glance; as they share only between themselves the following characteristics: genae and frons smooth adjacent to eyes ( Figs. 24–25 View FIGURES 24 – 28 ); cephalic projection very high ( Figs. 29–30 View FIGURES 29 – 33 ); pronotum with a smooth midlongitudinal line; presence of pronotal prominence (Figs. 1 –5, 7– 10); flattened anteromedian angle of metasternum ( Fig. 52 View FIGURES 49 – 52 ); tibiae very broad in both sexes ( Fig. 22 View FIGURES 21 – 23 ); protibia with ventral carina simple in both sexes and with apical tuft of setae without apparent sexual dimorphism ( Fig. 22 View FIGURES 21 – 23 ); protibial spur only slightly curved at apex ( Figs. 22 View FIGURES 21 – 23 , 46 View FIGURES 34 – 48. 34 ); elytral striae carinulae extending at most only to midlenght of elytron ( Fig. 37 View FIGURES 34 – 48. 34 ); and phallobase with a narrow apical membranous area ( Fig. 53 View FIGURES 53 – 56 c). Despite this extensive list of similarities, several morphological and biogeographical differences convincingly demonstrate the validity of each of these two species.

Morrone (2001, 2006) recognized four subregions of the Neotropical region (Caribbean, Amazonian, Chacoan, and Parana), each them divided into several provinces. Gromphas lemoinei   and G. aeruginosa   inhabit northern South America, but have widely separated distributions. The former species occurs in the Venezuelan Coast and Venezuelan Llanos provinces of the Caribbean subregion, while the latter species is widely distributed in eight provinces of the Amazonian subregion and in the north of Chaco province of Chacoan subregion. Nowhere are these two species found in sympatry; in fact, they are separated by large physiographic barriers such as the Guiana Shield and the Orinoco River. This geographical separation certainly has contributed to the emergence and maintenance of the morphological distinction between them.

Characteristics of the tegument also separate these two species. The punctation in the center of metasternum and along the sutural margin of the elytra is very sparse in G. aeruginosa   and seen only in unwarn specimens; in G. lemoinei   , however, this punctation is much denser and clearly evident. Regarding the pronotal granulation, in G. aeruginosa   , the squamous granules of the lateral region become progressively finer and sparser toward the center of the pronotum; in G. lemoinei   , on the other hand, the density of granulation is always very high across the pronotum, except within the smooth anterior concavities and along the midline. The presence of posterior pronotal fossae also distinguish these two species: in G. lemoinei   , larger specimens have no trace of these fossae, which are apparent in smaller specimens; in G. aeruginosa   , the fossae are always present regardless of specimen size.

The elytral striae are also distinct: in G. aeruginosa   , the interstriae are flat and in the same plane as the striae, whereas in G. lemoinei   the interstriae, especially the more mesial ones, are slightly convex at the base and the striae appear furrowed to the naked eye. This furrowed appearance gives the impression of a more elongate elytra in G. lemoinei   than in G. aeruginosa   .

Finally, there is a difference between these two species also in the medial sclerite. While in G. aeruginosa   the curvature is mainly downwards ( Fig. 57 View FIGURES 57 – 62 ), in G. lemoinei   this sclerite is flatter, wider and very much more strongly curved to the side ( Fig. 58 View FIGURES 57 – 62 ). However, these two forms are clearly more similar to each other than to the other species of Gromphas   .

Comments: The presence of G. lemoinei   in San Fernando de Apure is inferred from the geographic distribution of G. aeruginosa   presented by Barattini & Saénz (1960, 1964). These authors regarded the latter species (which does not occur in Venezuela) as a senior synonym of the former, but it is likely that these data refer to G. lemoinei   .

Bionomics: Noriega (2002) found five specimens of G. lemoinei   (cited as G. aeruginosa   ) on the floodplain of Rio Duda, La Macarena, Meta, Colombia; the only other species of Scarabaeinae   found by him in this place was Sulcophanaeus leander (Waterhouse, 1891)   . According Noriega (personal communication) these two species share the same activity time and the same food resource. As G. lemoinei   is found only in savannas, open areas and river sandbanks and never enter in the forest, it is possible that this species use the rivers and their banks as corridors from the savannas of the Llanos Orientales to inside Amazon region in Colombia (Noriega, personal communication). Noriega also reported that all specimens collected by him were associated with cattle ( Bos indicus Linnaeus, 1758   ), capybara ( Hydrochoerus hydrochaeris (Linnaeus, 1766 ))   , or crocodile ( Crocodylus intermedius Graves, 1819   ) dung.

Based on the specimens examined in this study, G. lemoinei   seems to be active throughout the year, as is G. aeruginosa   . The recorded months are January, March, June, July, September, November, and December. 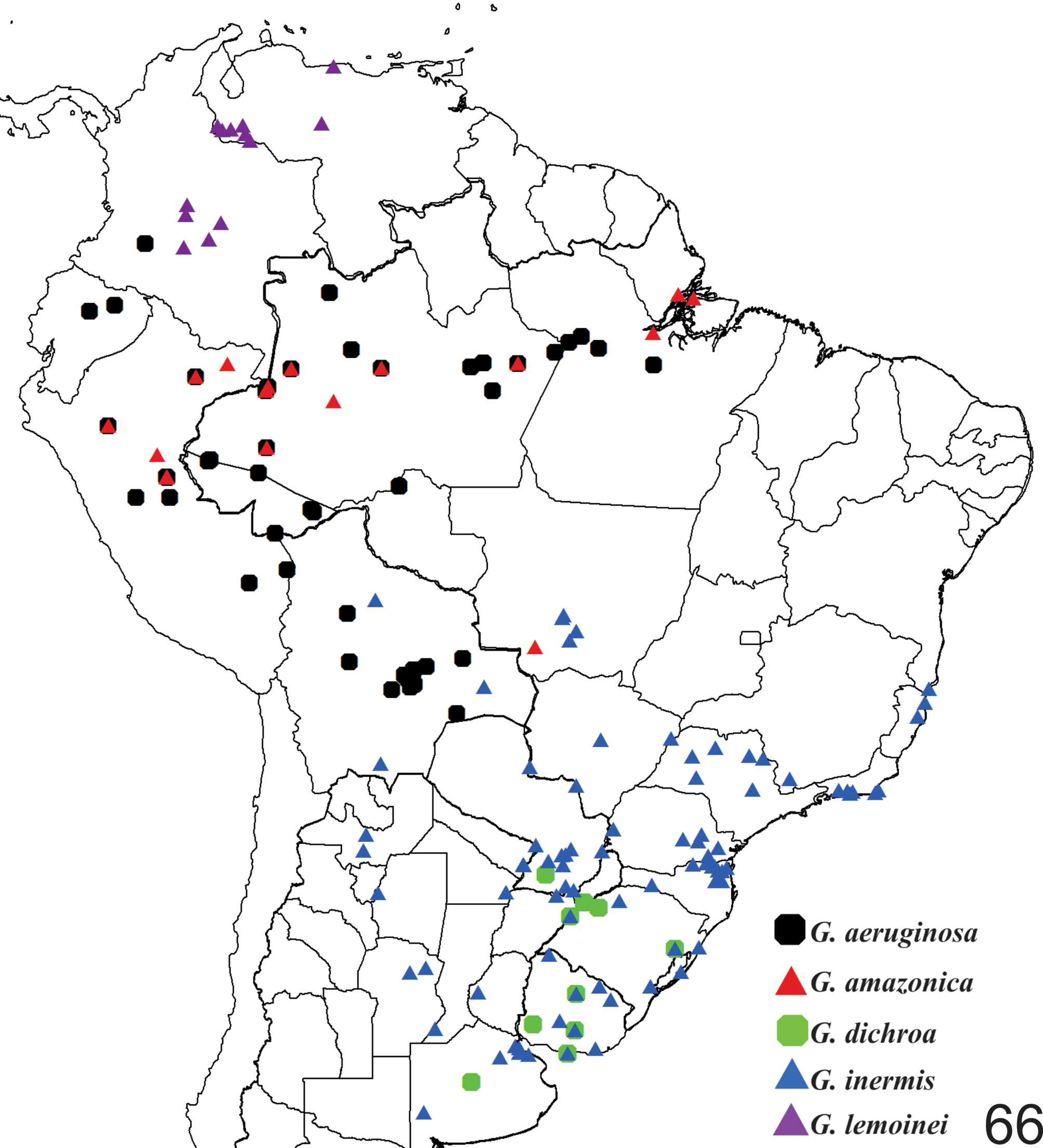