There are two subspecies recognised for Gretna balenge   : the nominate subspecies which Holland (1891) described from Benita, Gabon, occurs from Nigeria to Uganda, western Tanzania, much of DR Congo, and north-western Zambia, while ssp. zowa Lindsey & Miller   was described from Liberia and is found from Sierra Leone to the Volta area ( Lindsey & Miller 1965, Larsen 2005). In Tanzania, ssp. balenge   is now known from Bukoba, Kigoma and Mpanda.

Adult behaviour. Carcasson (1981) notes that it flies at both dawn and dusk. Larsen (2005) reports ABRI collectors catching this species coming to ‘various kinds of foul bait’ near collecting camps in Cameroon and Central African Republic. In TCEC’s experience this is not a true forest species, but occurs wherever palms grow, including open situations on river banks, etc.

Food plants. TCEC has reared this species from Raphia farinifera   in Tanzania, and Eremospatha sp.   rattan palms in north-western Zambia. The latter is the climbing palm food plant in Zambia referred to by Larsen (2005) and Vande weghe (2010). Motshagen (2013) has reared it from the ornamental Madagascan palm Dypsis lutescens   in his garden at Port Harcourt, Nigeria ( Figure 37.3 View FIGURE 37 ).

Ovum. The ovum ( Figure 38 View FIGURE 38 ) is very large, even for a palm-feeding skipper. It is rounded, wider than high, the widest part being at slightly less than half the height. The surface is covered with faint, irregular polygons dorsally, merging into irregular faint striations laterally.

Leaf shelters. TCEC noted that the final instar caterpillar makes a tube by folding a leaflet, and eats its way down towards the base. A leaf shelter on Dypsis lutescens   photographed by D. Motshagen in Nigeria ( Motshagen 2013) is shown in Figure 40.1 View FIGURE 40 ; it appears to have been made from a single leaflet, folded under, with feeding from both lamina basal to the shelter, cutting the mid rib, and the distal part of the shelter trimmed; the result is a sealed chamber which hangs from the leaflet and will soon dry out and turn brown due to the cut midrib. Further observations on shelter construction and feeding patterns would be useful to test this interpretation.

Caterpillar. The newly hatched caterpillar ( Figure 39.1 View FIGURE 39 ) eats the whole of the egg shell and then spins a shelter in which it moults without feeding. Figure 39 View FIGURE 39 shows a caterpillar trying to make a shelter between the bottom and side of the plastic rearing container (behind which a leaf has been placed). Normally, this behaviour would pull closed a leaf shelter made from a single leaflet, but because the container is rigid, the caterpillar remained in view where it could be photographed. It does not start to eat the palm leaf until it has changed into the second instar ( Figure 39.2 View FIGURE 39 ).

Pupa. The pupa is very unusual in having a pair of large, elaborate processes frontally on the head, reminiscent of the head of an ant lion ( Figure 41 View FIGURE 41 ). The upper part is in two halves, each arising just above the eye, and extending dorsally well above the head, and spreading laterally and anteriorly in a broad but narrowing arc, the points ending up directed towards each other, separated by about the width of the lower part, but well above and anterior to it; this lower part projects forward to a pair of points separated by a broad, smooth notch; just ventrally and laterally to the base of this lower part is a small tuft of erect setae ( Figure 41.6 View FIGURE 41 ). There is a similar tuft on the anterior margin of the eye, centred on a small projection ( Figure 41.4–5 View FIGURE 41 ). When disturbed, the pupa vibrates violently and rattles quite noisily against the sides of the shelter, behaviour probably to deter predators or parasitoids. We think the rattle is made by the frontal processes striking the sides of the shelter, not the thoracic segments, and the vibration is a result of flexing the abdominal segments, but we do not have specific observations on this.

Discussion. This skipper and its life history are remarkable in several ways. It is amongst the largest of African skippers, ‘a monster of a butterfly, possibly the most muscular of all African butterflies’ ( Larsen 2005). The caterpillar, covered with white waxy powder, forming projections based on the long setae, is unique amongst African skippers known to us. The complex frontal projections of the pupa are unparalleled in our experience, while the pupa’s ability to vigorously vibrate in its shelter has not been noted in other African skippers.

The nearest parallel that we are aware of is the Asian species Gangara thyrsis   ( Hesperiinae   , incertae sedis), which is a large, polyphagous palm feeder, described in detail by Bell (1925). It too has a caterpillar covered with white waxy powder, which forms projections ( Figure 42.1 View FIGURE 42 ). The mature caterpillar makes an unusual pupal chamber by rolling one or two palm leaflets in a spiral, forming a rigid tube ( Figure 42.3 View FIGURE 42 ), and within this, when disturbed, the pupa ( Figure 42.2 View FIGURE 42 ) vibrates rapidly and violently, drumming against the sides of the shelter, which is certainly a deterrent to an inexperienced predator (or indeed entomologist in MJWC’s personal experience), and may also be a behaviour to crush any intruding predator or parasitoid insect (note the heavily chitinized spurs laterally before the cremaster, discussed under Zophopetes cerymica   above). 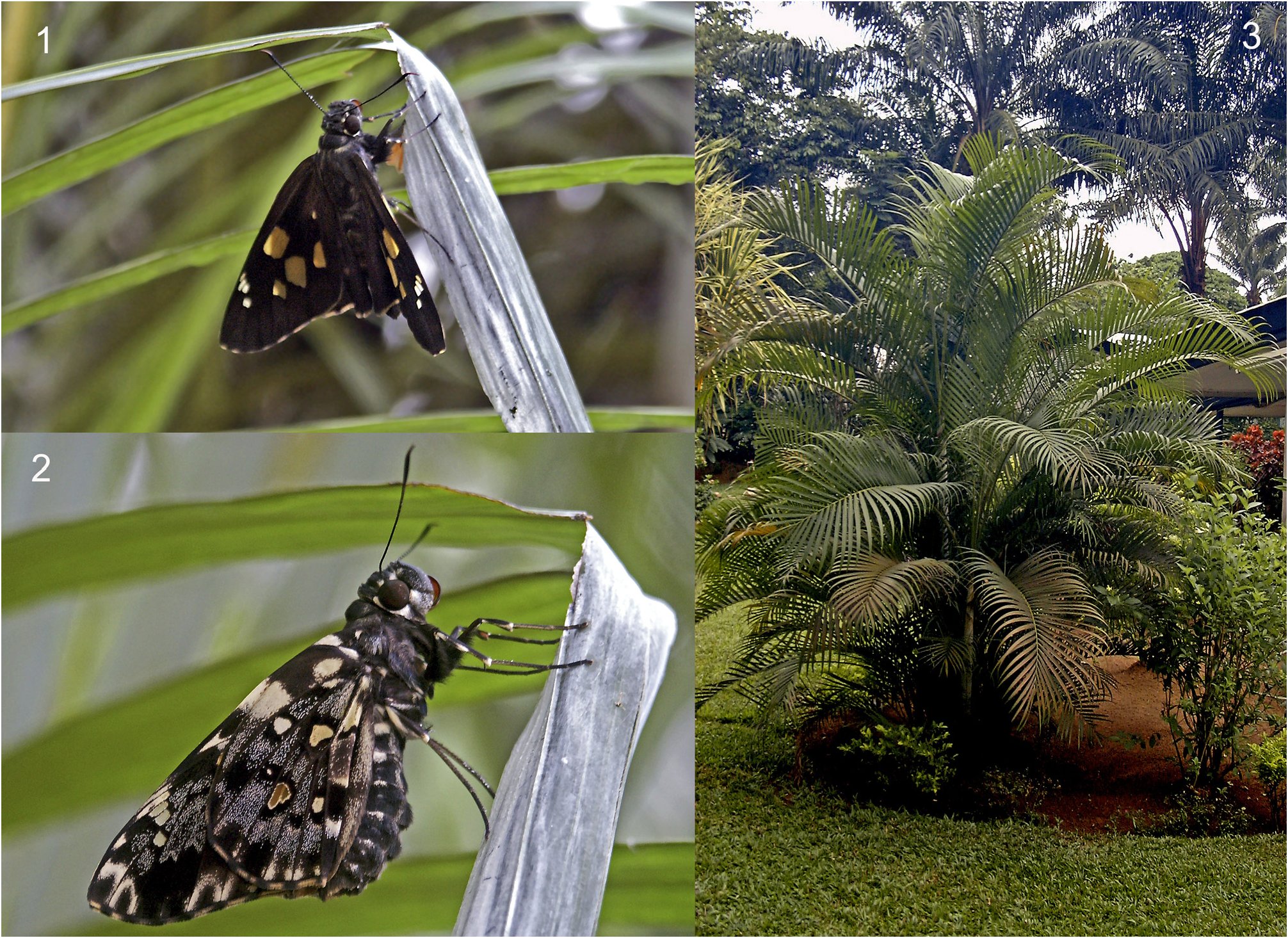