The specific epithet refers to the Cordillera del Cóndor, where the type was collected. The mountain range name in turn comes from “condor” based on “kuntur” (Quechua) and refers to the Andean condor ( Vultur gryphus   L.), an important part of the ecology and culture of the Andes.

The new species mostly occurs at 800-1000 m in dense, low, wet forest and sclerophyllous scrub over nutrient poor, acidic, sandstone-derived soils. Such habitats resemble those in the Guiana Highlands occupied by D. yutajensis   . The three well-separated localities (Cordillera del Cóndor, Cordillera Escalera, Cerro Teyu; Fig. 1 View Figure 1 ) are discoveries due to recent exploration in remote sub-Andean cordilleras, and continued floristic work is likely to extend its range to similar habitats further south in Peru. Floristic affinities between the Cordillera del Cóndor and Cordillera Escalera are notable ( Neill et al. 2014). Flowers and fruits were collected during September-November and flowers in March (also fruits in July fide Croat 91402, not seen). Dendrothrix yutajensis   with more collections to finely document phenology, is reproductive from November to May and appears to flower and fruit continuously during this period.

Following the criteria and categories of IUCN (2012), D. condorensis   is given a preliminary status of Vulnerable (VU) under geographic range criteria B2 area of occupancy <2000 km2 (B2a, known to exist at no more than 10 locations; B2b, continuing decline projected). Threats to this taxon in the Cordillera del Cóndor include mining for the underlying silica sand. The Cordillera Escalera is protected as a conservation area.

The four species of Dendrothrix   are morphologically similar, and major differences are presented in Table 1. Dendrothrix condorensis   and D. yutajensis   are likely closely related as they have nearly identical floral features. However, they are easily distinguished by foliar characters (i.e., size, shape, thickness, and details of leaf architecture), seed caruncle differences, and biogeography. Although leaf architecture has not been rigorously compared through clearings and anatomy, several orders of the varyingly prominulous venation are evident in unprepared specimens that allow gross comparisons such as were shown by Esser (1993) to be informative for the group. In D. condorensis   , secondaries are 18-22 pairs, mostly straight with few course deflections, and distally curving upward for <1/4 of course; intersecondaries are rare, and tertiaries are percurrent (Fig. 3G View Figure 3 ). In D. yutajensis   , secondaries that are fewer (usually 7-9 pairs), not straight due to a slight zigzag (fractiflexuous) appearance where tertiaries diverge, and distally curving upward for half of their course; intersecondaries and frequent, and tertiaries are reticulate (Fig. 3J View Figure 3 ). Even on unusually robust specimens of D. yutajensis   (e.g., Maguire & Maguire 35103, US), the largest leaves (16.5-18 × 6.5-7.8 cm) have only up to 11 pairs of secondaries. The leaves of D. condorensis   more closely resemble those of D. multiglandulosa   Esser with which it shares the generally larger blades and percurrent venation. Dendrothrix multiglandulosa   is only known from two collections from the Cuao-Sipapo massif in Venezuela and potential variation is poorly understood. Dendrothrix yutajensis   is the most frequently collected and wide-ranging species of Dendrothrix   , known from many well-separated tepuis, but intraspecific variation appears low. Dendrothrix wurdackii   Esser has previously unrecognized intraspecific variation with an odd collection (i.e., BRAZIL, Pará: km 872 Cuiabá-Santarém [Highway], Serra do Cachimbo, forest beside small stream, 6 Nov 1977, G. Prance 24947, MO, NY, US), having much larger (to 18 × 8.5 cm), long acuminate, glabrous leaves with poorly developed abaxial micropapillae as compared with the four other collections of the species that closely resemble the type. This collection, which Grady Webster annotated as a new species of Senefeldera   Mart., clearly has closest affinities with D. wurdackii   based on similarities in leaf shape and venation, basilaminar glands, pistillate sepal shape, and biogeography. While the morphological differentiation and slight disjunction (Fig. 1 View Figure 1 ) may be significant, it is not to the degree used here to justify the recognition of D. condorensis   and I have refrained from further taxonomic adjustments until D. wurdackii   is better understood.

Leaf micromorphological features are similar among the taxa of Dendrothrix   . The distinctive, loosely attached, branched trichomes (Fig. 3E, K View Figure 3 ) are structurally very similar but can differ in pigmentation (rusty brown versus whitish; see Table 1). Epidermal microrelief such as micropapillae or striations that give an often light-colored, matte sheen to abaxial leaf surfaces has evolved in many genera of Euphorbiaceae  , including Dendrothrix   , and other hippomanoids (e.g., Gymnanthes hypoleuca   Benth., Sebastiania larensis   Croizat & Tamayo, Senefelderopsis croizatii   Steyerm.). The microrelief likely has functional significance related to optimized stomatal conductance and reduced leaf wetting ( Neinhuis and Barthlott 1997). The morphology of the leaf micropapillae in Dendrothrix   is unusual and may be synapomorphic. They have positional size variation in being short to absent on major veins and grading to longer in intercostal regions (Fig. 3K View Figure 3 ). In D. condorensis   , the micropapillae are finger-like, 25-30 μm tall, ornamented with ridges, and form a protective canopy that obscures the stomata (Fig. 3H-I View Figure 3 ). Epicuticular waxes are not well developed, in keeping with the non-glaucous appearance. The stomata are only abaxial, with the adaxial surface being relatively featureless (Fig. 3I View Figure 3 ). Glands are often present on leaves and/or inflorescences of Euphorbiaceae  , and Dendrothrix   is no exception where they occur in pairs at the base of the leaf and subtending the bracts. The nature of scattered laminar glands in Dendrothrix   is partly unclear. In the case of D. wurdackii   they resemble typical Euphorbiaceae  laminar glands with a well defined raised border and an abaxial distribution adjacent to secondary veins towards the leaf margin. The glands on Prance 24947 contain drops of clear exudate that are still sticky after 40 years. I have not found clearly homologous structures on the other taxa of Dendrothrix   . Circular to widely elliptic, small (<0.5 mm diameter), gland-like structures with smooth surfaces and without raised edges are sparsely present in D. condorensis   and more abundantly so in D. multiglandulosa   , where in the latter they were considered of systematic significance ( Esser 1993). Although not examined anatomically, these appear to be wound response to microbial damage rather than typical glands as evidenced by their absence in the few young leaves available, erratic distribution, the presence of apparently intermediate epidermal blistering stages that are clearly necrotic, and margins that are not clean under SEM (not shown) but rather contain fragments that suggest micropapillae residue from surficial degradation.

Among reproductive characters that are variable among the species are details of the pistillate flowers including sepal and stigma morphology (see Table 1). Staminate bract glands vary in number with Dendrothrix multiglandulosa   usually having 2-3 pairs (variable from 1-4, and paired or unequal in number between the bract sides), while the other species have one pair ( D. yutajensis   rarely has a second gland on one side, e.g., Maguire & Maguire 35103, NY). Inflorescence branching is potentially variable, with 2-3 orders for D. condorensis   and D. multiglandulosa   , and the other species have only two orders. It is unclear if this represents noteworthy interspecific variation or possible collector bias for smaller inflorescences that better fit herbarium sheets. Dendrothrix   is characterized by staminate flowers with two connate anthers (Fig. 4D-E View Figure 4 ). Rare flowers with three anthers are present on collections of D. condorensis   (i.e., Neill & Quizhpe 14939, MO) and D. yutajensis   (i.e., Maguire & Maguire 35103, NY). Such flowers have more or less symmetrical androecia, connate filament columns, partial third sepals, and developed pollen, which indicates they may be functional despite being teratological in gross structure (Fig. 4F View Figure 4 ). The triandrous flowers may be of significance in reflecting the likely plesiomorphic condition for the tribe and the ease of merosity change even in groups that appear fixed. The bract glands are smooth and without pores (Fig. 4B-C View Figure 4 ). The staminate sepals bear stomata and are externally minutely papillose (Fig. 4A View Figure 4 ). The pollen of Dendrothrix   (Fig. 4G View Figure 4 ; Esser 1994) is tricolporate with a perforate exine, which closely resembles that of other Hippomaneae (see Park and Lee 2013). Seed variation occurs among the taxa of Dendrothrix   (Fig. 3A-D View Figure 3 ) with a wider, more globose seed in D. multiglandulosa   , and a well-developed caruncle in D. wurdackii   . In D. yutajensis   the caruncle is small, and there is no caruncle in D. condorensis   or D. multiglandulosa   . The 13 available seeds of D. condorensis   from dehisced fruits (some slightly immature; note lighter brown coat in Fig. 3B View Figure 3 relative to other samples) do not show evidence of caruncle growth (Fig. 3F View Figure 3 ), while all seeds that I examined of D. yutajensis   have a small caruncle.

Dendrothrix   has a noteworthy Guiana Shield disjunct distribution (Fig. 1 View Figure 1 ), which now combines two patterns with its over 1000 km distant outliers including elements in both the Andean (i.e., D. condorensis   ) and Amazon (i.e., D. wurdackii   ) phytogeographic regions. Such a tripartite distribution does not appear to be shared with other Guiana Shield near-endemic plant genera, although many have disjunct species in just one of those regions ( Berry and Riina 2005). Raveniopsis   Gleason ( Rutaceae  ) also has a distribution of Guiana Shield endemics and two Brazilian Amazon lowland outliers, and interestingly, one of the few localities of D. wurdackii   ( Calderón et al. 2682, NY) is also the type locality for one of those outliers, Raveniopsis campinicola   Kallunki ( Calderón et al. 2722, US). 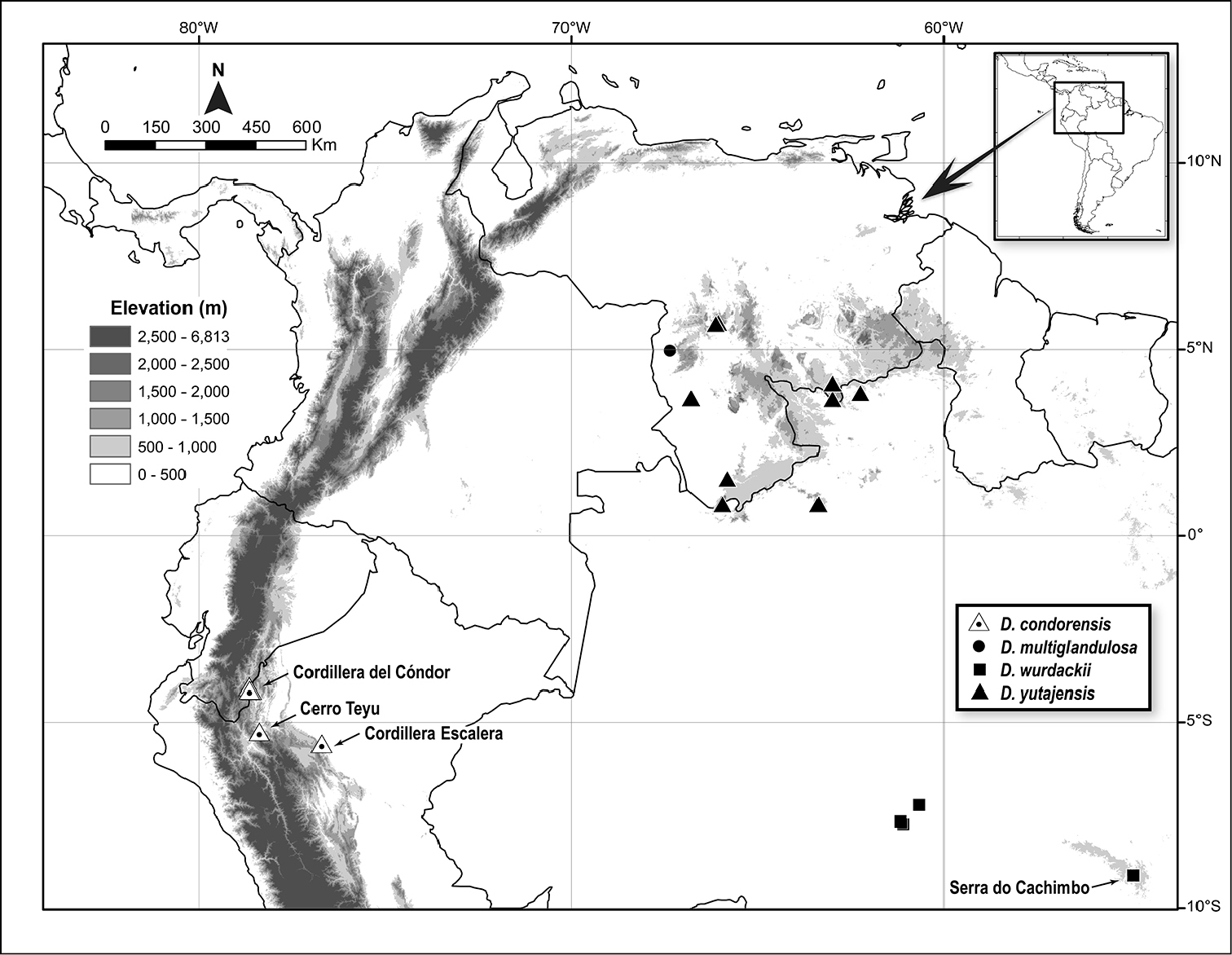 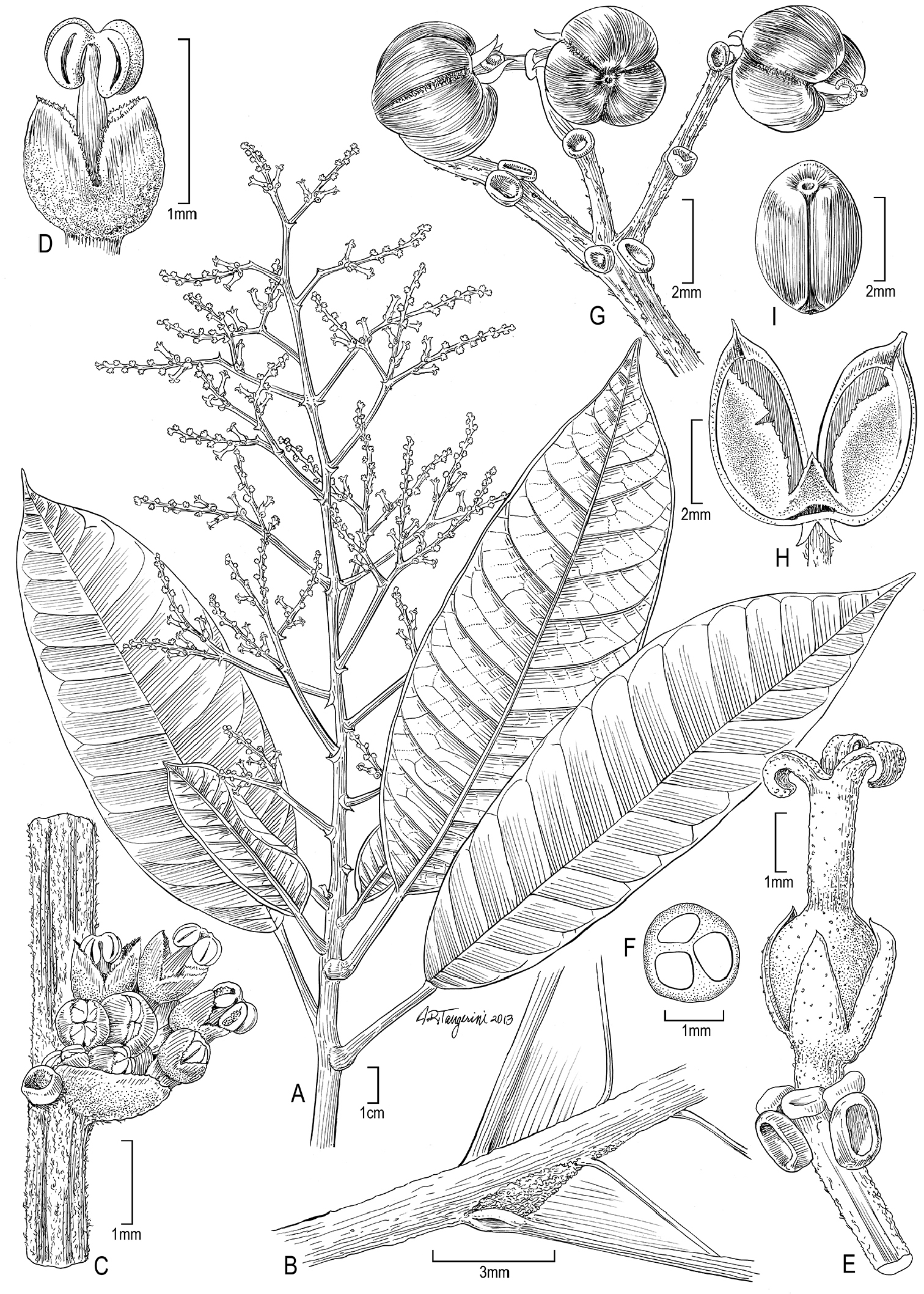 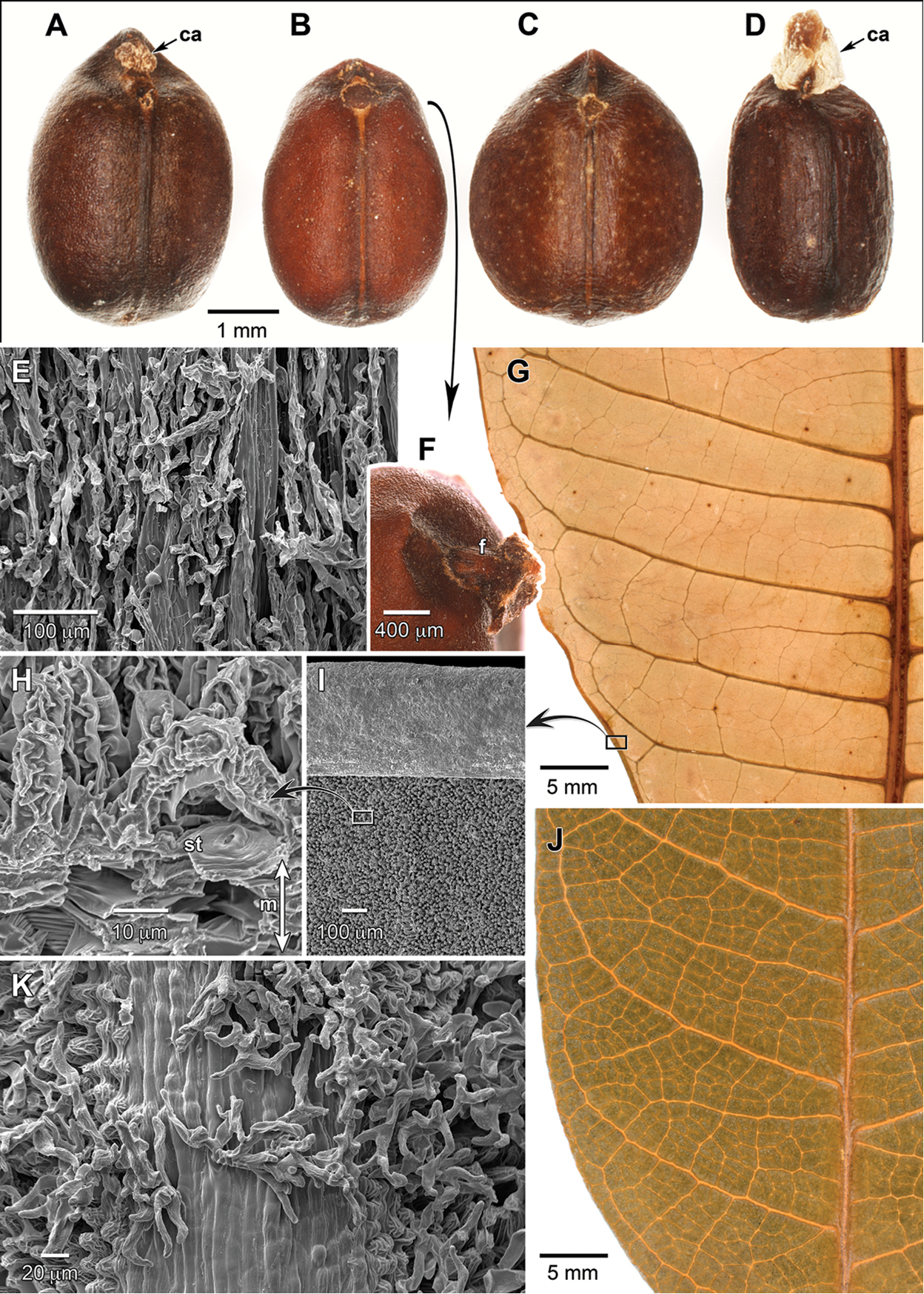 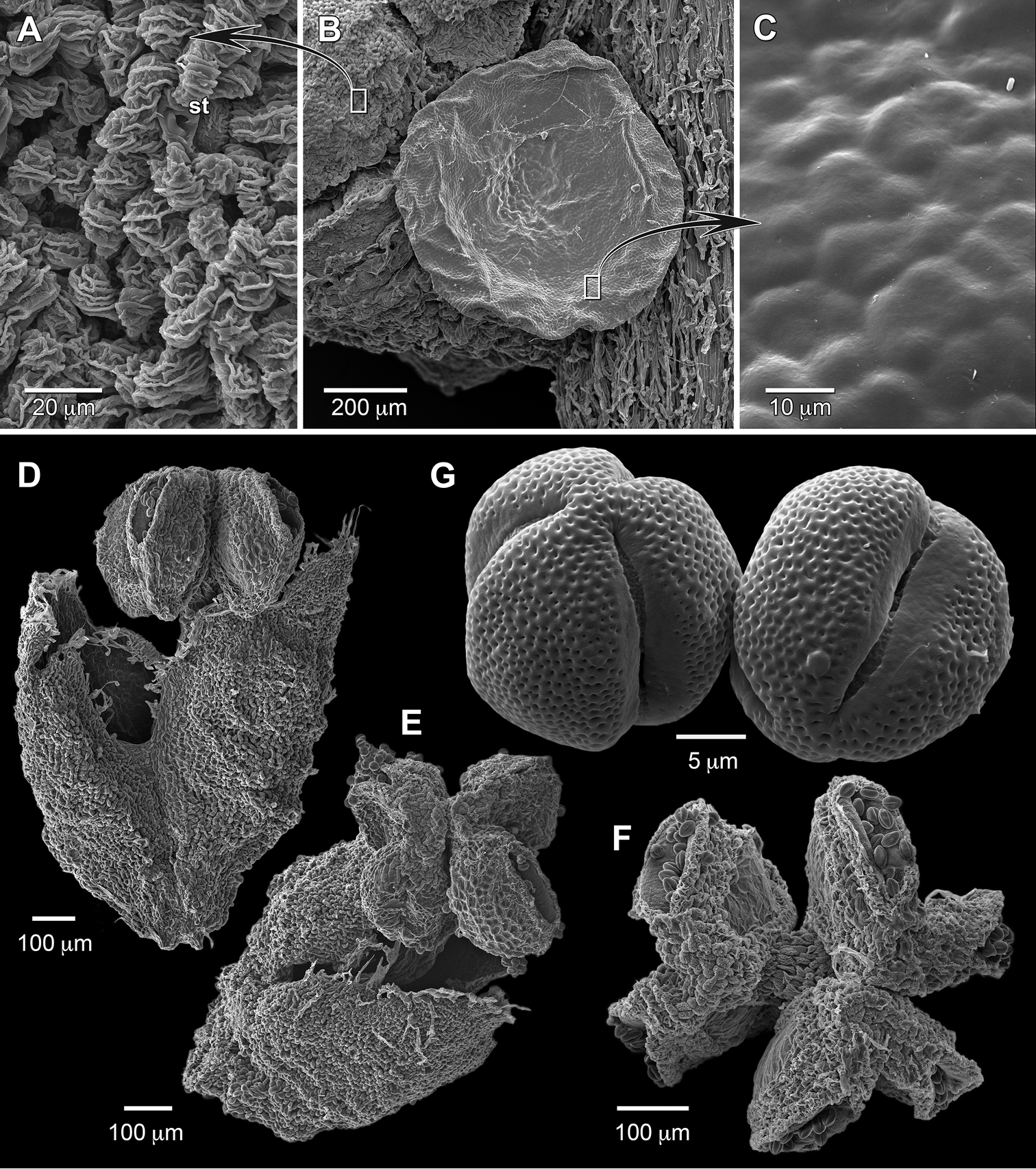