External features ( Figure 1 A, B View FIGURE 1 ): The proboscis is 7 mm long and 4 mm broad, round in cross section but with a distinct middorsal longitudinal groove. The collar is 4 mm long and 3.5 mm broad. The genital ridges commence about 8 mm behind the collar. Ventral muscular ridges are absent from the trunk.

Internal features ( Figure 2 View FIGURE 2 ): There is a fairly conspicuous circular muscle fiber layer in the proboscis, which is four to five fibers in thickness. The nerve fiber layer is thickened middorsally. The proboscis epidermis is about 200 µm thick. The longitudinal muscle fibers are arranged in 8 to 10 concentric rings. The proboscis cavity extends almost to the tip of the proboscis as a narrow lumen lined by connective tissue cells and circular fibers. The dorsal groove of the proboscis is lined by a glandular epithelium ( Fig. 2A View FIGURE 2 ). The right and left halves of the glomerulus are confluent over the tip of the stomochord at the cardiac vesicle, and also meet along the midventral line. The stomochordal lumen extends nearly to its tip. There is a single midventral caecum in the stomochord lumen. Anterior to the midventral caecum, the stomochord has a deep dorsal pit descending into its dorsal wall. The ventral and dorsal septa are absent. The proboscis skeleton has an anterior marginal middorsal spine projecting forward into the stomochordal tissue ( Fig. 2B View FIGURE 2 ). The keel of the skeleton may or may not be sharp but is deep, and short in the antero-posterior direction. The left proboscis canal is rather long, in the form of a narrow tube. At about the level of the skeletal plate, the left proboscis canal tends to occupy a middorsal position. Only the left proboscis pore is present ( Fig. 2C View FIGURE 2 ).

The perihaemal cavities extend into the peduncle, stopping short of the proboscis pore by about 180 µm; they are confluent anteriorly ( Fig. 2C View FIGURE 2 ). There is no neuropore on either ends of the collar. Both the dorsal and ventral collar mesenteries are complete. The collar epidermis is about 500 µm thick. The neural crest on the collar nerve cord appears at about the middle of the collar ( Fig. 2D View FIGURE 2 and inset). The septum separating the perihaemal cavities also extends anteriorly up to this level. At its commencement the neural crest is low and does not reach the basal membrane of the epidermis dorsally. But a little distance posteriorly it comes in direct communication with the epidermal nerve layer through a break in the basal membrane of the epidermis. The skeletal cornua reach almost to the posterior margin of the collar. They are confined to the dorsolateral aspect of the buccal cavity throughout ( Fig. 2D View FIGURE 2 ). Peribuccal cavities extend only a short distance into the collar as triangular spaces on either side of the collar lumen. The collar canals are almost vertical in their disposition ( Fig. 2E, F View FIGURE 2 ). At the posterior end of the collar there is sometimes a middorsal narrow, deep groove entirely lined by mucus secreting cells, which appear stainless in section ( Fig. 2G View FIGURE 2 ).

The branchial part of the pharynx is equal to or slightly larger than the ventral part. The tongues and septa are all in one plane. The nuclei in the ciliated branchial epithelium are disposed in several strata. Gonads, which are not lobed, appear about 1 or 1.5 mm behind the collar. The gonadal pores appear to be opposite and parallel to the branchial pores and they do not alternate. Ventral longitudinal muscle fibers of the trunk, though heavily developed, do not form ventral longitudinal ridges ( Fig. 2H View FIGURE 2 ).

Remarks. The nearest relationships of the form under consideration are with S. rhabdorhynchus   , S. horsti   and S. otagoensis   , which it resembles in several characters such as the narrow proboscis coelom, several strata of nuclei in the ciliated branchial epithelium, unlobed gonads and the extent of the skeletal cornua in the collar. But in the possession of a dorsal pit on the stomochord and in the appearance of the genital ridges rather far from the collar (8 mm) the present species differs from all other species of the genus. Among the Saccoglossus   species occurring in the Eastern Pacific region, it resembles in a few characters S. pusillus   (complete dorsal and ventral mesenteries in the collar; extent of the skeletal cornua in the collar), besides being closely related to S. rhabdorhynchus   ( Table 1). In view of these considerations it is necessary to recognize it as a new species.

Etymology. The trivial name is derived from the fact that the stomochord bears a pit on the dorsal side. 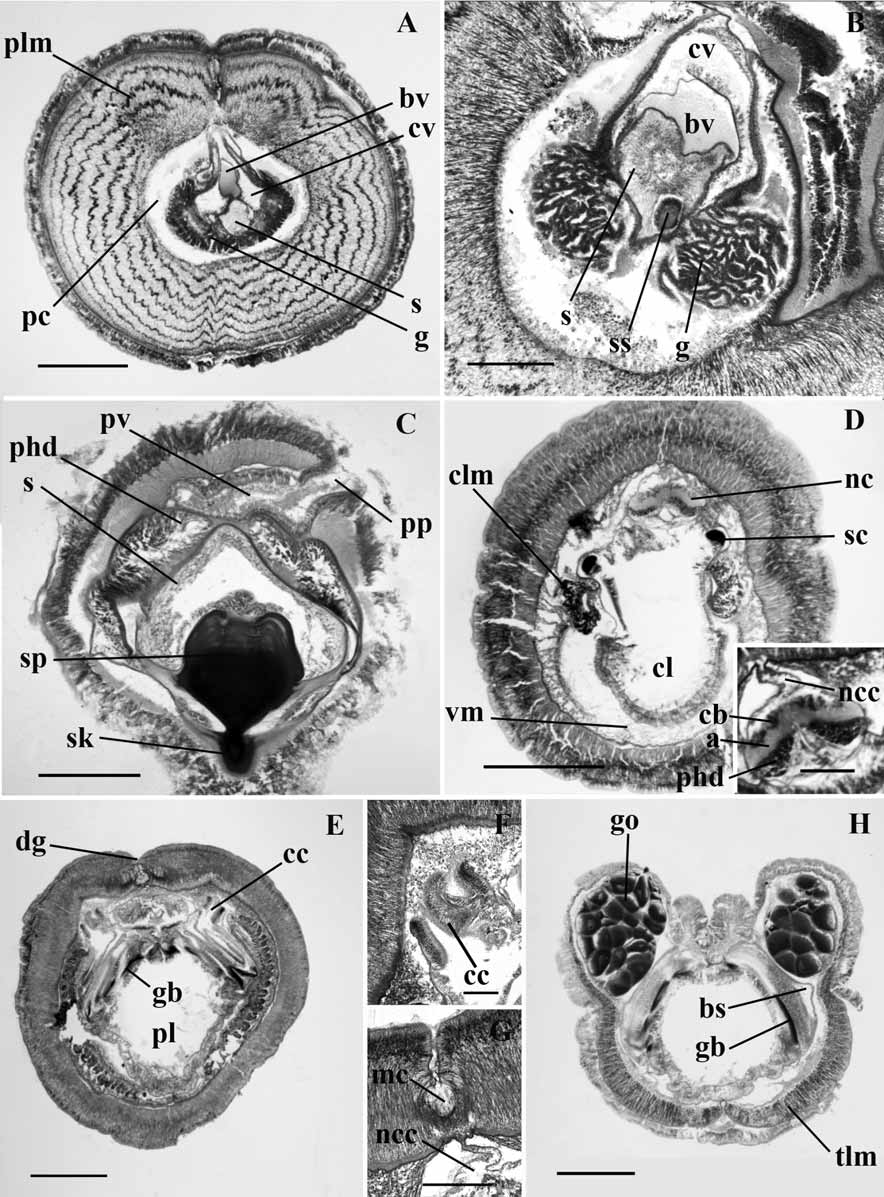