Mandibles ( Fig. 26 View Figs 22–38 ) shaped as in O. gilli , ochre-testaceous to mahogany-testaceous in male, usually darker in female, brownish-testaceous, subsymmetrical, each mandible with four teeth (and basal molar), their mutual size as in O. gilli .

Thorax. Pronotum ( Figs 30–34 View Figs 22–38 ) similar to that of O. gilli , but much darker and always at least slightly longer than wide, length 1.60–1.90 mm, width 1.40–1.80 mm, and the transverse rugae on disc are generally denser, covering wider area and becoming shallower only in juxtanotopleural areas; coloration in the holotype and most adults from the type locality dark metallic-copper with only indistinct green-blue sublateral areas, rarely bright reddish-cupreous in middle; all thoracic sterna glabrous; prosternum, mesosternum and metasternum smooth, metallic black with strong green, blue or violaceous lustre; proepisterna smooth, metallicblack with cupreous lustre; mesepisterna and metepisterna metallic black with cupreous or greenish lustre, metepisterna indistinctly coriaceous-wrinkled; female mesepisternal coupling sulci unrecognizable, in form of longitudinal sulcus only somewhat deeper than in male.

Legs. Coxae in both sexes with pro- and mesocoxae yellow to testaceous, with only a few setae, metacoxae black with metallic-blue lustre and testaceous apices with only one central seta (lateral setae entirely absent); trochanters yellow-testaceous in both sexes, glabrous (except for usual easily abraded apical seta); femora yellow to testaceous, dorsally with feeble mahogany lustre, in female only slightly darker, mahogany-testaceous; femoral surface with only very sparse, short and indistinct, white to brownish semierect setae; tibiae concolorous with femora and with similar sparse setae except for dense pad of greyish setae on basal third to half of pro- and mesotibiae; metatibiae with only sparse, semierect, short and stiffer setae; tarsi brownish-testaceous and usually black-darkened, first three tarsomeres in male generally almost black with moderate dilatation and usual dense pad of short greyish-white setae.

Variability. As stressed in the description and as obvious from the illustrations, the holotype and adults from the type locality are generally much darker coppery coloured, usually with only indistinctly green-blue sublateral areas, while the adults from Altos de Campana (particularly females which are usually notably larger) generally differ in having more conspicuous contrast between the reddish-cupreous elytral disc and iridescent green-blue lateral and apical areas, but two adults from Darien are even more brightly coloured than some males from Altos de Campana ; the elongate sublateral elytral impressions are usually deeper in the holotype and adults from the type locality; elytral apices in males (independent of the locality) are rather variably rounded, or subacute; there exists only slight variability in the shape of the labrum, independent of the locality.

Differential diagnosis. Odontocheila fraternum sp. nov. possesses almost identical shape of its aedeagus and labrum as in O. gilli , and adults (particularly females) from Altos de Campana may resemble it also due to rather similar (although darker) body coloration. Nevertheless, the new species immediately differs not only in the darker body coloration (much more distinctly in the holotype and adults from the type locality), but particularly in its elytral surface with much coarser punctate to cristulate-punctate sculpture covering whole elytral length, and possessing additional, longitudinal sublateral impressions (particularly deeper and therefore more conspicuous in adults from the type locality) forming uneven elytral surfaces. Moreover, the elytra of the new species possess humeral macula, the pronotum is slightly narrower, the labrum in both sexes paler, in female with only black-brown basal area, and both maxillary and labial palpi including penultimate (longest) palpomeres of labial palpi in female are much paler (lacking blackish areas present in female of O. gilli ); the tarsi are much darker, but all other leg segments are generally paler than those in O. gilli .

Due to the coarse punctate-cristulate elytral sculpture the new species may resemble O. quadrina Chevrolat, 1835 , a taxon described from Mexico, the type of which is not preserved, and which is considered by some authors (recently by ERWIN & PEARSON 2008) as a synonym of O. mexicana Laporte de Castelnau, 1834 . However, this taxon immediately differs from O. fraternum sp. nov. in having smooth, shiny pronotum, even elytral surface, and very different shape of its labrum and aedeagus.

Etymology. Dedicated to the second author’s two brothers, Andrew and Michael Duran. The three Duran brothers collected tiger beetles together on several occasions, including a trip to Altos de Campana. Most importantly they have helped the second author with their lifelong friendship.

Distribution and habitat. Known from three disjunct localities in Panama. The type locality is located in the southeastern Darien province, adjacent to the Colombian border, whereas the only other known populations occur at Altos de Campana and Cerro Jeffe in the province Panamá.Adults occur along light coloured heavy clay trails and openings through rainforests, above 500 m. When disturbed they are quick to alight on adjacent vegetation. 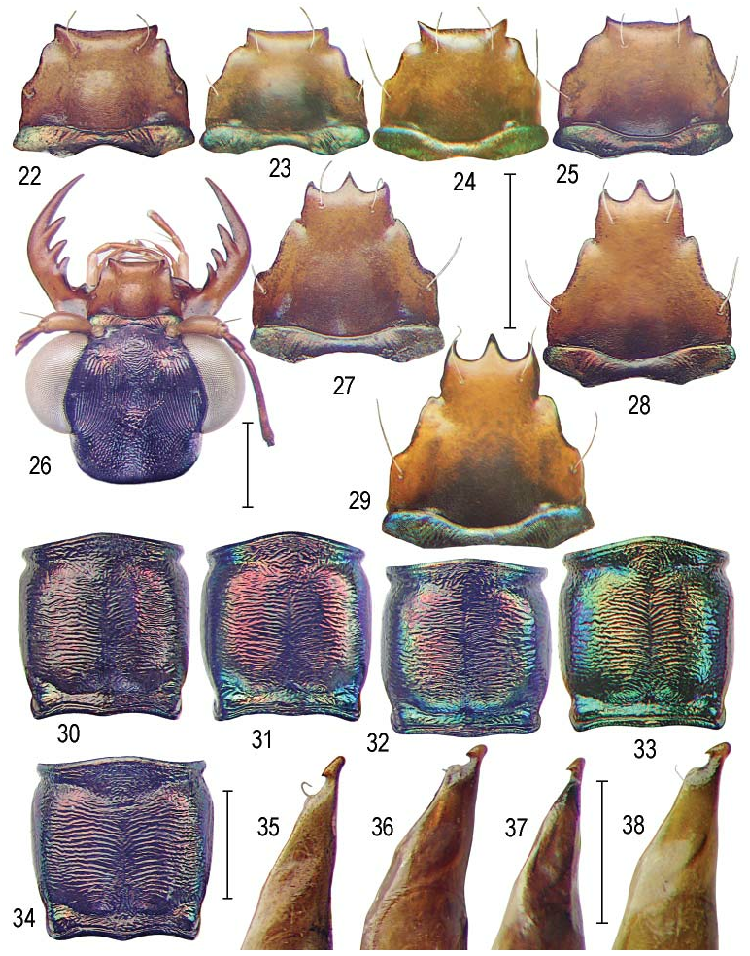