Tonatia bakeri is distributed from southeastern Mexico southward into South America to northwestern Ecuador, northern Colombia, and northern Venezuela (west and north of Cordillera de Mérida). The southernmost records of the species are located in the Province of Esmeraldas, Ecuador (Fig. 7 View Figure 7 ).

Tonatia bakeri is distinguished from T. bidens and T. maresi mainly by craniodental and external measurements. Tonatia bakeri is larger than any other species within the genus ( Williams et al. 1995; Table 2 View Table 2 ). The measurements that explain most of the variability are postorbital constriction length, mastoid width, and upper canine width. The skin around the mouth, nose leaf, and warts of the lower lip presents a light coloration. The posterior edge of the cranium presents an acute apex, the mandibular condyles are robust, the diastema between the canine and first lower premolar is absent or not evident, and clinoid process is well developed (Figs 3a, c View Figure 3 , 4a, c View Figure 4 ). Measurements of the holotype taken from Williams et al. (1995), as well as averages of the external craniodental and external measurements of the specimens analyzed in this study, are presented in Table 2 View Table 2 .

The holotype has bicolored gray-brown dorsal fur with dark tips; hairs behind ears and neck are bicolored with white bases, and are overall slightly lighter than the rest of the dorsum. Hairs on shoulders are gray-brown, presenting white bases and tips (tricolored). The hairs on the top of head have white tips forming a pale stripe between the ears. Ventral pelage is paler than dorsal pelage; hairs are fawn with lighter tips, but around the throat the fur has a lighter and more uniform color. Dorsal and ventral pelage is dense. Dorsal hairs are longer (12.0 mm) than ventral hairs (5.0 mm). The proximal third of the forearm is covered by short hair (the ventral surface is more densely furred than dorsal), as well as base of the thumbs and proximal side of the feet. The proximal ventral margins of the uropatagium and wing membranes have sparse short hair. The skull of the holotype is complete and in perfect condition, presenting a well-defined sagittal crest.

Tonatia bakeri and T. maresi differ from T. bidens in the presence of a clear line of short fur on the top of the head between ears, a secondary process in the mastoid that partially obscures the base of the bulla (unique within subfamily Phyllostominae ), a larger gap between lower canines, a lower crowded appearance of the premolars, and a narrower postorbital constriction. Tonatia bakeri differs from T. maresi in its narrower breadth across the lower incisors ( Williams et al. 1995), presence of an acute apex in the posterior edge of the braincase due to the presence of a well-developed sagittal process, robust mandibular condyles, a reduced or absent space between the canine and the first lower premolar, observable in the mandible body (lateral view), and a well-developed clinoid process (Figs 3a, c View Figure 3 , 4a, c View Figure 4 ). Additionally, T. bakeri specimens are larger than those of T. maresi (Table 2 View Table 2 ).

The name bakeri was coined in recognition to Robert J. Baker for his contributions to the genetics and systematics of the family Phyllostomidae ( Williams et al. 1995).

Little is known on the natural history of the genus Tonatia . It has been reported that it uses hollow trees as day roosts, within which forms monospecific groups, or multispecific groups with other bat species ( Williams and Genoways 2008). The diet of Tonatia includes arthropods, fruit, and small vertebrates ( Tirira 2017). 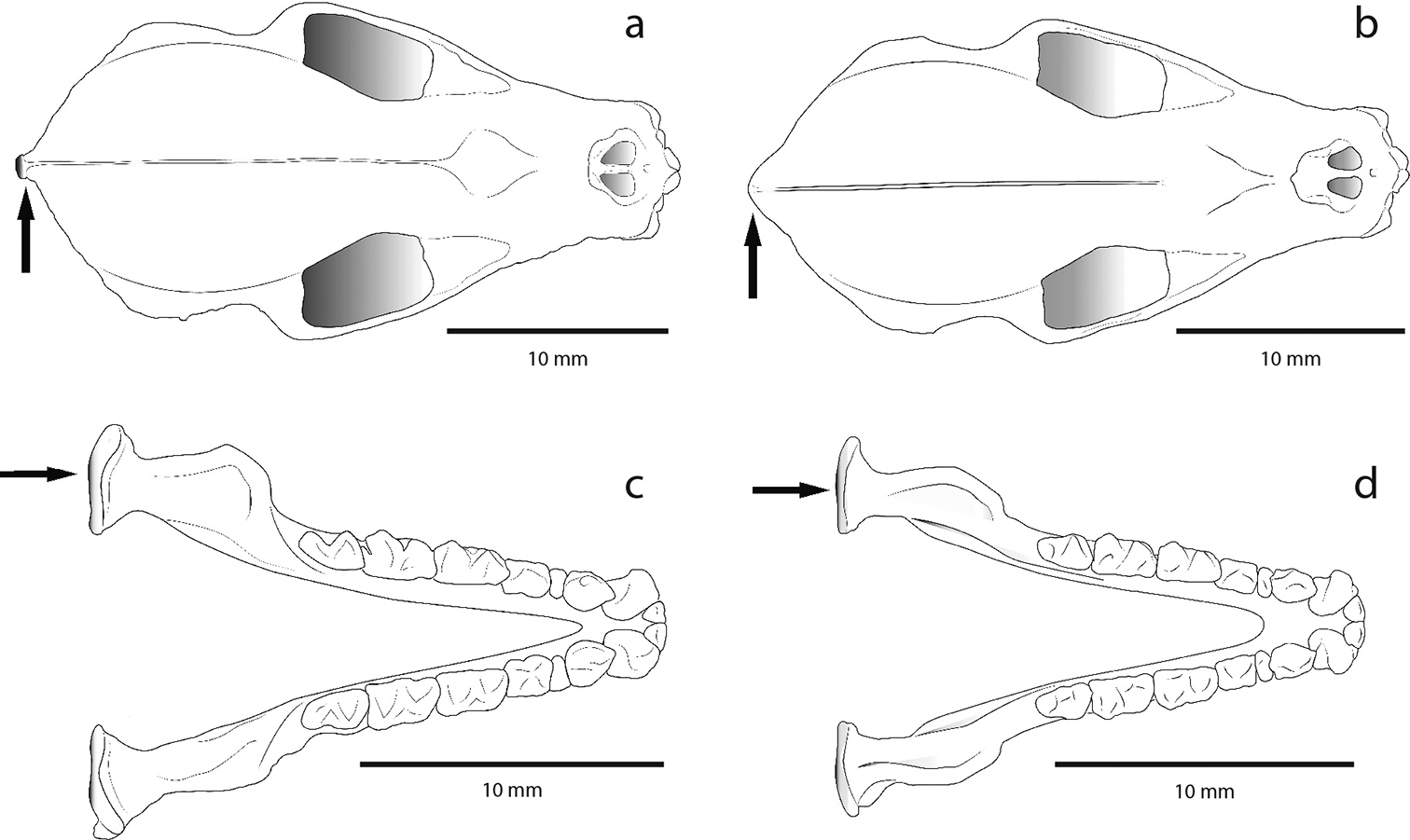 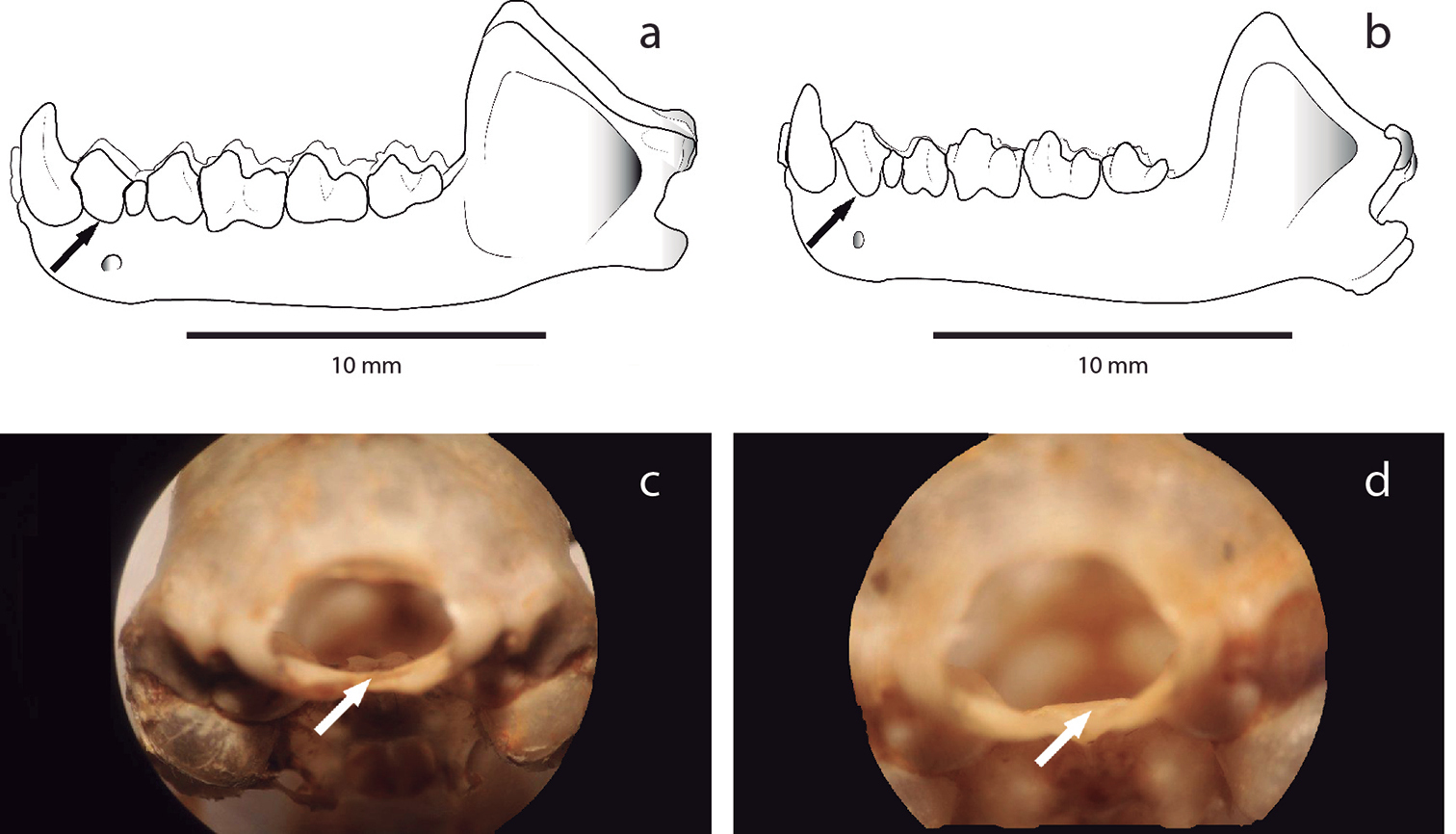 Figure 4. Differences in the separation of the canine with respect to the first premolar, and the development of the clinoid process between Tonatia bakeri and T. maresi. Illustrations of the lateral view of the mandible, arrows indicate the separation between the canine and the first premolar in a T. bakeri and b T. maresi. In the posterior basioccipital view, arrows indicate the clinoid process in c T. bakeri (QCAZ 9754) and d T. maresi (QCAZ 4972). 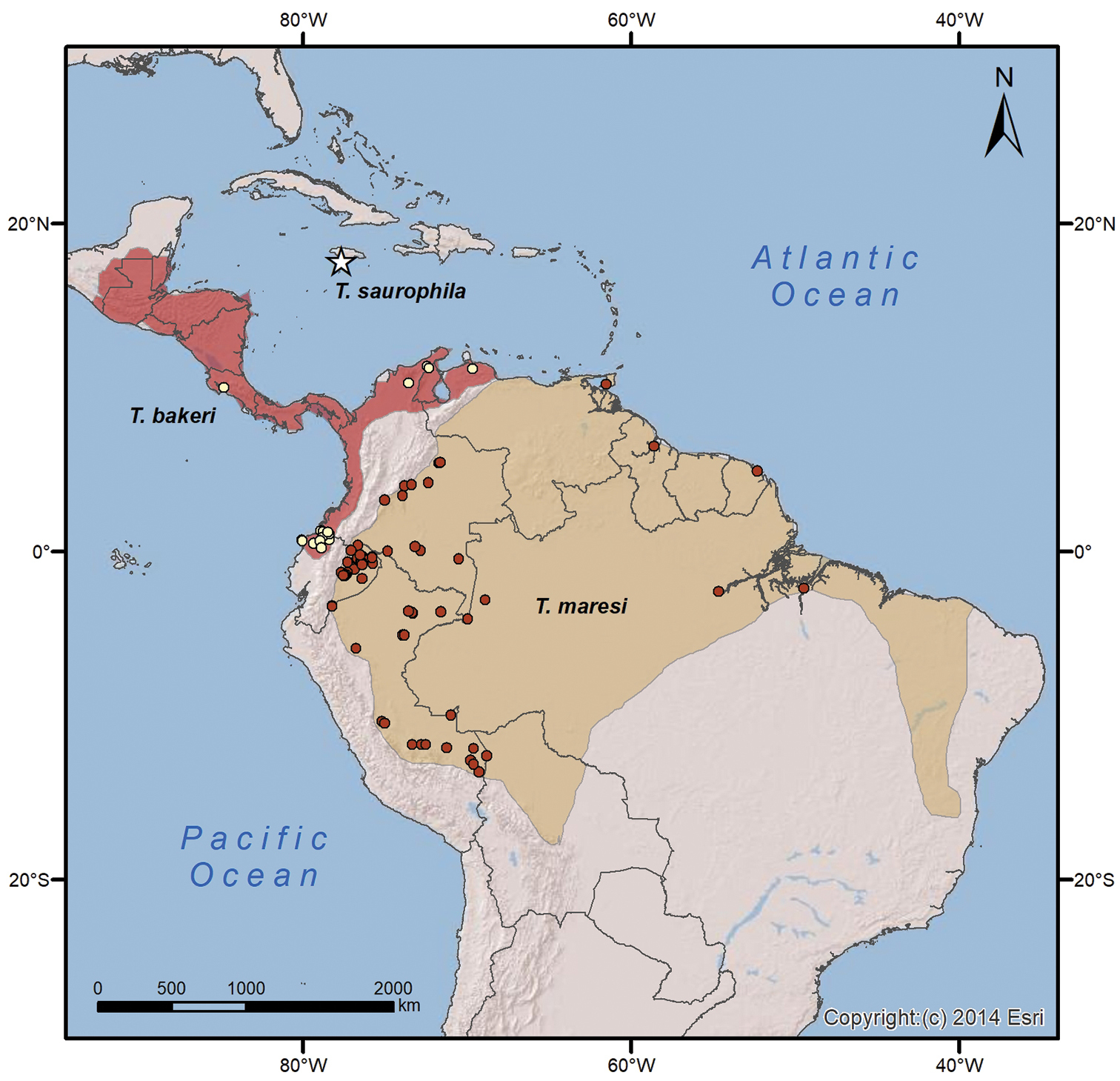 Figure 7. Geographic distribution of Tonatia saurophila †, T. bakeri, and T. maresi. Map of Central and South America showing the geographical distribution of T. saurophila † (subfossil records, Jamaica, type locality), T. bakeri, and T. maresi. Modified from Williams and Genoways (2008), and based on the localities of the specimens included in this study.