Etymology. This new species is named after the province in China where the type series was collected.

Diagnosis. A species from the australis group with a black frons, an ochre yellow thorax, a hyaline postcubital vein (CuP) and a transversely striped abdomen. Male terminalia species-specific.

Remarks. Resembling P. vulpianus by its size and colour but the lower surface of the frontal callus only diffuse brownish, not black with a pale midline. The frons above the frontal callus distinctly broader, not lineshaped. Abdominal tergite 5 with relatively broad anterior and posterior yellow margins whereas conspicuously black and narrowly yellow only along the anterior margin in P. vulpianus . The male genitalia globose and more prominent than in the latter species, markedly different. From the other species of the australis group possessing the surstyli P. fukienensis sp. nov. differs mainly by a pair of slightly convergent slender processes at the middle of the posterior margin of the genital capsule ( Fig. 10 View FIGURES 8 – 10 ).

Etymology. The species is named after the country where the holotype was collected.

Diagnosis. The frons, vertex and entire occiput are black and black haired. The thorax is yellow and the wing venation of the plesiomorphic type (with sinuate M 3 and a well pigmented postcubitus), the legs are yellow, only the tarsi partly darkened and the hind tibiae black. The hind tibia is flattened and somewhat curved in the middle. The abdominal pattern is considerably reduced. The male terminalia are speciesspecific.

Abdomen ochre yellow, with black apex beginning from segment 5. Dark pattern on yellow part is limited to basal half of tergite 1, with small and diffuse medial spot and a narrow, nearly semicircular marking at posterior margin of tergite 2. Tergite 4 with a transverse diffuse medial spot in anterior third and partly darkened posterior margin. Sternites 1–3 yellow, only sternite 1 black basally and sternite 4 with a large angulate marking leaving only broader anterior and narrower posterior margin yellow.

Remarks. Very probably a member of the cingulatus group, with the same wing venation (including the type of radial triangle) and probably the same leg colouring. Also the shape of the male terminalia (especially the essentially tube-like aedeagal complex) indicates a distinct relationship. The depression in the middle of hind tibia may represent only an individual variation and not a species-specific character. 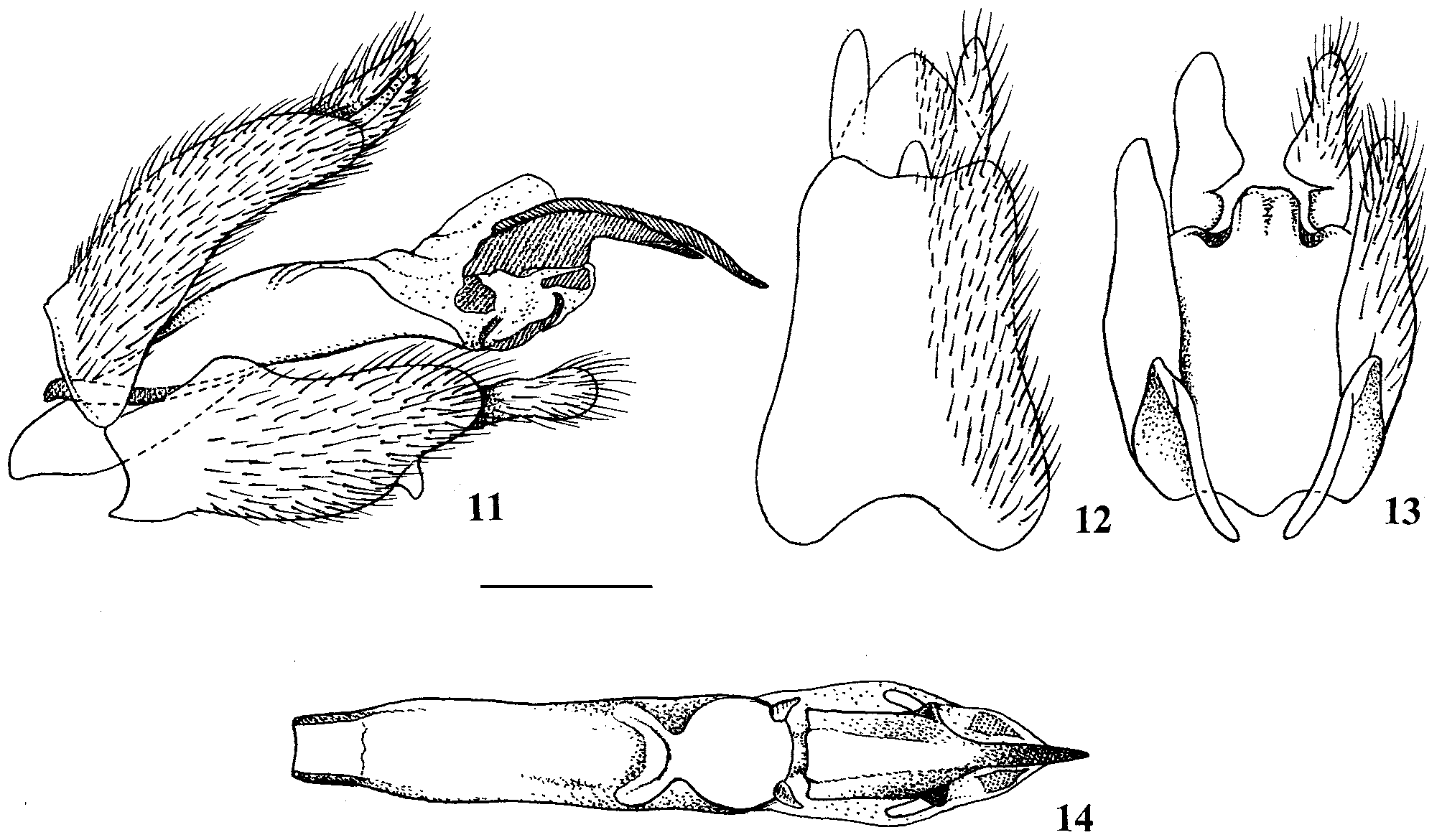