Evans (1937) described this species from Mt Kenya, and attributed to it a few additional specimens from Congo, Uganda and Tanzania. Evans also described a second subspecies, nyika Evans, from Kusungu, Mt. Malawi , but Larsen (2005) indicates this is a separate species. A disjunct population in Nigeria and / or Cameroon may represent a separate species or subspecies ( Larsen 2005). De Jong (1976) illustrates the male genitalia of the nominate subspecies.

Widespread in the highlands of Kenya, this is more of a mountain species than perhaps any other skipper in Kenya. MJWC has found it on the Escarpment side of the Aberdares on the lower side of the rain forest, and through most of the rain forest on the North-east side of Mt Kenya . He has not seen adults on the Ngong Hills, near Nairobi, but collected two caterpillars there close to the highest parts in October 1989 ( MJWC 89 /72). Kielland (1990) associates this species with ‘highland open habitats, montane forests and riversides from 1000 to 2700 m’ in Tanzania .

Adult behaviour. The adults seen in Kenya ( Figure 4 View FIGURE 4 ) were found beside the road in open parts of the forest. They sunbathe resting on vegetation and come to flowers.

Food plants. Unfortunately, when MJWC collected the two caterpillars on Ngong Hills, two grasses, Helictotrichon elongatum and Ehrharta erecta (identified as var. abyssinica ), were mixed together. The food plant is at least one of these (probably E. erecta ) or perhaps both. In captivity the caterpillars accepted Cenchrus trachyphyllus (= Pennisetum trachyphyllum ) as well as an unidentified lawn grass (referred to locally as 'Karen grass'). Larsen (1991) reports the food plants as ‘various grasses’ and includes MJWC’s unconfirmed record from Ehrharta . Subsequently, he gives the food plants as ‘Poaceae’ ( Larsen 2005).

Leaf shelters. The fourth instar caterpillars made a leaf roll with the apical part of a leaf rolled downwards, and fed basally to this.

Pupa. The pupa is 16mm long with a short blunt, slightly upturned frontal spike 1.6mm long, 1.0mm wide at base; proboscis sheath to end of wings only; cuticle transparent; slightly darker dorsal line from frontal spike to cremaster; pale yellow subdorsal line on thorax of 89/72 A but not 89/72B; pale dorsolateral line from T2 to A 8, which may be yellowish on thorax; one or two whitish lateral lines on abdomen; individual 89/72B also has an interrupted weak dark line from head above eyes, to small dark spiracle T1, to base of wings. The body contents show through as light green becoming pale yellow ( Figure 6 View FIGURE 6 ) and then showing the adult colouring. The pupal stage lasts about 12 days. 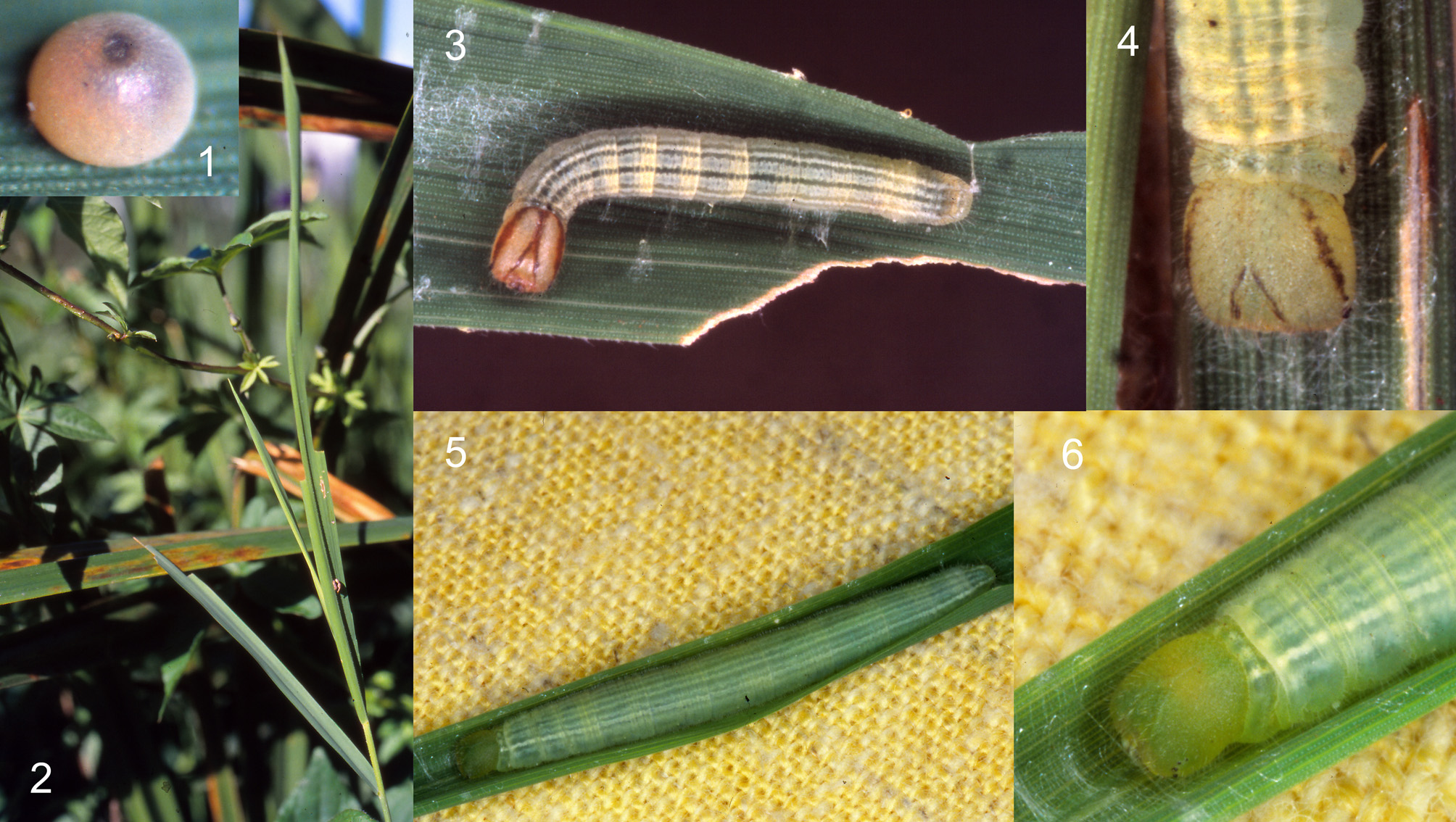