Diagnosis. Xerophasma can be distinguished from all other subgenera of Perdita by the enlarged ocelli (each about 1/5 to 1/3 width of interocular distance at level of median ocellus) and from all except some members of the subgenus Alloperdita Viereck , (restricted to the eastern United States) by the small triangular, petiolate submarginal cell intercalated between the two submarginal cells normal for Perdita . This third submarginal cell is likely a derived character not homologous to the second submarginal cell found in many Andrenidae ( Michener 2007) . It is unclear whether it is a synapomorphy for the two subgenera ( Danforth 1996, Michener 2007). In Xerophasma , the body color is largely pale caramel-colored, with extensive dark markings on the head and mesosoma in some species, and all species have some degree of light to dark brown tergal banding.

Variation. Occasional specimens of P. vespertina and P. celadona are missing the petiolate intercalated submarginal cell on one or both wings. Such specimens of P. vespertina from Riverside, Nevada, May 1983 are as follows: 3 females and 1 male missing on left wing only, 1 female incomplete on right wing only, 2 females with incomplete right and missing left, 1 female incomplete left, 4 males missing cell on both wings. One P. vespertina male from Mesquite, Nevada 1998 is missing the third submarginal cell on both wings .

Distribution. Previously known only from the Sonoran and Chihuahuan Deserts ( Timberlake, 1953, 1954, 1958), Xerophasma is now known to occur in the Colorado Plateau and the Mojave Desert and on the western margin of the Great Plains ( Figs. 26–28 View FIGURES 26–28 ). All Xerophasma are crepuscular visitors to Onagraceae of the genera Camissonia and Oenothera in desert and semi-desert regions of southwestern North America. They are frequently found associated with sand dunes and vegetated sands. 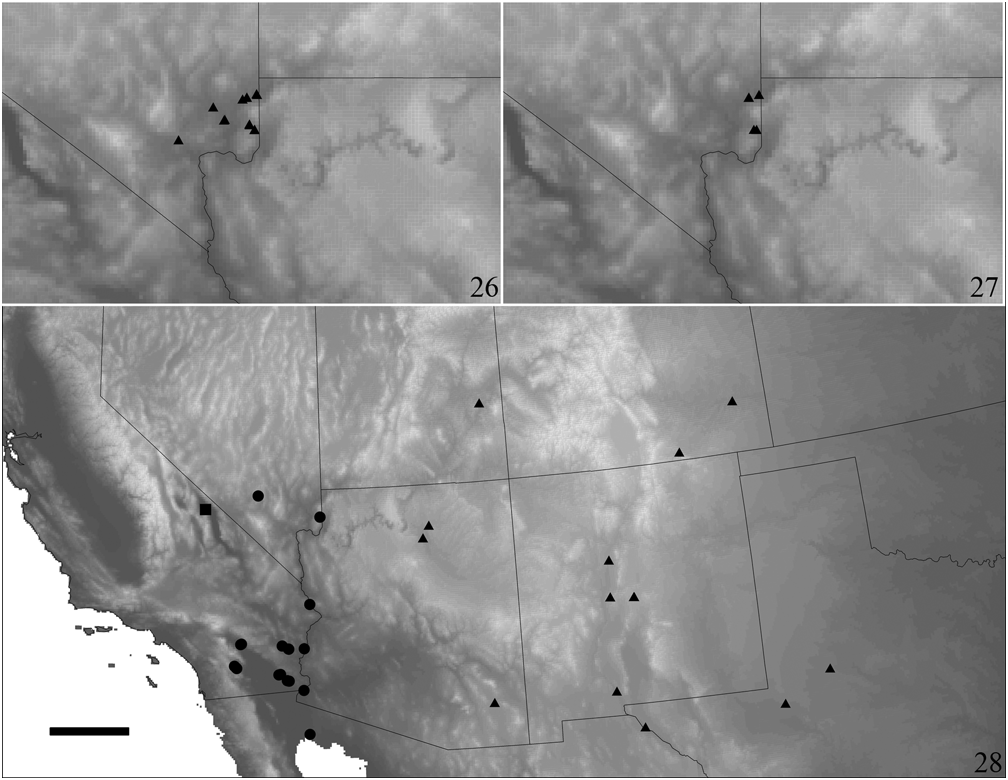