posterior portion of the ischiatic process is herein proposed as an autapomorphy for A. minimus   .

The shape of the pelvic bone of the species of Acestrorhynchus   is similar to that described by Weitzman for B. meeki   (1962: 42, fig. 21), and consists of a rod-shaped element with a flat bony lamella along its medial margin that gradually tapers anteriorly. Lateral to the rod-shaped element there is a similar, but less-developed, bony lamella that extends anteriorly up to approximately half of the length of the pelvic bone.

The presence of a long anteroventral projection on the ischiatic process has been proposed as a synapomorphy for a clade comprising Phenacogaster   , the Cynopotaminae (sensu Menezes, 1976), Acanthocharax   , Charax   , and Roeboides (Lucena, 1998)   . In the present study a similar process was observed in Astyanax   , Moenkhausia   , and Tetragonopterus   . In some species of Acestrorhynchus   (e.g. A. altus   , A. britskii   , A. falcatus   , and A. pantaneiro   ) there is a very short projection ventrally on the ischiatic process; however, the projection is never as developed as the process present in the aforementioned taxa, and in addition it is somewhat variable inter- and intraespecifically. Therefore, the condition in Acestrorhynchus   was coded as state 0.

A median bony lamella is present in all examined characiforms except Boulengerella   , Hepsetus   , Hoplias   , Hoplerythrinus   , and Hydrolycus   . In all these taxa, however, the distal portion of the first anal-fin pterygiophore is not expanded, thereby differing in shape from the distal portion in the Acestrorhynchus species   that lack a median bony lamella. Despite this difference in these bones, all these taxa were coded as lacking a medial bony lamella on the proximal radial of the first anal-fin pterygiophore. The lack of this lamella is proposed as a synapomorphy for the clade formed by A. grandoculis   , A. microlepis   , and A. minimus   under both of the hypotheses derived from the present analysis.

Epurals are laterally compressed bony elements situated on the dorsal portion of the dorsal-fin skeleton between the urostyle and last neural spine ( Weitzman, 1962: fig. 15). In characiforms the number of epurals varies from one to three ( Roberts, 1969: 428).

All species of Acestrorhynchus   possess two epurals ( Fig. 23 View Figure 23 ). One specimen of A. nasutus   (MZUSP 47698) has one epural, but its distal tip is bifurcated, and all other examined specimens of this species have two epurals, so therefore the condition for this species was coded as 1. All examined outgroups also possess two epurals except for Hepsetus   and Boulengerella   , with three, and Hoplias   , with one. Although Hydrolycus tatauaia   has three epurals, all other Hydrolycus species   , Cynodon   , and Rhaphiodon   have two epurals. H. tatauaia   was hypothesized to be more derived relative to the remaining species of Hydrolycus   (Toledo- Piza, 2000), and the condition in Hydrolycus   was therefore coded as 1.

Four different types of contact between hypurals 2 and 3 were observed among the examined taxa. In Charax   , Boulengerella   , Hoplias   , and Moenkhausia   these two elements are separated by a gap along most of their adjacent margins, in a manner similar to that illustrated by Roberts for Hepsetus   , Ctenolucius   , Hoplias   , Salminus   , and Hydrocynus   ( Roberts, 1969: figs 56–60) (state 0). In Cynopotamus   , Roeboides   , Oligosarcus   , and Xenocharax   hypurals 2 and 3 are in contact anteriorly, but posteriorly their margins gradually diverge, leaving a space between these two ossifications (state 1). In Acestrorhynchus   and the Cynodontinae   there is no gap between the adjacent margins of hypurals 2 and 3, and these elements are either in close contact along their entire length (state 2) or are fused (state 3). A small notch is usually present at the posteroventral margin of hypural 3 (when the margins of hypurals 2 and 3 are not fused) or in the posterior margin formed by the fused hypurals 2 and 3, but this notch does not extend anteriorly to form a gap between the two elements, as in state 1. The fusion of the adjacent margins of hypurals 2 and 3 along most of their lengths was proposed as a synapomorphy for the Cynodontidae   plus Acestrorhynchidae ( Lucena & Menezes, 1998)   . These two elements are fused in all cynodontines with at least some degree of fusion already present in relatively small specimens ( Toledo-Piza, 2000: 50). In Acestrorhynchus   there is both ontogenetic and interespecific variation in the degree of fusion between hypurals 2 and 3, and other features of the caudal fin in the genus were described by Miquelarena (1982: 288). In small specimens of all species, these two elements are autogenous (i.e. it is still possible to observe the limit between the two hypurals). In larger specimens of A. falcatus   and A. falcirostris   the suture between the hypurals is still present. These sutures are also evident in species that achieve only relatively small body sizes as adults, such as A. minimus   and A. nasutus   . In A. grandoculis   there is some degree of fusion, with at least part of the adjoining edges between these bones not evident; the same condition being present in the remaining Acestrorhynchus species.   Roestes   and Gilbertolus   have autogenous hypurals 2 and 3, and a small notch at the posteroventral portion of the latter element. The condition in these taxa is, however, more similar to that of Acestrorhynchus   than to species coded as state 1. Therefore these species were also coded as state 2, in agreement with Lucena & Menezes (1998: 264). The condition of hypurals 2 and 3 in contact along their entire margins, but not fused to each other, is herein interpreted as synapomorphic for the clade formed by A. falcirostris   , A. isalineae   , and A. nasutus   , with independent acquisitions in A. falcatus   and A. minimus   . 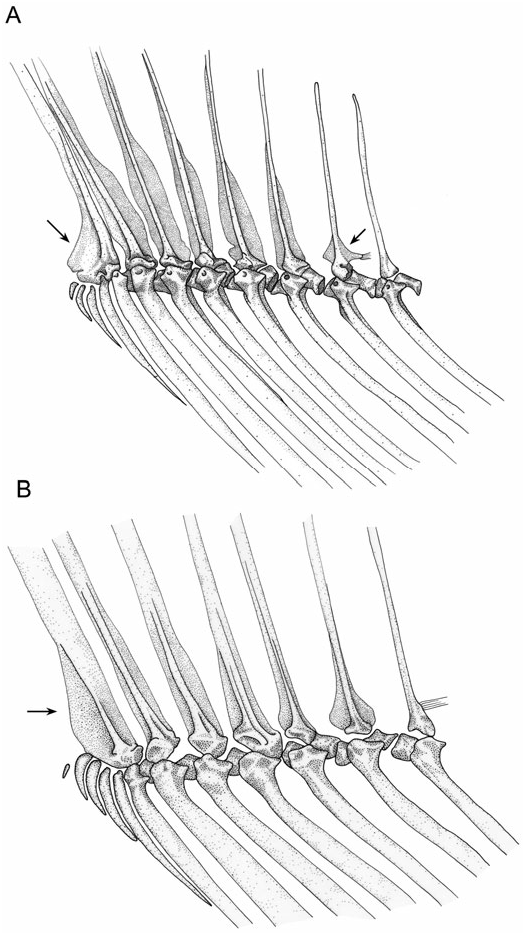 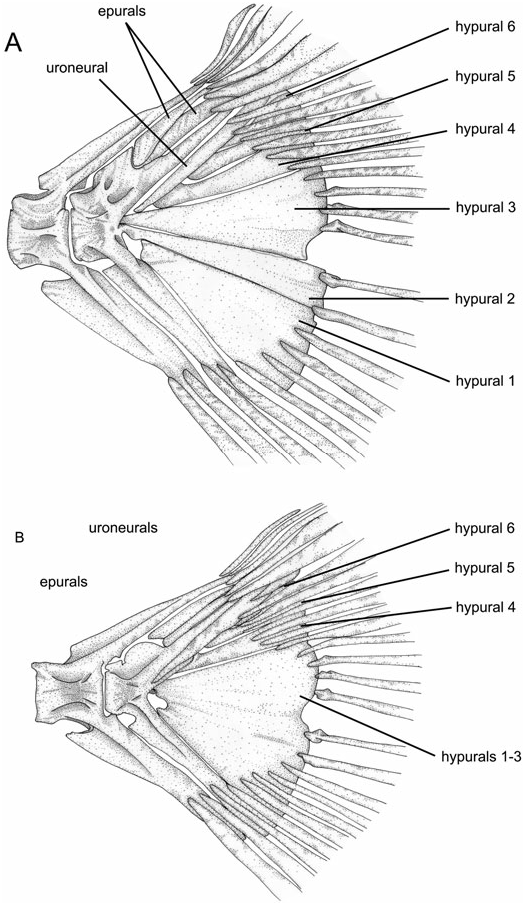