Enghoff, Henrik, 2020, A mountain of millipedes VIII. The genus Aquattuor Frederiksen, 2013 revisited - a new species from the Udzungwa Mts, Tanzania, another from the Nguru Mts, and introduction of the first pair of male legs as a source of taxonomic characters (Diplopoda, Spirostreptida, Odontopygidae), European Journal of Taxonomy 626, pp. 1-32: 5-11

Diameter 1.41–1.58 mm, 50–53 podous rings ( Fig. 9 View Fig ). Shares a short (as broad as long, or slightly longer) gonopodal palette with A. denticulatus   , A. fasciatus   , A. stereosathe   , A. submajor   , and A. udzungwensis   . Differs from these species, except A. fasciatus   , by the combination of fully developed telopodites on the first pair of male legs, the gonopodal telomere describing a ca 270° curve, curving almost in one plane only, by lacking a spinose lid-like flap on the besal telomeral lamella, and by having a distinct mesobasal lobe of the gonopod palette. Very similar to, and perhaps not distinct from A. fasciatus   , differs by being mostly smaller (male diameter <1.7 mm) and by having the prefemoral processes of the first pair of male legs more slender, finger-shaped.

The specimens from Udzungwa Mts National Park very much resemble those from Mt Kilimanjaro (type locality of A. claudiahempae   ), in size ( Fig. 9 View Fig ) as well as in gonopod structure ( Fig. 10 View Fig , cf. Enghoff & Frederiksen 2015: fig. 10). In particular, the two samples agree in having the distal part of the telomere compressed, i.e., instead of forming a gutter, the lamella constituting the telomere is folded flat such that the inside of the gutter becomes invisible; the outside is strongly microspinose on one side and the free margin of the other side is characteristically wavy-spinose ( Fig. 10D View Fig , Enghoff & Frederiksen 2015: fig. 10d).

Enghoff (2016 b) discussed A. fasciatus ( Attems, 1896)   (see below), emphasizing its great similarity with A. claudiahempae   and suggesting that the latter might be a synonym of A. fasciatus   . The similarity between both nominal species also extends to the compressed distal part of the telomere ( Enghoff 2016 b: fig. 7c, f). The only differences between the two seem to be size (cf. the identification key below, couplet 9) and the shape of the prefemoral process of the first pair of legs ( Fig. 3 View Fig ). The new specimens of A. claudiahempae   from Kidatu, Udzungwa Mts are of the same size as A. claudiahempae   from Mt Kilimanjaro ( Fig. 9 View Fig ), and their prefemoral processes strongly resemble those of Kilimanjaro specimens. Aquattuor claudiahempae   and A. fasciatus   are, for the time being, upheld as separate species. 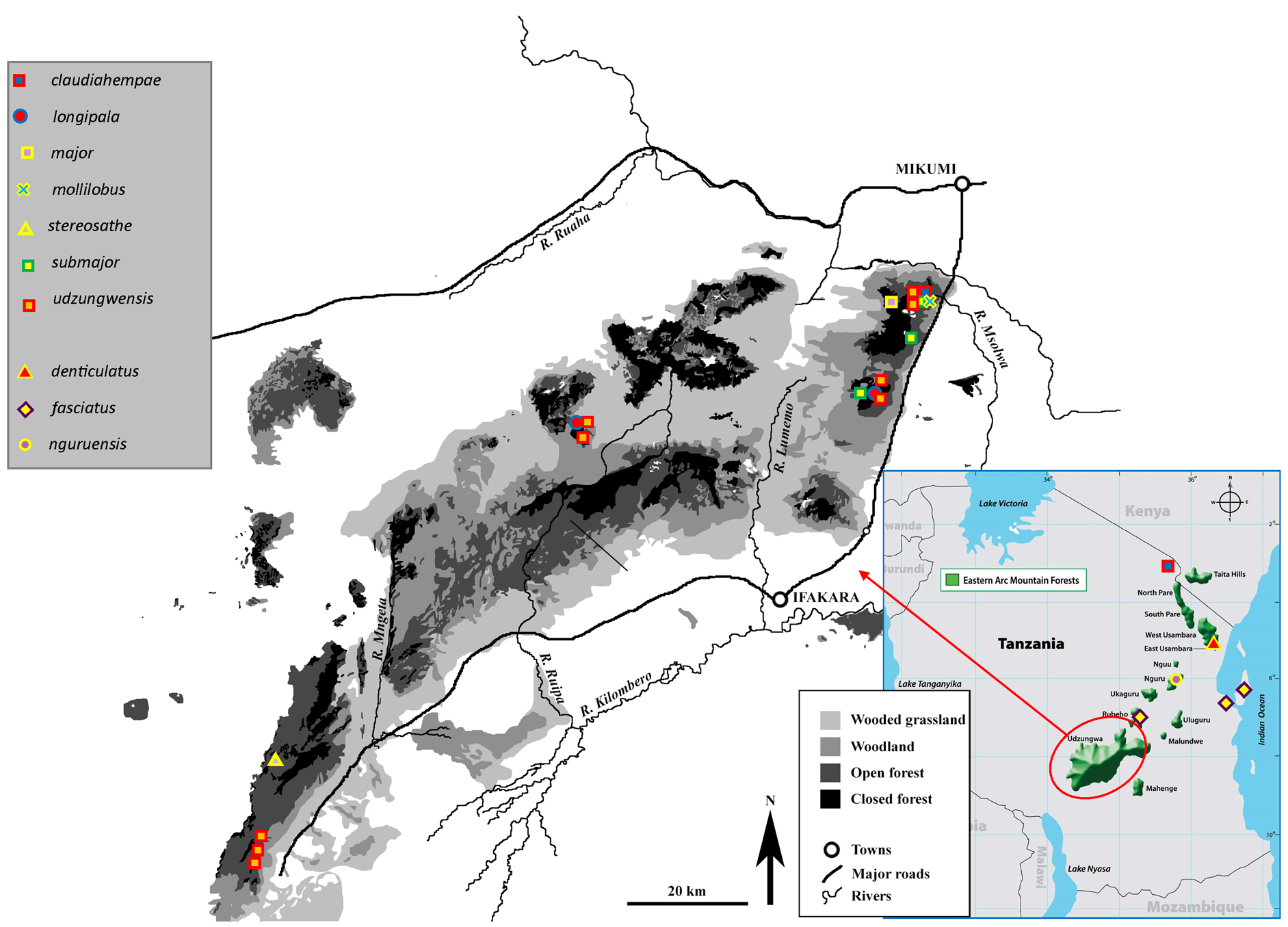 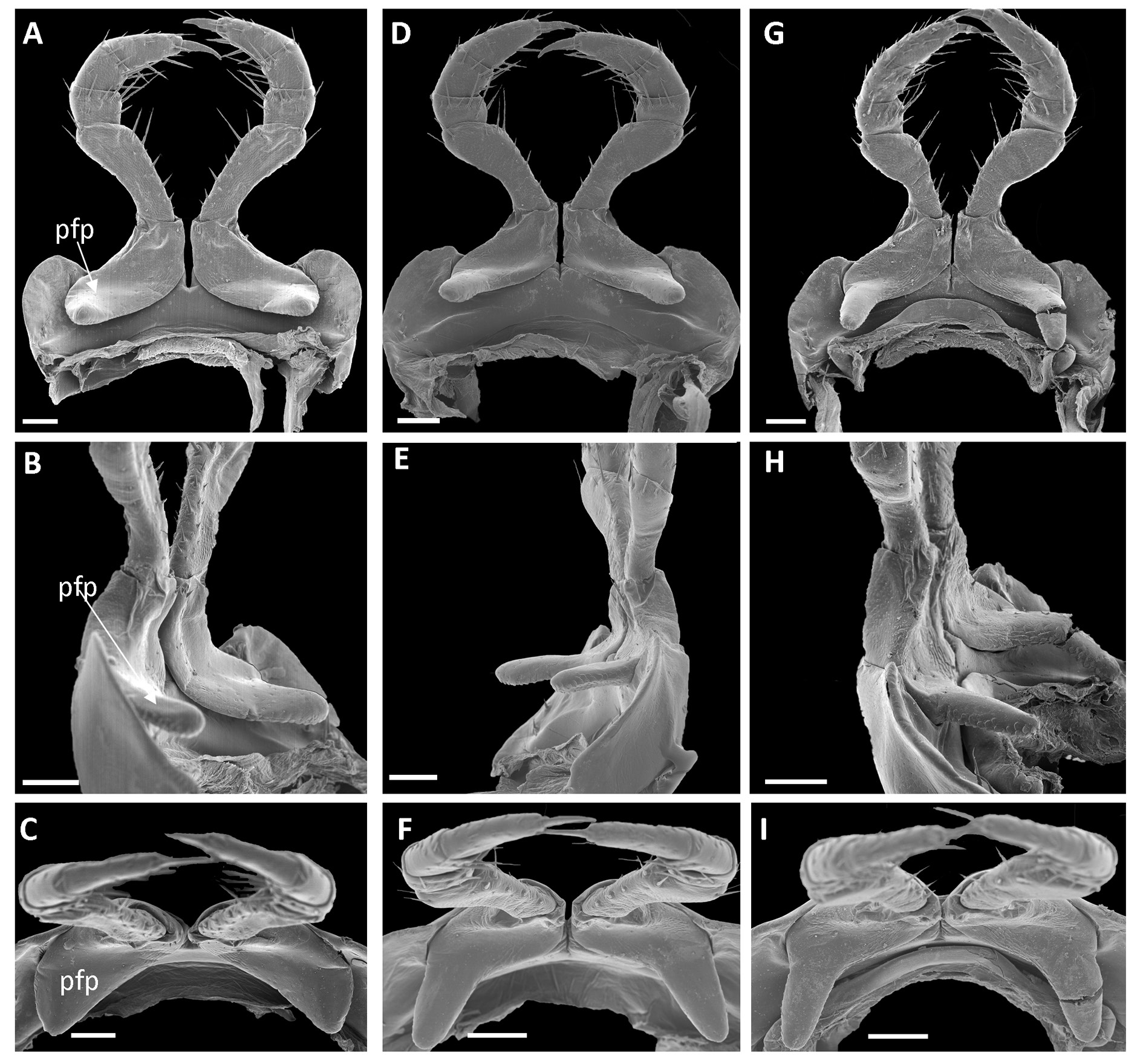 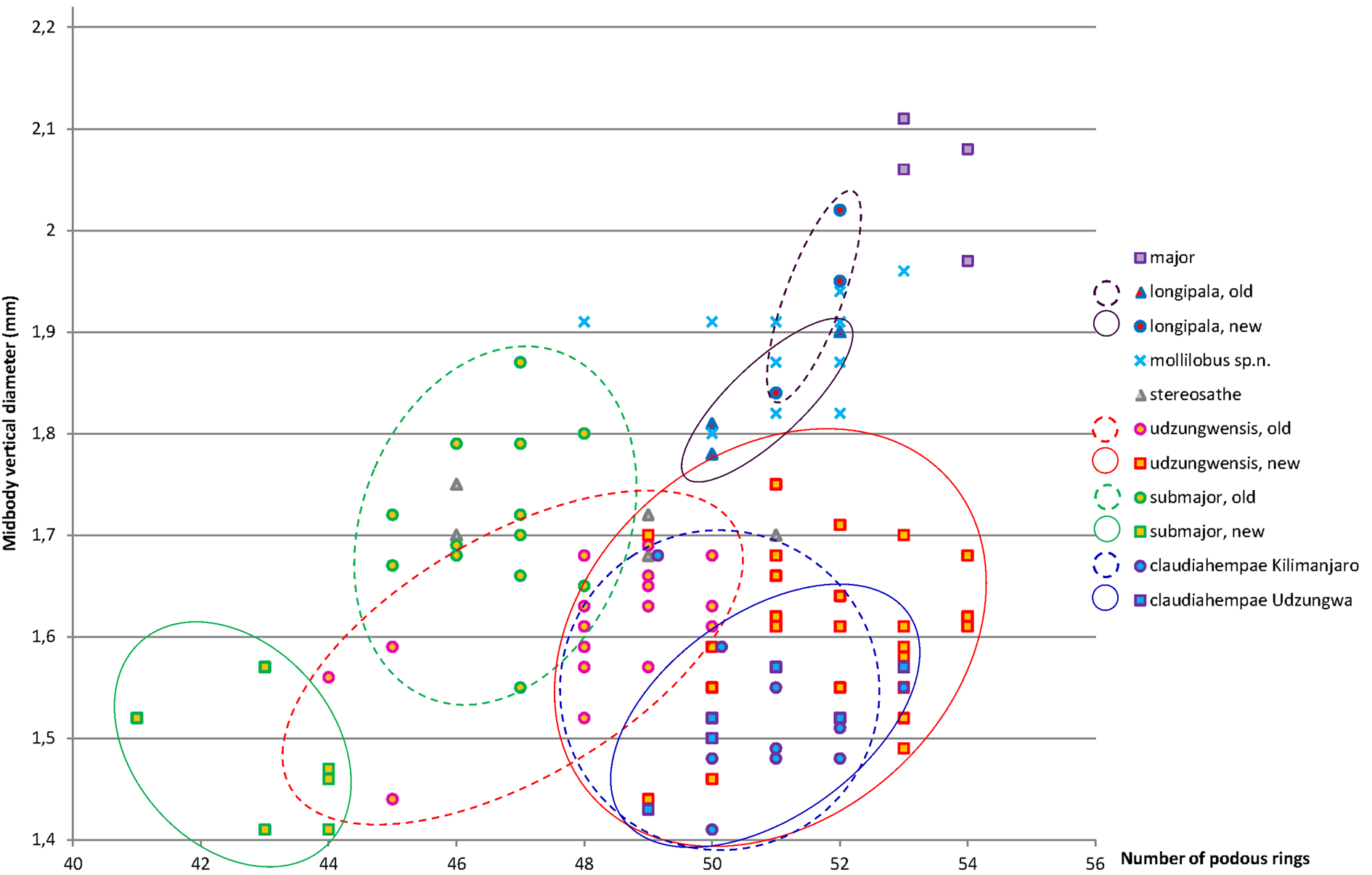 Fig. 9. Aquattuor spp. Body size (number of podous rings and midbody vertical diameter) in males of Aquattuor species from the Udzungwa Mts, and of A. claudiahempae Enghoff & Frederiksen, 2015 from Mt Kilimanjaro. In case of (almost) coinciding values, symbols have been slightly displaced horizontally. 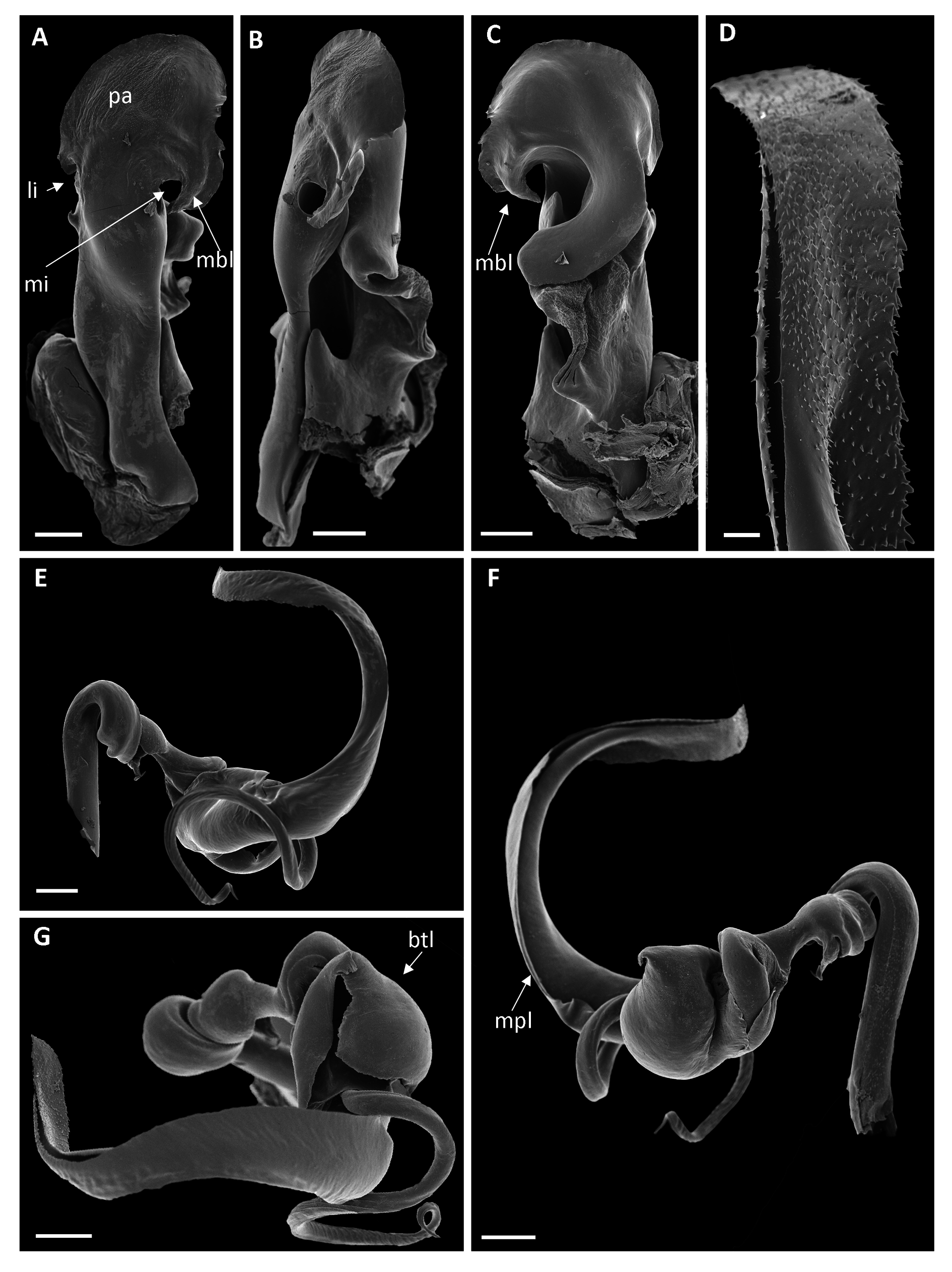