Claxton, Sandra K., 1998, A revision of the genus Minibiotus (Tardigrada: Macrobiotidae) with descriptions of eleven new species from Australia, Records of the Australian Museum 50 (2), pp. 125-160: 140

Diagnosis. Cuticle with a wrinkled pattern on the dorsum (Fig. 17b) and granulation on all legs; 3 small round macroplacoids and an indistinct microplacoid; robust claws with long, low accessory claws and lightly toothed lunules on the fourth pair of claws.

Description. Body length 150-290 /lffi, colourless. Eye spots with small, sparse dots, posterior. Cuticle with wrinkled pattern in transverse rows on the dorsum, granulation in a patch on outside of first three pairs oflegs just above the external claw, also on back and sides of fourth pair of legs. Buccal tube narrow (7.9% of buccal tube length). Stylet supports inserted at 67.9% of buccal tube length and ventral support at 48.1%. Pharyngeal bulb round (about 28 Ilm diameter) containing large, round apophyses, three macroplacoids and a microplacoid. Macroplacoid row short (30.4% of buccal tube length); first macroplacoid round and granular and slightly elongated anteriorly where it is partly obscured by the apophysis; second macroplacoid granular and smaller than the others; third macroplacoid granular but with a caudal bulb which curves in towards the midline. Microplacoid very small, indistinctand close to third macroplacoid. Claws robust (fourth pair of claws is 29.7% of length ofbuccal tube) with long secondary branch and a round refractive base; accessory claws long and well developed close to main branch. Lunules on claws of first three pairs of legs small and smooth; on fourth pair of legs with a few small teeth.

Eggs colourless, round, diameter without processes 54 Ilm, with processes 68 Ilm. Fifty-six processes around circumference. Processes of two types; first javelin-shaped ( Fig. 19aView Figure 19), height 5.5-8 /lffi, base 1-1.6 Ilm joined by a membrane where they are expanded in the middle. Second type of process a short rod, about 21lmhigh. Javelin-shaped processes form circles about 10 /lffi diameter on the egg surface, short rods are scattered within the circles. Short rods appear to rise to surface of the membrane but do not protrude through as do the javelin-shaped processes.

Etymology. Latin, pilatus  , armed with a javelin, which describes the egg, and in addition the species is dedicated to Dr G. Pilato in appreciation of his assistance.

Remarks. The species is very similar to other species of Minibiotus  with three macroplacoids and granulation around the claws but differs from them by the transverse bands of sculpture on the cuticle, which is only visible at high magnification and by the distinctive egg. 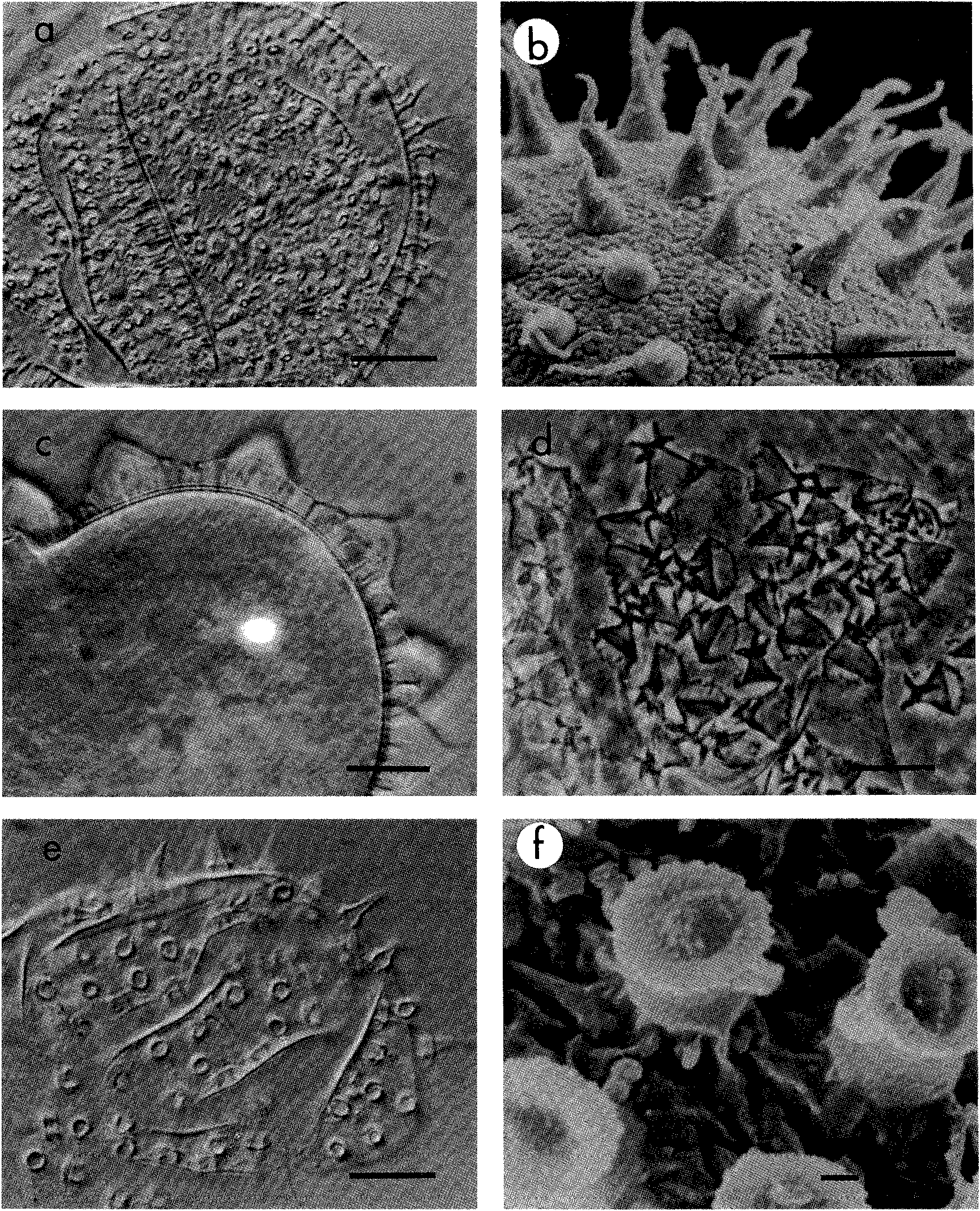