Small stygobitic species similar to most members of the hubbsi group with mature females larger than males, gnathopod 2 larger than gnathopod 1, posterior margin of gnathopod 1 typically shorter than palm, and telson as long as broad with shallow notch in apical margin. Distinguished from other hubbsi group species by gnathopods 1 and 2 with 2 rows of 3 singly inserted setae on the inner palm, and combination of following characters: gnathopod 1 with row of 4 to 5 setae posterior to the defining angle (compare to S. quatsinensis   Holsinger & Shaw, 1986 with 2 or 3 postmarginal setae, 3 hubbsi group species have 1 or 2 postmarginal setae and all others are lacking); pereopods 6 and 7 with broadly expanded bases and distinct distoposterior lobes (similar to S. salturus   Wang & Holsinger, 2001); and uropod 3 with single, slightly distal peduncular seta (similar to S. lanensis   Wang & Holsinger, 2001).

Gnathopod 1 (Fig. 6 View Figure 6 , G1): propodus shorter than that of gnathopod 2; coxal plate longer than broad, with 1 ventral and 2 anterior marginal setae; basis with 5 long setae inserted along posterior margin; ischium with 2 setae and scale patch along posterior margin; merus with 9 posterodistal setae and patch of pubescence; carpus 36% length of propodus, with 9 setae; propodus 1.5 × longer than widest point with 3 superior and 3 inferior medial setae, palm slightly convex with 10 inner and 11 outer bifurcate robust setae, 2 of these posterior to defining angle, defining angle rounded and sub angular, margin posterior to defining angle ca. half the length of the palm with 4-5 setae and scaly patch becoming finer at defining angle and granular along inner margin of dactylus depression; dactylus with 1 seta on outer margin and 3 on distal half of inner margin; dactylus nail ca. 21% length of dactylus.

Male (3.1 mm). Closely resembles female but typically smaller, with fewer setae on appendages, and differing in the following characters: Antenna 1 proportionally longer, up to 46% length of body; primary flagellum with 9 segments. Uropod 2 inner and outer rami subequal in length.

Epithet Stygobromus bakeri   honors David Baker, a citizen scientist, conservationist and visionary who has worked for decades to bring together scientists, politicians, funders, regulators and stakeholders from near and far to conserve the watershed of Jacob’s Well. David lived immediately over the underwater cave for some time, working hard to make his own property environmentally friendly and to educate those who visited. He formed the Wimberley Valley Watershed Association, a non-profit with the mission to protect Jacob’s Well and Cypress Creek.

To date, this small species has been collected in 2 karst springs in southwestern Hays and northwestern Comal counties, Texas, a single karst spring 50 km northeast, on the shoreline of the Colorado River (usually emerging beneath a boat dock in Lake Austin) in Austin, Travis County, Texas and 2 karst spring complexes 74 km further northeast in Salado, Bell County, Texas (Fig. 1 View Figure 1 ). All 4 sites are hydrogeologically distinct.

Jacob’s Well (Fig. 2A-C View Figure 2 ) is a natural spring and cave located in the bed of Cypress Creek with enterable passage typically 1-2 m in diameter, and mapped using cave SCUBA to about 42 m deep and 1.6 km in length. Water issues out of the cave from Glen Rose Limestone (Middle Trinity Aquifer) and flows down Cypress Creek: a tributary of the Blanco River ( Gary et al. 2019). Stygobromus bakeri   sp. nov. was only sampled successfully by hand, with divers using basters, dipnets, and centrifuge vials. Typically, the species was seen in the water column or on the floor, which consisted of silt, breakdown and cobble. Drift nets, bottle traps and cotton lures were not effective at capturing this species at Jacob’s Well. It was seen only in a deeper portion of the cave between 70 m and 215 m penetration. At 70 m penetration, the cave passage descends from -30 m to -42 m through a vertical slot called "The Knife Edge", beyond which, S. bakeri   sp. nov. was collected. But beyond 215 m, the passage ascends back to 30 m and the species was not observed in that section. The habitat was not obviously different in the areas where the species was observed, with the exception of the entrance area (within 70 m of the surface) that has both surface influence and passage constrictions with greater flow, leading to smooth, scoured rocks and less silt.

John Knox Spring (Fig. 2D, E View Figure 2 ) emerges from Lower Glenn Rose Limestone (Middle Trinity Aquifer) through a 0.3 m vertical crevice-like orifice 1 meter below the water surface and along the bank of a limestone grotto pool forming the headwaters of Carper’s Creek which discharges into the Blanco River. Interstitial surface insect fauna collected from this spring along with Stygobromus russelli   (the most widespread Stygobromus   species in central Texas) suggests that some portion of the flow might arise from hyporheic or vadose origin. Details of this habitat are described in Külköylüoğlu and Gibson (2018).

Robertson Springs (Fig. 3A-D View Figure 3 ) and Downtown Spring Complex (Fig. 3E, F View Figure 3 ) are 0.4 km apart, located on opposite sides of Interstate Highway 35 in the city of Salado. Both spring complexes comprise several spring orifices issuing from Edwards and Comanche Peak limestones forming spring runs that empty into Salado Creek. A diverse interstitial groundwater fauna (Table 1) including relatively widespread species has been recorded from these springs. Stygobromus bakeri   sp. nov. was initially sampled by drift netting at Middle Robertson Springs ( Norris et al. 2012). Robertson Springs has numerous spring openings (over 30 sites mapped during high flows) with variable discharge and substrate issuing from both banks and from under the 300 m long spring run. Stygobromus bakeri   sp. nov. was collected at 4 spring sites throughout the run at different spring zones within the Robertson Springs complex ( Diaz et al. 2016; Diaz and Warren 2019). The upper springs cease flowing seasonally and often produce troglofauna (terrestrial cave fauna) when flows resume after adequate rain events, while the lower springs are perennial and occasionally produce troglofauna. The Downtown Spring Complex is more discrete than Robertson Springs, with each of the 7 spring sites issuing from a single origin. Most of the springflow issues from Big Boiling Spring and flows down a short 5 meter spring run that empties into Salado Creek. Anderson Spring is 350 m downstream of Big Boiling Spring, has much less flow, issues from a fissure underneath a spring run (250 m downstream of the headwater Critchfield Spring), and flows 21 m before joining Salado Creek ( Norris et al. 2012). Hydrological studies of this area in the Northern Segment of the Edwards Aquifer showed the Downtown Spring Complex to be part of an integrated fracture system with groundwater flow velocities recorded at 1.8 m/sec and confirmed mixing of groundwater and Salado Creek surface water at Big Boiling Spring ( Wong and Yelderman 2017).

Mormon Spring # 3 (Fig. 2F, G View Figure 2 ), which normally lies beneath Lake Austin on the Colorado River, issues from Fredericksburg Group consolidation (limestone, dolomite, chert, and marl). Lake Austin was constructed in 1940, replacing the damaged Austin Dam, which may have also inundated the spring. From time to time, the Lower Colorado River Authority lowers the level of Lake Austin to allow for dock maintenance. During the last such lowering of 3 m in January 2017, multiple spring complexes were visible over a stretch of about 100 m along the east shore of the lake. North to south, Mormon Springs numbers 1 and 2 emerged from sediment, without visible bedrock apertures. Mormon Spring # 3 consists of multiple bedrock outlets in a cutbank excavated in bedrock below a boat dock. The spring appears associated with the Trinity Aquifer but is located near the Edwards Aquifer boundary and could potentially be a gravity spring from local recharge intersected by the Colorado River. Alternatively, this spring could represent flow from the north, from the Balcones Escarpment. No dye tracing has been conducted at this spring to characterize its springshed.

Stygobromus bakeri   sp. nov. co-occurs with S. russelli   (all sites), S. bifurcatus   ( Jacob’s Well, Salado Springs, and Mormon Springs), and a large undescribed species of Stygobromus   in the Stygobromus flagellatus   group ( Jacob’s Well). The presence of 4 Stygobromus   species at Jacob’s Well is notable, and presumably all 4 species occupy different ecological niches. Due to its unusually small size and robust body, S. bakeri   sp. nov. is able to inhabit both deep cave and shallow spring habitats. It may also occupy interstitial habitats such as the hyporheic zone of surface streams, although it was not collected in hyporheic samples from Carper’s Creek, near John Knox Spring. The small adult size and general stout teardrop body shape is reminiscent of Seborgia relicta   Holsinger, 1980 and S. hershleri   Holsinger, 1992 found in groundwater habitats (deep aquifer caves and wells, springs, and hyporheos) throughout the Edwards Plateau and Balcones Escarpment. Seborgia   has not been found associated with the Glen Rose formation of the Trinity Aquifer nor with the northernmost section of the Edwards Aquifer extending north of the Colorado River in Austin to Salado where Stygobromus bakeri   sp. nov. occurs (Fig. 1 View Figure 1 ). The furthest northern record for Seborgia relicta   is from Cold Spring issuing from the Edwards Aquifer on the southern bank of the Colorado River (Ladybird Johnson Lake) only 4 km downstream of Mormon Spring #3. Groundwater fauna records for Stygobromus bakeri   sp. nov. sites (Table 1) include interstitial and relatively widespread, ecological generalist stygobionts and crenobionts, yet widespread cavernicolous stygobionts such as Cirolanides   spp. isopods are absent at these sites ( Holsinger 1967; Lewis 2000; Krejca 2009; Gibson et al. 2018; Hutchins 2018; Devitt et al. 2019; Schwartz et al. 2019; Alvear et al. 2020). Many of the springs have been thoroughly sampled and regularly monitored for multiple years, so the stygofauna is better characterized relative to many other Texas groundwater sites. 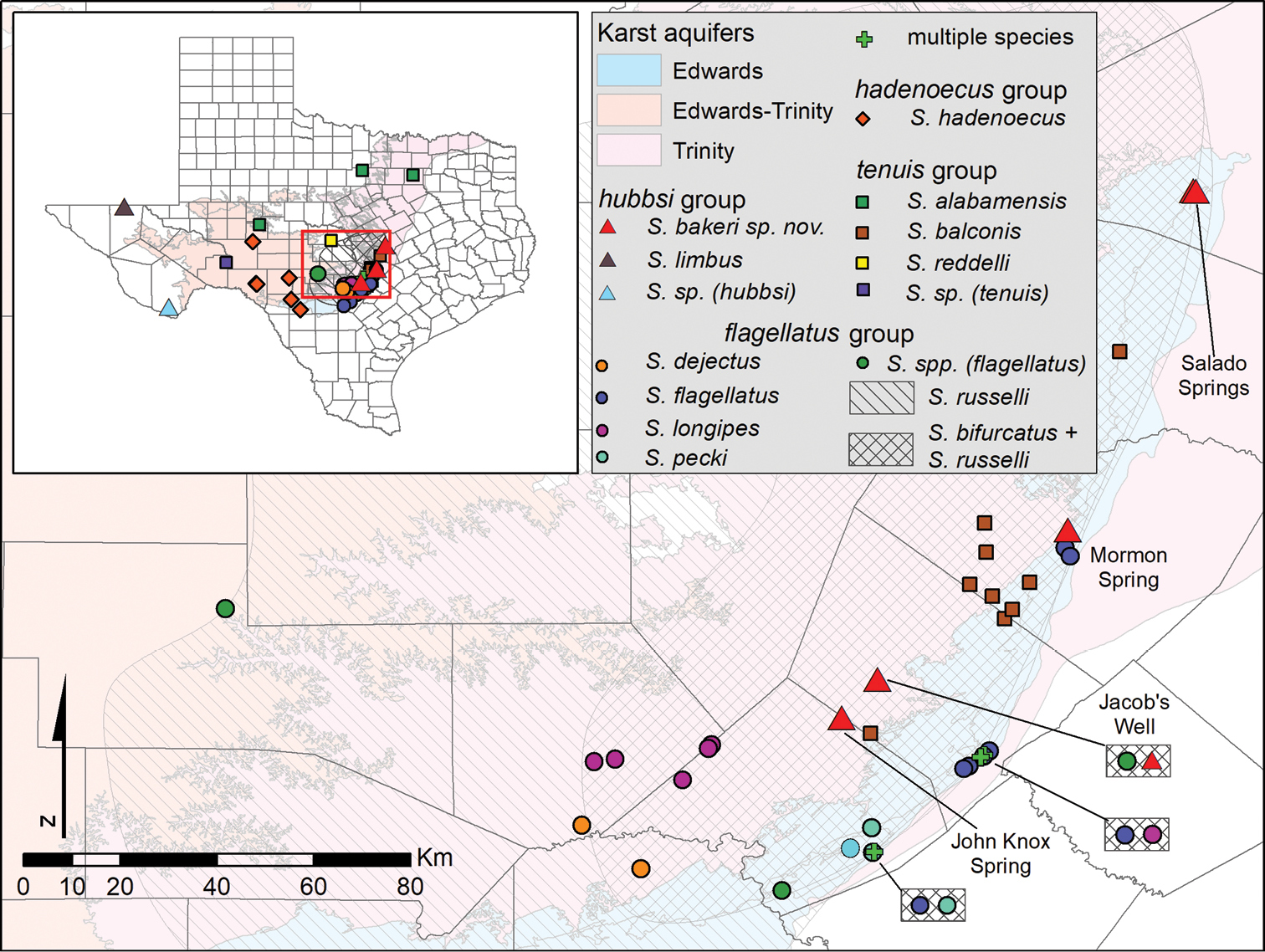 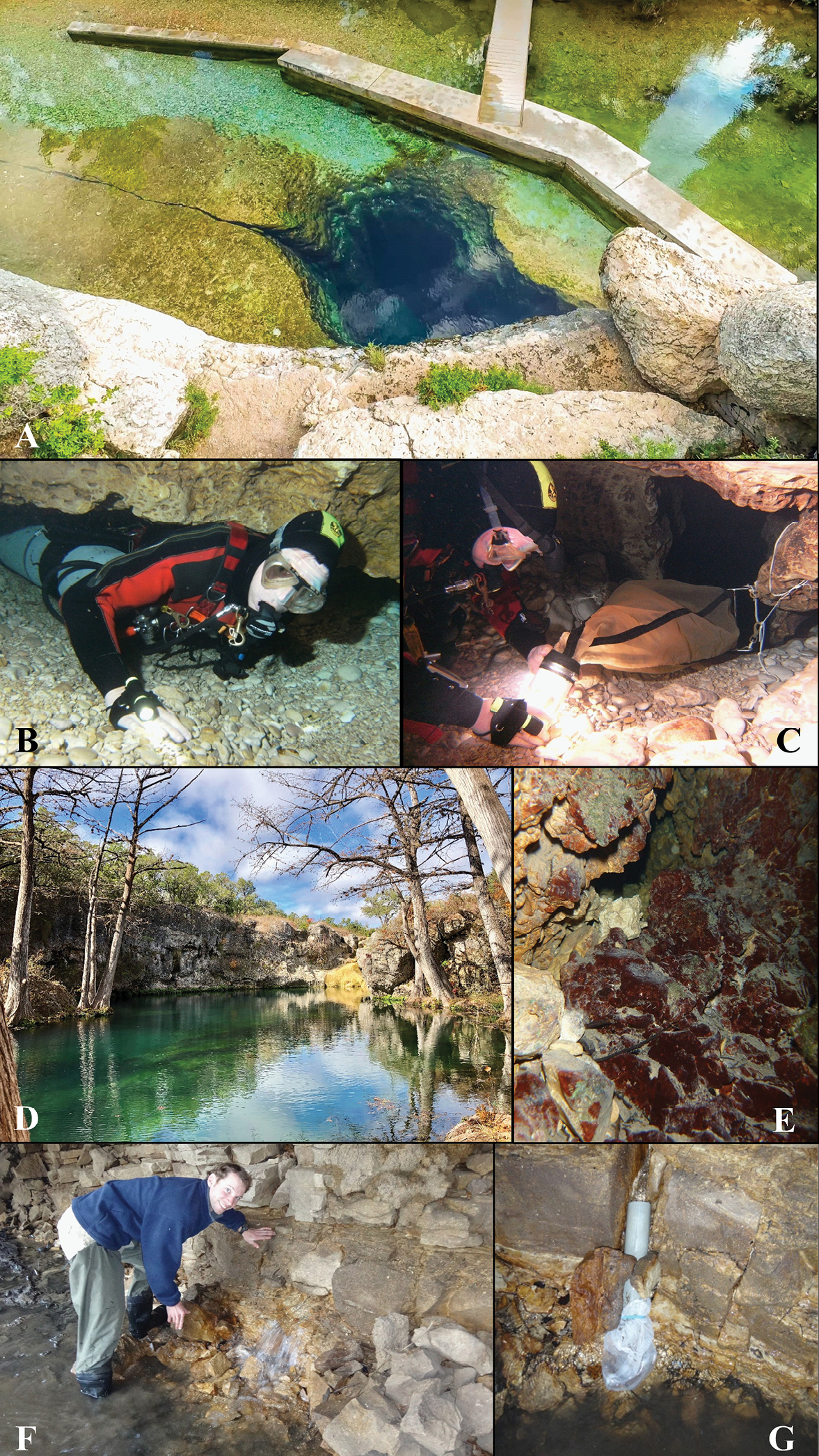 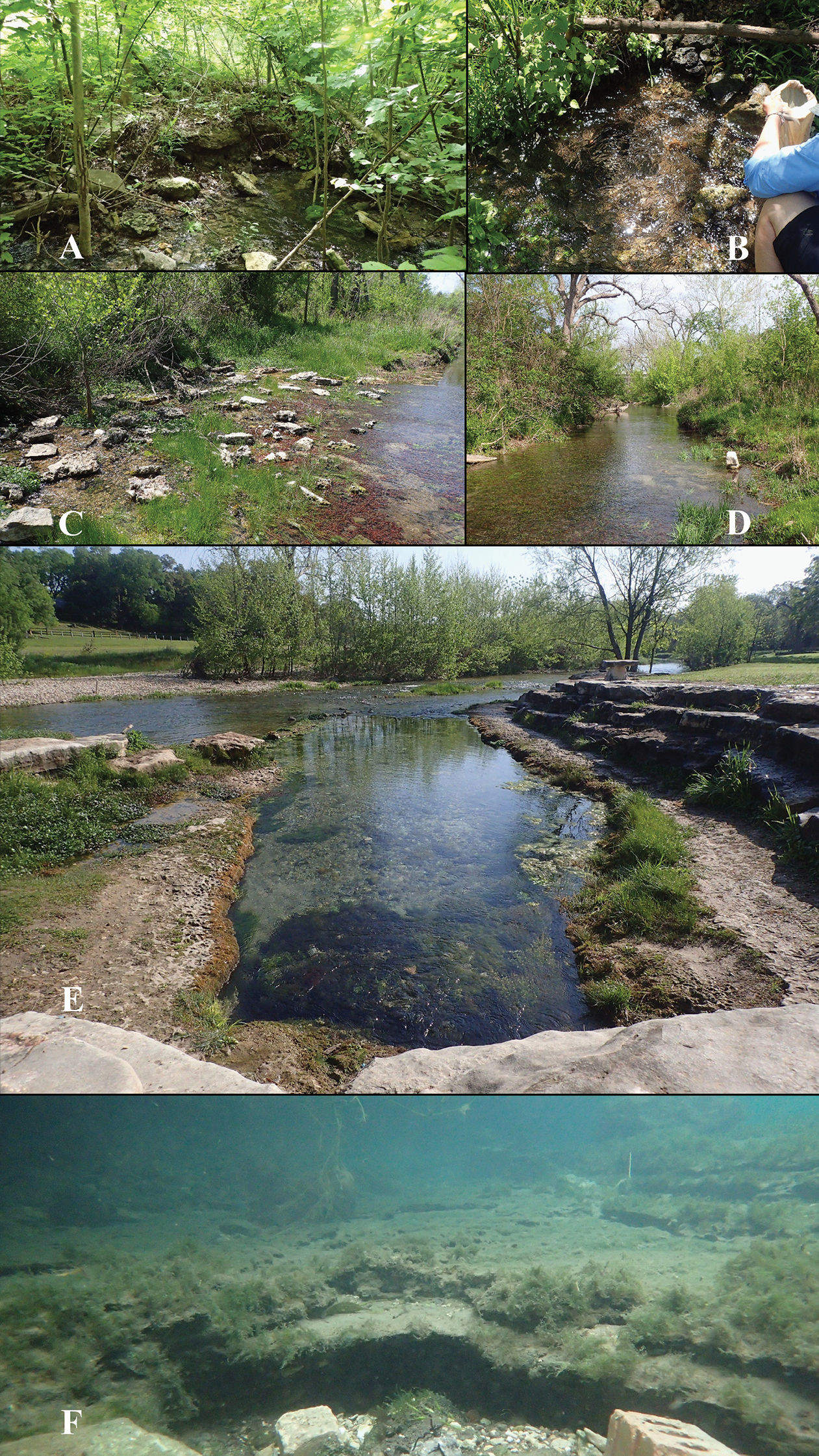 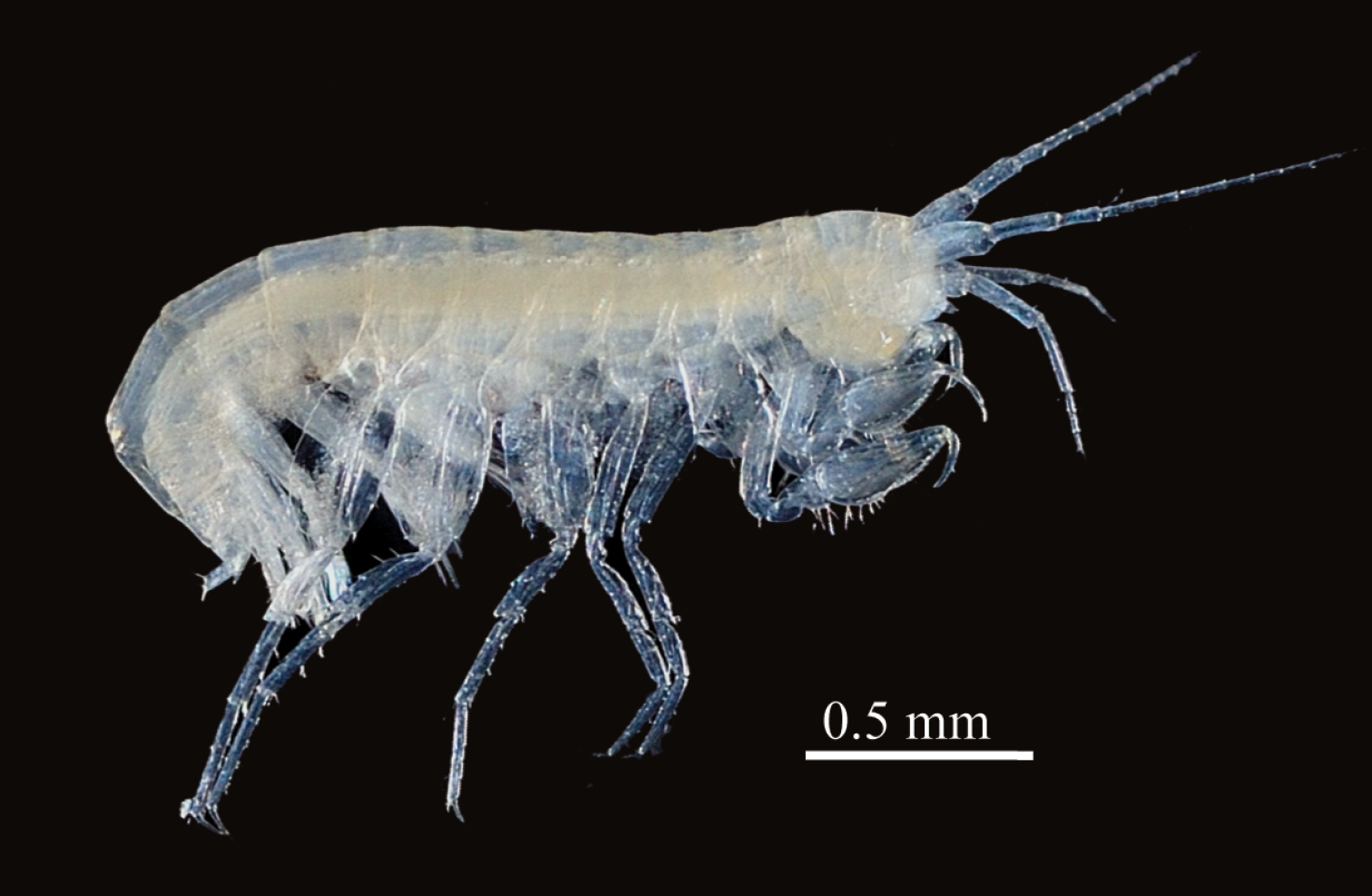 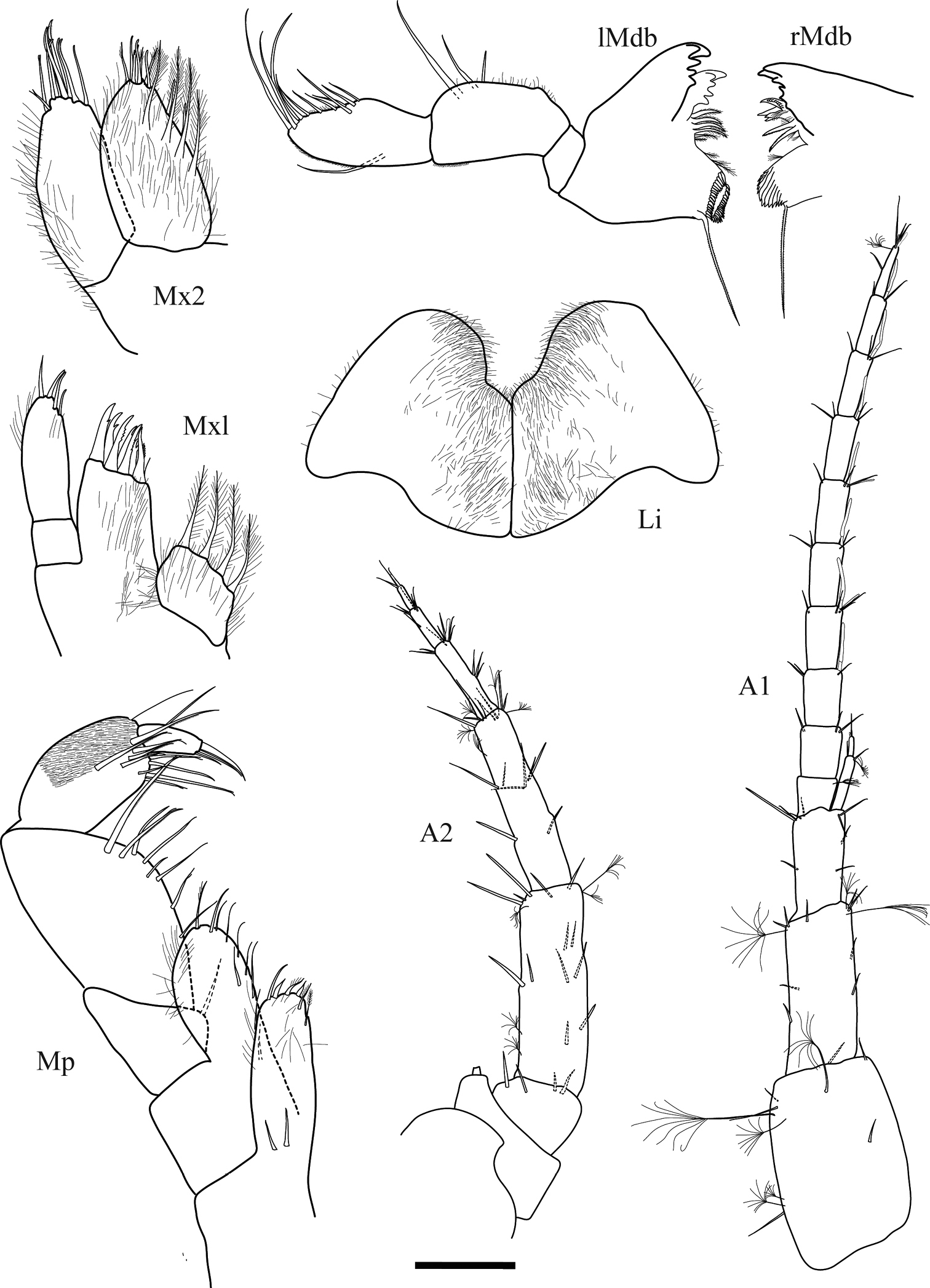 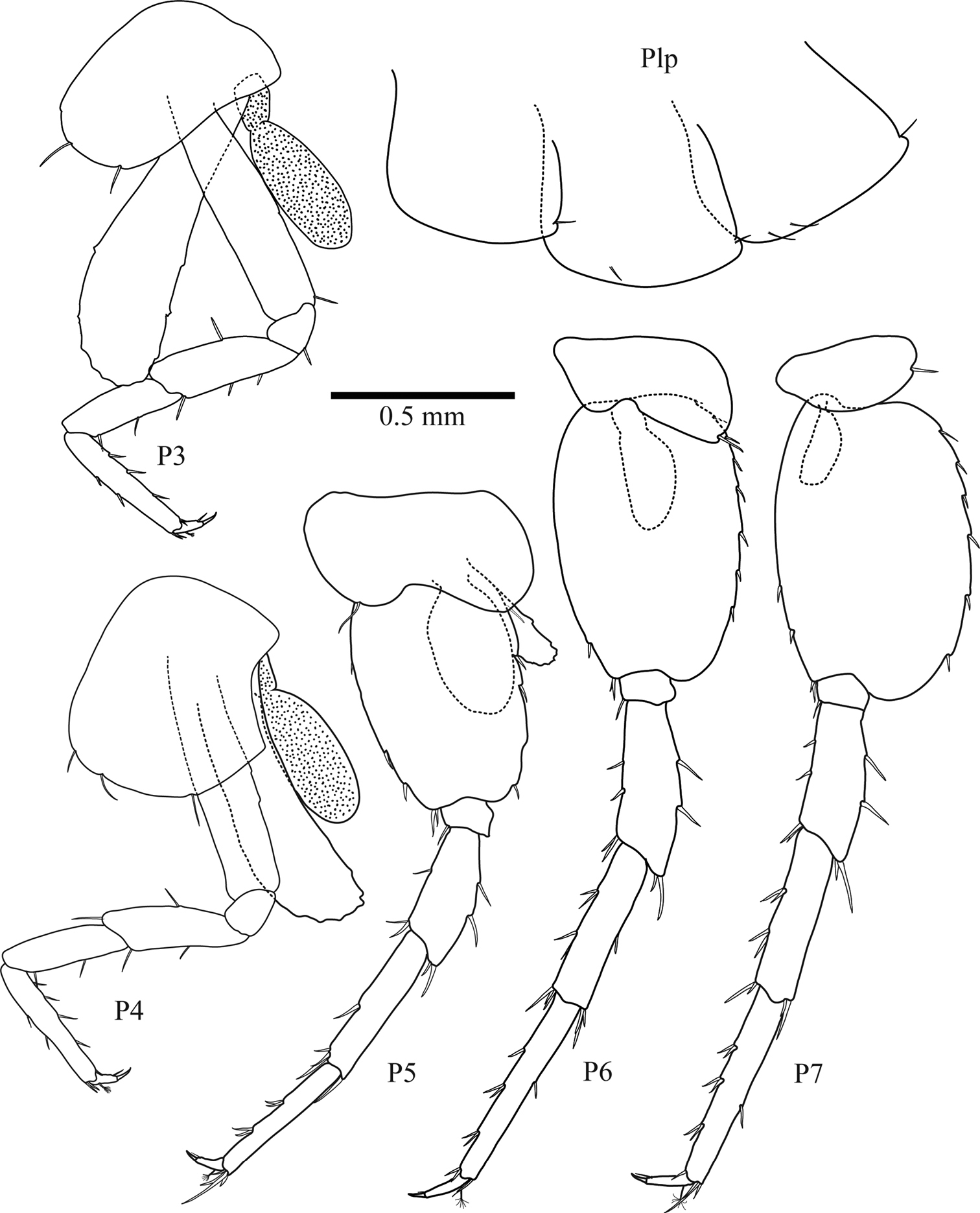