Etymology. The specific epithet berbeza is a Malay word denoting “contrasting,” alluding to the contrasting orange and dark brown dorsal color of the new species.

Variation. Males have relatively wider heads (38.7–41.4 % of SVL) than females (35.7–38.7 % SVL) and smaller inner metatarsal tubercles (males: 4.6–5.4 % SVL; females: 5.5–5.9 % SVL; Table 3). One male ( SRC 00906 View Materials ) has a small vocal sac opening very close to jaw at left corner of mouth; the nuptial pad covers the medial surface of the first finger from its base to the last phalanx. In all three males and one female, the tibiotarsal articulation of the adpressed limb reaches the posterior corner of eye, and in the remaining three females, this articulation does not reach the posterior corner of the eye, as it does in the holotype. Outer metatarsal tubercles are usually absent (only one individual ( SRC 00906 View Materials ) had a minute tubercle (0.9 mm) on the plantar surface of its right foot). One female ( KUHE 57073 View Materials ) had a thin, light vertebral line in its dark dorsal band, and the wide dark brown middorsal band is interrupted by a narrow transverse band of orange brown ground color just behind eyes.

Among members of Occidozyga , O. berbeza sp. nov. most resembles O. diminutiva (Taylor) from the Philippines in many morphological characteristics, such as its fourth toe with one or two terminal phalanges free of web, only the toes have terminal disks, and its fingers lack enlarged disks. However, the new species differs from O. diminutiva in having male and female SVL less than 20 mm, by possession of dorsally oriented nostrils, an unnotched tongue, no dorsolateral skin fold, and skin of back with numerous transverse wrinkles (vs. female SVL 26 mm, nostrils lateral, tongue slightly notched, a thin dorsolateral skin fold from eye halfway to groin, and skin of back smooth or faintly shagreened in O. diminutiva ).

Occidozyga berbeza sp. nov. differs from O. celebensis Smith from Sulawesi, Indonesia by having toes with terminal disks (vs. toes at most with conical tips).

Occidozyga berbeza sp. nov. differs from O. laevis from the Philippines in having SVL less than 20 mm and longer toes, which are not webbed to disks (vs. male SVL of 22–40 mm and female SVL of 27–62 mm, and fourth toe broadly webbed to disk).

Occidozyga berbeza sp. nov. having male SVL of 16–18 mm is similar to O. magnapustulosa (Taylor & Elbel) from Thailand with male SVL of 16–21 mm, but differs from it by fingers not webbed, toe tips with disks, fourth toe not webbed to disk, a transversely wrinkled dorsum, and chin and throat whitish and spotted with black (vs. remnant of webs between two inner fingers, toe tips blunt, lacking disks, web extending to toe tips, without deep incision, dorsum covered with craterlike warts, some of which have white tips, and throat of males heavily pigmented in O. magnapustulosa ).

Occidozyga berbeza sp. nov. differs from O. martensii from Thailand, China, Vietnam, Laos, Myanmar, and Malaysia by having a SVL less than 20 mm, a transversely wrinkled dorsum, and a whitish chin and throat spotted with black (vs. female SVL of 26–28 mm and adult male SVL of 19–24 mm, lightly rugose dorsum, and chin and throat dark in males, or dusky to immaculate in females).

Natural History. The holotype and some paratypes were obtained on the damp forest floor near a pond and a stream at low elevation. Other paratypes were near shallow pools and jumped into there when disturbed. Other species found in this locality were: Ansonia leptopus (Günther) , Ingerophrynus divergens (Peters) , Leptolalax gracilis (Günther) , Limnonectes conspicillatus (Günther) , L. hikidai Matsui & Nishikawa , L. palavanensis (Boulenger) , Kalophrynus heterochirus Boulenger , Microhyla borneensis Parker , M. malang Matsui , Pulchrana picturata (Boulenger) , Kurixalus chaseni (Smith) , and Nyctixalus pictus (Peters) . No calls or amplectant pairs were observed during fieldwork conducted in early June and mid-August. Females collected in mid-August appeared to have completed laying eggs, and one female (KUHE 17220) had a few, dark brown ova in the ovaries. Oviposition site(s) and larvae are presently unknown. FIGURE 2. Dorsal view of body (A, B) and frontal view of mandible (C, D) of Limnonectes rhacodus (holotype, MZB Amph 2991: A, C) and Occidozyga sp. from Matang (KUHE 53037: B, D), showing dorsum similarly with transverse wrinkles (A, B) and different mandible shape (with a median and two lateral cusps in C and with a single median cusp in D). Not to scale. 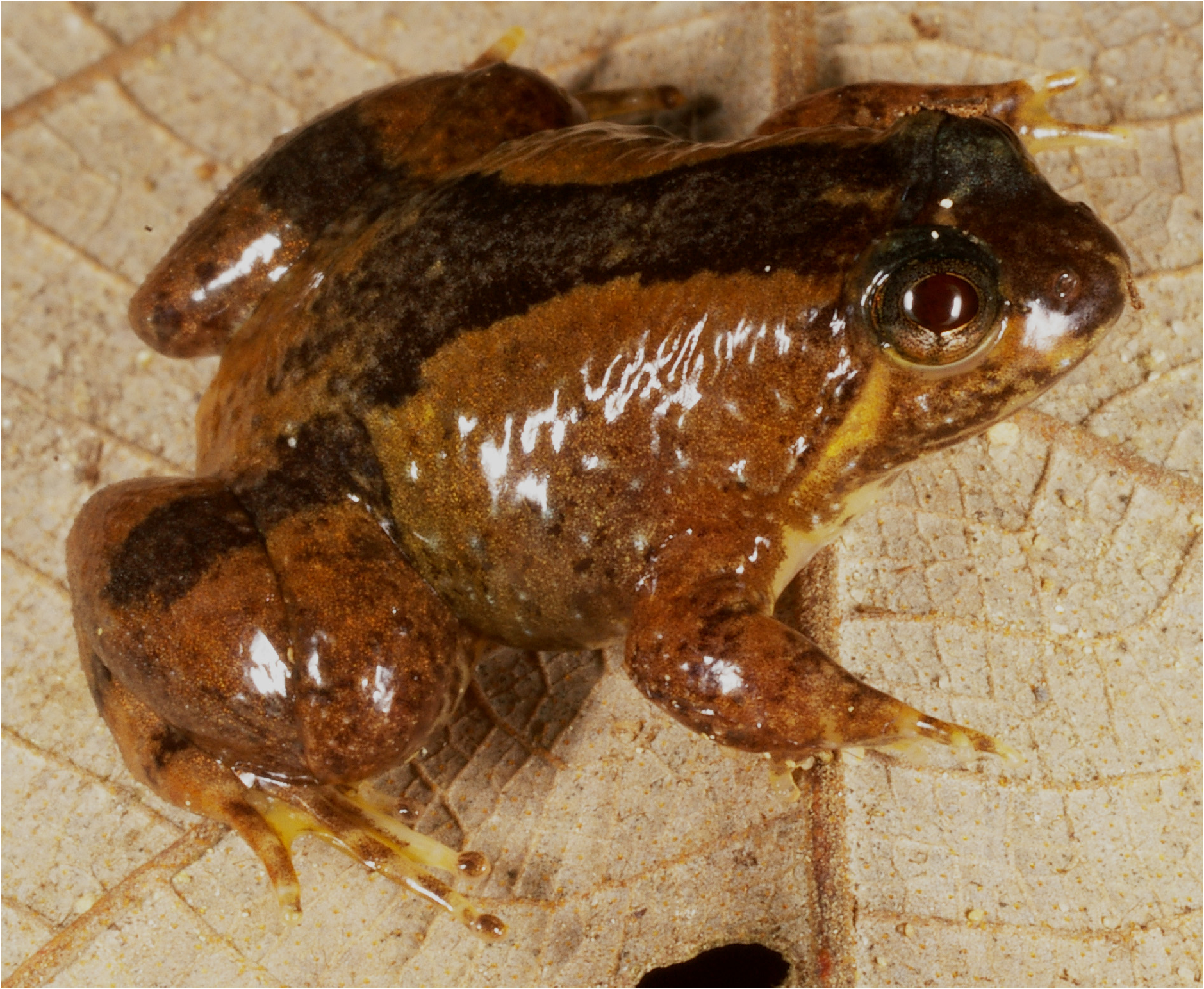 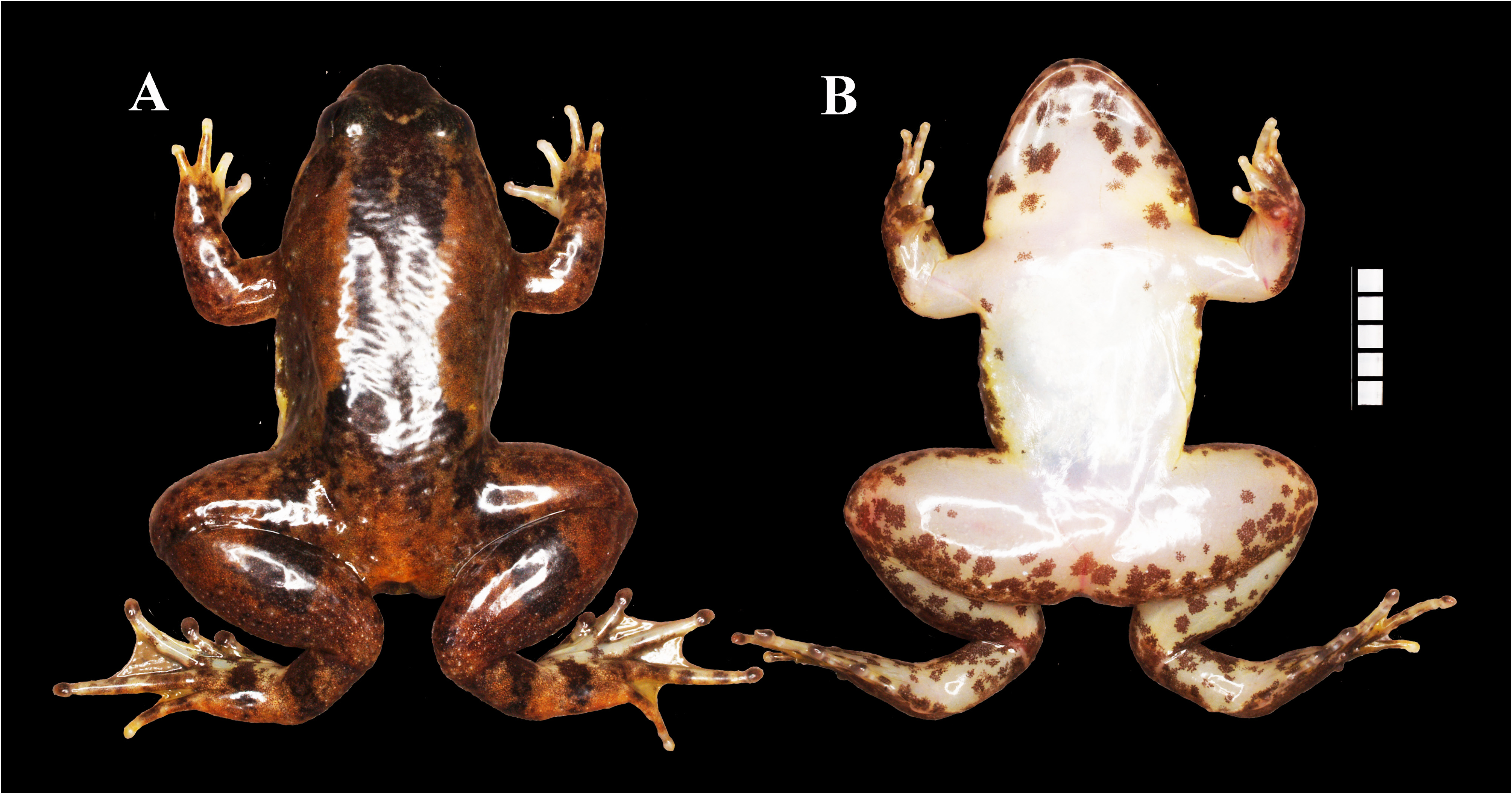