Body dorsoventrally compressed, ovoid in dorsal view with widest part ~ 2 times wider than neck and pelvis; TrunkL%SVL— 0.473 (0.048); dorsum with heterogeneous scales in size and shape; largest scales with sharp spines angled 10–30 ° posteriorly and ~ 4–7 times larger than smallest scales; large dorsal scales with spines tending to occur in transversely-aligned clusters of ~ 4–6; smaller dorsal scales rugose or with weak, low keels, arranged in loose whorls around clusters of large, spiny scales; dorsolateral edge of pelvis always with a cluster of enlarged spines at posterior edge where skin is fused to bone; ventral scales homogeneous, approximately half the size of large dorsal scales, kite-shaped and arranged in diagonal rows; ventral scales smooth, or at most with raised midline (no keel or protruding spine).

Pre-cloacal pores 2, set among 3–5 scales, positioned anterior to distal edges of cloaca, midway between anterior and posterior edge of leg; tail short and thin with blunt tip, TailL%SVL— 1.268 (0.102); scattered enlarged scales aligning along most of the length of the tail to terminus; lateral surfaces of tail base with short protruding spines.

Measurements for the type series are presented in Table 5 View TABLE 5 .

Habitat. Recorded from Mallee and Mulga woodlands, often with stones strewn on the ground.

Distribution. Widely distributed throughout the Goldfields region of Western Australia ( Fig. 1 View FIGURE 1 ). From just outside the south-eastern edge of the Pilbara, then south to near Norseman. Two older western records are from Yalgoo ( WAM R 13639 View Materials ) and Dongara ( WAM R 13476 View Materials ), although the latter record is likely in error given the habitat preferences of this species. A recent eastern record ( WAM R 163342) is from Neale Junction towards the South Australian border.

Etymology. pseudopsephos means ‘false pebble’, with pseudo Latin for ‘false’ and psephos is Greek for ‘pebble’. The name is an allusion to the pebble-mimicking abilities of this species.

Comparisons with other species. Based on its widespread distribution, we provide comparisons of T. diabolicus sp. nov. to all species treated here except T. cephalus .

Tympanocryptis pseudopsephos sp. nov. is distinguished from T. diabolicus sp. nov. by possessing enlarged dorsal scales in short transverse rows in rows of 4–7 scales (versus 2–5), snout concave (versus straight or convex), rostral scale width 2 times height (versus 3 times), keels of scales on upper arm not aligned, scales on upper thigh not aligned, and ventrals smooth or slightly raised (versus with low keels).

Tympanocryptis pseudopsephos sp. nov. is distinguished from T. fortescuensis sp. nov. by possessing enlarged dorsal scales in short transverse rows in rows of 4–7 scales (versus 2–5), concave snout (versus straight to convex), scales on snout rugose with feeble keels (versus with low keels), rostral scale 3 times wider than high (versus 2 times), keels on dorsal surface of upper arm not aligned, keels of scales on top of thigh not aligned (versus usually aligned), ventrals smooth or slightly raised (versus with low keels), and reddish-brown color overlain with black (versus light brown).

Remarks. Tympanocryptis pseudopsephos sp. nov. is usually the taxon depicted in field guides (e.g. Storr et al. 1983; Wilson & Knowles 1988; Wilson & Swan 2003; Cogger 2014), as this species is the most widelydistributed of the T. cephalus species-group members and therefore most likely to be encountered and photographed. This also extends to diagnoses and descriptions in such guides and keys, and also often in taxonomic treatments as well. For example, in Mitchell’s 1948 revision of the group, the specimen WAM R 7067 figured under the T. cephalus cephalus section is a T. pseudopsephos sp. nov. from 48 km east of Kalgoorlie. Moreover, Mitchell commented that his description of the ‘inland form’ (i.e. pseudopsephos ) differed slightly from that in Günther’s (1867) original description, Boulenger’s (1885) figure, and photographs of the types sent to him by the Natural History Museum: ‘…the [two syntype] specimens...differ in scalation detail from inland specimens. It has been suggested to me by a fellow worker that this inland form should be described as a new race. However, after considering that no similar specimens have been taken, it is assumed that the type specimens are merely local variants, and not typical representatives of the species which Gunther in fact described.’ (p. 64). We now know that the syntypes were of true T. cephalus and that the ‘inland form’ is the distinct T. pseudopsephos sp. nov. Historically, a lack of specimens has hindered taxonomic understanding in Tympanocryptis , and indeed continues to hinder revision of other arid zone forms. 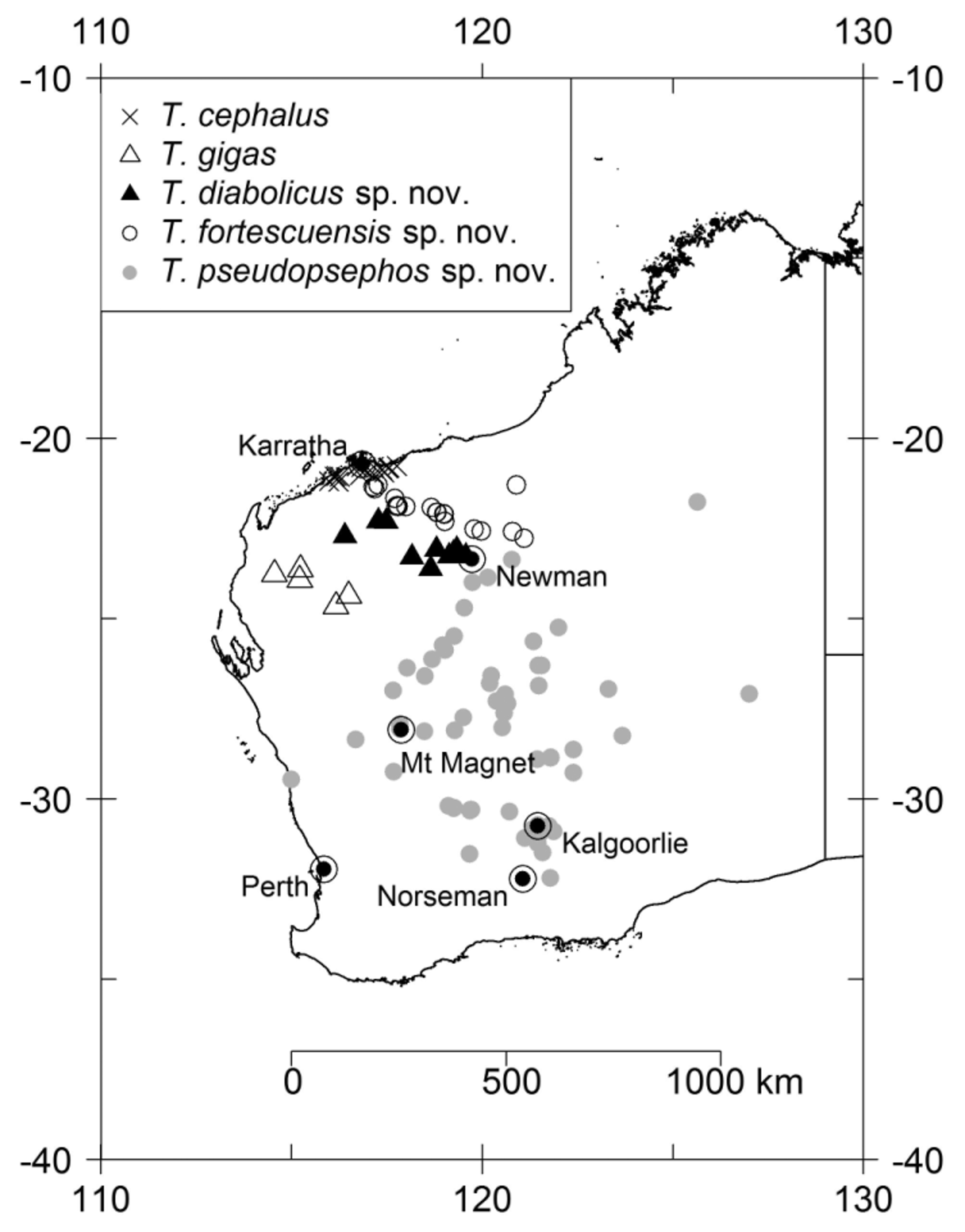 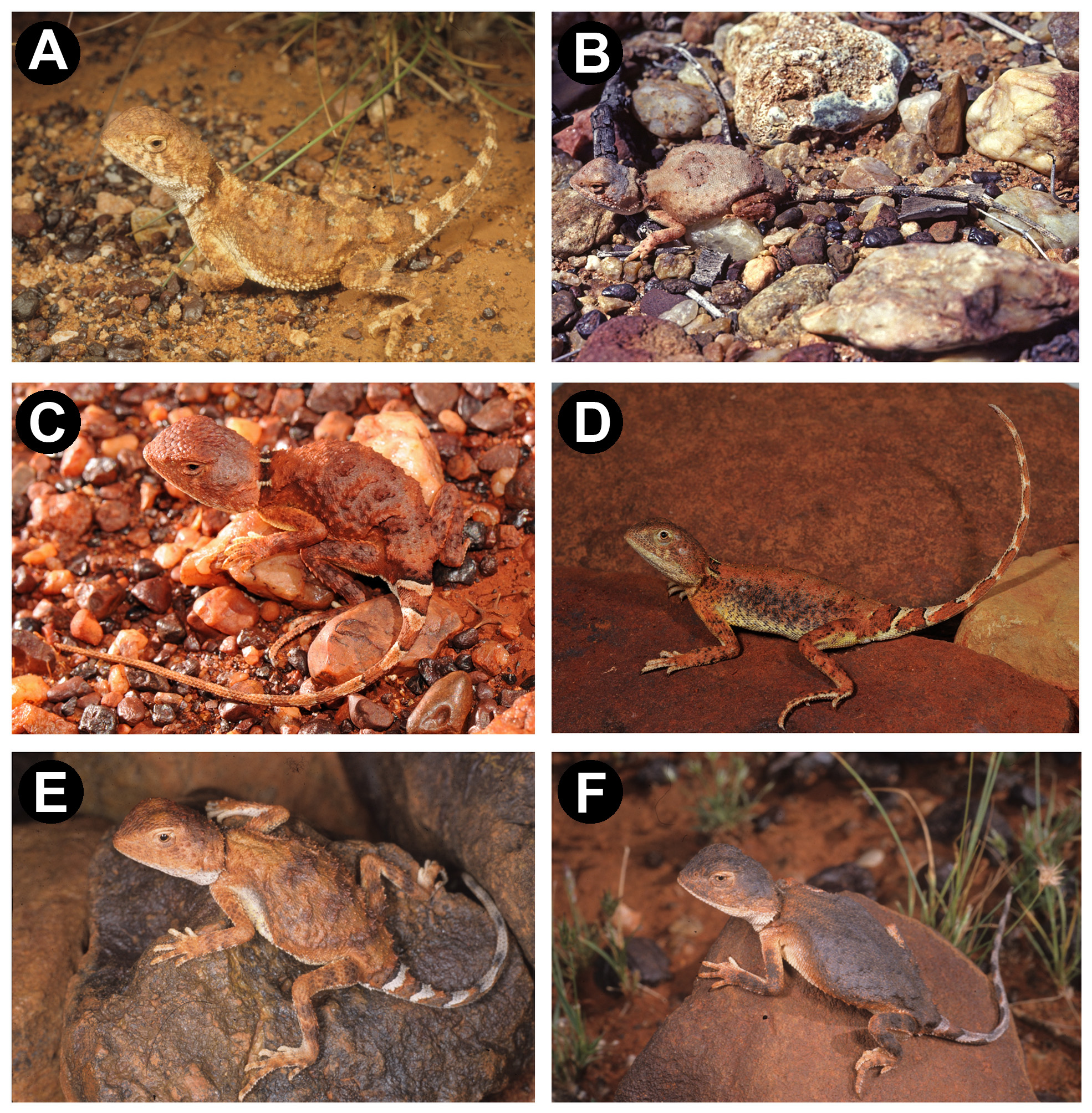 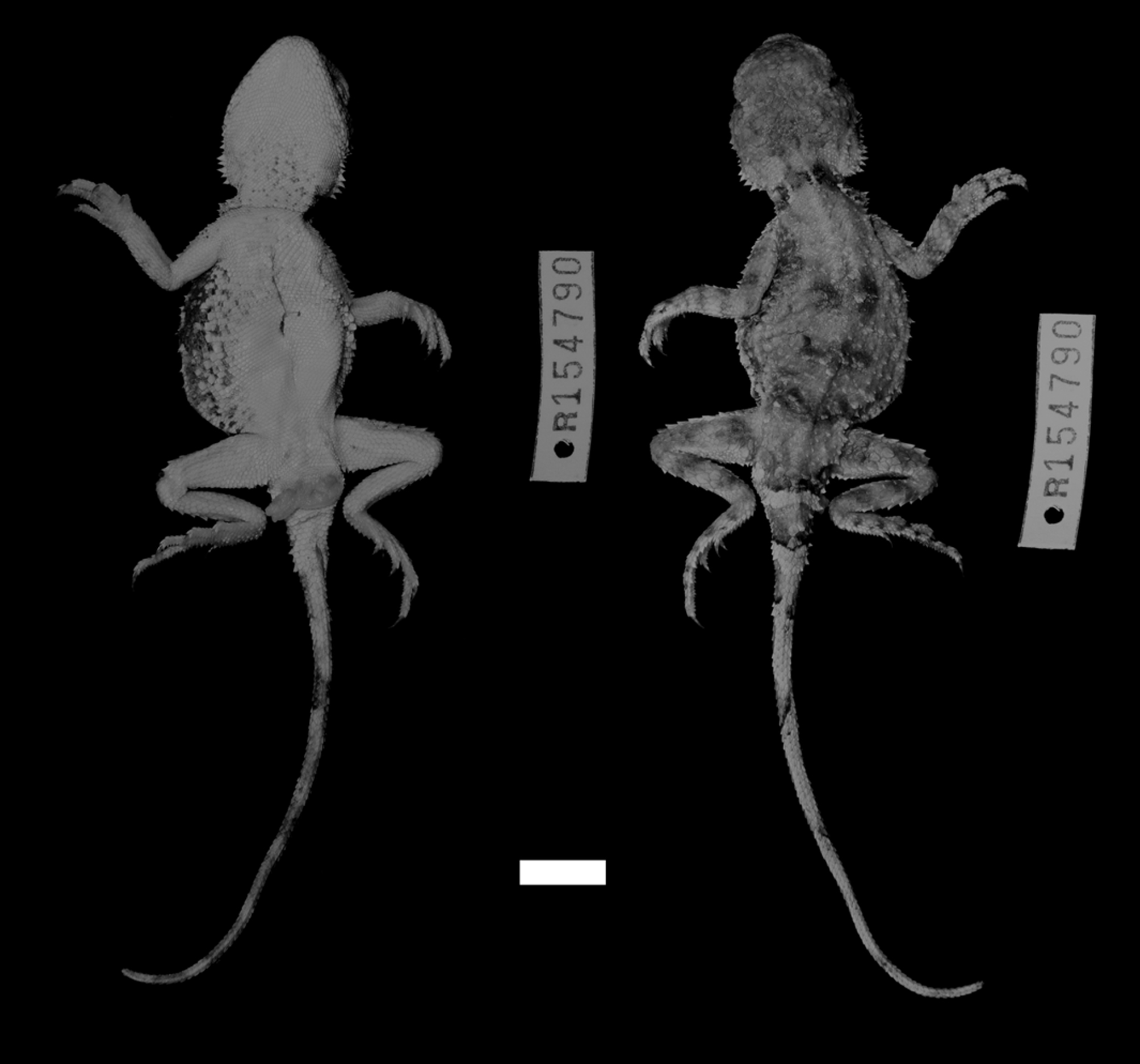