Ecology: Brachoria sheari   specimens were collected during the day (12:06) in a forest comprising maple, sycamore, dogwood, oak, and buckeye trees. Individuals were found beneath layers of decomposing leaf material at the bottom of a dry streambed just east of the trail. Other xystodesmids encountered sympatrically at these localities are B. cedra   , B. dentata   , and A. v. corrugata   . Note: individuals of B. sheari   may easily be confused in the field with B. cedra   , B. dentata   , and A. v. corrugata   as a result of very strong similarity in colour patterns, but can be distinguished from the other Brachoria   by the diagnostic characters and from A. v. corrugata   by the presence of the following characters (viewed with a 20¥ loupe): acropodite with midlength transverse groove, cingulum; acropodite bulky, three-fifths width of tibia on leg pair 9, bulged distally beyond cingulum, semiglobose ( Fig. 34C View Figure 34 ); acropodal apex 5 ¥ narrower than postcingular region, hook-shaped ( Fig. 34B View Figure 34 , arrow); acropodite not circular like in A. v. corrugata   .

Distribution: Known only from four localities on Cumberland Mountain: two sites very close to each other on the Virginia side of the mountain at its base, one from the Ridge Trail on top of the mountain, and another on the Kentucky side of the mountain near Shillalah Creek. The closest known Brachoria species   , B. cedra   and B. dentata   , co-occur with B. sheari   and share a strong mimetic resemblance. This species was provisionally referred to as Brachoria species   ‘n’ in Marek & Bond (2009).

Etymology: This species is named in honour of Professor William Shear of Hamden-Sydney College, Virginia. A mentor and friend who collected this species atop Cumberland Mountain while hiking its ridge trail and documenting the millipede biodiversity of the region. (The specific name is a genitive noun derived from the person who discovered it, Professor William Shear.)

Ecology: Brachoria splendida   is common in the Appalachian mixed mesophytic deciduous forests along Pine Mountain in Kentucky. It occurs in upland forests comprising oak, maple, tulip poplar, sycamore, and sassafras (e.g. Kentenia State Forest localities); and in moist lowland forests comprising hemlock, birch, umbrella magnolia, and rhododendron (e.g. Hemlock Garden, Cawood, and Blanton Forest). Other xystodesmids encountered sympatrically at these localities are: B. hansonia (Hemlock Garden)   , B. flammipes (Cawood)   , B. gracilipes   and B. badbranchensis   (Bickford Nature Preserve), and C. g. latassa (Kentenia State Forest localities). Note: individuals of B. splendida   may be confused in the field with B. hansonia   , B. flammipes   , B. gracilipes   , B. badbranchensis   , and C. g. latassa as a result of similarity in colour pattern, but can be distinguished with the diagnostic characters for Brachoria species   and by the presence of the following characters for C. g. latassa (viewed with a 20¥ loupe): dorsal cuticle smooth, not rugose like C. g. latassa; gonopodal acropodite bulky, about equal to width of tibia on leg pair 9; prefemur with small, stout thorn-like prefemoral process, not long, aciculate as in C. g. latassa; acropodite distal beyond cingulum S-shaped medially ( Fig. 35B View Figure 35 ), not straight as in C. g. latassa; acropodite curved medially in D-shaped form ( Fig. 35D View Figure 35 ); acropodite projecting straight from prefemur, whereas in C. g. latassa (and other individuals in the tribe Rhysodesmini   ) acropodite is bent anteriorly at 90° from prefemur. 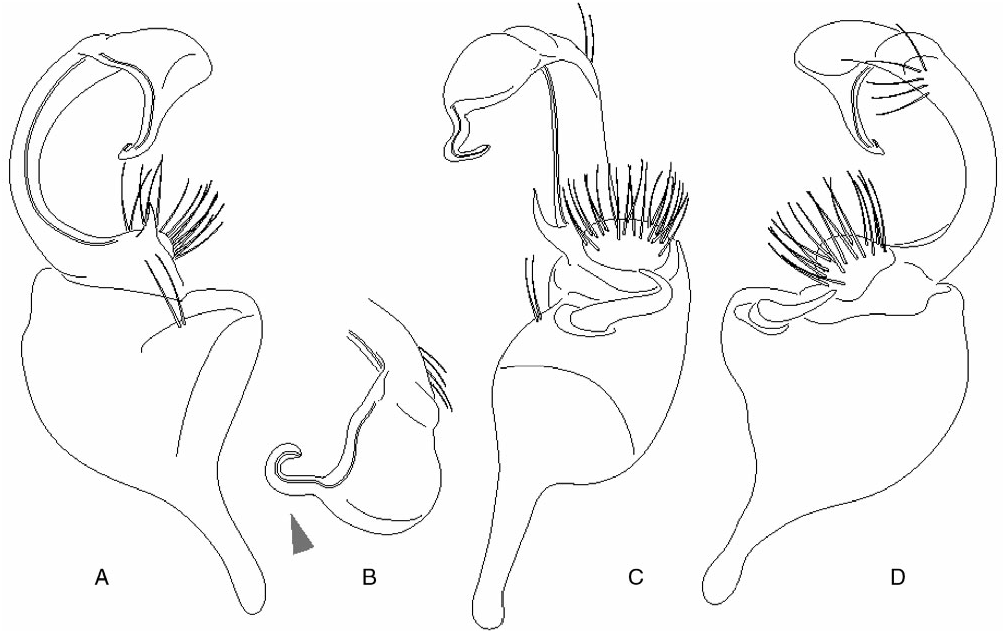