IDENTIFICATION: Micronycteris homezi was originally described by Pirlot (1967), who considered it a subspecies of M. megalotis . Prior to the present study, the only specimens referred to homezi were those of Pirlot’s type series from the Maracaibo Basin of northwestern Venezuela (ca. 2200 km WNW of Paracou). Simmons (1996b: 4) discussed the brief history of this taxon:

Micronycteris megalotis homezi Pirlot, 1967 , was named based on three specimens collected in the western Venezuelan state of Zulia. These specimens (including the holotype) were destroyed along with the rest of Pirlot’s collection sometime during the 1970s (Pirlot, phone conversation with T. Griffiths). The published description of homezi is incomplete, but several features described by Pirlot (e.g., pale venter, deep notch in ear membrane) suggest that homezi is not related to megalotis . It is not clear from the type description if homezi represents a distinct species or is synonymous with minuta , schmidtorum , or sanborni .

Simmons (1996b) found Pirlot’s description of homezi to be inadequate for several reasons, including (1) no description of the dentition, (2) no measurements other than length of the forearm, and (3) no mention of relative size of the calcar. The only truly distinctive character of homezi described by Pirlot was a ‘‘creux cutané glabre’’ (smooth cutaneous fossa) on the top of the head between the ears behind the interauricular band. Pirlot (1967: 265) described this peculiar structure as follows:

An accompanying drawing of the dorsum of the head with the ears and interauricular band folded forward (op. cit.: fig. 1) shows little more than the location of the structure in question. Although Pirlot did not explicitly discuss sexual dimorphism, he apparently had both male and female examples of homezi in hand (op. cit.: 262), suggesting that the cutaneous fossa is present in both sexes.

Having never seen a structure resembling Pirlot’s cutaneous fossa, Simmons (1996b) inferred that he was just describing the naked patch of skin that lies underneath the interauricular band and the attached hair tuft in all Micronycteris species. The interauricular band is normally folded back against the top of the head so that the posterior (ventral) surface of the band is closely appressed to the skin of the head. The cranial skin covered by the band appears naked (although a sparse coat of fine hairs can be seen under magnification), and it is fully exposed only when the ears are drawn forward. This naked patch varies in size among species of Micronycteris , being largest in species with a high interauricuar band (e.g., minuta , sanborni ) and smallest in those with a low interauricular band (e.g., megalotis , microtis ). However, this interpretation of Pirlot’s ‘‘creux cutané glabre’’ now appears incorrect.

One of the specimens that we collected at Paracou—AMNH 267414, an adult malehas a well­defined, hairless fossa on the top of the head between the ears and behind the interauricular band (fig. 30). Smooth and glabrous inside, this pit is surrounded by a rim of skin with coarse projecting hairs, exactly as Pirlot described. Although no histological work has yet been done, this structure appears to be a glandular pouch or a pouch in which glandular secretions might be stored. To the best of our knowledge, this structure is unique among bats (for a summary of known chiropteran glandular structures, see Quay, 1970).

Several other characters of our specimen correspond with Pirlot’s (1967) description of homezi , including (1) small size (forearm length 36.5 mm in Paracou specimen, 31.4– 37.4 mm in Pirlot’s series), (2) a pale venter (much lighter than the dorsal fur), and (3) a high interauricular band divided into roughly triangular flaps by a deep median notch. Because our material agrees closely with Pirlot’s description, and because of its clear distinctness from any other named congeneric form, we conclude that AMNH 267414 represents a valid species that should be called Micronycteris homezi .

The congeneric species that most closely resembles homezi in external morphology is minuta . In addition to similar size, fur color, and form of the interauricular band, both homezi and minuta have a calcar that is noticeably shorter than the hindfoot. The later character was previously thought to be uniquely diagnostic of minuta within Micronycteris (e.g., see key to species in Simmons, 1996b: table 3). Indeed, we initially misidentified our specimen of homezi as minuta before noticing the cutaneous fossa and other differences. Comparisons of our material from Paracou indicate that homezi and minuta are distinguished by numerous features, including the following: (1) a cutaneous fossa is present on the top of the head in homezi but absent in minuta ; (2) the triangular skin flaps that comprise the interauricular band are higher in homezi (height of flap equal to width of flap at base) than in minuta (height of flap slightly less than width at base); (3) the white base of each hair in the pelage of the upper back comprises approximately ¼–½ of the length of each hair in homezi , whereas the white base comprises ½–⅔ of each hair in minuta ; (4) the length of the fur over the upper back is approximately 7–8 mm in homezi , while it is shorter (5–7 mm) in minuta ; (5) the fur on the outside of the medial third of the pinna is long (7–8 mm) in homezi , but is much shorter (≤ 3 mm) in minuta ; (6) the second phalanx of wing digit IV is shorter than the first in homezi , while these phalanges are subequal in minuta ; and (7) P3 and P4 are subequal in anteroposterior length and the height of P3 is very slighly less than that of P4 in homezi , but P3 is noticeably smaller than P4 in minuta .

There are also size differences between Micronycteris homezi and M. minuta where they occur sympatrically at Paracou (table 25), although the small sample sizes must be noted. In our material, homezi appears slightly larger than minuta in body weight, forearm length, tibia length, and in all craniodental measurements. Some of these differences are trivial, but we expect that others (e.g., differences in tibia length, greatest length of skull, postorbital breadth) will be shown ultimately to represent consistent species differences.

Comparisons with congeneric species oth­ er than Micronycteris minuta can be found under the species account for brosseti (above) and will not be repeated here (see tables 23–25 for comparative measurements). To summarize the distinctive characters of homezi (as represented by Pirlot’s original description and our single specimen), we provide an emended diagnosis below.

FIELD OBSERVATIONS: Our single specimen of Micronycteris homezi was captured in a mistnet suspended 18–21 m above a narrow dirt road through well­drained primary forest. Interestingly, this was the only example of Micronycteris that we took in an elevated mistnet at Paracou. 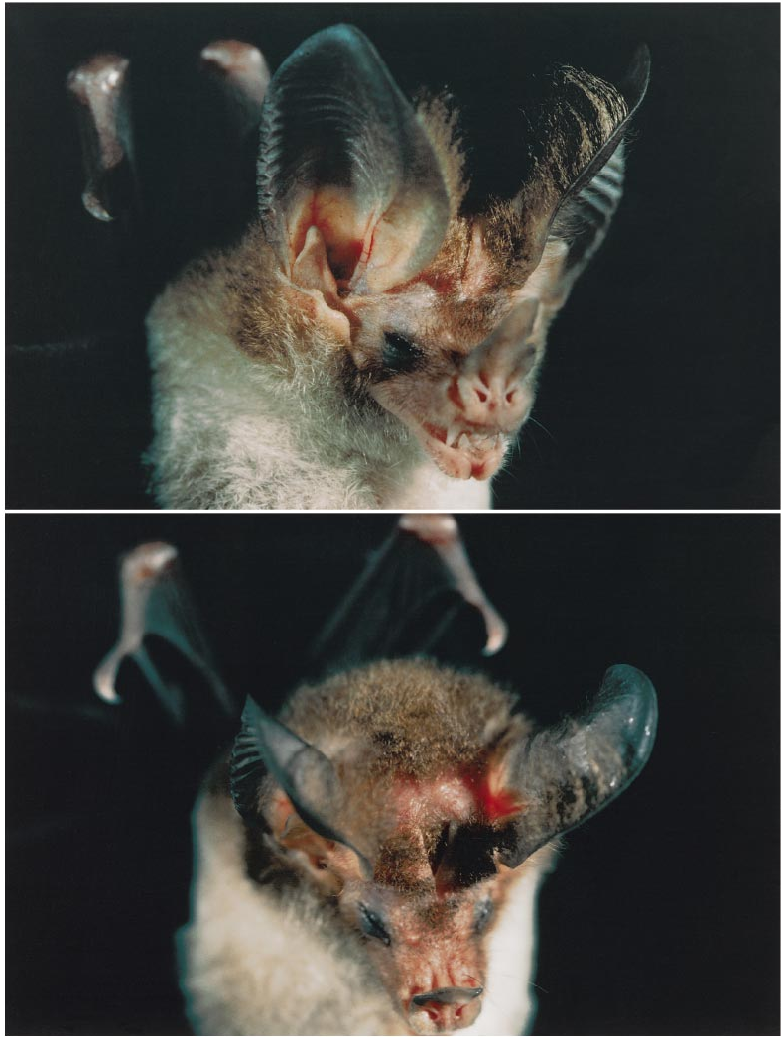 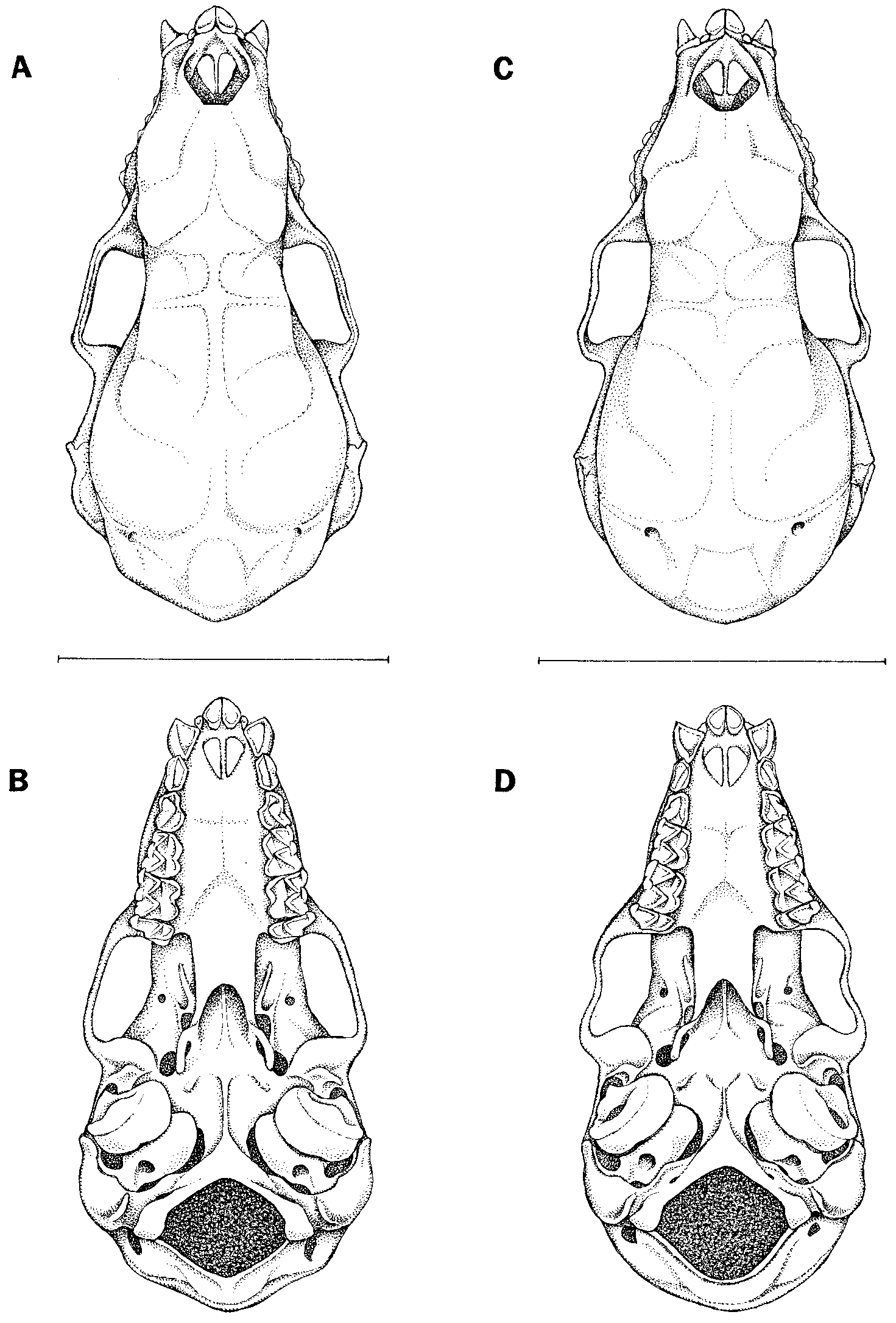