Italian noun used in heraldry to refer to a line along the middle, referring to the longitudinal scutellar groove present in females.

Differs from other Australosema   by the presence of a longitudinal median groove on the frenum of females, and similar to some of the included species, the frons is rugose-reticulate and the lower face smooth. The female also has F2 much narrower than F4, not longer than F3, with few longitudinal sensilla (Fig. 9 View Figures 7–12 ). Males are very similar to those of A. valgius   (Walker), but differ in having a mostly or entirely dark brown scape (Fig. 8 View Figures 7–12 ), while that of A. valgius   is almost entirely yellow.

Metasoma (Figs 11 View Figures 7–12 , 13 View Figures 13–14 ). Petiole 0.9-1.1 × as long as metacoxa, 2.4-3.1 × as long as broad, transversely rugose-reticulate and with a few short longitudinal wrinkle-like carinae; basally truncate with at most a weak basal flange. Antecostal sulcus of Gs1 smooth to finely sculptured laterally; acrosternite smooth. Cercus with 1 curved seta that is much longer than the others. Hypopygium with a few short setae and 1 longer posterolateral seta on each side (Fig. 13 View Figures 13–14 , lhs). Ovipositor dorsal valve with 7-8 medially interrupted annuli; ventral valve with 4-5 weakly defined teeth, and with oblique subapical carina immediately basal to toothed apex (Fig. 13 View Figures 13–14 , ocv).

Length 2.4-2.6 mm. Scape dark brown for most or all of its length (Fig. 14 View Figures 13–14 ), yellowish in only a small basal area if at all; antennal flagellum densely covered with short decumbent setae, with longitudinal sensilla extending beyond funicular apices; F7 shorter than F6 and F8; entire antenna dark brown and scape with metallic luster. Frenum without longitudinal groove; axillula with reticulate sculpture and longitudinal carinae. Metatibia dark brown except at apices. Petiole 5.9-7.4 × as long as broad, 2.2-2.6 × as long as metacoxa, narrow at midlength, reticulate. 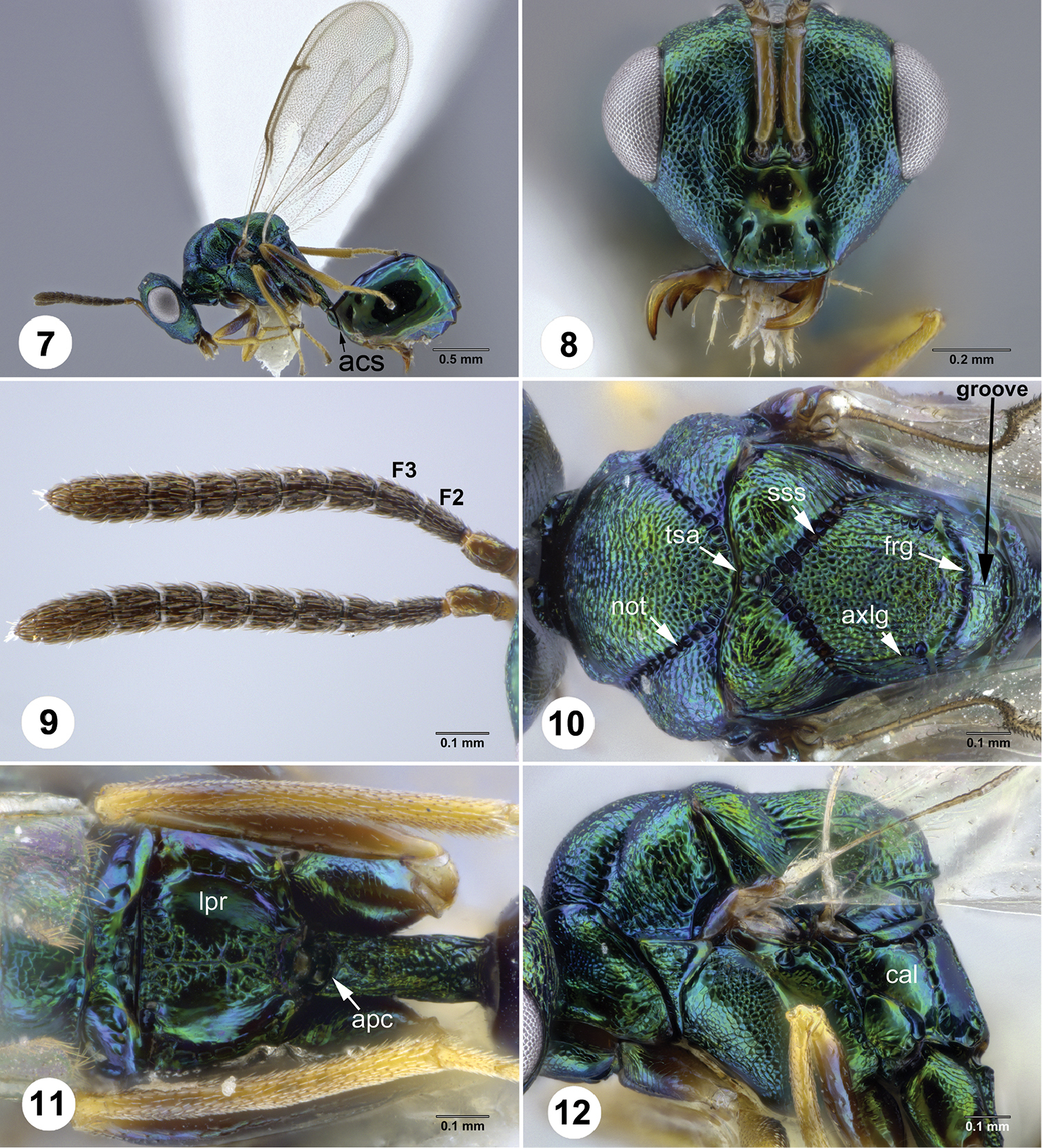