Hypnea platyclada   is similar to H. volubilis   by the epiphytic habit, the flattened shape of the main axis and the cortical cells of unequal size in surface view, but can be distinguished from this species due to the cylindrical stipe, clear central filament, lenticular thickening restricted to the extremities of the cells of the axial filament and tetrasporangia and spermatangia in one side of the cortical region of branchlets.

Distribution and habitat: ⎯ Hypnea platyclada   is known from Apuã and Mucugê Beachs, extreme south of Bahia, Brazil ( Fig. 17 View FIGURE 17 ). The specimens were collected in midlittoral, frontal zones of the reef, and in pools.

Etymology: ⎯The specific epithet refers to the flattened thallus characteristic of this species.

Observations: ⎯Plant epiphytic, prostrate, firm and rosy, measuring 1−3 cm in height, attached to the substratum by a prostrate stoloniferous portion (1.5 cm length) and several discoid holdfasts originated on the margins and underside of the thallus almost completely adhering to the host plant. Branches formed by a cylindrical stipe 667−911 µm in diameter, and flat upper portions, 108−2046 µm width and 99−644 µm thick in cross section in the middle region. The plant is irregularly branched, with few branchlets arising at the margins of the axes, 0.5−3.5 mm long. The apices of the branches and branchlets are acute, ending in a sharp apical cell. There are unicellular hairs around the apex. The organization is uniaxial, and the structure type is pseudoparenchymatous, with axial filaments forming conspicuous "midribs". A lenticular thickening is restricted to the ends of the cells of the axial filament. There is an anastomosis between the branches. In cross section, the middle region of the blade has an oval, pigmented axial cell (54−212 µm length and 19−76 µm in diameter), 5−6 oval periaxial cells (244−276 µm length and 88−144 µm in diameter), two layers of oval to circular, hyaline medullary cells (73−113 µm length and 90−174 µm in diameter, gradually smaller towards the periphery), and a layer of isodiametric, pigmented cortical cells but with variable size, 8−79 µm in diameter in surface view. The tetrasporangia are zonate, 73−99 µm length and 41−47 µm in diameter, formed in the middle and upper regions of the branchlets, arranged on only one side of the branchlets and producing a bending of the latter. The cystocarps are globose, slightly constricted at the base, produced from the base to the apex of the branches, 833−934 µm length and 714−826 µm in diameter, with 3−5 layers of rounded cells in the pericarp and without evident ostioles. The carposporangia are spherical, 25−43 µ m in diameter, arranged in a group at the apex of the columnar gonimoblast. Spermatangial sori are arranged on one side of branchlets. Spermatangia are 1.4−3.7 µm in diameter.

Comparison with related taxa: ⎯ Hypnea volubilis   was described by Schneider & Searles (1976) and is characterized by a flattened thallus that distinguishes it from its Atlantic congeners, which have cylindrical thallus. Hypnea platyclada   was initially identified as H. volubilis   because of its flattened shape of the main axes and the cortical cells of unequal size in surface view. However, a detailed analysis of the literature and of the type material of H. volubilis   revealed significant differences in habit, habitat and reproductive structures ( Table 1).

The thallus of Hypnea platyclada   is flat and has a cylindrical estolon and stipe, being adhered to the host algae by numerous fixing discs (“pads”), but without entwining up on it as in H. volubilis   , whose thallus is lax and lanky as described in the literature ( Schneider & Searles 1976, 1991, Dawes & Mathieson 2008) and as analyzed in the material examined (holotype DUKE 14135! and isotype DUKE 14134!). The specimens of H. volubilis   do not have cylindrical stipes, the thallus being completely flat, with scarce “pads”.

The Hypnea volubilis   material described by Schneider & Searles (1976) was collected at a depth of 15−40 m in North Carolina, South Carolina ( USA) and Puerto Peñasco, Sonora ( Mexico). Other studies also reported the occurrence of this species in subtidal sectors: 17−60 m depth in Puerto Rico ( Ballantine & Aponte 1997) and 23−45 m depth in North Carolina, South Carolina and the Gulf of California ( Schneider & Searles 1991), including the Brazilian coast (10−20 m depth, Amado-Filho et al. 2006). The specimens of H. platyclada   were collected in the intertidal zone at the most hydrodynamic region of the reef, and at the pools formed during the syzygy low tides.

Hypnea saidana   and H. variabilis   are species also characterized by presenting compressed to flat thalli. Hypnea saidana   resembles H. platyclada   because of the axis branched in one plane, however it can be easily distinguished from the Brazilian species by the presence of curved branchlets forming an intricate caespitose clump, as can be seen in its original description ( Holmes 1895). In addition, H. saidana   is also much larger, measuring 6−10 cm high ( Okamura 1909, Tanaka 1941, Yamagishi & Masuda 1997).

Despite having the most ancient branches strongly compressed, Hypnea variabilis   differs from H. platyclada   by the height, the attachment to the substrate, the habit and the disposition of tetrasporangia sori ( Table 1). Hypnea platyclada   has a strongly prostrating thallus due to the large number of “pads”, while H. variabilis   has an erect habit. The branches of H. platyclada   in cross section reveal a single, small, pigmented axial cell, hyaline periaxial cells and one or two lateral layers of medullary cells which, together with the cortical layer, fill all the internal structure ( Fig. 7); on the contrary H. variabilis   do not posses defined axial or periaxial cells but a group of small cells in the center of the thallus surrounded by larger medullary cells ( Okamura 1909, Tanaka 1941, Yamagishi & Masuda 1997). This species shows a distinct architectural pattern in cross section, having almost always a cylindrical to subcylindrical shape, the diameter of the thallus being almost entirely occupied by a small central cell and larger periaxial cells as shown in the illustrations of H. pannosa   ( Tanaka 1941, Yamagishi & Masuda 1997, Bangmei & Yongqiang 1997) and H. saidana   ( Okamura 1909, Tanaka 1941). However, it is noteworthy that specimens of compressed/flat thalli may have a weakly characterized internal structure, making it difficult to discriminate axial cell and to define accurately the number and shape of periaxial cells. 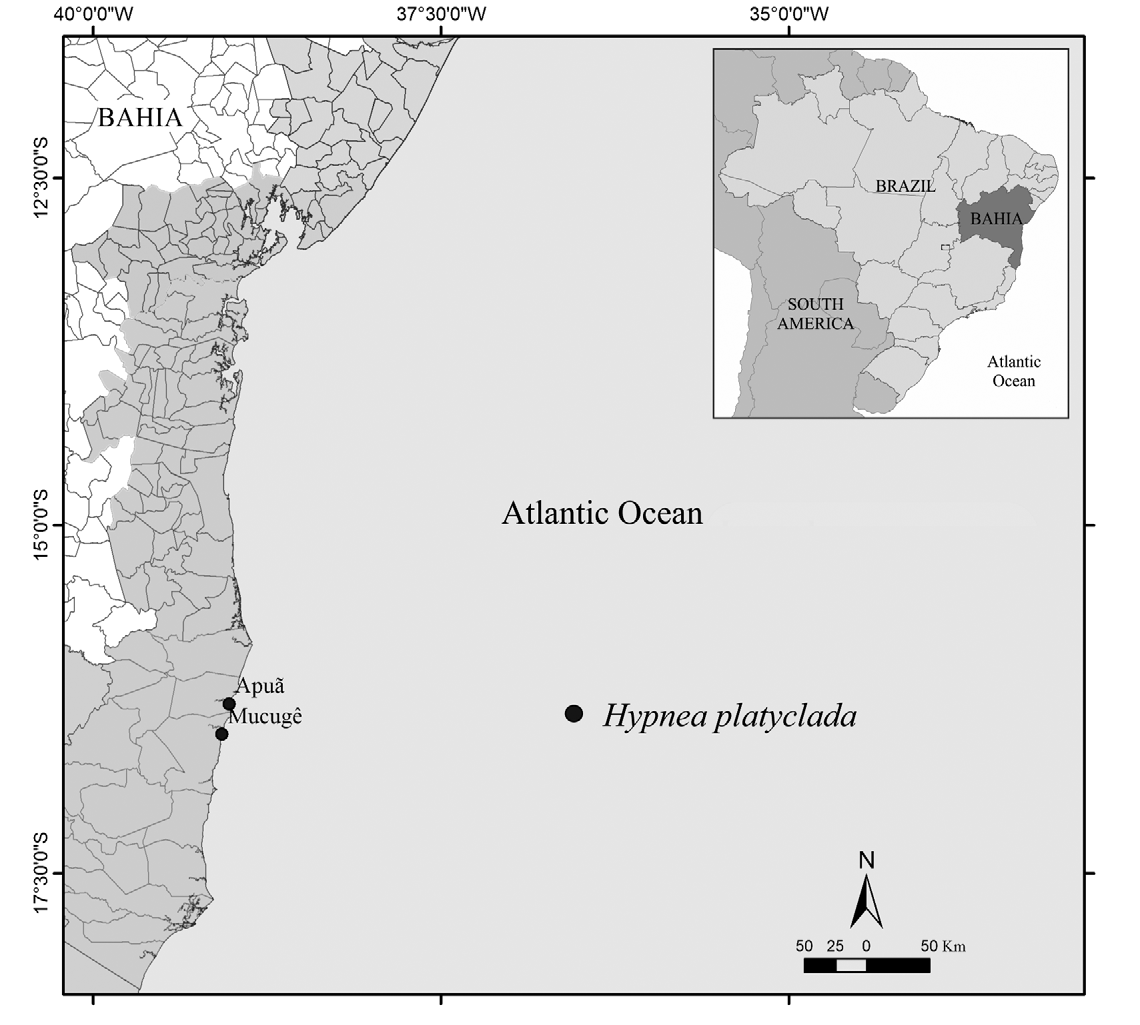 FIGURE 17: Map of the coast of Bahia, Brazil, showing the distribution of Hypnea platyclada sp. nov. 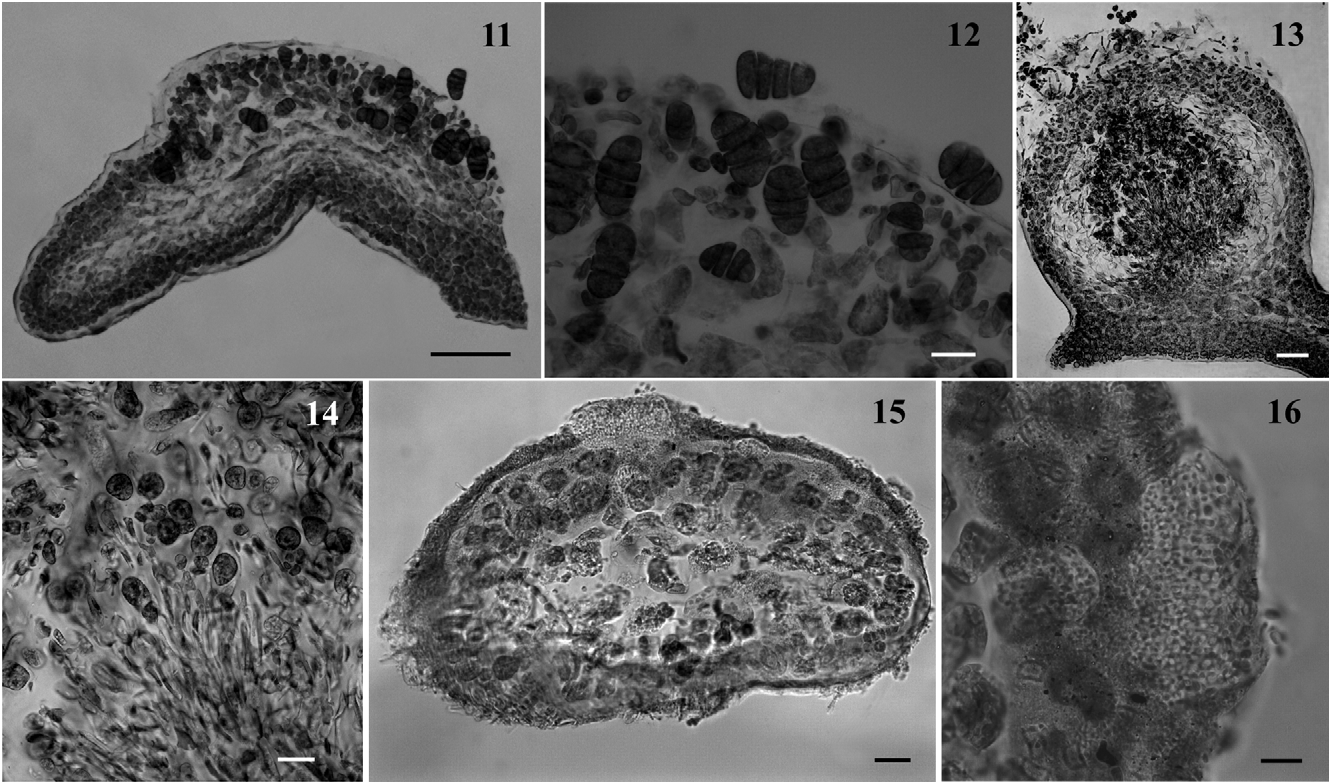