Incilius karenlipsae can be distinguished from all species of Incilius , and all species of Rhinella and Rhaebo occurring in Panama, by the unique absence of a developed parotoid gland and the unusual fully webbed hands and feet. In general appearance, I. karenlipsae is most similar to I. coniferus but differs additionally from that species by having less spinose skin and by being larger (males in I. coniferus to 72 mm SVL).

The specimen was preserved after its natural death, so some superficial skin has been lost; this gives the appearance of some areas of paler coloration on the specimen that were not evident in life. We note also that the digits on the specimen are preserved in a recurved position (see Fig. 2 View FIGURE 2 ), making evaluation of their condition difficult unless the specimen is at hand.

Coloration in life. In life, the color of the specimen was rather similar to that in preservative, however the individual nearly always appeared either nearly uniform dark brown or nearly black. Slight metachrosis (i.e., lightening of the overall hue of the dorsal surfaces to a dull brown) was observed rarely and did not seem to correlate with temperature or the day-night cycle. The iris was uniform bright green.

Etymology. This distinctive new species is named in honor of Dr. Karen R. Lips who has dedicated the majority of her career to the careful scientific documentation of amphibian declines and their causes. Her contributions to enlightening us on the realities and root causes of these catastrophic losses are extraordinary. We note especially that the type locality for Incilius karenlipsae is El Copé, Panama, where she completed her landmark study ( Lips et al., 2006) that directly demonstrated the cause-and-effect relationship between the arrival of a non-native pathogen and the subsequent decimation of an amphibian fauna.

Distribution and ecology. This species is known only from the type locality, in Tropical Moist Forest. The holotype was found in a small seep crossing a trail in the forest. A description of the locality was presented by Ryan et al. (2008).

This toad was maintained alive for several years at Zoo Atlanta in an enclosure with a sexual pair of I. coniferus that regularly displayed reproductive behaviors (e.g., advertisement calls, amplexus, oviposition). While in captivity, the male holotype was often observed climbing about on branches in its enclosure—a behavior well documented in the related species I. coniferus . No advertisement call was ever heard while the male was maintained alive, although a typical bufonid release call was noted when the animal was grasped. No cross-species reproductive interactions of any sort were observed between the pair of I. coniferus and I. karenlipsae .

Tadpoles. The tadpole of I. karenlipsae is unknown; we presume that the life history of this species includes a free-living larval stage (see Remarks, below).

Remarks. Our assessment of the phylogenetic position of I. karenlipsae , based on the addition of this taxon to the complete analysis of Mesoamerican toads (Mendelson et al., submitted) and indicates that this species is sister to the widespread species I. coniferus . Despite the considerable morphological differences between these two species (see Diagnosis, above) the holotype was originally misidentified by field crews and JRM as I. coniferus . A phylogenetic hypothesis for the position of I. karenlipsae and its apparent closest relatives is presented in Fig. 3 View FIGURE 3 . This hypothesis allows preliminary assessment of the evolution of certain salient characteristics in this clade of toads ( Fig. 3 View FIGURE 3 ). Although axillary amplexus clearly is the plesiomorphic condition in Incilius (and indeed New World toads in general), the documentation of inguinal amplexus in I. fastidiosus ( Graybeal and de Queiroz, 1992) and the lack of observations of amplexus in other species in this clade except for I. coniferus (axillary) presents the intriguing possibility that the unusual behavior of inguinal amplexus may be present in additional species. All species in this clade are characterized by having reduced parotoid glands, appearing vestigial in I. karenlipsae . Similarly, this clade is characterized by having remarkable fleshy pads on the hands and feet, and this condition is taken to the extreme in both I. karenlipsae and the three species referred to “ Crepidophryne ” in which the pads are so extensive that the digits are indistinct; (see Mendelson et al., submitted, for discussion of the taxonomic status of Crepidophryne ). The exception to this morphology of the hands and feet is in I. coniferus , which evidently has experienced an evolutionary reversal to a more plesiomorphic bufonid morphology of long, slender fully distinct digits without fleshy pads. Although we do not wish to speculate on the adaptive significance of the unusual morphology of the hands and feet of these species, it is perhaps noteworthy that a similar morphology is found among species of the Rhinella veraguensis group that have been reported to climb on rocks and vegetation (e.g., Lehr et al., 2001; Chaparro et al., 2007). Even though it lacks fleshy pads, Incilius coniferus is well known for its proclivity to climb into trees.

The conservation status of this species is uncertain. We are unaware of any additional specimens of this species present preserved or alive in collections in the USA or in Panama (R. Ibáñez, personal communication). We note also that this species evidently was not observed in the environs of El Copé, Panama, during extensive field surveys (summarized in Lips et al., 2006). To us, this suggests that the species is relatively rare and/or secretive. Although its total distribution cannot be posited based on a single specimen, it is possible that the species is restricted to the immediate environs of Parque Nacional G. D. Omar Torríjos, El Copé, Coclé Province, Panama. The susceptibility of this species to the amphibian disease chytridiomycosis—which is now established in that region ( Lips et al., 2006)—is entirely unknown. Based on its presumed rarity, unknown distribution, and potential susceptibility to chytridiomycosis, we recommend that this species be recognized as Critically Endangered on the IUCN Red List (www.iucnredlist.org). We encourage additional field work in the area to determine if a population is extant. 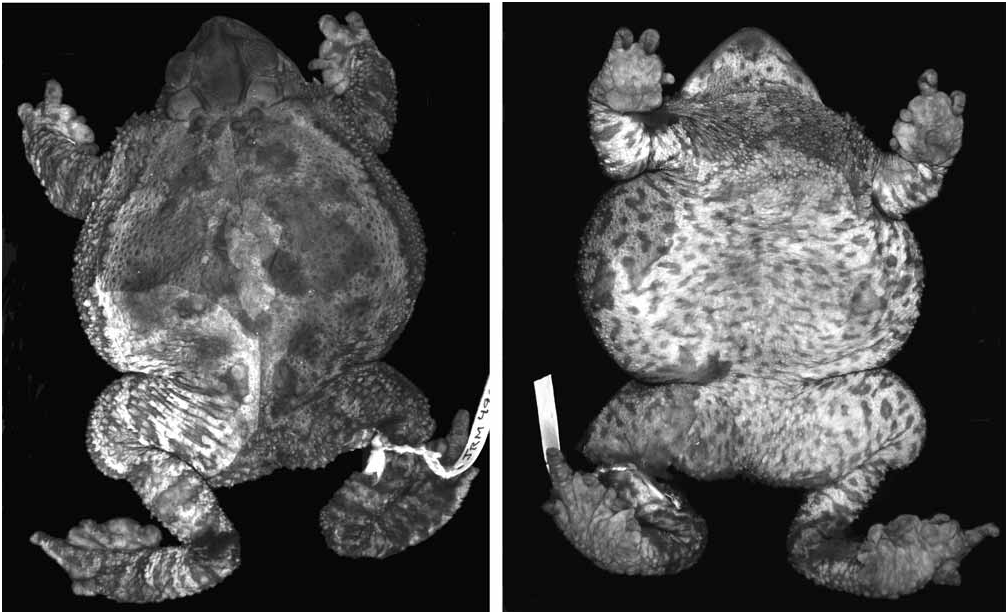 FIGURE 1. Dorsal and ventral views of the holotype and only known specimen of Incilius karenlipsae (UTA A-59522; adult male; SVL = 89.3 mm). Note that superficial epidermal layers have come loose in some areas on the specimen. A dorsal color pattern is evident in the specimen, but in life the toad was nearly uniform gray-black dorsal coloration, regardless of temperature or other environmental variables. 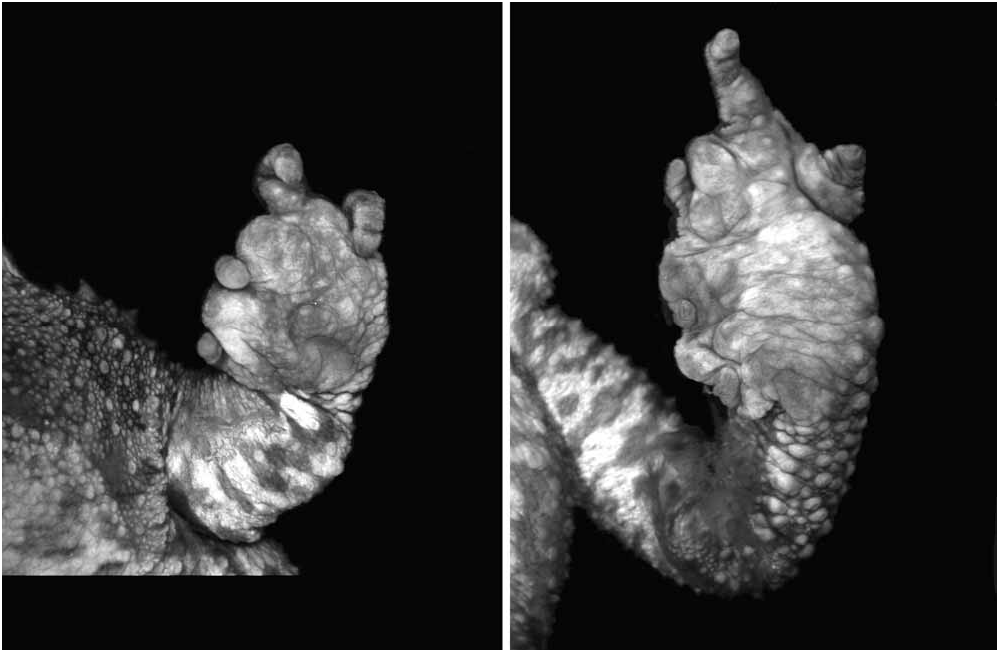 FIGURE 2. Hand and foot of the holotype of Incilius karenlipsae (UTA A-59522; adult male; SVL = 89.3 mm). Note that fingers on the hand are unnaturally flexed ventrally in the preserved specimen, making evaluation of their condition difficult unless the specimen is at hand.

FIGURE 2. Hand and foot of the holotype of Incilius karenlipsae (UTA A-59522; adult male; SVL = 89.3 mm). Note that fingers on the hand are unnaturally flexed ventrally in the preserved specimen, making evaluation of their condition difficult unless the specimen is at hand. FIGURE 3. A cladogram derived from this study and Mendelson et al. (submitted) showing the phylogenetic position of Incilius karenlipsae as the sister taxon to I. coniferus determined in this study (parsimony bootstrap = 100%; Bayesian posterior-probabilities = 1.0). The phylogenetic placements of I. peripatetes, I. holdridgei, C. epiotica, and C. guanacaste are inferred based on morphology (DNA samples are not available). The evolution of several salient characteristics of the group are reconstructed; see text for discussion.