The bifurcated tibial apophysis is only shared with S. maddisoni Cutler, 1985   and S. paraensis Galiano, 1967   . However, both species can be separated from S. nicaraguaensis   by a larger bulb (65% of cymbium length in S. maddisoni   and 80% in S. paraensis   ) and the different size and shape of the lobes of the retrolateral tibial apophysis (cf. Fig. 5F View Fig with Chamé-Vázquez et al. 2020: figs 14–15). The female habitus ( Fig. 4C View Fig ) and the almost round spermathecae ( Fig. 5D View Fig ) are shared with the female of S. maddisoni   . Females of S. maddisoni   can be distinguished from those of S. nicaraguaensis   by an epigyne with a U-shaped flap, which is wide and short in S. nicaraguaensis   (compare Fig. 5C View Fig with Chamé-Vázquez et al. 2020: fig. 11).

Four different color morphs were observed in males ( Fig. 9B–D View Fig , Table 1 View Table 1 ), with no apparent ontogenetic change in body color. The forms included orange-reddish, completely light brown or dark brown forms (all locations), and variants with dark orange carapace and black abdomen (La Guardia and Villa Teresa). In a sample of 51 females, 92% were orange with a pair of black spots on the posterior half of the abdomen ( Fig. 9A View Fig ), and 8% dark brown. Orange males with dark spots on their abdomen were not observed. The comparably even distribution of color forms among males, the high number of orange females, and the lack of orange forms with black abdominal spots in males indicate sex-specific polychromatism.

The localities in Nicaragua and Bolivia are more than 3500 km apart, which is remarkable for such a small arthropod, and would suggest a certain degree of reproductive isolation between both populations. However, the epigyne (examined from drawings by Cutler 1993) and external morphology (examined from photographs of the type) are similar in the type specimen of S. nicaraguaensis   and the Bolivian material. Another species with a wide distributional range, S. americana   , occurs from Mexico to Venezuela ( Cutler 1981b). The other two Bolivian species of Synemosyna   have also comparably wide distribution ranges ( Fig. 7 View Fig ). The widest collection locations of S. aurantiaca   are about 2200 km apart, and of S. myrmeciaeformis   about 3100 km. Molecular studies are needed to test whether the low grade of morphological differentiation in these species represents a high gene flow. 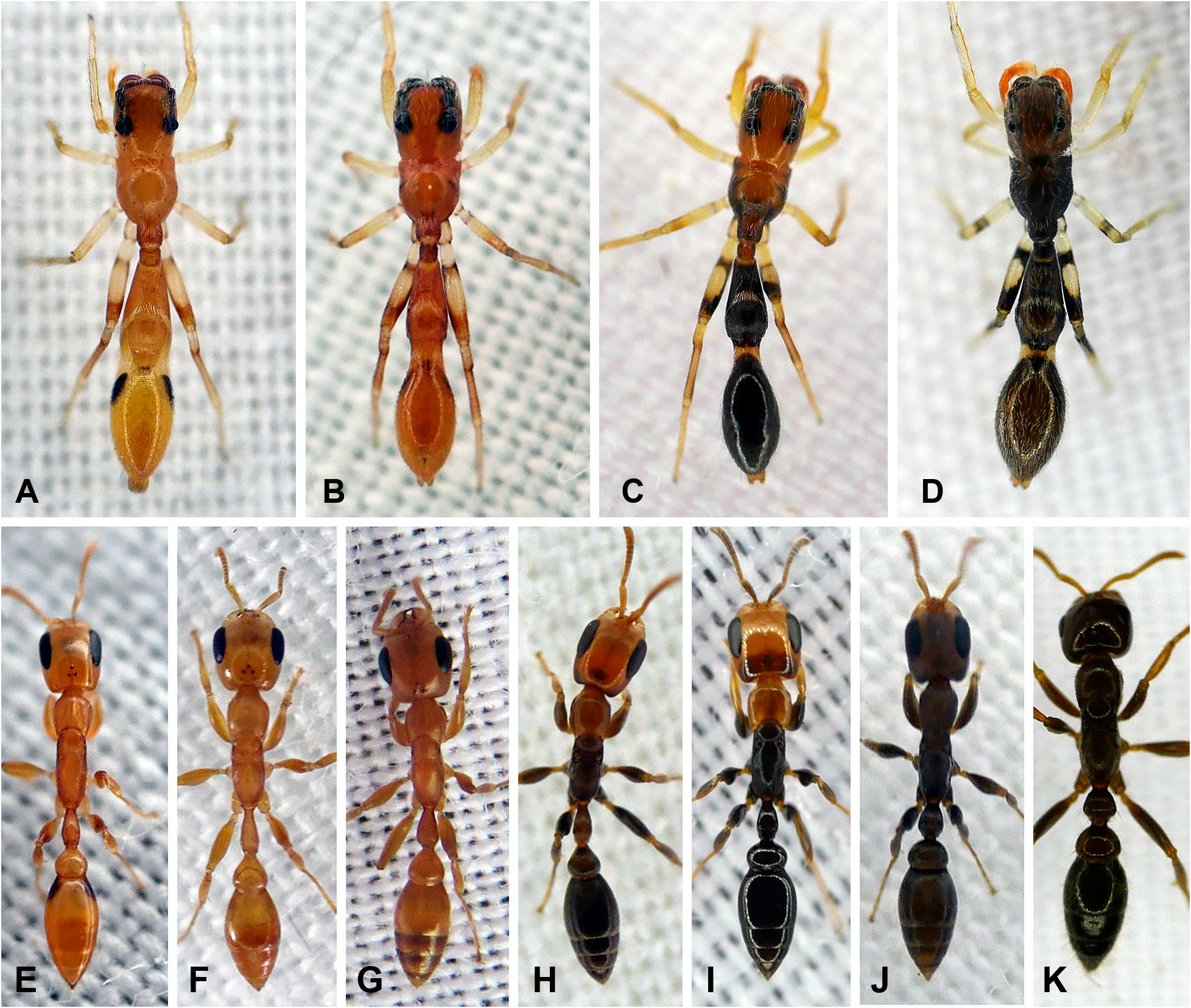