Description. Male. Medium-sized for genus, shiny, and relatively uniformly colored ( Fig. 25A View FIGURE 25 ): head and majority of tergites brown but with lower half of epicranium, most part of mouthparts, scape, pedicel, ventrolateral parts of tergites from pronotum to subapical tergite ( Figs. 25B, C, D View FIGURE 25 ), and apical tenth abdominal tergite light brown, as well as with all ocelli and all palpi yellowish; dorsal apex of hind femur with a white and diffuse spot; rest of body from light brown to yellowish. Head ovoid with rather short and wide rostrum, and almost two times as wide as space between antennal cavities; latter space almost two times as wide as scape; ocelli round, almost equal to each other in size, and 1.5 times wider than pedicel ( Fig. 25B View FIGURE 25 ). Fore tibia only with tympana on inner side. Middle tibia with three ventral spines on each margin and two spines on each dorsal margin. Hind femur with three transversal main pegs rows with few spinules on inner side near to base ( Fig. 25E View FIGURE 25 ); hind tibia with nine spines on the dorsal outer margin, and eight spines on the dorsal internal margin. First two abdominal tergites with stridulation pegs very close to pleural membrane, these pegs are small and regularly distributed ( Fig. 25D View FIGURE 25 ). Posterior edge of the ninth tergite wavy, covering the last abdominal tergite; tenth tergite divided in the middle ( Fig. 25F View FIGURE 25 ), dorso-medial margin with hooks, conical, thickened, curved up and with a sharp apex ( Figs. 25G, H View FIGURE 25 ). Epiproct with rounded posterior edge; each paraproct lanceolate, laterally flattened, thickened, curving up near the base, armed with an apical spine ( Fig. 25I View FIGURE 25 ). Subgenital plate wider than long, conical styles, shallow and rounded posteromedian notch ( Fig. 25J View FIGURE 25 ).

Female. Similar to the male in shape and coloration ( Figs. 26A, B View FIGURE 26 ). Hind femur with two transverse main pegs rows with few spinules on inner side near to base. First two abdominal tergites with stridulation pegs as in the male, but with less number of pegs. Tenth tergite dorsally divided, rounded epiproct, paraprocts without specialization and ovoid. Subgenital plate triangular with rounded apex ( Fig. 26C View FIGURE 26 ). Ovipositor curving upward from the basal portion, apex sharp, upper valves without denticulations but with depressions on the ventro-distal margin ( Fig. 26D View FIGURE 26 ).

Etymology. The species name comes from the Latin unum: one and - tympanum, referring to the presence of only one tympanum in the fore tibia.

Karyotype. T 97- 15. 2n ♂ = 28, All 13 pairs of autosomes are rod shaped with the metacentric X the largest chromosome and the medium sized Y also a rod. This is the only species of Glaphyrosoma   known with an XY sex determination system ( Fig. 27 View FIGURE 27 )   .

Comparison. This new species is close to G. gracile   and G. paragracile   n. sp., presenting the laterally flattened paraprocts, although in G. unumtympana   n. sp., the paraprocts are wider and with a distal spine, in contrast to the other two species that have preapical spine, or elongated paraprocts, becoming S-shaped. The female ovipositor is similar to the females of G. anderi   and G. beretka   , with depressions in the upper valve, but the new species is distinguished from the other two, having depression in the ventral margin of the upper valve, in contrast to G. anderi   which has depression on the dorsal margin without reaching the apex of the upper valve, and G. beretka   with depression only at the apex of the dorsal valve. G. unumtympana   n. sp., is the only known species with tympana on one side of the fore tibia. The other species with tympana on both side of the fore tibia, except the species of the Mexicanum Group, without tympana. 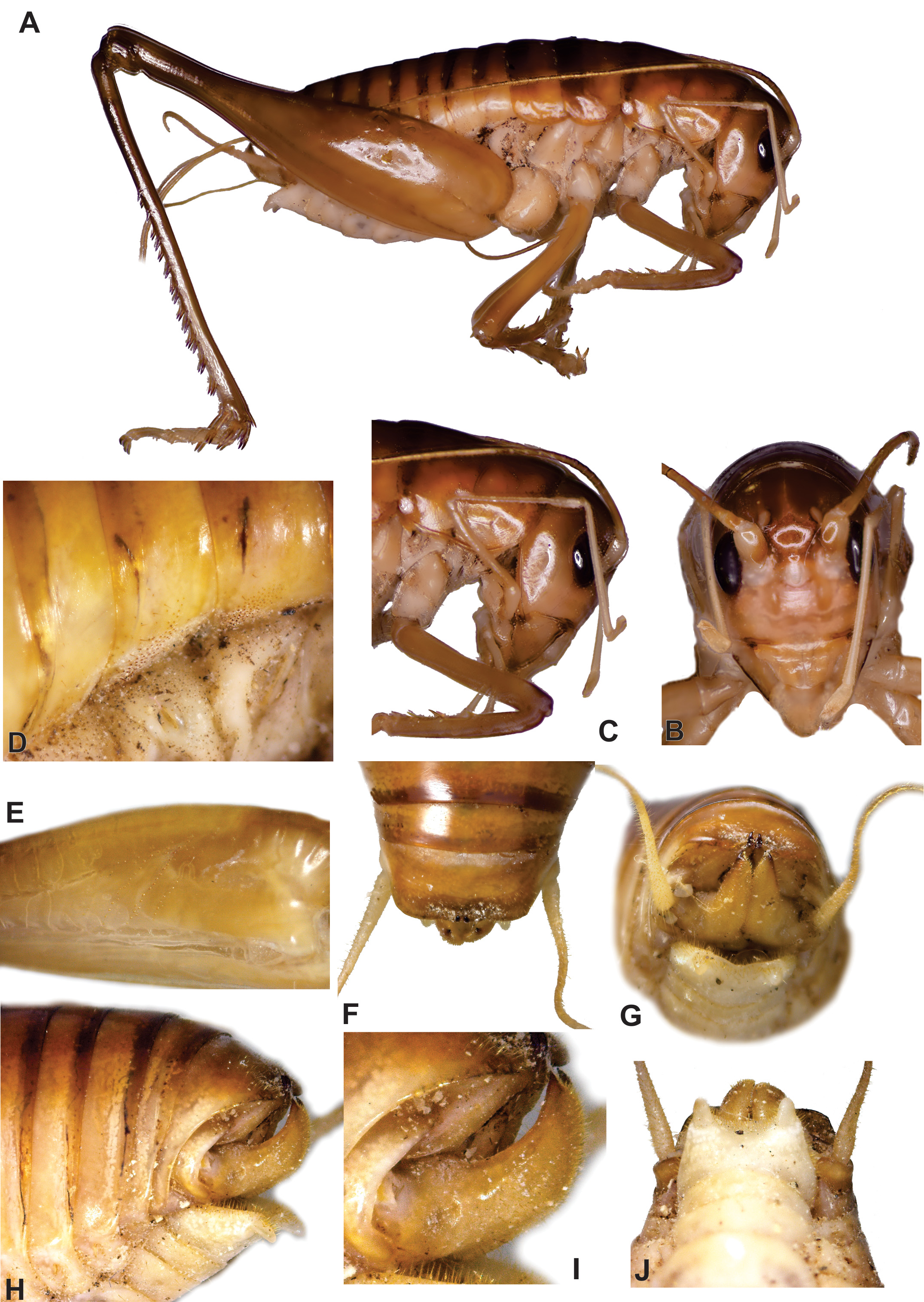 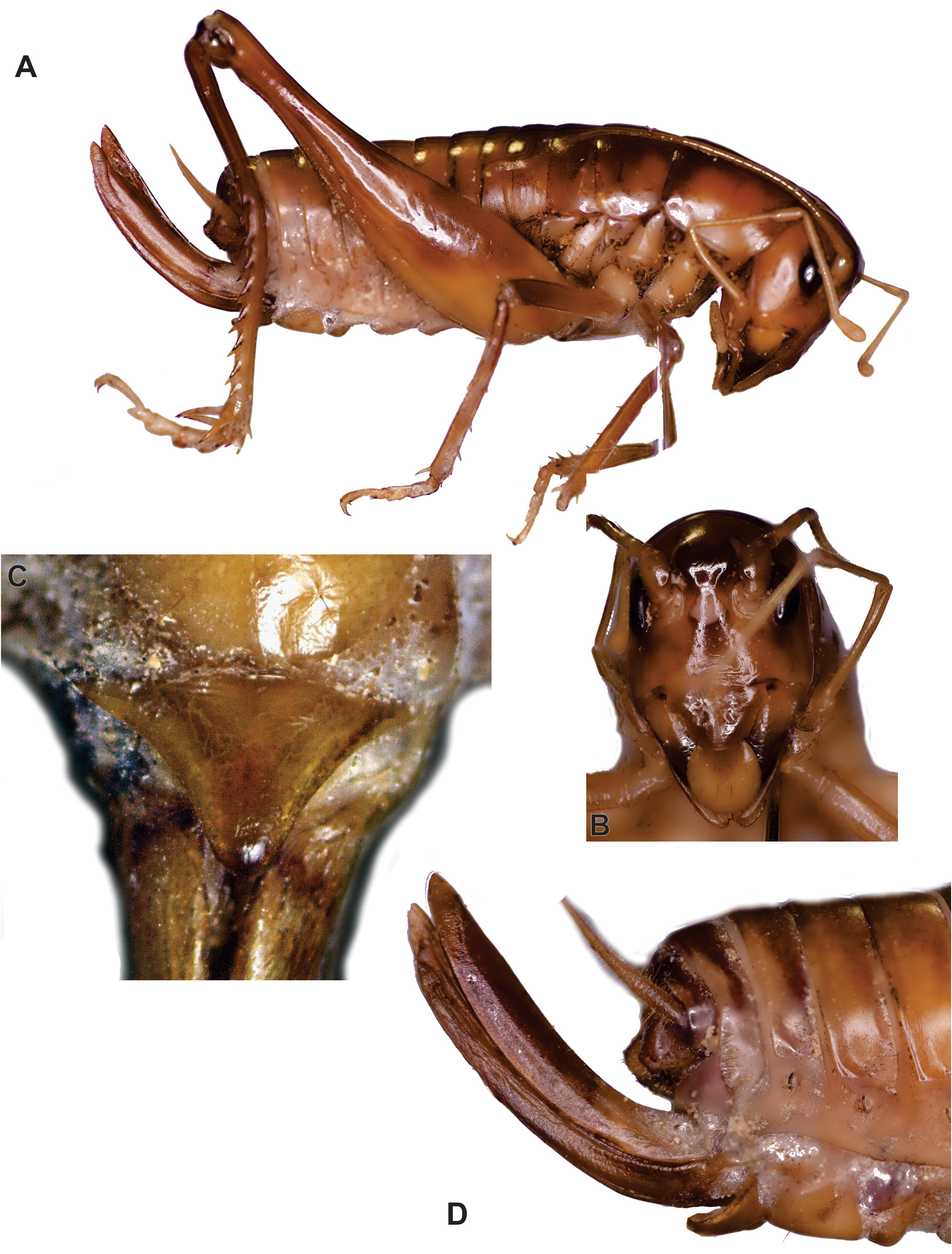