Pellegrini, Marco O. O., 2017, Morphological phylogeny of Tradescantia L. (Commelinaceae) sheds light on a new infrageneric classification for the genus and novelties on the systematics of subtribe Tradescantiinae, PhytoKeys 89, pp. 11-72: 32-33

Herbs chamaephytes, base definite or indefinite, perennial, frequently succulent, terrestrial, rupicolous or epiphytes. Roots thin, fibrous. Stems prostrate with ascending apex or erect, herbaceous to succulent, rarely fibrous, little to densely branched, rooting at the basal nodes or at the distal ones when they touch the substrate. Leaves sessile to subpetiolate; distichously or spirally-alternate, evenly distributed along the stem, rarely congested in a rosette; sheaths closed; blades flat to falcate and/or complicate, base asymmetrical, midvein conspicuous, rarely inconspicuous, adaxially impressed, abaxially prominent, rounded, secondary veins conspicuous or inconspicuous. Synflorescences   terminal or axillary in the distal portion of the stems, composed of a solitary main florescence, 1-4 per leaf axis. Inflorescences (main florescences) consisting of a pedunculate double-cincinni fused back to back; inflorescence bract hyaline, tubular, inconspicuous; peduncle bracts absent; supernumerary bracts rarely present; cincinni bracts leaf-like, rarely spathaceous, differing from the leaves mostly only in size, similar to unequal to each other, saccate or not, free from each other; bracteoles inconspicuous, imbricate, linear-triangular to triangular, hyaline. Flowers bisexual, actinomorphic, flat (not forming a floral tube); pedicel gibbous at apex, upright at anthesis and pre-anthesis, deflexed at post-anthesis; sepals equal, free, chartaceous, ovate, dorsally keeled or not, apex acute; petals sessile, equal, free, elliptic to ovate to broadly ovate, flat or plicate, base cuneate to obtuse, margin entire, apex acute; stamens 6, arranged in two series, equal, filaments free from the petals, straight at anthesis and post-anthesis, basally densely bearded with moniliform hairs, hairs as long as the stamens, white, anthers with connective rhomboid, yellow, anther sacs ellipsoid, yellow, pollen yellow; ovary white, glabrous, locules 2-ovulate, style straight at anthesis and post-anthesis, white, obconical at base, conical at the apex, stigma punctate, pistil longer than or the same length as the stamens. Capsules subglobose to globose, light to medium brown when mature, glabrous, loculicidal, 3-valved, sometimes apiculate due to persistent style base. Seeds 1-2 per locule, ellipsoid to narrowly trigonal, ventrally flattened, cleft or not towards the embryotega, testa costate to rugose with ridges radiating from the embryotega, embryotega dorsal, relatively inconspicuous, without a prominent apicule.

As stated by Hunt (1980), T. subg. Austrotradescantia   is the only exclusively South American group in the genus, occurring in Bolivia, Brazil, Paraguay, Uruguay and Argentina (Fig. 8 View Figure 8 ). Its species can be found growing understory in moist and shady forests in the Atlantic Forest domain, open fields, rocky outcrops, and are especially common in disturbed areas.

Tradescantia subg. Austrotradescantia   can be easily recognized by its generally distichously-alternate leaves (a character uncommon for the genus; Fig. 9A & B View Figure 9 ), sepals elliptic to broadly elliptic, all keeled (Fig. 9G View Figure 9 ); filaments basally, densely bearded with long moniliform hairs (Fig. 9E View Figure 9 ); style obconic at base and conic at apex, stigma punctate with type D papillae ( Owens and Kimmins 1981; Fig. 9K View Figure 9 ); seeds with costate testa, and relatively inconspicuous embryotega (Fig. 9L View Figure 9 ). Added to these morphological characters, the small bimodal and numerous chromosomes (n = 10-numerous), and a unique chemical profile, set this group apart from the other four subgenera. A complete taxonomical revision of this subgenus is in the works by me ( Pellegrini 2015, in prep), and should provide the necessary tools for proper species identification and name application in the group. Regarding taxonomically informative characters, leaf morphology can easily differentiate the two observed morphological groups. The presence of a definite and indefinite base is also helpful and probably connected to the understory habit of many species. Aside from that, cincinni bracts are extremely useful for species delimitation. They can be either saccate or not at base (see below), leaf-like or spathaceous (e.g. T. umbraculifera   and T. valida   ), and the symmetry between both cincinni bracts is also very useful in differentiating some closely related species. Furthermore, T. valida   is the only species in T. subg. Austrotradescantia   to possess supernumerary bracts.

Two morphological groups can be clearly observed in T. subg. Austrotradescantia   , being also recovered in the present study (Figs 3 View Figure 3 , 4 View Figure 4 ). The T. fluminensis   group is composed by more delicate plants, with prostrate stems ascending at the apex, cincinni bracts saccate at base, and generally white petals. A marking exception is the T. tenella   complex, which possess erect stems, flowers that range from white to pink, seeds with rugose testa, and hilum always shorter than ½ the length of the seeds. Nonetheless, its species generally possess subpetiolate, membranous to chartaceous leaves, and conspicuous mid and secondary veins, which are characters common to the T. fluminensis   group (Figs 3 View Figure 3 , 4 View Figure 4 ). Since the leaves vary from membranous to chartaceous to slightly fleshy, venation pattern is very useful for species differentiation inside this clade. Both T. fluminensis   and T. mundula   possess leaves with adaxially impressed secondary veins, while T. cymbispatha   and T. chrysophylla   possess inconspicuously impressed secondary veins. The species in this group occur almost exclusively in Tropical and Subtropical Rainforests, but are also commonly found growing as weedy plants throughout their distribution range.

The T. crassula   group is composed by succulent plants (which generally grow in open areas), with erect stems, cincinni bracts not saccate at base, petals ranging from white to pink to lilac, and seeds cleft towards the embryotega. The leaves from these species are sessile and extremely succulent, with only the midvein conspicuous, and secondary veins rarely conspicuous in T. crassula   . Nonetheless, in some individuals of T. crassula   , T. seubertiana   and T. valida   , the leaves are so succulent that even the midvein is adaxially inconspicuous. Great petal color variation can be found within the same population, under the same ecological conditions, and is probably genetically controlled. These species are intimately related to the two southern biomes of South America, characterized by open and/or drier vegetation formations: the Chaco (which is part of the Dry Diagonal) and the Pampa. The species from the T. crassula   group are morphologically very similar due to many overlapping morphological characters, and indumenta type and pattern are the most useful characters for separating these species. For the same reason, all species were recovered within a polytomy in the strict consensus (Fig. 3 View Figure 3 ). In addition, T. cerinthoides   and T. crassula   (the two lowland species) possess a rather wide distribution range which overlaps with the narrowly distributed T. seubertiana   and T. valida   (both of them restricted to high elevation sites). Much vegetative variation is recorded for the two widely distributed species, but reproductive characters are key in differentiating species in this group ( Pellegrini et al. 2017). Thus, I suggest the T. crassula   group to be targeted for phylogeographic and reproductive studies to improve and deepen the understanding of taxonomic boundaries between these taxa. 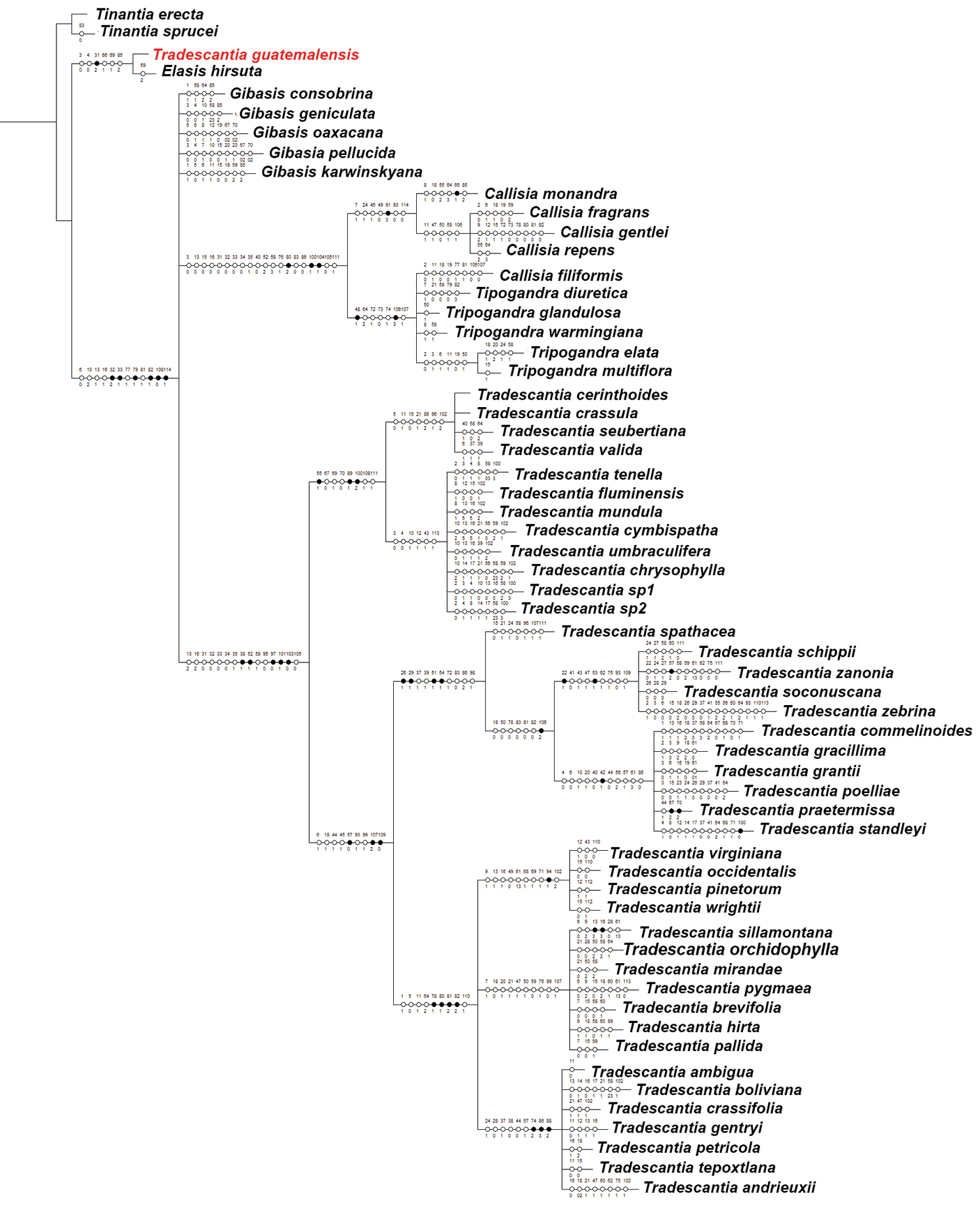 Figure 3. Strict consensus tree (length = 516 steps; CI = 0.3411; RI = 0.8039), showing the character state optimizations at each node of the cladogram, represented by circles. In each circle, the numbers above and below represent the character and character state numbers, respectively (as presented in Suppl. material 1). Tradescantia guatemalensis C. B. Clarke ex Donn. Sm. is depicted in red, to highlight its placement as sister to Elasis hirsuta (Kunth) D. R. Hunt. 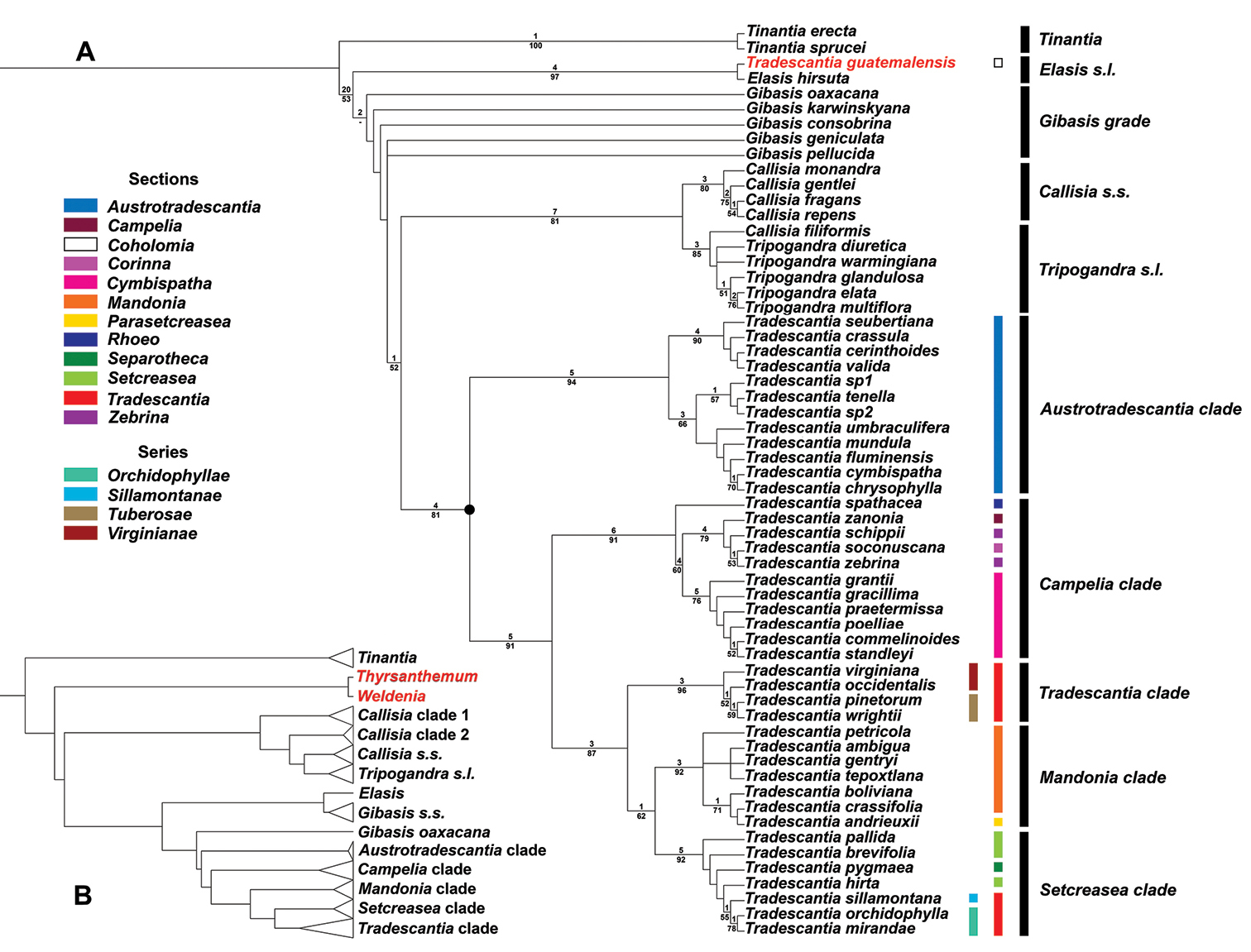 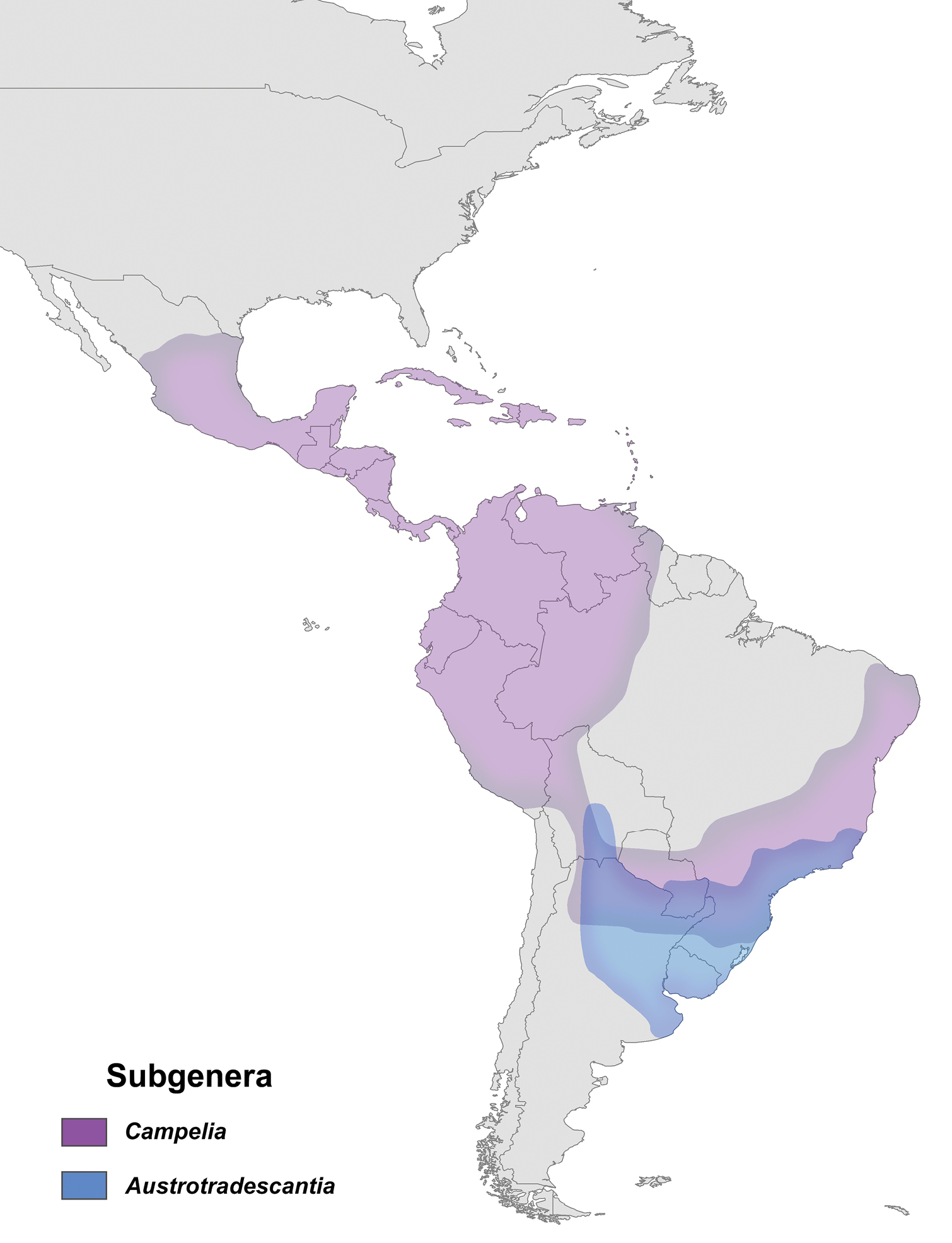 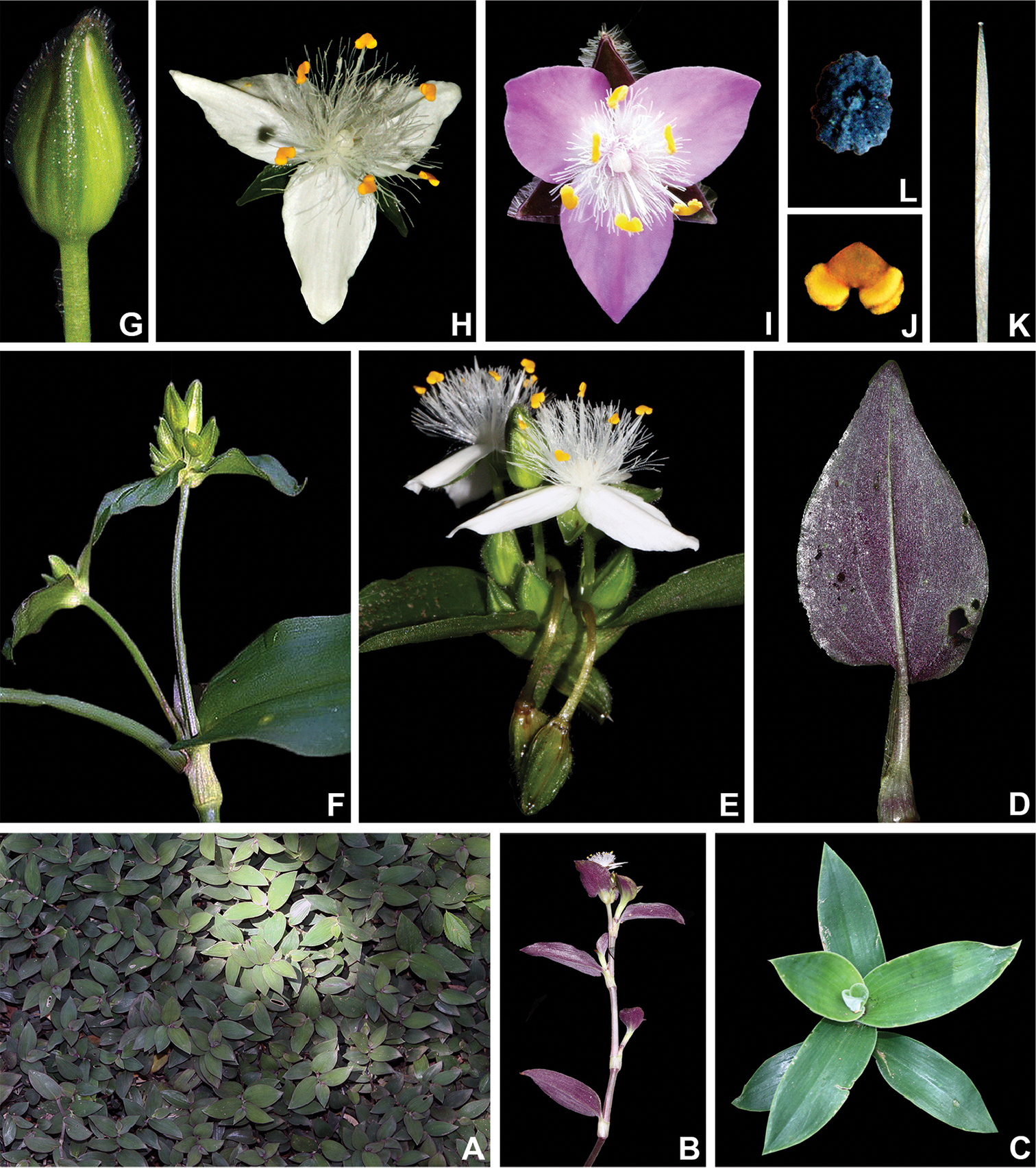