Monophorus  is often associated with species showing an intense red coloration in the anterior body (e.g., Bouchet & Guillemot 1978: fig. 3). Agreeing with Rolán & Fernández-Garcés (1994), who studied specimens from Cuba, M. olivaceus  differs from other congeneric species by not having a red coloration, although the roof of the mantle cavity can present such feature in some cases ( Fig. 14CView Fig). The lack of a vivid red pigmentation may be merely associated with feeding on sponges different from the usual ones for the genus, possibly not having any major phylogenetic significance, or this coloration severely vanishes soon after the storage in ethanol (see remarks on N. verbernei (Moolenbeek & Faber, 1989))  , in this case pending further photographs of live specimens.

The operculum of M. olivaceus  is herein illustrated for the first time ( Fig. 14View Fig E–F). The simple morphology of the operculum is similar to that described for the genus (e.g., Marshall 1983; Fernandes & Rolán 1988; Romani 2015), although with an expanded last whorl owing to a proportionally larger shell and aperture of M. olivaceus  compared to congeneric species.

The single radular preparation of M. olivaceus  from Cuba ( Rolán & Fernández-Garcés 1994) masked some important features of this species. For example, these authors found only teeth with five cusps and a total number of 33 teeth per row, instead of teeth with two to seven cusps and up to 43 teeth per row in the present study. This highlights the importance of illustrating more than one radula per species when dealing with triphorids, especially in cases of abnormal local bilateral asymmetry ( Marshall 1983), which is the case of M. olivaceus  . As understood from Marshall (1983), the abnormal local bilateral asymmetry occurs when any significant discrepancy is observed between the two sides (left or right of central tooth) of the same radula, e.g., in tooth shape, number of cusps or relative cusp size. This process was firstly observed for the western Pacific species M. angasi (Crosse & P. Fischer, 1865) in Marshall (1983)  .

The most similar radula to M. olivaceus  is that of the eastern Atlantic population of M. erythrosoma ( Bouchet & Guillemot, 1978)  , with undifferentiated teeth bearing three to six cusps ( Bouchet & Guillemot 1978). The Mediterranean population of M. erythrosoma  has a remarkably different radula ( Bouchet 1985) than the eastern Atlantic population, with differentiated tooth morphology (especially the central tooth) and more marginal teeth, demanding investigation of intraspecific variation vs the existence of cryptic but distinct species. Another case is that of M. perversus  , which presents two radular types in the same Mediterranean population, probably reflecting a considerable intraspecific variation. They are distinguished by the morphology of central, lateral and M1 teeth, and one type ( Bouchet 1985: figs 5, 7) is somewhat similar to M. olivaceus  . 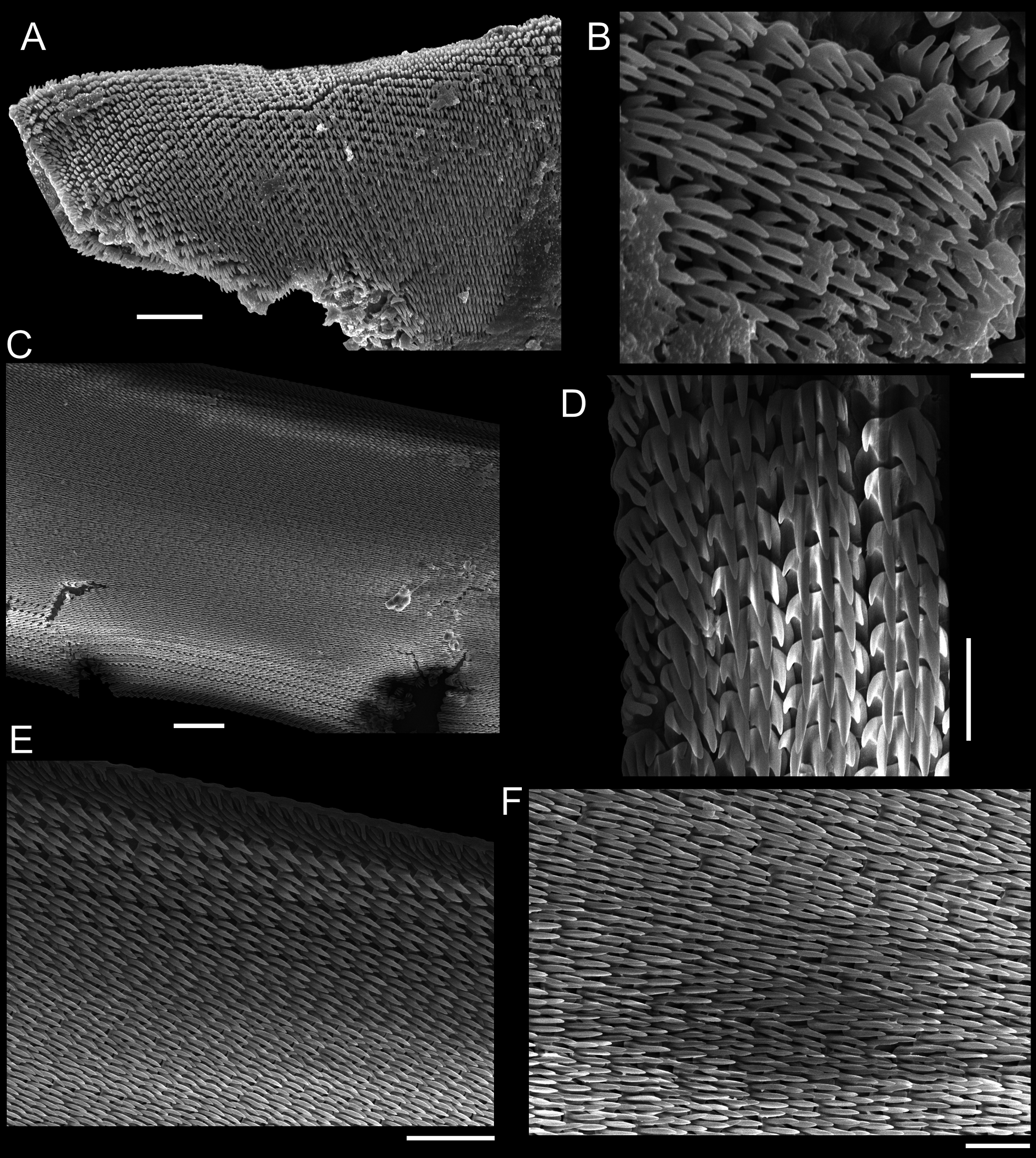