Etymology:— The specific epithet is dedicated to Mireile São Geraldo dos Santos Souza, an orchid collector, resident of Diamantina (MG) , and former Dean and retired Professor at the Federal University of Vales do Jequitinhonha and Mucuri (UFVJM).

Distribution and habitat:— Cattleya mireileiana is only known from a population of approximately 150 individuals in Alto da Jacuba, in the municipality of Diamantina , in Minas Gerais State ( Fig. 2 View FIGURE 2 ). It was found growing in shrubby vegetation on rocks with some accumulations of organic material ( Fig. 1a View FIGURE 1 ). We therefore assume that this species is endemic to this region and that additional fieldwork efforts will be needed to could locate additional populations.

Conservation status:— Due to incomplete information on its distribution, we have assigned the new species to the category data deficient (DD), according to IUCN criteria (2012).

Taxonomic considerations: — Cattleya mireileiana it is similar to C. bradei (Pabst 1973: 332) Van den Berg (2008: 5) , C. briegeri (Blumensch. ex Pabst 1973: 367) Van den Berg (2008: 5) , and C. cruziana ( Castro & Menezes 2015: 29) Van den Berg (2019: 3) both in the vegetative aspect and in the yellow color of its flowers (see comparison in Table 1 View TABLE 1 ). However, it is separated from both congeners by the tricolor carina of the lip, reddish violet at the base, then white to the point of insertion of the middle lobe (vs. no white extension in C. bradei , C. briegeri , and C. cruziana ) and yellow from this point to the end. Other outstanding features in C. mireileiana are the yellow petals and sepals that become consistently whitish in an extension that goes from approximately the middle of these floral parts to the base (vs. absent in C. bradei , C. briegeri , and C. cruziana ).

Furthermore, C. mireileiana presents a whitish area on the lip disk, which can be well observed when it is distended. It covers an area corresponding to a semicircle with a center at the base of the distended lip and a radius corresponding to half the length of the lateral lobe. In this aspect, it can be easily separated from C. bradei and C. briegeri , where the white colored lips do not occur, and C. cruziana where some individuals may sporadically present a much smaller whitish area, with radius of at most one fourth of the length of the respective middle lobe ( Fig. 3 View FIGURE 3 ).

In addition to the morphochromatic observations cited above, C. mireileiana features parapatric speciation in relation to C. bradei , C. briegeri , and C. cruziana , which grow in the same macro region, but not in the same rocky outcrops, and occur within an ecological context that substantially differs from that of C. bradei , as it grows in low vegetation that can protect it and provides decomposing plant material. Cattleya mireileiana never occurs on the exposed and bare rocks consistently associated with C. bradei (a notably rupicolous species). Its ecological niche is more similar to that of C. cruziana , which also shows a certain preference for areas with organic matter availability. Another characteristic linked to the ecology of the new species is its preference for areas very close to depressions in the rocks where water can accumulate in puddles during the rainy season, or run in small, semi-permanent rivulets— indicating a greater tolerance for wet or humid environments. 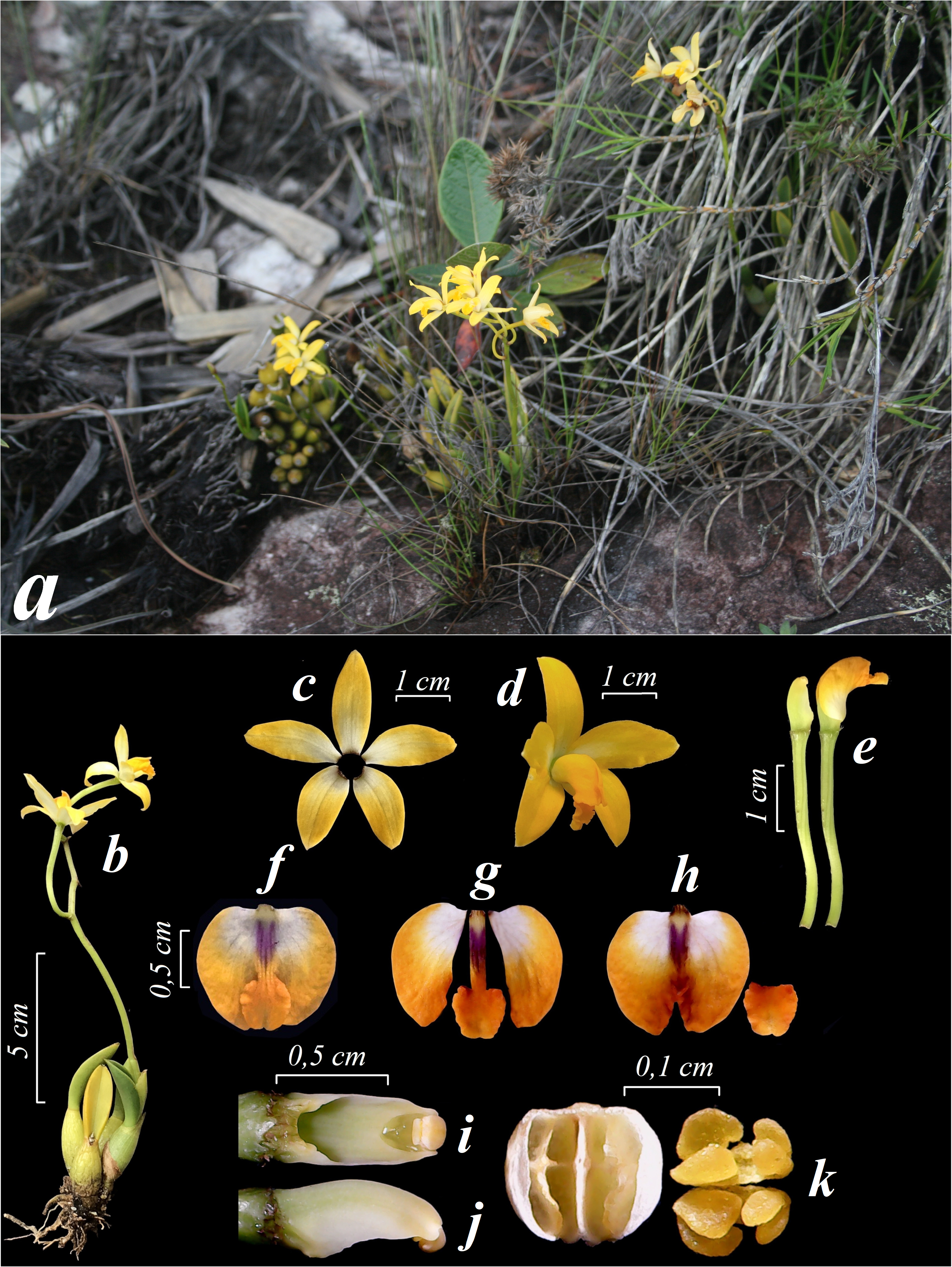 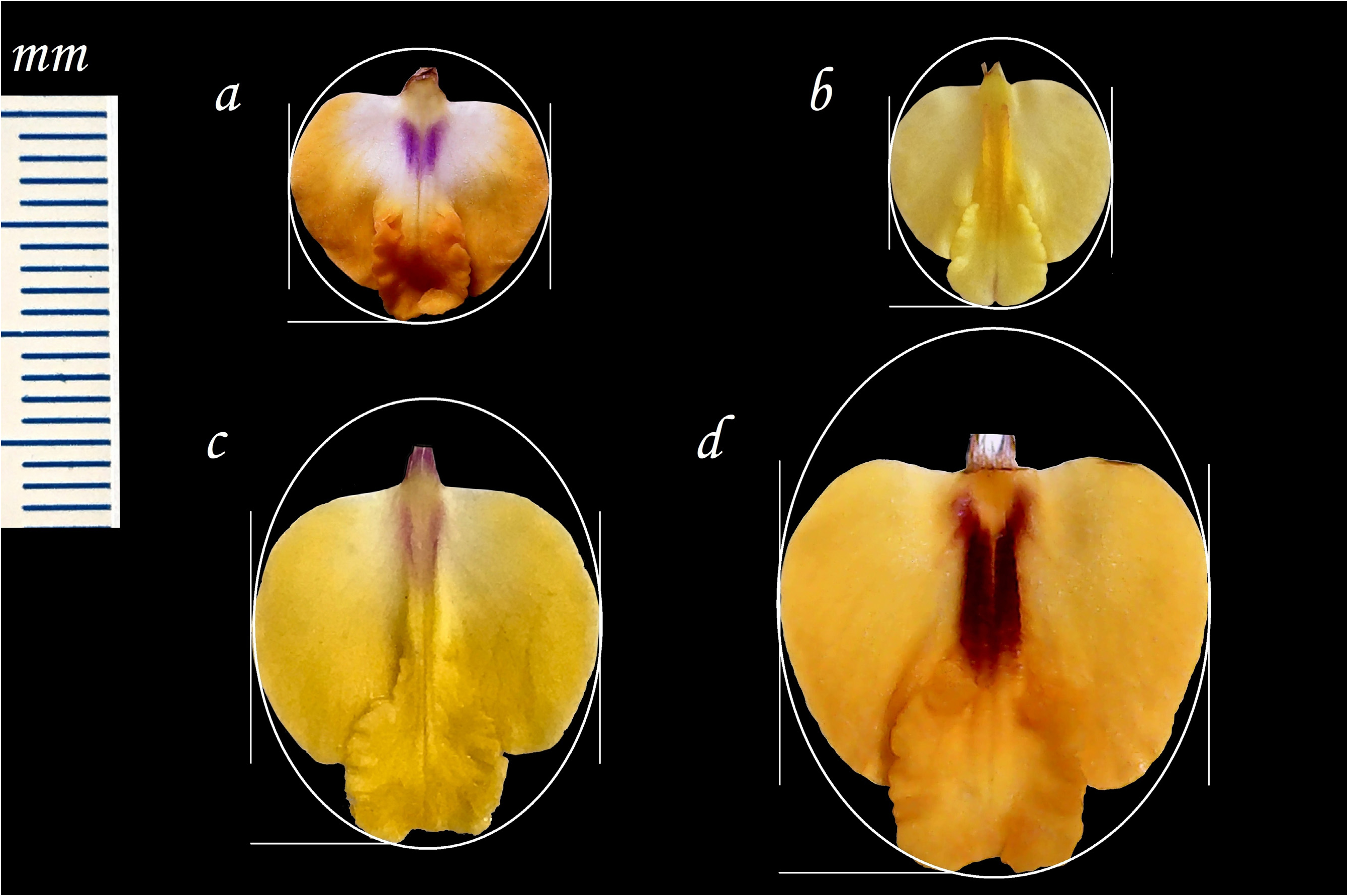