We analysed few specimens from Estación Biologica de los Llanos, Guarico, Venezuela, that we associated to Monodelphis species   ‘A’ of Pine & Handley (2008) ( Fig. 1 View Figure 1 ) or to M. orinoci   of Ventura et al. (1998) (see Introduction). Our sample includes four skins (three young specimens and one young adult female), one adult male in fluid, and two juvenile skulls (one male and one female).

These specimens exhibit fur colour clearly paler than M. palliolata   and M. brevicaudata   . The adult female at hand (USNM 443774) is smaller than adult females of M. palliolata   and M. brevicaudata   , and has clearly shorter and less dense fur. The middorsal stripe is very pale, and as in M. palliolata   and M. glirina   , occupies the entire crown of the head between the eyes. The dorsum is light grey, and the laterals are faded orange. The adult male at hand (USNM 490240), in fluid, has the pelage longer than the female and the juveniles herein examined. The laterals on this specimen are yellow, and the middorsal stripe is dark buff to light brown, instead of greyish. Like in the adult female, the mid-dorsal stripe occupies the entire crown of the head between the eyes, and is much lighter than in M. glirina   and in M. palliolata   . In the adult male and female, the ventral fur is much lighter than in other species, almost self-coloured (pure cream). In the male, body fur extends more onto the tail than in the female, corresponding to less than one third of caudal length. The ears of the adult male (fluid specimen) show the antihelix almost indistinct, notably less developed than in M. brevicaudata   (USNM 490232, 490235, 490247) and in M. palliolata   (USNM 448751, 490238), the latter of which exhibits the larger antihelix. Comparisons of the skulls of the two young specimens (USNM 443780, 443776) with those of M. palliolata   of corresponding sex and age class (USNM 517250, 385003) showed that M. species ‘A’ has a smaller skull, with smaller upper incisors and tooth row. In addition, the rostrum seems slightly shorter and broader.

Compared with the adult male specimen at hand, the type of M. orinoci ( Thomas, 1899)   (BM 98.12.1.22, an early adult male specimen from Caicara, south and east of the Orinoco river, which we include as a representative of M. brevicaudata   ) shows the middorsal stripe darker, grizzled grey instead of buff to light brown, the laterals much more ferruginous instead of yellowish, and the ventral hairs with greybased hairs much more evident.

Therefore, our results support the assumptions that M. species ‘A’ is a valid species that is morphologically distinct from other species distributed in adjacent areas, namely M. palliolata   and M. brevicaudata   , and that the name M. orinoci Thomas   is not applicable to it. As our sample is too limited in terms of adult specimens (no skulls of adult specimens were examined), we are not able to provide a formal description of this species at the present time. 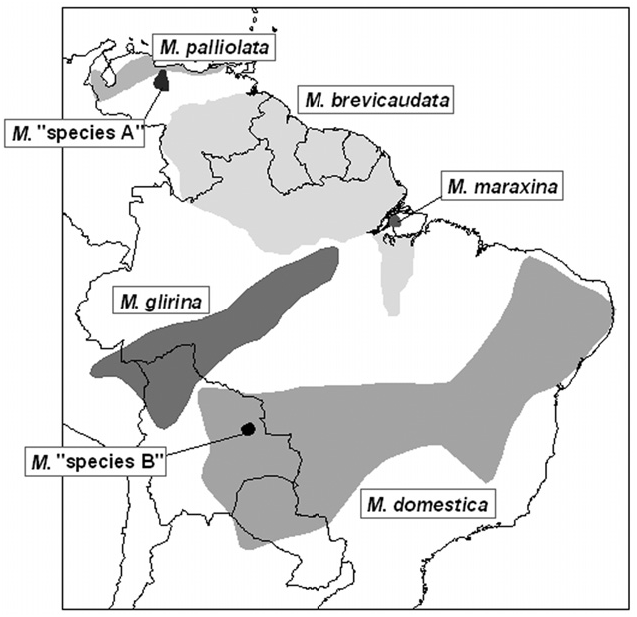 Figure 1. Species of the Monodelphis brevicaudata complex according to Solari (2010). Geographical distributions were modified from Pine & Handley (2008).