Dorsal and lateral pelage: Dorsal body pelage grizzled, with grey mid-dorsum contrasting with reddish flanks, therefore forming a well-defined stripe from the ears to the base of the tail ( Fig. 4 View Figure 4 ), becoming red-washed on the rump, mainly in older specimens. Cover hairs of mid-dorsal fur c. 8 mm long at shoulders, grey basally (light brown at the base, darker toward the middle) and whitish distally (white band c. 1 mm), turning dark brown or black at the tip. Guard hairs sparser, longer (c. 10 mm), slightly coarser than cover hairs, entirely dark brown or black. At head, mid-dorsal stripe narrow and light coloured, commonly light grey to whitish buff, illdefined, confined mid-dorsally by a band of red hairs above each eye, giving a general reddish aspect to the head. Some specimens show the band of red fur above each eye wider, and the stripe is reduced to a line. Lateral fur bright red coloured, with hairs greyish brown basally, gradually turning darker to the middle and reddish distally. Next to the ears the red portion of the hairs becomes proportionally longer, resulting in a fur almost entirely or entirely reddish.

Ventral pelage: Ventral fur greyish basally and yellowish cream distally, clearly distinct from the lateral fur in colour ( Fig. 4 View Figure 4 ). Ventral hairs c. 4 mm long, whitish at the base, becoming brownish toward the middle, and yellowish cream distally. Some hairs entirely cream or entirely grey are also present. Hairs become gradually shorter and red-washed from the chest toward the chin. Some specimens exhibit reddish tipped hairs next to the base of the tail, showing the inguinal region reddish coloured.

Vibrissae: Mystacial and genal vibrissae blackish, except for a few shorter ones that are light coloured in the two series. The longest mystacial vibrissae generally extend beyond eyes when laid flat against cheek, but do not reach the base of pinnae. The genal vibrissae generally reach pinnae and frequently do not extend beyond its posterior border. There is one pair of supraorbital vibrissae, blackish and unequal in size. There are few (up to five) submental and inter-ramal vibrissae, which vary from whitish to light brown coloured. Vibrissae are also present on the dorsal surface of forearm close to the elbow (one or two sparse hairs), and on the ventral surface of forearm close to the manus (one to three hairs); both vibrissae arrays have hairs turned to the sides, unequal in size, varying from whitish to brownish, frequently darker basally and lighter toward the tips. Limbs: Dorsal pelage of legs and arms coloured as the lateral body pelage; ventral pelage of legs and arms coloured as the ventral body pelage. Hands and feet brownish grey in general aspect. Hairs on metacarpals and metatarsal generally brown basally and yellowish to orange distally, but some are entirely brown, yellowish or orange. Digits dorsally covered with short brownish hairs. Ungual tufts brownish to goldenbrown, sparse and short, reaching approximately the middle of the claws on hands and almost the tips of the claws on feet. Hands and feet with digit III slightly longer than digits II and IV, the latter two subequal in size. Digits I and V shorter than digits II- IV. On feet, digit V reaches about two thirds of digit IV’s length, and the hallux reaches about the base of digit II. Plantar surface hairless, covered with five enlarged convex tubercles: the thenar pad and four interdigital pads; the former is the longest, and the latter are proportionally wider, of which the fourth interdigital pad is commonly the longest.

Tail: Tail short, a little longer than one half of the head and body’s length. Body fur covers the dorsal surface of the tail to about one third of caudal length. This coverage fur is reddish coloured, and gradually becomes sparser and shorter toward the tail tip. The uncovered part of the tail is weakly bicoloured (brownish dorsally and lighter brown ventrally). Tail scales are small, brownish, and rectangular in shape, each one bearing three hairs, the central one generally darker and slighter thicker.

Rostrum: Rostrum gently concave in dorsal view at premolars line, especially at P2. Infraorbital foramen enlarged. Nasals narrow and parallel anteriorly, becoming gradually wider posteriorly until reaches the greatest width at the frontal/maxillary suture, and then gradually narrowing toward the posterior end; the shape of the posterior end is generally round. Premaxillary extends anteriorly slightly beyond the first upper incisor (I1), not forming a distinct rostral process.

Orbital region: Lacrimal foramen consists of two openings located at the anterior edge of orbits, externally to the orbital cavity. A third smaller, anteriorly directed foramen is located in the orbital process of the lacrimal. This latter opening may be absent on one or both sides. Interorbital region moderately constricted, hourglass shaped. Supraorbital crests absent, with crown elements and orbital elements connected in a smooth curvature. Zygomatic arches robust, slightly convergent anteriorly, more expanded to laterals on males than in females, and commonly more expanded in older specimens.

Braincase: Sagittal crest evident in males and weak in female. Temporal lines weak in males and indistinguishable in females. Interparietals almost reaching the squamosal laterally (reach in specimen UFMG 3190, left side), hat-shaped, with the medial portion larger, becoming gradually narrower toward laterals. Nuchal crests well defined and developed, with the lateral expansions merging with the enlarged posttympanic processes of the squamosal. Exoccipitals not joined, and dorsal margin of foramen magnum formed by exoccipitals and supra-occipital.

Palate: Incisive foramen short, extending anteriorly until the fourth upper incisor or the posterior line of the third upper incisor, and posteriorly until the upper canine ( Fig. 5 View Figure 5 ). Maxillopalatine fenestra approximately twice as long as the incisive foramen, extending from the first upper molars to the third upper molars. Posterolateral palatal foramen relatively large, as long as one half of the incisive foramen length, oval shaped, located immediately behind the fourth molar, with anterior border reaching about the posterior line of M 4 in adult specimens. Maxillary and palatine fenestra absent, but some diminutive perforations are present on the palatine. Palatine inflected ventrally, with approximately straight posterior edge.

Basicranium: Roof of the nasopharyngeal passage not perforated by vacuities. Alisphenoid bone with a distinct infratemporal longitudinal crest, which marks the ventral limit of the attachment of the temporalis muscle (see Wible, 2003). Bulla usually extending ventrally beyond the occipital condyle. Occipital condyle extending ventrally beyond the small and rounded paroccipital process. Alisphenoid tympanic process moderately inflated, rounded, slighter wider than longer. Ectotympanic about twice as long as wider. Anteromedial surface of the tympanic process of the alisphenoid pointed or rounded, with no bony strut or lamina connecting it with the transverse canal foramen. Promontorium well developed, with an elongated rostral tympanic process of the petrosal.

Teeth: First upper incisor styliform, hypsodont, separated from I2–I5 by a short diastema. I2-I5 subequal in size, but with crowns showing a tendency to become wider from I2 to I5. Upper canines large and robust, at least twice as high as first upper premolar (P1) in females and young adult males, and at least three times higher than P1 (commonly more) in adult male specimens. P1 about one half the size of P2, separated from the latter by a very small gap, absent in the specimen MPEG 38054. P2 and P3 subequal in size, but P3 slightly higher than P2, and P2 proportionally wider, with posterior cutting edges more developed than in P3. Upper molars large, increasing in breadth from M1 to M4, all of them with well-developed anterior cingulum. Lower incisors similar in size, spoonshaped, with lingual cusp present. Commonly, there is a small gap between p1 and p2. Second and third lower premolars subequal in height, with p2 commonly slightly taller (specimen UFMG 3190, however, show p3 clearly taller than p2), but p2 wider and with posterior cutting edges more developed than p3.

The name is given in honour of Arlindo Pinto de Souza Júnior (1958–2009), in recognition of his whole life dedication to preparing mammals for the mammal collection of Museu Paraense Emílio Goeldi, including several specimens examined in this study.

The central clade constitutes a genetic lineage clearly independent from any other found in the M. brevicaudata complex. As there is no available name for this lineage, we describe it here as a new species. Morphologically, specimens included in this taxon are distinguishable from all other species of the M. brevicaudata complex, except for some specimens of M. touan (see the Morphological comparisons section below). 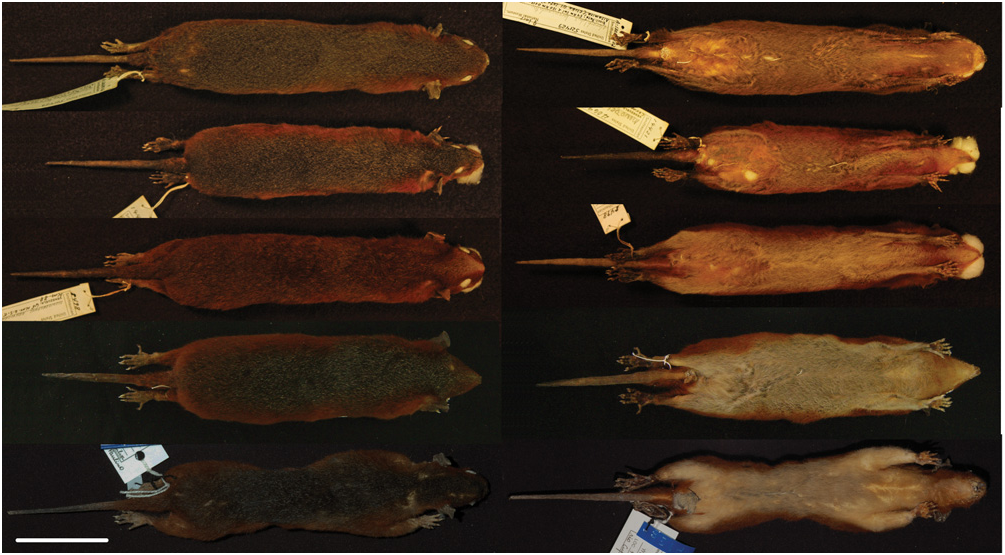 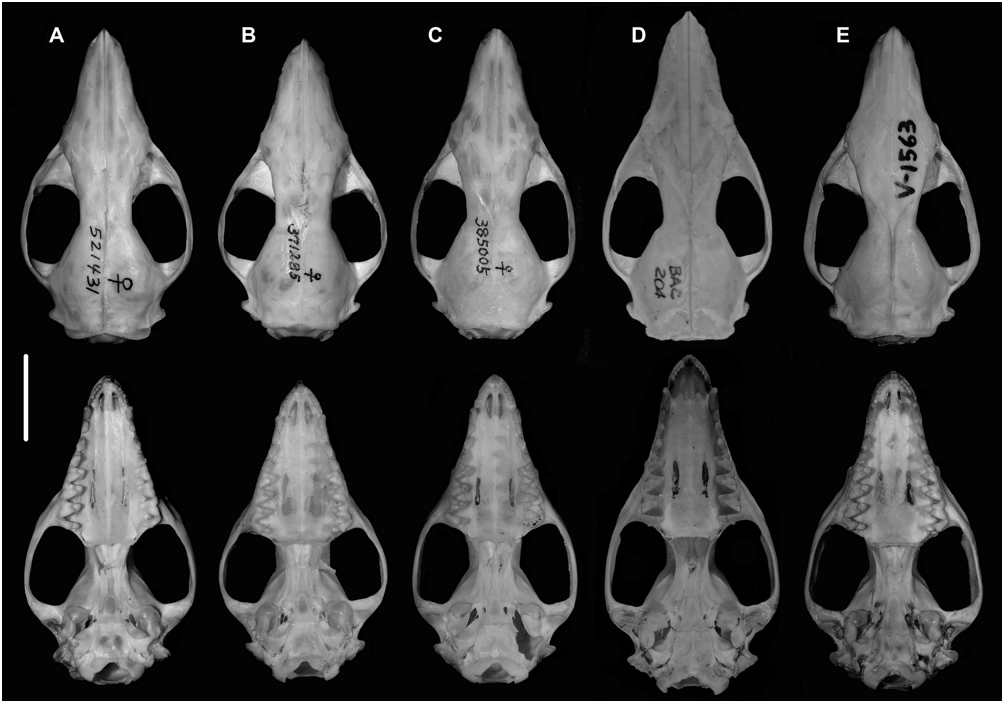 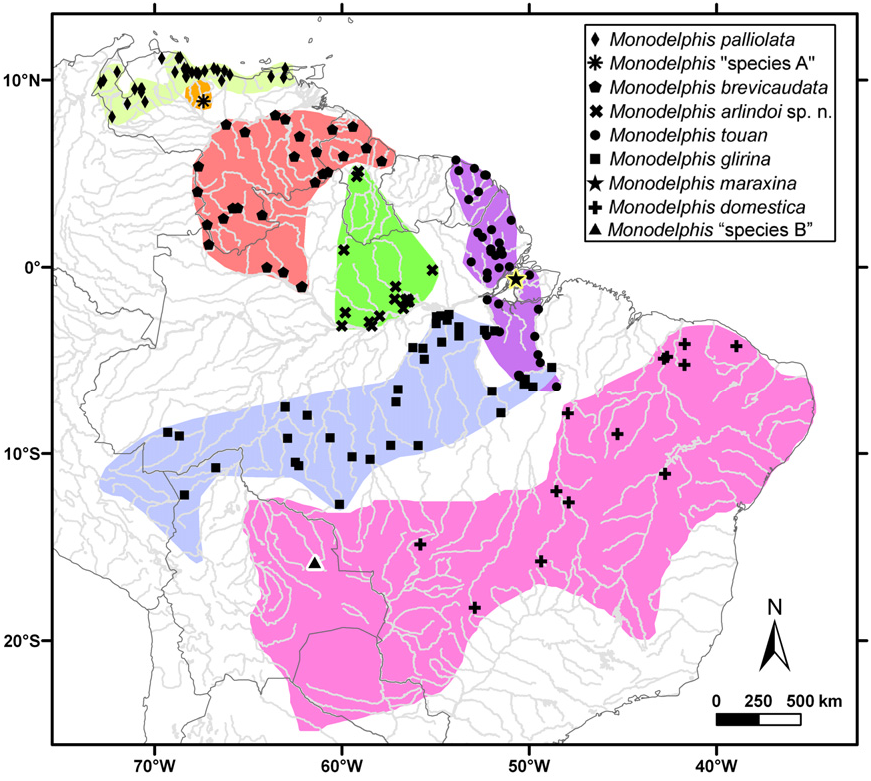 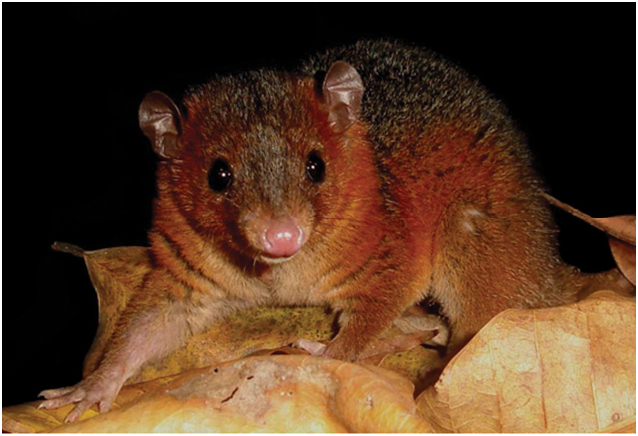