Geographical distribution: Restricted to northern Guyana, Venezuela south of the Orinoco river (in the states of Bolívar and Amazonas), and north-western Brazil (north of the Negro river and west of the Branco river, in the states of Amazonas and Roraima) ( Fig. 6 View Figure 6 ). No other species of the M. brevicaudata   complex were found in sympatry with M. brevicaudata   (sensu stricto).

Remarks: Monodelphis brevicaudata   was originally described as [ Didelphis   ] brevicaudata Erxleben 1777   . In the same year, Schreber (1777) described Didelphis brachyuros   . Both descriptions were based on the description and illustration of Muris sylvestris Americani faemina from Seba (1734). Thomas (1888) gave priority to Erxleben’s name, considering D. brachyuros   to be a junior synonym. The specimen from Seba ( BM 67.4.12.540) exhibits pelage ‘distinctly bicolored, reddish dorsally and abruptly paler ventrally’, as quoted by Voss et al. (2001) who analysed the type specimen’s skin and confirmed the association of Erxleben’s and Schreber’s names to it. Synonymizing S. surinamensis Zimmermann, 1780   and D. sebae Gray, 1827   with M. brevicaudata   is justified because the former two names were also created based on Seba’s specimen/illustration, being objective synonymies of M. brevicaudata   . The descriptions of D. hunteri Waterhouse, 1841   and P. b. dorsalis Allen, 1904 were based on specimens that fit our definition of M. brevicaudata   , and are therefore junior synonymies of the latter. The type of P. b. orinoci Thomas, 1899   does not exactly fit our morphological definition of M. brevicaudata   , because it has mid-dorsal stripe more grizzled (broader at head), flanks paler, and smaller size than any specimen recognized by us as M. brevicaudata   . However, because we do not understand all morphological variation within M. brevicaudata   yet, and there is considerable variation with regard to the mid-dorsal stripe and size in this species (see Geographical variation section above), we consider M. orinoci   as a junior synonym of M. brevicaudata   .

Didelphis brevicaudata Erxleben, 1777   is the oldest available name for specimens of the north-western clade ( Fig. 3 View Figure 3 ). The restriction of the name M. brevicaudata   herein proposed is supported by the morphological similarity between the specimen ROM 98909 View Materials (placed in our north-western clade) and the type specimen of M. brevicaudata   (BM 67.4.12.540), both exhibiting homogeneously reddish dorsal fur without a mid-dorsal stripe (‘bicolored pattern’ of Voss et al., 2001). Additionally, our genetic samples from Venezuela and northern Guyana, which include localities close to the type locality of M. brevicaudata   (Kartabo, northern Guyana), grouped together and formed a monophyletic lineage in the molecular analyses ( Fig. 2 View Figure 2 ) with considerable genetic divergence from any other lineage (Supporting Information Table S1). It is important to note that this clade includes both bicoloured ( ROM 98909 View Materials ) and tricoloured specimens (L-1917, L-1920, USNM 568009), showing that the colour of the dorsal pelage is a variable feature of this species (see Geographical variation section above). 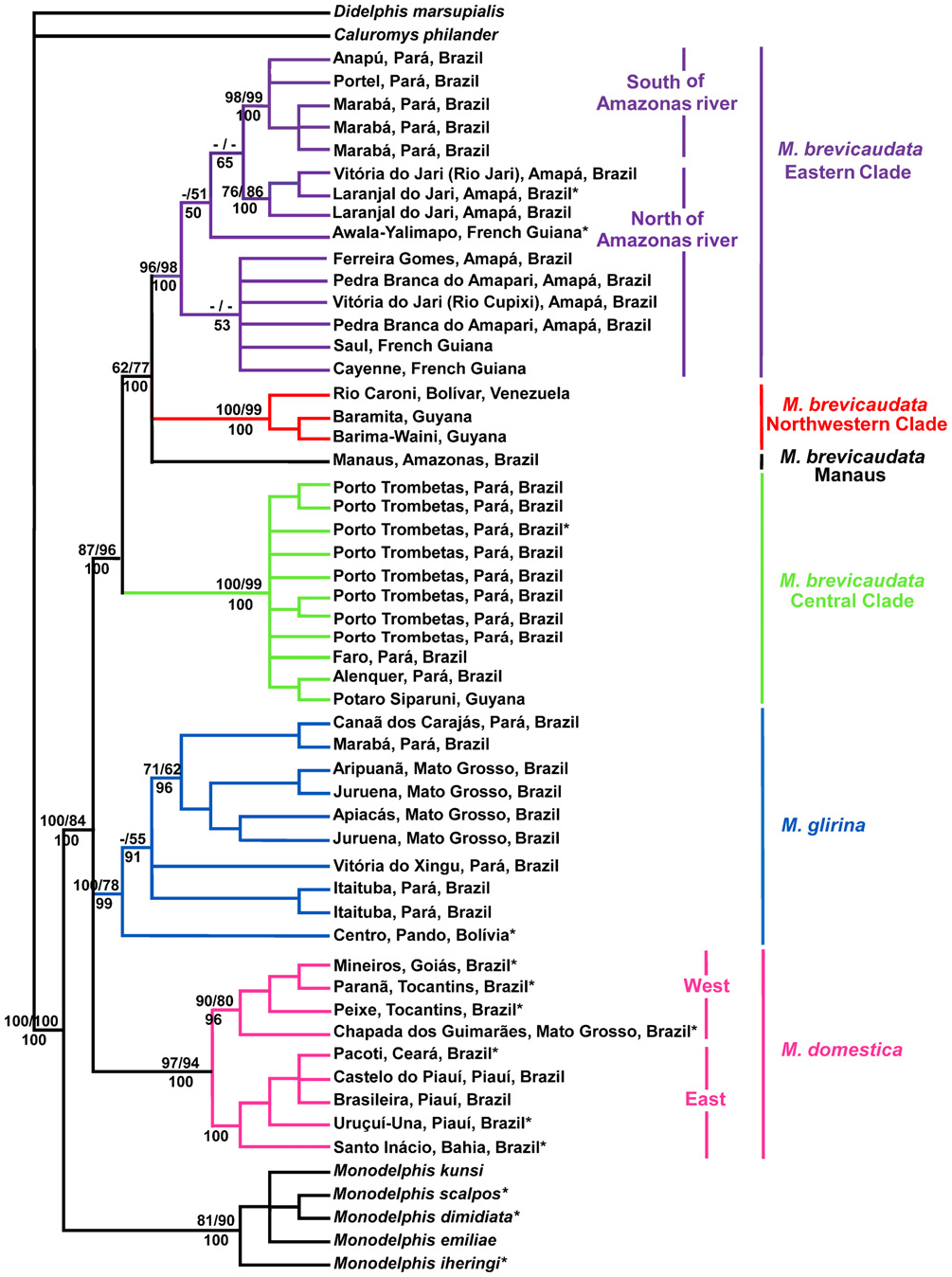 Figure 2. Phylogenetic relationships of species of the Monodelphis brevicaudata complex represented by the Bayesian tree resulting from the analysis of the combined matrices of 471 base pairs of the mitochondrial cytochrome b gene and 402 base pairs of the mitochondrial 16S rDNA gene. Numbers above branches represent parsimony followed by maximum-likelihood bootstrap; numbers below branches correspond to Bayesian posterior probabilities (‘-’ means a value lower than 50%). Asterisks refer to specimens/localities not examined morphologically. Figure 3. Collecting localities of specimens included in molecular analyses, and corresponding clade structure found in the molecular phylogeny, with taxon names associated with them (tree to the right).