Discussion. Since the review of Penny (1982 b), P. hagenella   was the only species in the genus reported as occurring in Colombia. On the basis of pigmentation characters and external morphology, the specimens examined herein were compared with the description of Penny. Observations on high resolution images of the type labels of Mantispa hagenella Westwood   deposited in the Oxford University Museum, clearly shows that the specimen was examined by Robert Beard in 1968 as it is evident from his annotations ( Fig. 8 View FIGURE 8 b, d). The annotation of Beard indicates that P. melitomae Linsley & MacSwain   is a junior synonym of P. hagenella   . However, Penny adds that during the analysis of specimens of both species, he has found differences in the number of apical spines of the gonocoxites (four and three, respectively) therefore he does not considered them as synonyms.

Penny (1982 b) based his redescription of P. hagenella   on the type specimens. In the illustrations of the male genitalia of this species, it is possible to appreciate that the pseudopenis is short and recurved, a character used to separate it from other species whose pseudopenis is extremely long and coiled ( Penny 1982 b, Figures 16‒19 View FIGURE 16 View FIGURE 17 View FIGURE 18 View FIGURE 19 ). Additionally, Penny indicates that this species is the only one in the melitomae   group which usually presents three apical spines in the gonocoxites. Herein, the gonocoxite morphology of several examined specimens corresponds with the description of P. melitomae ( Linsley & MacSwain 1955)   , as well as with the illustration of the male genitalia of Parker & Stange (1965). Those specimens possessing gonocoxites with three digitiform processes, were easily related with the descriptions of Penny (1982 b), however, regarding internal genital structures, an elongated, coiled pseudopenis was observed, discarding all of the species treated by Penny, because none of them have both characters simultaneously. Moreover, Linsley & MacSwain (1955) do not illustrate or describe the internal genitalia of P. melitomae   males, making it difficult to assign the specimens studied herein with any of those species.

Moreover, regarding the body pigmentation and morphology, it is known that most species in the melitomae   group present similarity in body color pattern, great variation in size, wing venation, ovipositor shape and number of antennal flagellomeres. Penny & da Costa (1983) suggest that the females of most species of Plega   show resemblance with those of P. yucatanae Parker & Stange   and P. hagenella   leading to difficulties with species identification. In the males of P. yucatanae   , there are also slight variations in the genitalia, with either two or occasionally three digitiform processes on the gonocoxites ( Parker & Stange 1965). In contrast, the Nearctic species, P. dactylota Rehn   , shows a wide variation in coloration pattern of the head and thorax, morphology of the gonarcus medial lobe and number of apical spines in the gonocoxites ( Rice 1987).

In the series of examined specimens, two of them presented three digitiform processes in one of the gonocoxites and four in the other. Some small specimens showed only three digitiform processes in both, as described by Penny (1982 b). Other male genital structures exhibit very similar morphology in all specimens studied, highlighting the strongly coiled pseudopenis, similar to P. beardi Penny.

After observing photographs of the prepared abdomen of the type of Mantispa hagenella   , it was possible to clarify this problem. The images show what at first view seems to be a recurved pseudopenis, as described by Penny ( Fig. 8 View FIGURE 8 e). Comparing other genital structures, such as ectoproct, ninth sternite, gonocoxites, gonarcal median lobe and pseudopenis base, all have great similarity with the specimens studied here. With a more detailed magnification of the photographs, we can see that the pseudopenis of the type specimen is fragmented and located towards the anterior abdominal region, causing difficulty to diagnose this species and creating confusion for a long time ( Fig. 8 View FIGURE 8 e, f).

In conclusion, it seems that male genital structures are very variable, ninth gonocoxites may have three or four apical processes. In addition, current treatments are not accurate enough to ensure reliable species delimitation due to misinterpretation of the pseudopenis morphology of the type specimen.

Remarks. In Colombia this species has been collected near water sources on vegetation or rocks between 19 h00 to 20 h00. Some specimens were found camouflaged on the surface of large rocks, mostly covered with lichens and mosses, where they hunted small dipterans. Cited from Magdalena by Penny (1982 b), herein P. hagenella   is recorded in Antioquia, Chocó, Cundinamarca, Meta, Santander and Tolima for the first time, as probably being the most common and widely distributed symphrasine in Colombia. Their altitudial distribution is comprised between 10‒1600 m.

Hook et al. (2010) reported the association of P. hagenella   with the immature stages of Hylaeus (Hylaeopsis)   sp. in Tripoxilon manni   nests. Recently Maia-Silva et al. (2013) studied the relationship between this mantispid and the eusocial bee Melipona subnitida   in the semi-arid region of northeastern Brazil, providing important information on the biology of this subfamily. In addition, the authors indicated that this species could become a solitary-bee predator, with occasional associations with social bees or vice versa. Larvae of P. hagenella   are developed inside of closed cells of the stingless bee colonies, feeding on the hemolynph of the meliponine larvae or pupae. Pharate adults of the mantispid, probably have a chemical camouflage or a chemical profile similar to that of their prey, allowing them to escape from the nest without harm. 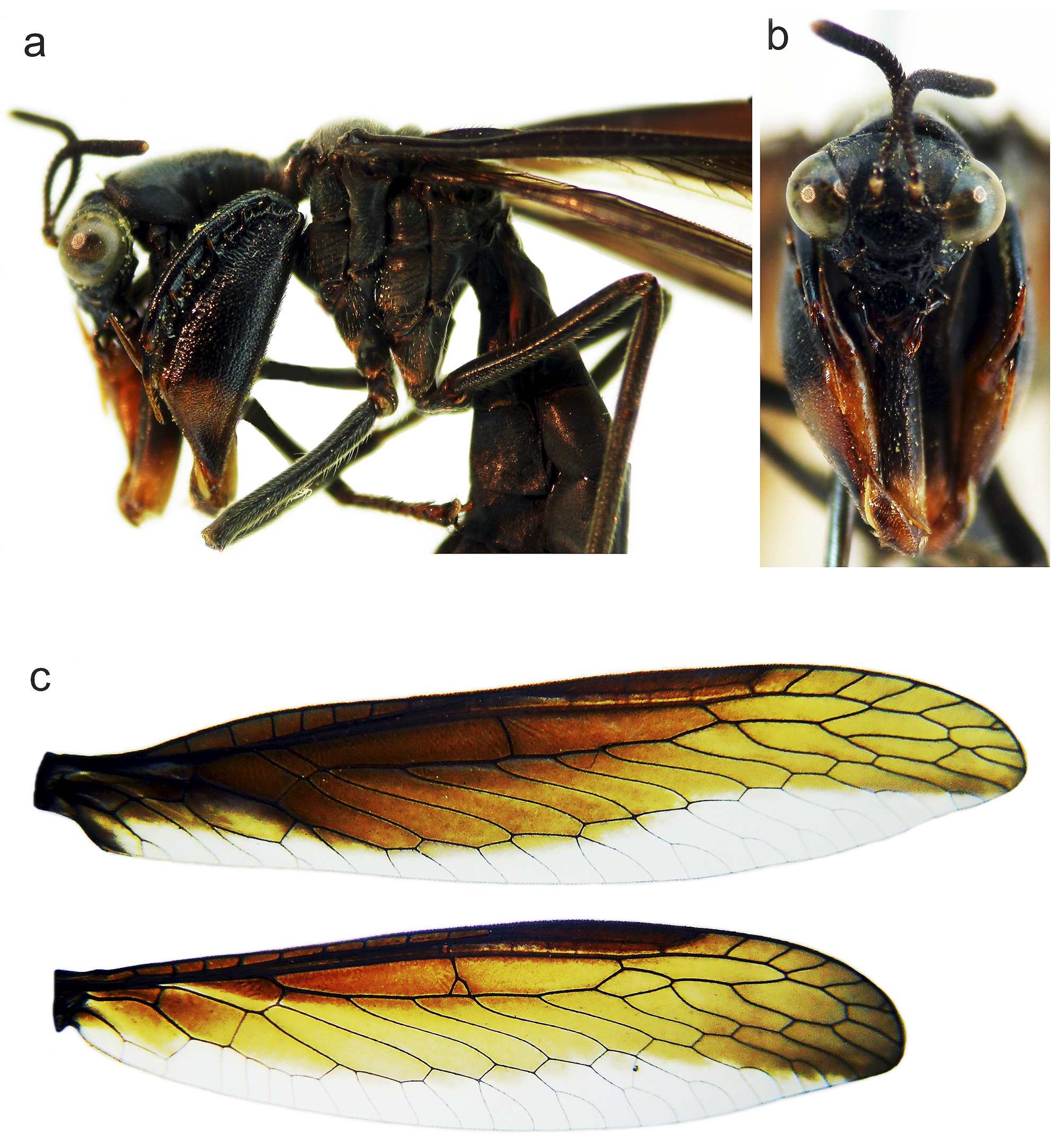