Diagnosis. (male). Total length: 14.0 mm. Similar to P. protentor  but differs from this species as well as other species of Polauchenia  by the petiole of petiole being 1.5 times as long as fore lobe.

Vestiture: head, first antennal segment, thorax, coxae, trochanters, femora and tibiae covered with very numerous and long thin setae, and with a short and very dense pubescence formed by thin, curved setae. The setae are pale, yellowish to golden-yellowish to pale-brownish and in general they are paler or darker, similar to the coloration of the integument in which they are inserted. In some exceptions mentioned below, groupings of whitish adpressed setae form whitish markings on areas with brownish integument. Head: mostly covered by a pubescence formed by adpressed short thin setae, which are formed by somewhat longer setae on postocular region and gula. The setae covering the pair of short postocular tubercles are whitish, contrasting with their integument, which is brownish; on midline of posterior half of postocular region, the setae are somewhat more numerous and paler. Glabrous areas on head: transverse sulcus, a declivous area immediately anterior to it and a pair of submedian slightly divergent very thin stripes running from midportion of transverse sulcus to a point somewhat at midpoint between transverse sulcus and medial margin of antenniferous tubercles. Antenna: segment I covered with short adpressed curved thin setae and long thin scattered somewhat curved setae ( Figs. 92–94View FIGURES 91 – 98); basal portion of antennal segment II with setae of intermediate length between the adpressed setae of the pubescence and the longer setae that are present on segment I ( Fig. 94View FIGURES 91 – 98); segments II –IV covered with short, adpressed, straight or somewhat curved, thin setae ( Figs. 95–98View FIGURES 91 – 98); a few (five) very much thinner isolated elements (interpreted as trichobothria) on segment II, four of them in its basal portion and one in its middle third. Labium: segment II (first visible) with scattered moderately short adpressed setae; segment III and IV almost glabrous with scattered straight erect and some adpressed short setae, somewhat more numerous on dorsal region. Thorax: besides the short dense pubescence and long thin setae, there are several even longer setae on distal half of pronotum, meso and metasternum ( Figs. 89–90View FIGURES 88 – 90). A glabrous shining curved stripe running just below the curved pale stripe on fore lobe, but beginning somewhat far from lateral margin. Meso and metapleura with a midlateral somewhat large stripe formed by whitish pubescence, which does not reach anterior margin of either of them. Mesosternum with a midlongitudinal somewhat large stripe formed by whitish pubescence, which reaches the basal portion of metasternum. Laterally, on distal half of mesosternum and between coxa on metasternum, somewhat large stripes formed by whitish pubescence. Spines of scutellum and metanotum with numerous moderately short, thin setae. Forewing with a few scattered short thin setae at basal portion and a few scattered somewhat longer ones along costal vein. Hind wings glabrous. Legs generally covered by dense short adpressed pubescence and several long thin setae. Mid and hind coxae with a pair of glabrous linear areas, which do not reach apex ventrally; hind coxae with an additional and somewhat larger glabrous area laterally. Fore femur: posteroventral series beginning at the base of the article and ending far from apex ( Fig. 99View FIGURES 99 – 105), composed of about thirteen large and medium-sized spiniferous processes, the most basal of which with its apex slightly inclined toward apex of article ( Fig. 99View FIGURES 99 – 105); among these large processes, approximately eighty small spiniferous processes; towards apical portion of fore femur, the large and then the small processes become somewhat smaller and absent at approximately distal fifth. Lengths of larger processes combined with apical spines about or somewhat more than four-fifths of diameter of segment. Anteroventral series beginning somewhat apically of posteroventral series ( Fig. 99View FIGURES 99 – 105), not interrupted at base, composed of nine spiniferous tubercles, on which around sixty sharp small spines are present. A sparse series of very long and strong setae accompanies the posteroventral series ( Fig. 99View FIGURES 99 – 105); these setae reach the apex of the femur, where they are somewhat shorter. Fore tibiae with numerous stiff setae on subapical dorsal depression ( Fig. 100View FIGURES 99 – 105); ventral surface with numerous small spines, among which, with exception of the basal fifth of the article, about twenty larger spiniferous processes, subequal in size, most of which with lighter base and darkened spiny distal portion; at both sides of ventral surface, beside these processes, series of long and strong setae ( Fig. 100View FIGURES 99 – 105); on apical extremity, a cluster of stiff somewhat curved golden setae ventrally ( Fig. 101View FIGURES 99 – 105). Tarsi covered with moderately long setae ( Fig. 101View FIGURES 99 – 105). Abdomen: covered with dense adpressed pubescence and more scattered thin long setae, which are more curved too.

Etymology. The name of the new species was given in reference to its general similarity to P. protentor  . Noun in apposition, ending not to be changed.

Habitat and natural history. The single specimen of P. paraprotentor  sp. nov. was found in a small cave of horizontal extent 14.5 m that is associated with the “canga” formation (ferruginous superficial breccia). It is located in a forested area (mainly composed by metallophilic savanna). The cave comprises a shelter with low environmental stability and no aphotic areas. The cave is generally dry and has no active drip points during the dry season, although it becomes quite drenched in the wet season, with several drip points and percolation areas. The single specimen was found in the cave ceiling, near the entrance. This was probably an accidental finding, since no other specimens were found in any of the almost 100 caves that were inventoried in the area (these were sampled twice, in both dry and the rainy season). Accordingly, this species is probably distributed in the forest, and specimens may possibly enter caves, accidentally or maybe while searching for prey near the entrances.

Nevertheless, at least three characteristics of Polauchenia  as described by Wygodzinsky (1966) were not recorded in P. paraprotentor  sp. nov. Firstly, while that author mentioned that both series of processes of fore femora are often accompanied by strong elongated setae, in the new species these setae were only shown to be present beside to posteroventral series ( Fig. 99View FIGURES 99 – 105). However, judging by Wygodzinsky’s (1966: fig. 90I) illustration of the base of the fore femur of the male of P. protentor  , this species only presents elongated strong setae accompanying the posteroventral setae. Therefore, it can be assumed that the presence of elongated strong setae near the processes of the anteroventral series is a variable characteristic among the species of Polauchenia  .

Nevertheless, it seems that before to the present study, among the species of Polauchenia  , the hind wing had only been examined in P. protentor  . With the exception of Wygodzinsky’s (1966: fig. 90D) illustration of a portion of the wing of this species, there is no other description or figure of the hind wing in any other species of this genus ( McAtee & Malloch 1925, Wygodzinsky 1950, 1966; Maldonado 1968). Thus, it is necessary to examine the hind wing in other species of Polauchenia  to record these characteristics among them, in order to ascertain whether they are of generic or specific significance.

Most of the features of the male genitalia of P. paraprotentor  sp. nov. are also very similar to those of the other species of Polauchenia  , as summarized by Wygodzinsky (1966), with the exception of the large process of endosoma described here in the new species ( Figs. 111View FIGURES 106 – 111, 117View FIGURES 112 – 117). Wygodzinsky (1966) did not describe any process of endosoma in Polauchenia  spp. He only mentioned that the endosoma was of somewhat complex structure and that it had not been examined in a fully evaginated state. It is possible that any process in the endosoma in the specimens that he examined had remained unnoticed or unrecorded by him. Therefore, only future examination of additional specimens will allow better conclusions or comparisons regarding the processes of endosoma among species of Polauchenia  .

Among the other species of Polauchenia  , the species that most closely resembles P. paraprotentor  sp. nov. seems to be P. protentor  .

The latter species was described based on a female from Panama ( McAtee & Malloch 1925). Wygodzinsky (1966) examined a male identified by these authors, also from Panama, and provided some illustrations of it. Forero (2006) recorded the species from Colombia.

The first three characteristics were confirmed from photos on specimens of P. protentor  from Colombia provided by Dr D. Forero. The specimens formed the basis of his record of this species from the country ( Forero 2006).

With the new species described here, six species are now included in Polauchenia  , three of them recorded only from Brazil. 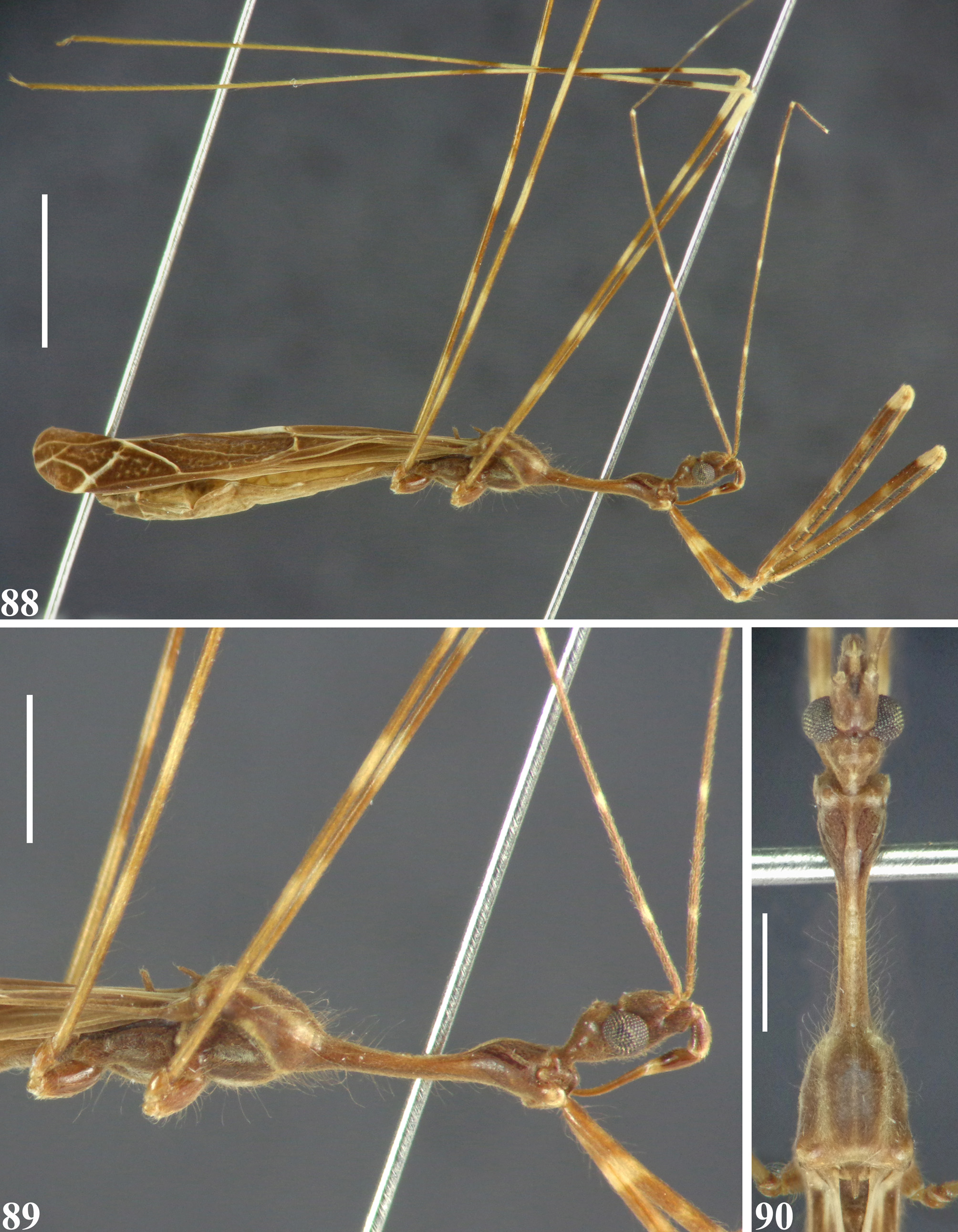 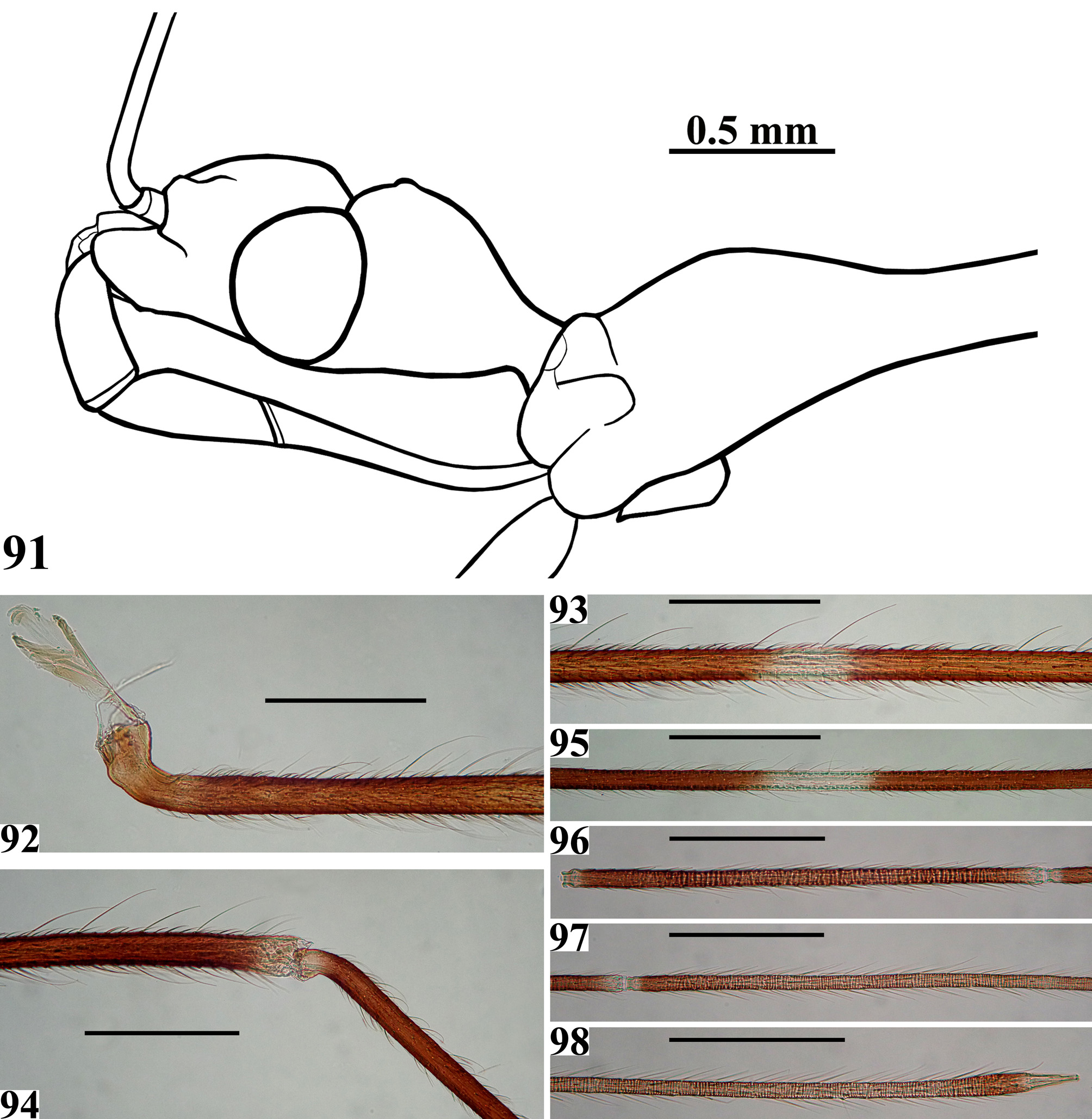 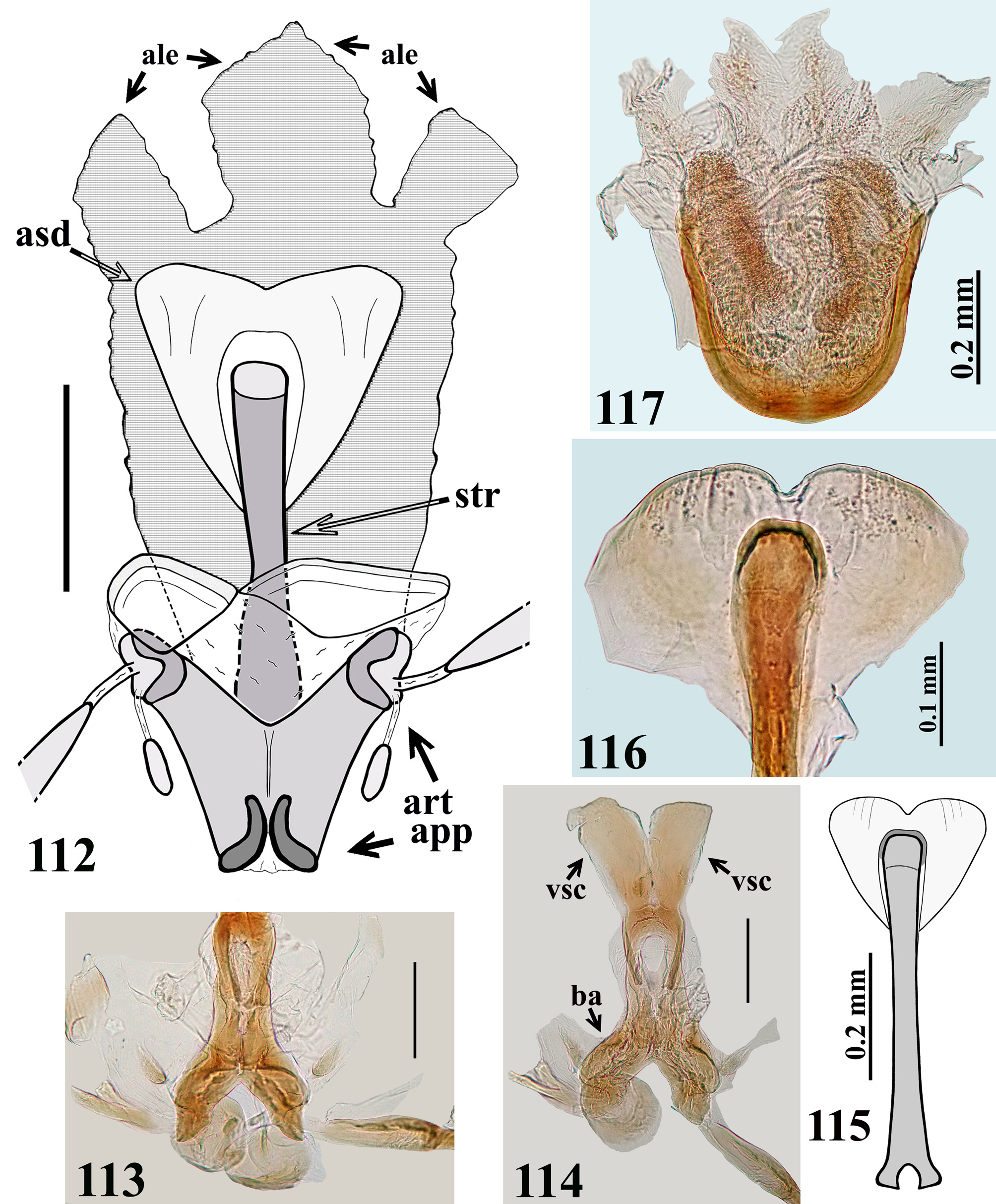