Description. The following morphological details are in addition to those given for the genus and previously given for the species. Fore and hind leg setae as in Figs (3G, H); male pygofer phragma with pair of variable sclerotized rods (dorsal connective) from Xth segment to aedeagus ( Fig. 2C View FIGURE 2 ); aedeagus with shaft membranous except for sclerotized oblique ventral margin and with pair of elongate processes appearing to enclose shaft basally and articulating with connnective ( Figs 2 View FIGURE 2 K−M). Female with pregenital sternite 3 times wider than long medially, posterior margin slightly sinuate, posterolateral angles slightly extended and rounded.

Distribution. Soractellus nigrominutus   has an unusually wide distribution extending from the Pacific ( Australia), mainland Asia and West to the Southern Palaearctic and to North and Central Africa ( Fig. 4 View FIGURE 4 ). Recorded habitats are grassland ( Fig. 5 View FIGURE 5 ). In addition to previous records, the current work has examined specimens from Thailand, Nigeria, Kenya, Uganda, Senegal, Ethiopia, and Saudi Arabia.A similar very wide distribution may be found in only a few other leafhopper species ( Deltocephalinae   ) which, with the exception of Dryadomorpha pallida Kirkaldy   (see Webb, 1981: 52), are mainly small grass feeding species, (like S. nigrominutus   ) e.g., species of the Cosmopolitan genus Balcultha Kirkaldy (see Webb & Vilbaste, 1994: 58), which could be transported in flight by wind ( Ghauri, 1983).

Remarks. The unique type S. nigrominutus   was collected by Edgar Riek from Moorooka Australia in November 1944. Other topotypic specimens, also collected by Riek in the same year, were deposited in the BMNH and some others in the Evans collection (pers. com. Murray Fletcher). Examination of the holotype by Murray Fletcher has confirmed that its genitalia match the images presented here in all respects. In addition, examination of topotypic specimens in the BMNH indicates that Evans’s original male genitalia figure is misleading in that the valve is more triangular and the lateral lobe of the style is poorly visible. Also, we have found that the shape of the apical process of the style appears to vary in shape depending on the angle of view (compare figs 2G−J) and in Evans figure ( Fig. 2E View FIGURE 2 ) it is shown as its narrowest width. Therefore, the above features were erroneously used to distinguish the two subsequently described new species S. jianfengensis   and S. lalianensis   , in their original descriptions. Two other features used to distinguish S. jianfengensis   were its macropterous forewings and paler colour but we have found forms varying in colour and wing length from throughout the range of S. nigrominutus   (see Fig.1 View FIGURE 1 for some variation). Based on the above findings we consider it justified to treat all examined specimens as representing a single variable species ( S. nigrominutus   ) and place S. jianfengensis   and S. lalianensis   as junior synonyms of S. nigrominutus   . The possibility that the other species of Soractellus   , S. brunneus   , is the same species was also considered. However, this species differs in several respects. It is much larger, has a conspicuous dark patch on the vertex each side of the midline (absent in S. nigrominutus   ), its styles are almost as long as the subgenital plates (much shorter in S. nigrominutus   ), its connective has a short stem (stem absent in S. nigrominutus   ) and its aedeagal base is more rounded in ventral view; all features shown sufficiently in Evans’s original figures and corroborated by examination of the holotype by Murray Fletcher (pers. com.).

The current work has also revealed the true shape of the aedeagal shaft in S. nigrominutus   (not previously shown), which is membranous ( Figs 2L, M View FIGURE 2 ) and therefore easily overlooked. A similarly shaped aedeagus was also noted in the Afro-oriental paralimnine genera Nicolaus Lindberg, 1958   and Hengchunia Vilbaste, 1969   , by Stiller (1998: 327), indicating a possible close relationship between these genera. Stiller considered the processes in Nicolaus   and Hengchunia   to be ventral preatrial paraphyses, however in S. nigrominutus   the origin of the processes is unclear but appears to be from the shaft rather than preatrium.

Lastly, although there is some slight observed variation in the shape of the pregenital sternite (depending on the curvature of the segment in situ), we cannot account for the significant difference in three female paratypes of S. lalianensis   (as originally figured). These specimens differ from all other type series female paratypes, which match females of S. nigrominutus   (pers. com. H. Naveed). Therefore, the paratype series of S. lalianensis   may be a mixed series of two species. 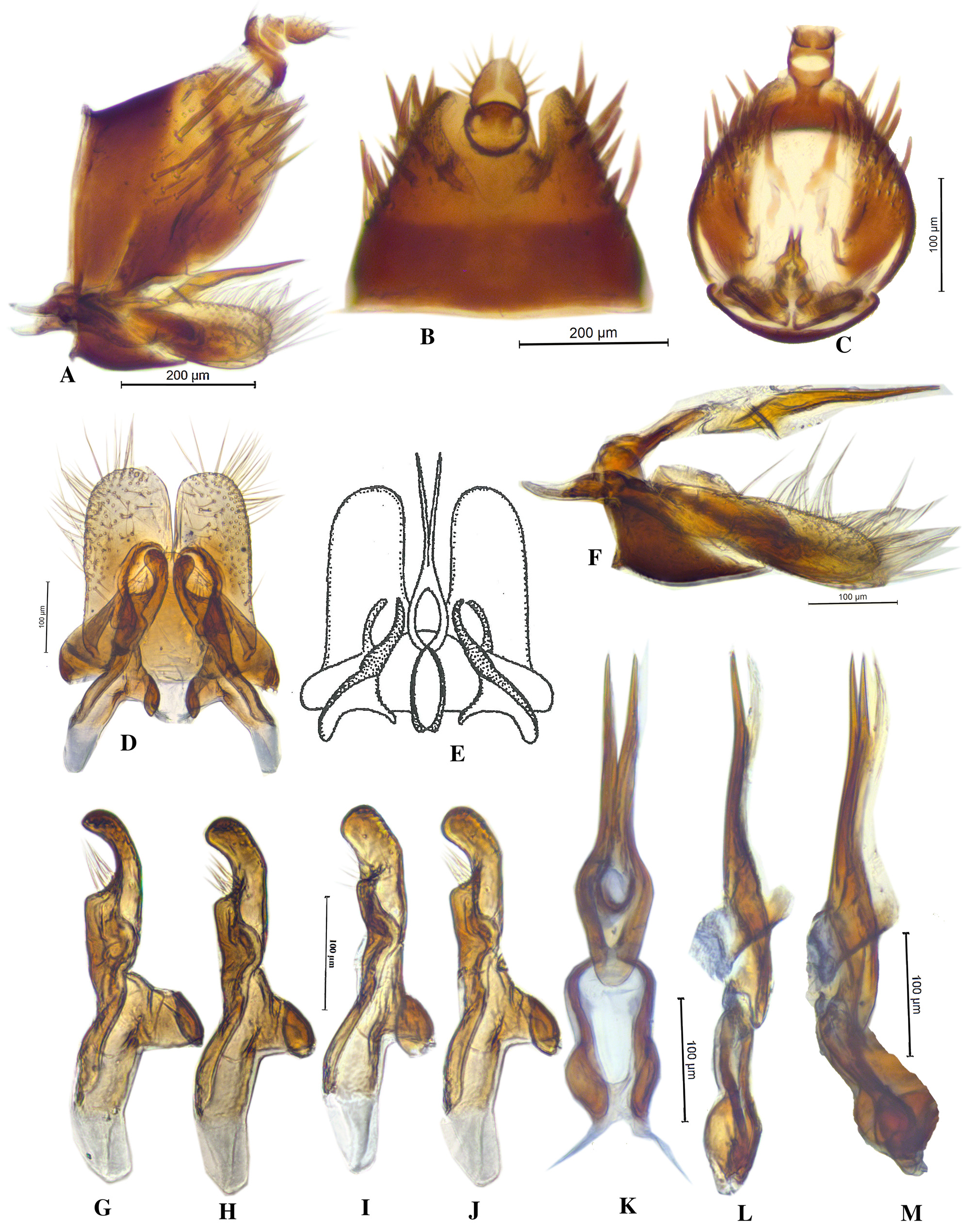