Remarks. This species was originally described by Fourmanoir & Randall (1979) from the 61.8 mm SL holotype collected in 200 m at Gazelle Pass, New Caledonia. In 1986, the first author identified a second, 16.0 mm SL specimen collected in 194 m off Lady Elliot Island, southern Great Barrier Reef (AMS I.26844-001). The Lady Elliot specimen was overlooked in subsequent faunal checklists and accounts on Australian Plectranthias . Aside from differences that can be attributed to its much smaller size, the specimen agrees well with the holotype, including the presence of a tapered bar extending from the middle of the dorsal fin to the anterior anal fin, and a second band on the caudal peduncle ( Figure 40A View FIGURE 40 ).

Randall & Hoese (1995) described P. pallidus from the holotype from off Townsville, Queensland, which they named for its pale preserved coloration and apparent lack of pigmentation. We located a second specimen that closely resembles the P. pallidus holotype and was collected on the same voyage from almost the same locality and depth ( Figure 40B View FIGURE 40 ). Randall & Hoese compared P. pallidus only with P. wheeleri , and not with P. retrofasciatus . Randall (1996) differentiated P. retrofasciatus from subsequent species in his key (including P. pallidus ) on the basis of coloration (presence versus absence of two sharply defined red bars, one on body through notched portion of dorsal fin and the other through caudal peduncle) and lower jaw dentition (inner row teeth about twice as long as those in outer rows versus about same size as outer row teeth).

White et al. (2013) and Peristiwady et al. (2014) recorded P. retrofasciatus from Indonesia on the basis of market specimens from Lombok and northern Sulawesi, respectively. Y.K. Tea (pers. comm.) brought to our attention an additional Indonesian specimen (from Java) that entered the marine aquarium fish trade ( Figure 41A View FIGURE 41 ). There are two specimens in the CSIRO collection, which formed the basis of White et al. ’s record, one of which was photographed when fresh ( Figure 41B View FIGURE 41 ). When examined in Feb 2020, the photographed specimen was very pale, with only a weak indication of the red bars and other markings persisting as scattered fine melanophores ( Figure 41C View FIGURE 41 ). These markings were even less obvious in the other CSIRO specimen. Peristiwady et al. also noted that their specimens were pale following preservation. Suspecting that P. pallidus may be referable to P. retrofasciatus , we re-examined the holotype and non-type specimen from off Townsville. We found that they not only had very faint indication of the mid-body and caudal peduncle bars, but the enlarged inner row teeth in the lower jaw characteristic of P. retrofasciatus . We found no other substantial differences between the specimens, and therefore place P. pallidus in the synonymy of P. retrofasciatus .

Sih et al. (2017) recorded P. kelloggi from the central Great Barrier Reef (ca 18°12′S, 147°15′E and 18°15′S, 147°23′E) based on video footage from baited cameras in 155–179 m, but their observations also appear to be referable to P. retrofasciatus . Based on Randall’s (1980) treatment of P. kelloggi, Sih et al. ’s record of P. kelloggi would indicate the presence of P. melanesius (otherwise P. azumanus – see Remarks for P. melanesius ). However, the fishes in their footage have two red bars on the posterior body, the anterior of which is relatively narrow, slopes posteroventrally and tapers ventrally. This agrees well with the condition found in P. retrofasciatus . In contrast, the anterior bar in P. azumanus and P. melanesius is more or less vertical, and broad throughout its length.

Morphometric data and additional meristic data are summarised in Table 29. 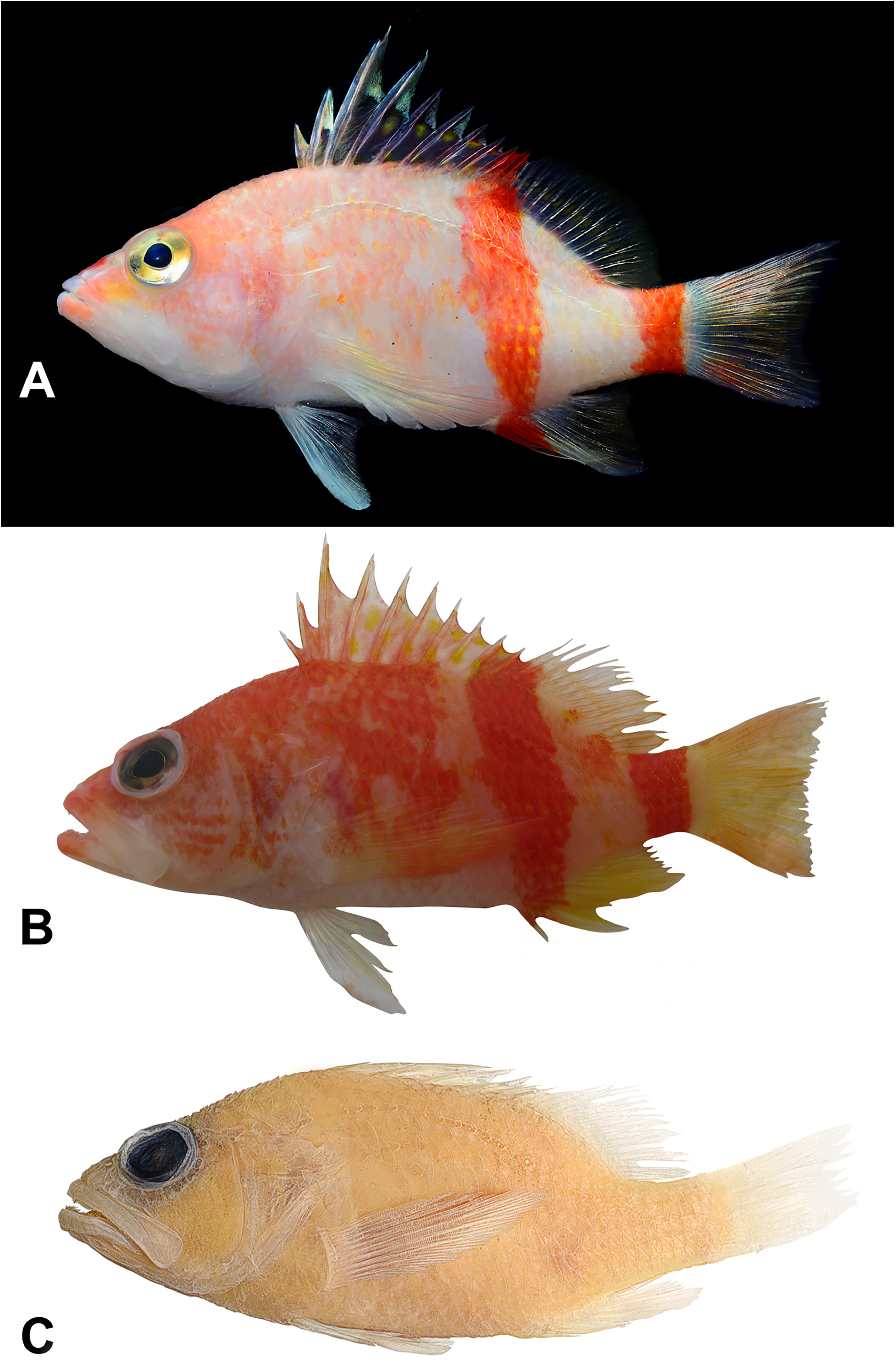