Description. Morphometric and meristic data for the species are provided in Table 1 View TABLE 1 ; Live coloration of the species is presented in Figure 1 View FIGURE 1 . Head blunt; rising at roughly a 45 -degree angle from snout to point vertical with eye, where slope begins to rise only gradually to dorsal origin; small cleft in dorsal profile at occiput. Body flat or with slight rise posteriorly from posterior edge of dorsal fin to origin of adipose fin. Adipose fin thick and leathery; at its highest point its depth nearly equals that of the caudal peduncle. Body profile along adipose-fin base gradually sloping ventrally from adipose-fin origin to caudal-fin base. Caudal fin truncate. Ventral profile flat from snout to vent; from vent to posterior edge of anal-fin profile rises at angle equivalent to downward slope of dorsal surface at the same point on the body; from posterior edge of anal fin to caudal-fin base slope is gradually upward or flat.

Head broad, roughly as wide across as long. Mouth inferior and gape width nearly equal to depth of head at eye. Maxillary barbels extending outward from base as much as half of the head length; ventral view of mouth and snout resembling a hammer or bell due to the posterior flap of tissue connecting maxillary barbel to mouth; snout width about one and one third head length. Eyes reduced, nearly subcutaneous; located anterodorsally on head.

Etymology. The species epithet “ bhutanesnis ” is named in honor of being the first fish species scientifically described from within Bhutan. The common name, Khaling Torrent Catfish, is in reference to the village of Khaling, through which flows the stream where it was discovered.

Distribution. Parachiloglanis bhutanensis   is currently known from Khalingchhu stream and an adjacent, unnamed stream in the headwaters of the Dangmechhu River, in the Brahmaputra drainage ( Fig 2 View FIGURE 2 ).

Ecology. Parachiloglanis bhutanensis   was discovered in a high-velocity, small order stream 2,211 m above sea level ( Fig. 3 View FIGURE 3 ). Relative to their congener in similar streams, they were found in low numbers, with several hours of effort only rendering three specimens. Like P. hodgarti   , they were found adhering to the bottom side of boulders, favoring areas of cascades and white water rather than pools. They were associated with large rocks with deep undercut areas versus rocks with only small refuge from the current. The two streams in which they were found are clear, cold-water environments, sourced from mountain springs, precipitation runoff, and snowmelt, and have little algal growth and frequent high-flow events. This species is adapted to a high-velocity environment with adhesive striations on the leading rays of the paired fins for clinging to rocks and an inferior mouth adapted for scraping algae and invertebrates from the substrate. 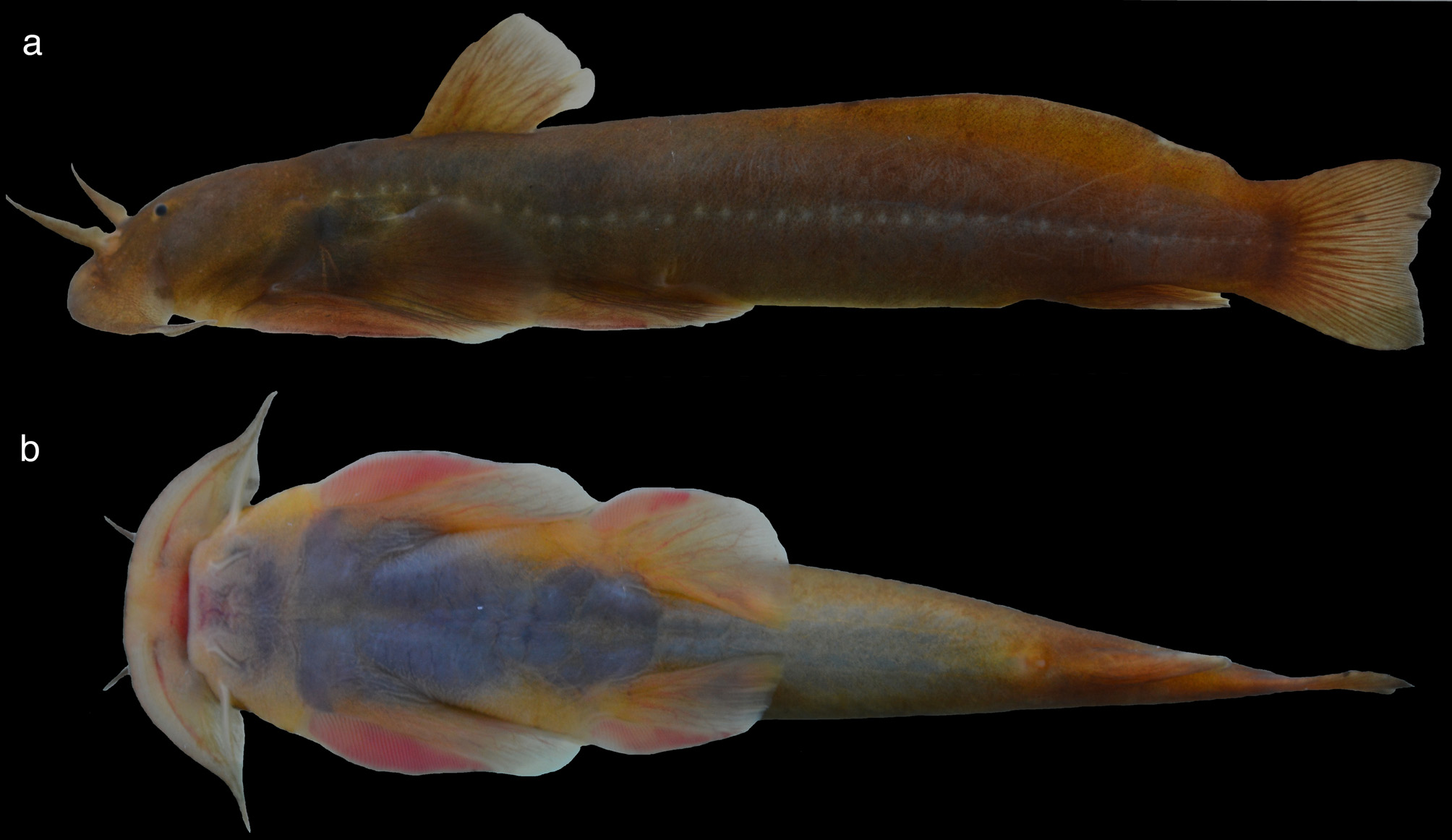