Armbruster, Jonathan W., 2008, The genus Peckoltia with the description of two new species and a reanalysis of the phylogeny of the genera of the Hypostominae (Siluriformes: Loricariidae), Zootaxa 1822 (1), pp. 1-76: 26-29

Keels absent. Mid-ventral plates bent at their midline above pectoral fin to form ridge. Dorsal plates bent dorsally below dorsal fin to form ridges that converge at preadipose plate, dorsal surface flat between ridges. Five rows of plates on caudal peduncle. Abdomen completely covered in small plates except for small areas at bases of pectoral and pelvic fins and occasionally on throat. First anal-fin pterygiophore exposed to form a platelike structure. A pair of lateral plates converging at midline between anus and exposed first anal-fin pterygiophore. 23–28 (mode 26) plates in the median series.

Color: Base tan with brown markings. Head with small spots anteriorly, becoming slightly larger posteriorly and fading between head and dorsal fin or continuing to get larger and fading anywhere before caudal fin. Body with four dorsal saddles (occasionally faint), the first below the middle rays of the dorsal fin, the second below the posterior rays of the dorsal fin and slightly posterior, the third below the adipose fin and slightly anterior, and the fourth at the end of the caudal peduncle. The first two saddles combine midbody. All fins with large spots, spots combining in all except dorsal fin to form bands (although the distal row will occasionally fuse in the dorsal fin). The light interspaces in all fins except the caudal are about half the width of the dark spots or bands. The light interspaces of the caudal fin about same width as dark bands. Dark spot between dorsal-fin spinelet and spine. Abdomen and ventral surface of caudal peduncle lighter than sides. Juveniles colored as adults, but spots significantly larger and fewer bands or spots in the fins. 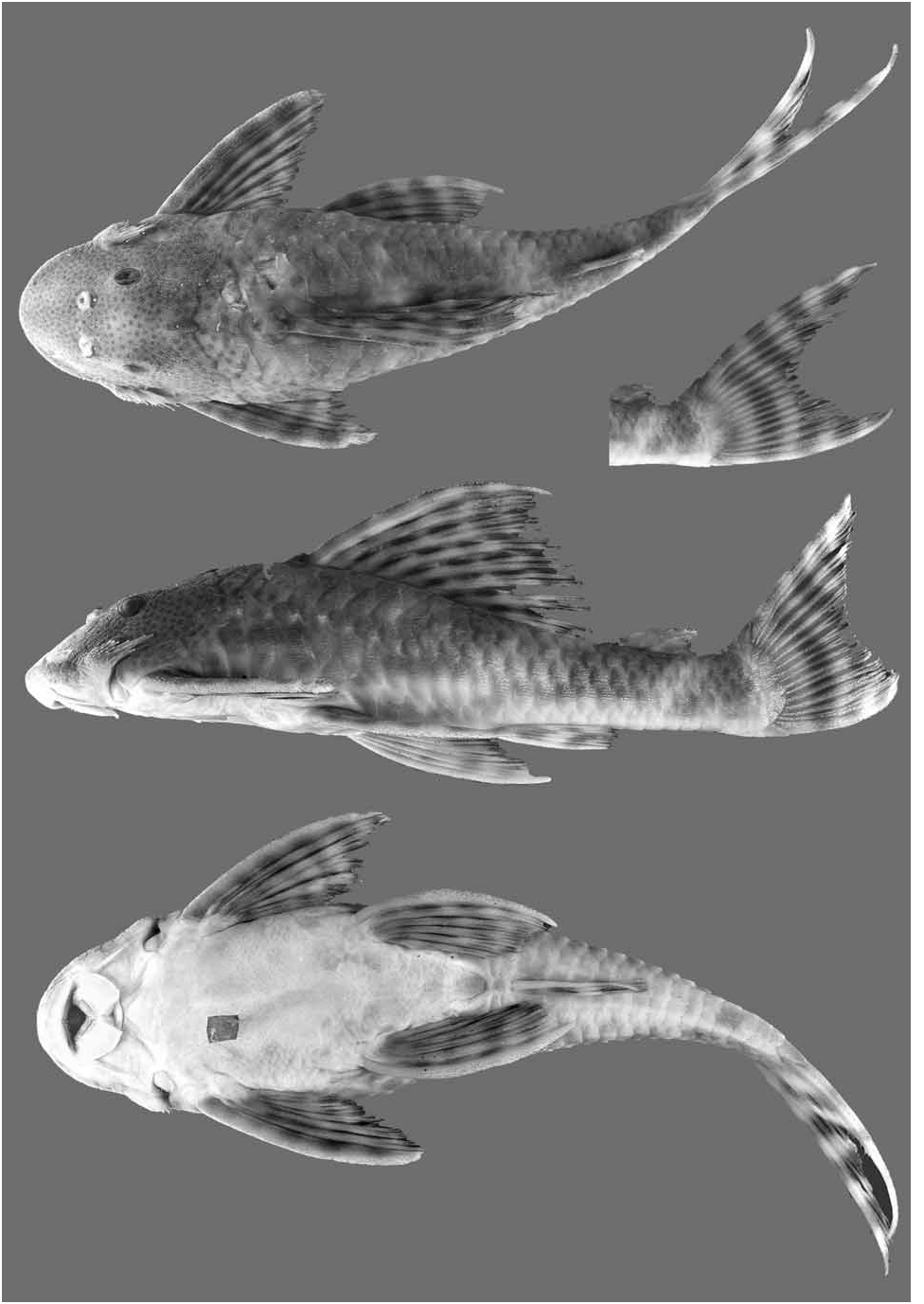 FIGURE 15. Dorsal, lateral, and ventral views of Peckoltia furcata, SIUC 36691, 139.4 mm SL. Inset is of extended caudal fin to show that the dorsal caudal-fin spine is longer than the ventral. Photographs by J.W. Armbruster.

FIGURE 15. Dorsal, lateral, and ventral views of Peckoltia furcata, SIUC 36691, 139.4 mm SL. Inset is of extended caudal fin to show that the dorsal caudal-fin spine is longer than the ventral. Photographs by J.W. Armbruster.