Taxonomic history. Cosmorrhyncha   was proposed by Meyrick (1913) to accommodate the single species Tortrix ocellata Mabille, 1900   from Madagascar. In his description, Meyrick incorrectly concluded that his previously described species Eccopsis acrocosma Meyrick, 1908   from Malawi, was conspecific with C. ocellata   , and he synonymized the two. Diakonoff (1981) redescribed the genus, comparing it to Eccopsis   , and retained the synonymy of the two included species. Apparently based on the superficially similarity among the types of the described species, Powell et al. (1995) synonymized the Neotropical Carpocapsa ocelliferana Walker, 1863   (from Brazil) with Cosmorrhyncha ocellata   and Cosmorrhyncha acrocosma   in the checklist of Neotropical Lepidoptera   without comment. Powell et al. (1995) also incorrectly transferred the genus from Olethreutini to Grapholitini. Aarvik (2004) revised the Afrotropical species of Cosmorrhyncha   ; he was the first to recognize that C. acrocosma   was distinct from C. ocellata   , and he described one species as new. Aarvik (2004) did not mention the occurrence of Cosmorrhyncha   in the New World. Razowski (2004) listed the genus in his review of Afrotropical tortricid genera, quoting key elements of Diakonoff’s (1981) diagnosis, and likewise mentioned the genus only from the Afrotropical Region. Brown (2005) listed five described species under Cosmorrhyncha   : C. acrocosma   , C. microcosma Aarvik   , C. ocelliferana   , C. ocellata   , and C. tonsana (Walker)   , transferring the last to the genus without comment and without noting that it was a new combination. Most recently, Razowski and Wojtusiak (2012) described C. obuduana Razowski and Wojtusiak, 2012   from Nigeria.

Morphology. Species currently assigned to Cosmorrhyncha   are extremely similar in facies and nearly indistinguishable from Neorrhyncha Aarvik, 2004   ( Aarvik 2004; Razowski and Wojtusiak 2012). All are medium-small, reddish- or grayish-brown moths with a distinct rounded patch of raised silver gray or bluish gray scales near the distal end of the forewing discal cell. Within the group Neopotamiae (sensu Diakonoff 1981; Aarvik 2004), the genitalia of Eccopsis   are extremely similar to those of Cosmorrhyncha   , but the forewing shape, size, and pattern of Eccopsis   are all dissimilar to those of Cosmorrhyncha   (many Eccopsis   are superficially similar to members of the Holarctic genus Olethreutes Hübner, 1822   and the pantropical genus Megalota Diakonoff, 1966   ). Males of Cosmorrhyncha   have a well-developed roll of secondary sex scales along the anal margin of the hindwing, and this feature is shared with many species of Eccopsis   , Olethreutes   , and Megalota   . In contrast to related and/or similar genera, the labial palpi in Cosmorrhyncha   and Neorrhyncha   are elongate, slender, porrect, and somewhat pointed apically, usually orange or reddish brown with a dorsal or subdorsal iridescent bluish or black longitudinal line along the second segment. However, the labial palpi of C. tonsana   lack this modification, and hence are more similar to those of putative related genera, e.g., Eccopsis   and Megalota   .

The male genitalia of Neotropical Cosmorrhyncha   are nearly indistinguishable from those of some species of Eccopsis   , with a broad uncus with a rounded, bifid, spined apex; a broadly hourglass-shaped tegumen with rounded dorso-lateral shoulders; elongate, digitate socii; a short but well-defined subbasal process (“labis” sensu Diakonoff 1966) from the costa of the valva; and a valva that is distinctly expanded at the lower edge of the cucullus. Afrotropical species of Cosmorrhyncha   can be distinguished from Eccopsis   by the less developed subbasal process of the valva and an elongate dense row of stout setae along the basal edge of the cucullus. The male genitalia of some species of Neotropical Cosmorrhyncha   can be distinguished from those of Eccopsis   by the presence of one or more stout spines from the basal one-third of the valva, immediately basad of the cucullus, but these are absent in a few species. Similar to Eccopsis   and Megalota   , a small degree of asymmetry is present in the male genitalia of some species of Cosmorrhyncha   , mostly in the configuration and number of spines on the valva.

The female genitalia of Cosmorrhyncha   are extremely similar to those of Neorrhyncha   . They also are similar to those of Eccopsis   , but those of Cosmorrhyncha   can always be distinguished by the shape of the signum—a straight, somewhat spindle-shaped plate from a weakly rounded base, shared with Neorrhyncha   . The signum in Eccopsis   usually bears two spindle-shaped plates or blades. In Afrotropical Cosmorrhyncha   the posterior margin of sternum 7 is broadly V-shaped; in the Neotropical C. tonsana   , C. ocelliferana   , and C. macrospina   it is more narrowly V-shaped ( Fig. 22–24 View Figures 22–26 ); and in the Neotropical C. albistrigulana   and C. osana   it is broadly rectangular ( Fig. 25–26 View Figures 22–26 ). This shape (V-shaped vs. rectangular or U-shaped) divides New World members of the genus into two groups. However, because females are unknown for three of the seven species, assignment of all species to one of these groups is not possible.

Relationships within Neopotamiae. On the basis of the nearly indistinguishable forewing shape and pattern, and the signum of the female genitalia, Cosmorrhyncha   is almost certainly the sister-group to Neorrhyncha   . However, male genitalia of the two genera are moderately divergent, most likely the result of numerous autapomorphies acquired by Neorrhyncha   . Based on numerous derived features of the male genitalia (i.e., uncus broad and distally bifid and spined; rounded dorsal shoulders of the tegu- men; valva broadened at the base of the cucullus), Cosmorrhyncha   + Neorrhyncha   is the putative sistergroup to Eccopsis   . Within the context of Neopotamiae, additional related genera include Paraeccopsis Aarvik, 2004   , Megalota   , Metendothenia Diakonoff, 1973   , Geita Aarvik, 2004   , Afroploce Aarvik, 2004   , and Afrothreutes Aarvik, 2004   ( Aarvik 2004), all of which share a similar signum. In contrast, the signum of Neopotamia Diakonoff, 1973   is very different – a pair of subequal, U-shaped plates ( Diakonoff 1973; Razowski and Brown 2018).

Although single gene trees are a poor substitute for those based on multiple genes and/or morphology, they often are consistent with the distribution of morphological characters at the species level, and hence, possess a degree of phylogenetic signal.

Figure 1 View Figures 1–3 is a neighbor-joining tree of 28 Cosmorrhyncha   sequences, regardless of sequence length, rooted with Paraeccopsis   and Eccopsis   . The monophyly of Cosmorrhyncha   is well supported (i.e., bootstrap support ( BS) = 94) in relation to the outgroup taxa, and within the genus, C. albistrigulana   is portrayed as sister to the remaining species. There is strong support for the monophyly of C. albistrigulana   (BS = 82), C. tonsana   (BS = 100), and C. osana   (BS = 97), but not for C. ocelliferana   (i.e., two sequences appear to be conspecific, but a third is not). Because the tree is based on sequences of variable length (i.e., missing data), and most of the species are represented by few examples, the relationships portrayed within Cosmorrhyncha   are not particularly compelling.

Figure 2 View Figures 1–3 is a neighbor-joining tree of 24 Cosmorrhyncha   sequences, rooted with Paraeccopsis   and Eccopsis   . In this tree the sequence data for all specimens excludes the 200bp segment that could not be amplified for several specimens. For example, C. osana   was excluded from the analysis because its short sequences overlap considerably with the 200bp segment that was missing for several specimens. As in Figure 1 View Figures 1–3 , the monophyly of Cosmorrhyncha   is well supported (BS = 73) in relation to the outgroup taxa. However, within the genus, C. tonsana   is portrayed as sister to the remaining species. Although this tree suffers from many of the same shortcomings as the tree in Figure 1 View Figures 1–3 , the sequences used to generate Figure 2 View Figures 1–3 are more consistent in length among the sampled taxa. This arrangement, with the other Cosmorrhyncha   comprising a clade without C. tonsana   , is consistent with morphology; i.e., the short labial palpi and putative plesiomorphic wing pattern of C. tonsana   ; and it is perhaps the most compelling of the three trees.

Figure 3 View Figures 1–3 is a neighbor-joining tree of 23 Cosmorrhyncha   sequences, rooted with Paraeccopsis   and Eccopsis   . This tree includes only specimens for which sequences longer than 500bp were analyzed. As a result, only three species of Cosmorrhyncha   are included (less than half of the recognized Neotropical species), which provides extremely limited insight into relationships among the species of the genus. As in the other trees, the monophyly of Cosmorrhyncha   is well supported (BS = 97), as is the monophyly of C. albistigulana   (BS = 87) and C. tonsana   (BS = 100), and two of the three specimens of C. ocelliferana   .

Biogeographic implications. The geographic distribution of Cosmorrhyncha   is intriguing, with four species from the Afrotropical region, seven species from the Neotropical region, and none from elsewhere. While this Afrotropical-Neotropical connection suggests a Gondwanan origin of the genus, the group is too recent for its distribution to be the result of continental drift ( Fagua et al. 2016). Several other tortricid genera are found in both the Afrotropical and Neotropical Regions, but most are not restricted to this distribution. For example, Megalota   is species-rich in the Neotropical and Afrotropical Regions, but also occurs in Australia and the tropical regions of Asia, and is absent from typical Gondwanan locales (e.g., Notogea (Australasia) and the Patagonian Province of the Neotropical Region) ( Brown 2009). For Megalota   and other genera, the pattern is pantropical rather than Gondwanan. A similarly intriguing pattern is illustrated by Hystrichophora Walsingham, 1879   , distributed in the Afrotropical and Nearctic regions ( Agassiz and Aarvik 2014; Agassiz 2016). Because these patterns are almost certainly not the result of continent drift, it is likely that the distributions of these and many other tortricid groups are the result of dispersal.

While vicariance undoubtedly played a major role in the early evolution and distribution of Lepidoptera   , dispersal may be responsible for many of the observed distributions of Lepidoptera   species and genera today (e.g., Kergoat et al. 2012; Rota et al. 2016). Rota et al. (2016) reported dispersal over large, intercontinental distances in Choreutidae   : four between Australasia and the Afrotropics, and one each between the Afrotropical and Oriental and Nearctic and Afrotropical Regions. Kergoat et al. (2012) noted for Spodoptera Guenée, 1852   ( Noctuidae   ) the “… occurrence of two symmetric long-distance dispersal events between the Afrotropical and the Neotropical region, which appear to have occurred in the late Miocene.” However, Spodoptera   are known to be strong fliers, and hence their observed distributions are more likely to be the result of dispersal. Frolov (2013) also invoked a similar trans-Atlantic dispersal for the scarab beetle genus Stenosternus Karsch, 1881   ( Coleoptera   : Scarabaeidae   : Orphninae   ), concluding that “Vicariance of the previously Gondwanan group due to the continent breakup seems the least probable hypothesis in the case of the orphnines.”

Larvae are translucent pale green with a black to dark-brown head capsule and a pale greenish-amber prothoracic shield with a narrow, weakly bilobed, anterior band. They construct a shelter from a single rolled leaf from which they feed and within which they eventually pupate ( Fig. 27–30 View Figures 27–30 ). Pupae are typically tortricid with two rows of dorsal spines, and typically olethreutine without a distinct cremaster. The pupal stage lasts 7–8 days, and field-collected larvae reared in captivity rarely produced parasitoids. 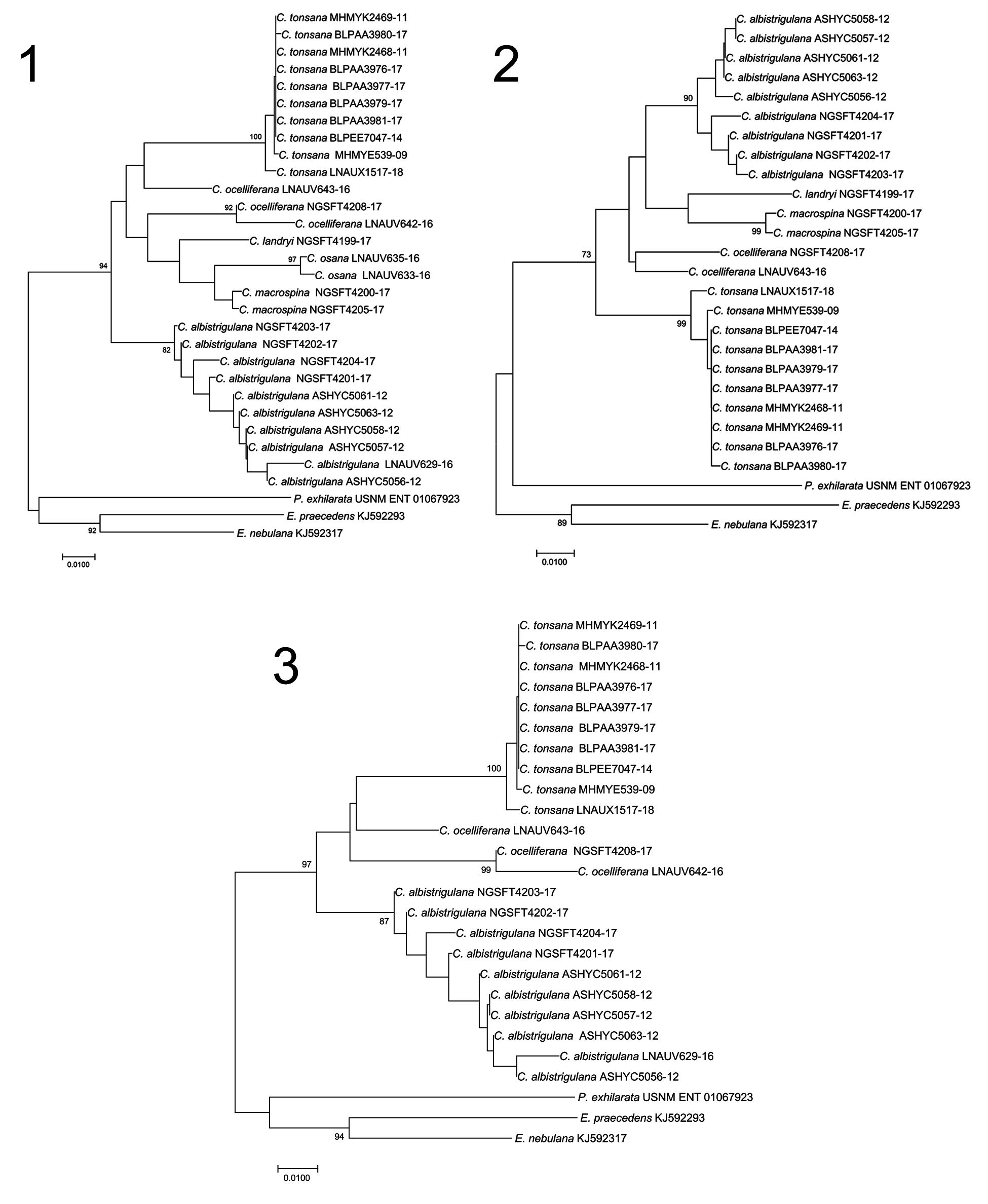 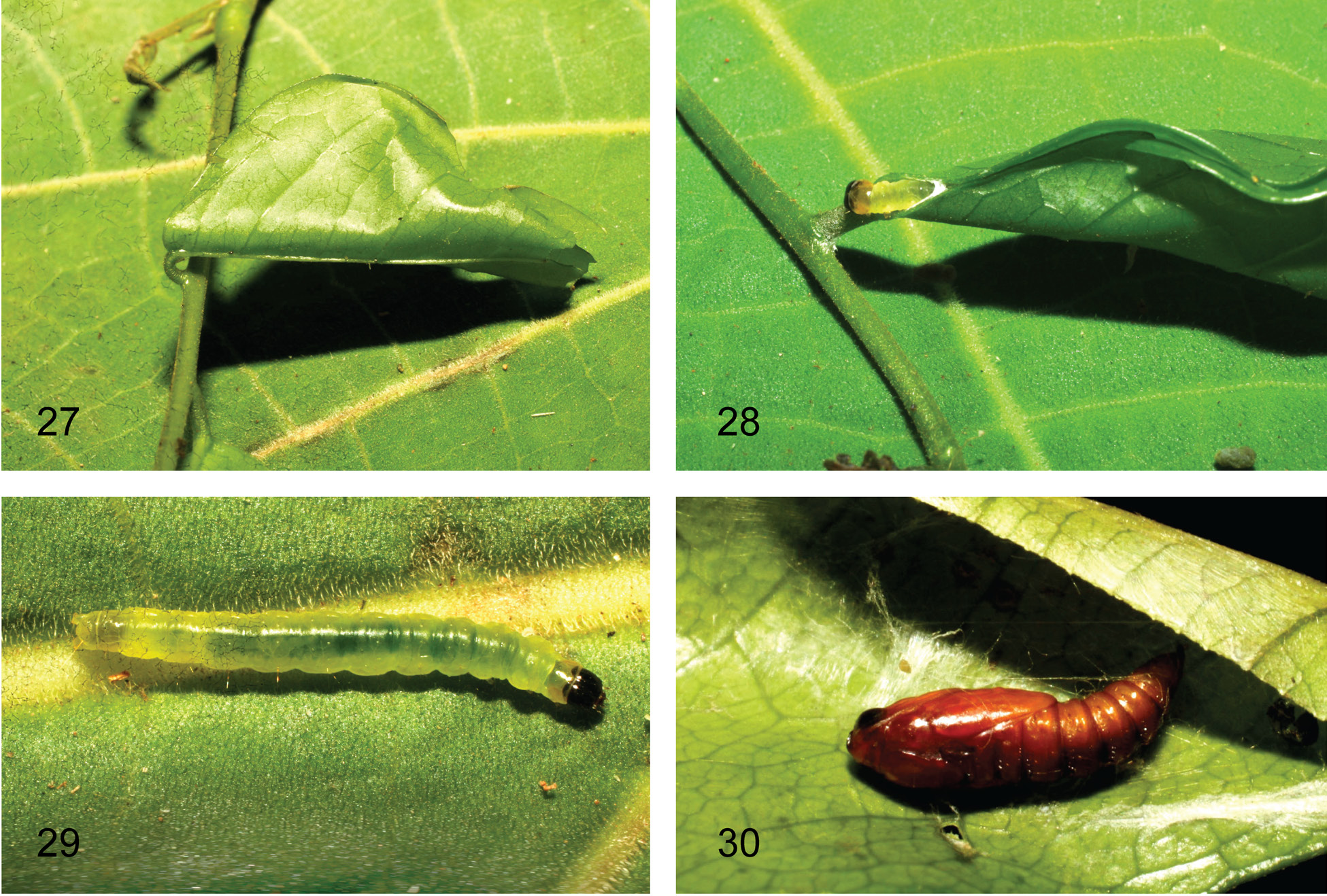