So far, the two most widely distributed species of Paralaophonte are P. brevirostris and P. congenera ( Lang 1948; Yoo and Lee 1995; Wells 2007; Huys and Lee 2009). The distinction between these two species has been problematic ( Huys and Lee 2009). Willey (1935) stated that the only reliable differences between these two species (which he found to co-occur in Bermuda) are the number of segments and the presence / absence of a conical projection on the female second antennulary segment (six-segmented and with a conical projection in P. brevirostris , seven-segmented and without or with a very small conical projection in P. congenera ). In that same paper, Willey (1935) found that the rostrum of his material of P. brevirostris (deeply bifid at tip) deviated from the commonly accepted brevirostris - type (only slightly bifid), and created the variety P. brevirostris fissirostris Willey , which was upgraded to subspecies level by Lang (1965) and subsequently declared invalid by Huys and Lee (2009).

Conversely, Willey (1935) found that the rostrum of his material of P. congenera (plain in front, and conical in side view) also deviates from the typical congenera - type (with distinctly bilobed tip). Nicholls (1945) had no difficulties in attributing his Paralaophonte material to P. congenera based on the presence, in his material, of a seven-segmented female antennule without any projection on the second segment, and other characters of the male (even though he noted that the females he found in Australia possess a plain rostrum, whereas that of the males is definitely bilobed).

Similarly, Yeatman (1970) had no difficulty in attributing his material from Chesapeake Bay to P. brevirostris based on the presence of a six-segmented female antennule, but without or at most with a small conical projection on the second segment ( Yeatman 1970: 34, fig. 50), and he further noted some variability in the armature formula of the third exopodal segment of P3 and P4. Hamond’s (1973) material from North Carolina agreed entirely with P. congenera , even though he found an acute thorn similar to that described before for P. brevirostris . Seemingly, Hamond (1973) relied on the presence of a seven-segmented female antennule to identify the specimens as P. congenera . Wells and Rao (1987) found an amazing range of variability in the female antennule of the P. brevirostris population from the Andaman and Nicobar Islands. This variability ranged from seven-segmented to the case where the two distal segments are “coalescent with a variably developed trace of the suture”, and the second segment being either naked or with a small conical spur. Wells and Rao (1987) noted that Hamond (1972) found some specimens of P. brevirostris bearing a seven-segmented female antennule, which could, eventually, lead to confusion with P. congenera , and suggested the shape and size of the rostrum and the cephalothorax as the only reliable criteria to separate P. brevirostris from P. congenera . These two species have been shown to display a wide degree of intra- and / or inter-population variability ( Huys and Lee 2009), and some authors (i.e. Mielke 1981) suggested that such variability could be a reflection of the presence of allopatric or sympatric species.

Even though certain authorities ( Wells 2007; Huys and Lee 2009) make a clear distinction between these two species in their respective keys, the identity of P. brevirostris and P. congenera is blurred and their distinction remains difficult because of the variability in some key characters (i.e. number of segments of the female antennule, presence / absence of a well-developed projection on the second antennulary segment, and shape of the rostrum), and because the variability of one species seems to overlap the variability of the other. In their analysis of the observed variability in some American species of Cletocamptus Schmankewitsch, Gómez et al. (2004) observed that the whole range of variability of a species seldom overlaps the range of variability of other species, suggesting that such variability should be under genetic control. As far as evidenced in the literature, the range of variability of P. brevirostris overlaps almost entirely the range of variation of P. congenera , casting doubts on the validity of separating these two species. Also, it has been suggested that the use of genetic tools ( Willey 1935) and a revision of both species based on collections from as wide a geographical range as possible ( Hamond 1973) would contribute to a better understanding of their identity.

The Mexican material presented herein is provisionally assigned to P. congenera . The morphological variability falls within the range described above and, as done before by others, we relied on the presence of a seven-segmented female antennule bearing a small conical process on the second segment ( Figure 11D View Figure 11 ), the length: width ratio of the caudal rami ( Figures 10A, B View Figure 10 , 11A–C View Figure 11 ), and the shape of the female P5 ( Figure 12E View Figure 12 ) to attribute this material to P. congenera , even though, the rostrum is only slightly bifid at tip (not shown). 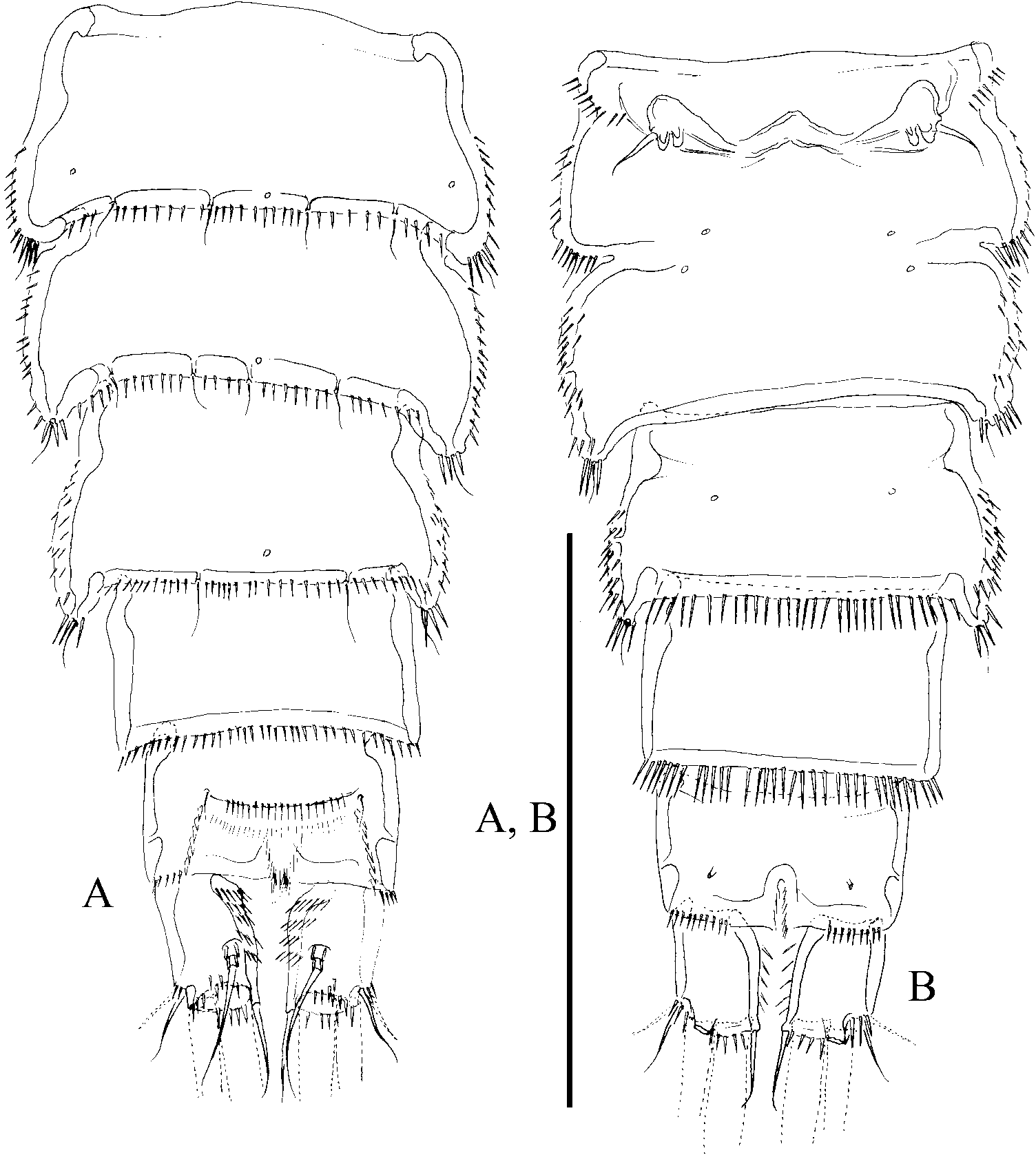