Diagnosis: Stryphnodendron conicum resembles S. guianense , but differs by its conical petiolar nectaries, with 3 distinct layers (vs. verruciform with an elongated base), rachis nectary conical to verruciform with an elongated base (vs. verruciform), rachilla nectary conical (vs. verruciform), tuft of hairs on the lower surface of the blades absent (vs. usually present, sometimes inconspicuous), calyx yellow-pubescent with apiculate lobes (vs. glabrous to rarely subglabrous with no evident lobes) and corolla pubescent at the lobes (vs. glabrous).

Etymology: —The name of this new species refers to the conical shape of the rachillae´s floral nectaries which is very distinct from other morphologically close species.

Remarks: — Stryphnodendron conicum vegetatively resembles all the multifoliolate Amazonian species with medium-sized leaflets, yellowish inflorescences and indumentum in calyx and corolla (table 5). The specimens of this new species have often been named as S. guianense based on blade shape and the presence of unilateral tuft of trichomes on its lower surface, since the only identification key to Amazonian species of the genus to date ( Martins, 1981) used vegetative characters. However, by the time this key was published the concept of S. guianensis showed many morphological and nomenclatural problems, and the circumscription of the species was usually broadened and often mistakenly included other species of Stryphnodendron . In fact, the analysis of a large number of specimens has showed that the tuft of trichomes are only rarely absent on the lower surface of the blades of S. guianense (vs. absent in S. conicum ), and the new species shows other distinct characteristics such as extrafloral nectaries of the rachis conical to verruciform with an elongated base, calyx yellow-pubescent and indumentum ed corolla. Moreover, the leaf primordia at the apex of the branches show very developed petiolar extrafloral nectaries, almost the size of a mature leaf´s, a very characteristic feature and useful in the identification of the specimens.

Stryphnodendron conicum can also be confused with S. pulcherrimum , with which sometimes occurs sympatrically, but the new species shows larger and fewer leaflets, evident nerves on both surfaces of the blade, extrafloral nectaries of the rachillae conical and the calyx about half the length of the corolla. Stryphnodendron microstachyum , another morphologically close species, has flowers with the calyx usually glabrous to subglabrous (very rarely sparsely pubescent) and a glabrous to rarely subglabrous corolla, besides shorter inflorescences (usually 6.5–10 cm long) and vegetatively, the leaflets of this species are usually widely oblong, oblong-rhombic to oblongovate, whereas in S. conicum they are elliptic to elliptic-ovate.

Distribution and habitat: —This taxon is restricted to areas of campinas on sandy soil, near watercourses, in the region of the lower Trombetas river in Pará state (municipalities of Porto Trombetas and Oriximiná). The area of occurrence of this taxon corresponds to the phytogeographic province Jari-Trombetas.

Conservation: —Vulnerable (VU B2ab(ii,iii)) [AOO= 8.000 km 2, EOO not measurable]. The species occurs in a very restricted area in Amazonia that is subject to intensive mining activities, and preliminarily this would assign it the status of Critically Endangered. However, there are at least six records of the new species within its limited distribution (one of them in a conservation unit, FLONA Saracá), and based on the available data we assign Stryphnodendron conicum the status of Vulnerable. 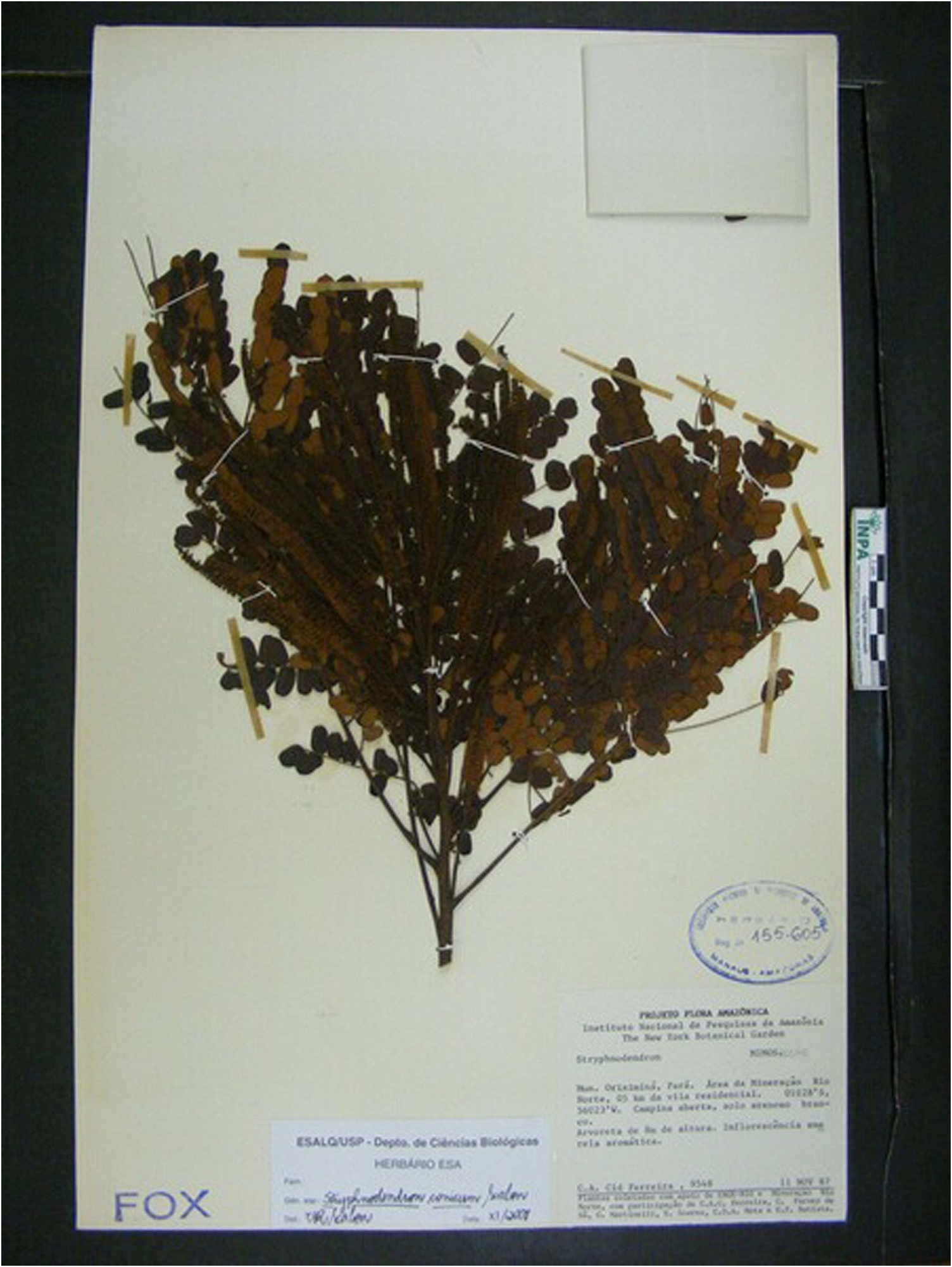