Type material examined. Parts of holotype or/and paratype female(s) [ MLPA] on slide labeled [ip]: “( Cosmocomoidea   ) Lymaenon coxalis A. Ogl.   ♀♀ San Mateo, Esmeraldas Ecuador, J. Förster 14–VI–1956.”. According to the original description the species was described from two females. The mounting medium on the original slide ( Fig. 4 View FIGURE 4 ) was so dark that parts of the two poorly preserved, fragmented specimens were hardly visible, so in the course of this study they were remounted into Canada balsam under five coverslips, as follows: 1) head; 2) two forewings, one incomplete and the other split in two parts; 3) two fragmented antennae (F8 of one of them missing); 4) body and fragmented leg segments; 5) a fragment of a forewing. It appears that most of the parts belong to just one specimen, and the only remaining part of the second specimen may be the fragment of a forewing, although it is also possible that these fragments belonged to both specimens of the type series. It is also impossible to determine whether most of these parts belong to the holotype or the paratype; we assume that the more complete specimen would have been chosen by Ogloblin as the holotype.

Mesosoma ( Fig. 275 View FIGURES 273 – 276 ). Mesoscutum and scutellum almost smooth; propodeum ( Fig. 274 View FIGURES 273 – 276 ) with well-developed, subparallel submedian carinae extending to and connecting just below anterior margin of propodeum, and with a transverse rugosity closer to posterior than anterior margin connecting each submedian and lateral carina [not many rugosities in posterior half of propodeum as originally described and erroneously illustrated by Ogloblin (1959b, fig. 13)]. Forewing ( Fig. 276 View FIGURES 273 – 276 ) about 3.9x as long as wide; longest marginal seta about 0.25x maximum wing width; disc with a large oval brown spot in apical half (measured from apex of venation) not extending to anterior or posterior margins, bare behind submarginal and marginal veins and setose elsewhere.

Petiole about 1.2x as long as wide; gaster just a little longer than mesosoma; ovipositor about 0.9x length of gaster, barely exserted beyond gastral apex; about 1.1x as long as mesotibia.

Diagnosis. Gonatocerus (Cosmocomoidea) coxalis   is a member of the morrilli   subgroup of the ater species group. It is characterized by the following unique combination: propodeum with well-developed, subparallel submedian carinae extending to and connecting just below anterior margin, and with transverse rugosity closer to posterior margin connecting each submedian and lateral carina ( Fig. 274 View FIGURES 273 – 276 ); and forewing disc with a large oval brown spot in the apical half (measured from apex of venation) not extending to anterior or posterior margins, and bare behind submarginal and marginal veins ( Fig. 276 View FIGURES 273 – 276 ). It may be confused with the undescribed G. ( Cosmocomoidea   ) sp. 3 from the G. (Cosmocomoidea) tuberculifemur (Ogloblin)   species complex, known from Argentina, Bolivia, and Brazil (Triapitsyn et al. 2008). Both have an oval brown spot on the forewing disc, but the latter has the petiole wider than long and no rugosity on the propodeum connecting each submedian and lateral carina. 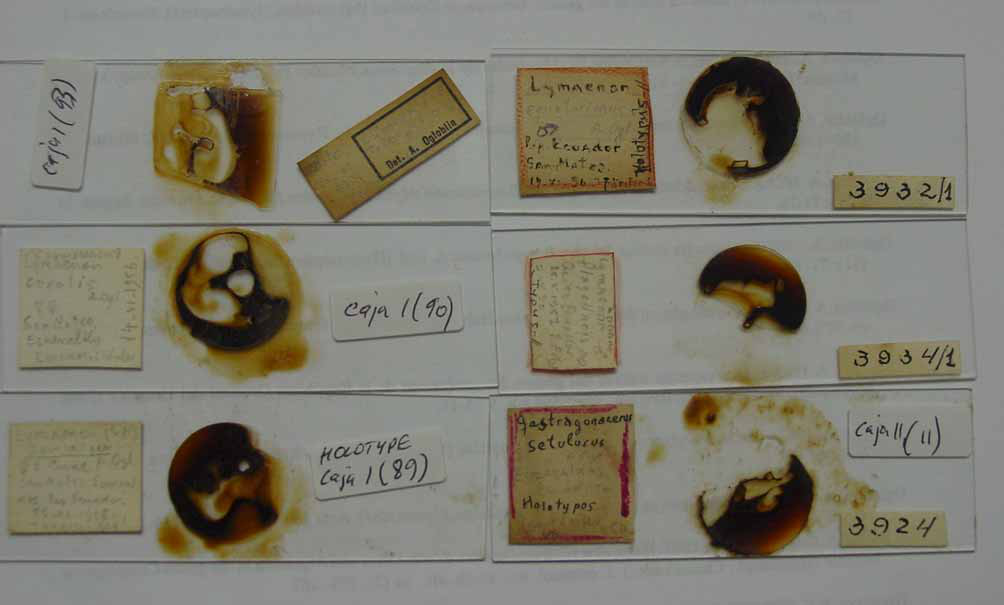 FIGURE 4. The original type slides of the six out of seven species of Gonatocerus described by Ogloblin (1959 b) from Ecuador, before the specimens on them were remounted into Canada balsam from the dark, dried water-soluble mounting medium.