Natural history. This species is the most common Mesosemia  at the Colombian study site, recolonizing the site each year after being absent for two to three months during the dry season. Populations peaked between June and August of each year and then diminished until they disappeared in the last quarter of the rainy season. Males displayed territorial perching behavior at a specific microhabitat in a low lying swampy area near the edge of a stream. Males used the same location every year for territorial displays and were recorded in low numbers (1–7) on the days they were present. They were seen perching between 9:30 to 16:00 h, but the greatest activity was observed between 11:00 to 13:00 h. When in a group the males interacted in short chases and spiraling dogfights and then returned to perch with their wings held partially open on vegetation between 1 to 2 m in height. Males appeared to detect females before they were seen. When a female was detected the male flight behavior abruptly changed and the male started to fly back and forth at high speed over a 50 meter course until the female was located. The male then accompanied the female in flight and the pair soon landed on a low plant leaf, crossed over to the underside of the leaf and promptly mated. Mating was observed near of the male territory between 10:00 to 12:00 h, and copula lasted from 45 to 60 min (n = 4). Females were much less frequently observed, usually as a single individual flying low near the stream or in other parts of the forest briefly alighting on plants in a typical host plant search behavior, ovipositing or occasionally in copula. Feeding behavior of adults was never observed, as reported for other Mesosemiina ( Hall & Willmott 2000). At the study site in Colombia only Psychotria caerulea  was used as a host.

Eggs were laid in clusters of 26 to 145 (n = 98) in irregular rows on the underside of mature leaves normally between 0.5 and 1.5 m high ( Figs. 27–29View FIGURES 25–27View FIGURES 28–40). A small space was left between each egg with a few eggs barely touching. Larva emerged through a small hole (~ 0.25 mm) cut through the top of the egg and the remainder of the exochorion was not eaten. Eggs hatched during the day but all larvae molted at night. After leaving the egg, larvae congregated alongside the egg mass and began feeding side by side between major leaf veins, leaving the upper epidermis and minor leaf veins intact ( Fig. 30View FIGURES 28–40). After feeding for three days the larvae entered a premoult phase, stopped feeding and turned yellow, exhibiting cycloalexic behavior ( Jolivet et al. 1990, Dury et al. 2014) with the head inside and the abdomen in the periphery ( Fig. 31View FIGURES 28–40). Second instar move to the tip of the same leaf underside and began feeding, again leaving the upper epidermis of the leaf intact ( Fig. 32View FIGURES 28–40). After feeding for 3 days the larvae migrated to a new leaf and aggregated in a mass for the premoult phase. When the gut emptied they turned bright yellow ( Fig. 33View FIGURES 28–40). The third instars moved as a group and started eating at the tip of the new leaf ( Fig. 34View FIGURES 28–40); in the first days they left the upper epidermis of the leaf as they did in the previous instars. Eventually they broke through this thin membrane and the larvae began consuming all the leaf layers. Fourth and fifth instars continued feeding in aggregation ( Figs. 34–37View FIGURES 28–40), consuming the tissue between leaf major veins. They fed from the leaf tip towards the petiole and every 1–2 cm the caterpillars would clip off the uneaten veins ( Fig. 35View FIGURES 28–40). When the leaf was devoured they moved as a group to a new leaf. Most of the feeding activity was done on the underside of the leaves but when crowded some larvae moved to the upper surface ( Fig. 37View FIGURES 28–40). Mature larvae fed both day and night, alternating periods of feeding and rest. When the larvae were numerous they split into groups to feed on different leaves but reunited in the prepupal phase ( Fig. 38View FIGURES 28–40). Frass pellets were ejected with a flick of the abdomen preventing their accumulation on the plant. Prepupal larvae changed color, stopped feeding and wandered as a group up and down the plant stems for several days. Pupation sites were on the uppermost branches of the host plant where the larvae assembled in tight formation, spun the silk attachment pad and then turned head downwards ( Fig. 38View FIGURES 28–40), pupation occurred at night. Broods eclosed as a group during the afternoon of the 10th day from 13:00 to 17:30 h, or bimodally, some in the afternoon and the remainder the next morning between 5:30 and 9:00 h. Protogyny was observed; the females emerged first, followed shortly by the males in each cohort. The sex ratio was slightly skewed in favor of males at 1:0.93 (n = 272). The development time from egg to adult was 45–46 days (n = 14 broods).

Three Hymenoptera  species were found parasitizing M. cippus  immatures. An undetermined species of microparasitoid wasp of the genus Telenomus Halliday, 1833  ( Platygastridae  : Telenominae  ) ( Figs. 41–42View FIGURES 41–48), parasitized 74% of all eggs, with the highest losses during the months of July and August, the middle of the rainy season. They were observed arriving at the egg clusters immediately after oviposition ( Fig. 28View FIGURES 28–40) and may be phoretic. Development time of this tiny wasp was 12–20 days. Another wasp, an undetermined species of the genus Hyposoter Foerster, 1869  ( Ichneumonidae  : Campopleginae) was only observed affecting two broods (n = 14). During the attack of the Hyposoter  wasp, larvae defended themselves by raising their heads, regurgitating and everting the TNOs. Consequently, the attacks were fast (1–2s) and interspersed by moments of rest and cleaning behavior. The larvae of this parasitoid emerged from fourth instars and spun a cocoon with the empty skin of the caterpillar fixed to the dorsal surface ( Figs. 43–44View FIGURES 41–48). The adult wasps emerged after 6 days. In four broods a few late instars (n = 11) were parasitized by Chalcididae  ( Brachymeria Westwood, 1829  ) wasps ( Fig. 45View FIGURES 41–48) which emerged from the pupa through an anterior hole. Fourteen broods with a total of 537 first instars were tracked and the numbers of individuals of each instar were counted. Mortality from first instar to pupa was 44%. Loss due to parasitoids was 15% and the remainder of the losses due to undetermined causes. Caterpillars were occasionally observed being attacked by an ectoparasitic biting midge ( Diptera  : Ceratopogonidae  ) ( Fig. 46View FIGURES 41–48), but the fly attacks were non-lethal. A nymph of a chrysopid (Neuroptera) was also recorded predating third instar larvae ( Fig. 47View FIGURES 41–48). In response to attacks by the biting midge and predatory chrysopid the M. cippus  larvae everted the TNOs ( Figs. 46– 47View FIGURES 41–48).

In the field, we did not find any larvae being tended by ants, only occasional encounters by workers of Monomorium floricola (Jerdon, 1851)  , Wasmannia auropunctata (Roger, 1863) (Myrmicinae)  , and a small undetermined Camponotus  species (Formicinae). When a larva sensed the approach of ants, the TNOs were extruded instantly. The TNOs were functional in all instars. In simulated larva-ant laboratory experiments, larvae also everted the TNOs when manipulated or touched by objects (e.g. forceps) and when they perceived the approach of ants ( Fig. 48View FIGURES 41–48). The TNO secretion consists of a drop of a viscous and opaque liquid and ants that contacted the secretion engaged in typical cleaning behavior and further avoided the caterpillar. In addition, larvae also exhibited other behavioral defense strategies as beat reflex, regurgitating and biting. When touched by ants pupae moved the head and thorax laterally.

Pupa ( Figs. 39–40View FIGURES 28–40, 69–71View FIGURES 63–71). Duration 10–11 days (n = 114). Maximum length 13 mm, width at widest point of A2, 3.5 mm. Body brownish gray, with four black stripes along the abdominal segments, wing pads with several black stripes with indistinct and irregular borders giving them a fuzzy appearance. Four slight dorsolateral ridges extending from A2 to A8. Between the black areas were irregular spots of brown-tan. Prominent reddish brown areas dorsally on thorax and A2 crest ( Fig. 40View FIGURES 28–40). Tegument corrugated with inconspicuous tubercles. Numerous short white setae cover the dorsal surface and most of the lateral surface. Mesothoracic spiracles black and slitshaped ( Fig. 69View FIGURES 63–71); others with a semi-elliptical margin and surrounded by PCOs ( Fig. 70View FIGURES 63–71). Eyes setose. Silk girdle crossed segment A2 and was often embedded in the cuticle ( Fig. 70View FIGURES 63–71). Girdle was fragile and broke upon emergence, giving the impression that the pupae lacked girdles. Metathoracic segment raised and almost at the level of the segment A2. Cremaster is wide and rounded. Abdominal segments A5 through A9 are smooth ventrally and flat allowing for close contact with the substrate. Female pupae show a longitudinal genital scar in the center of the ventral surface of segment A8. 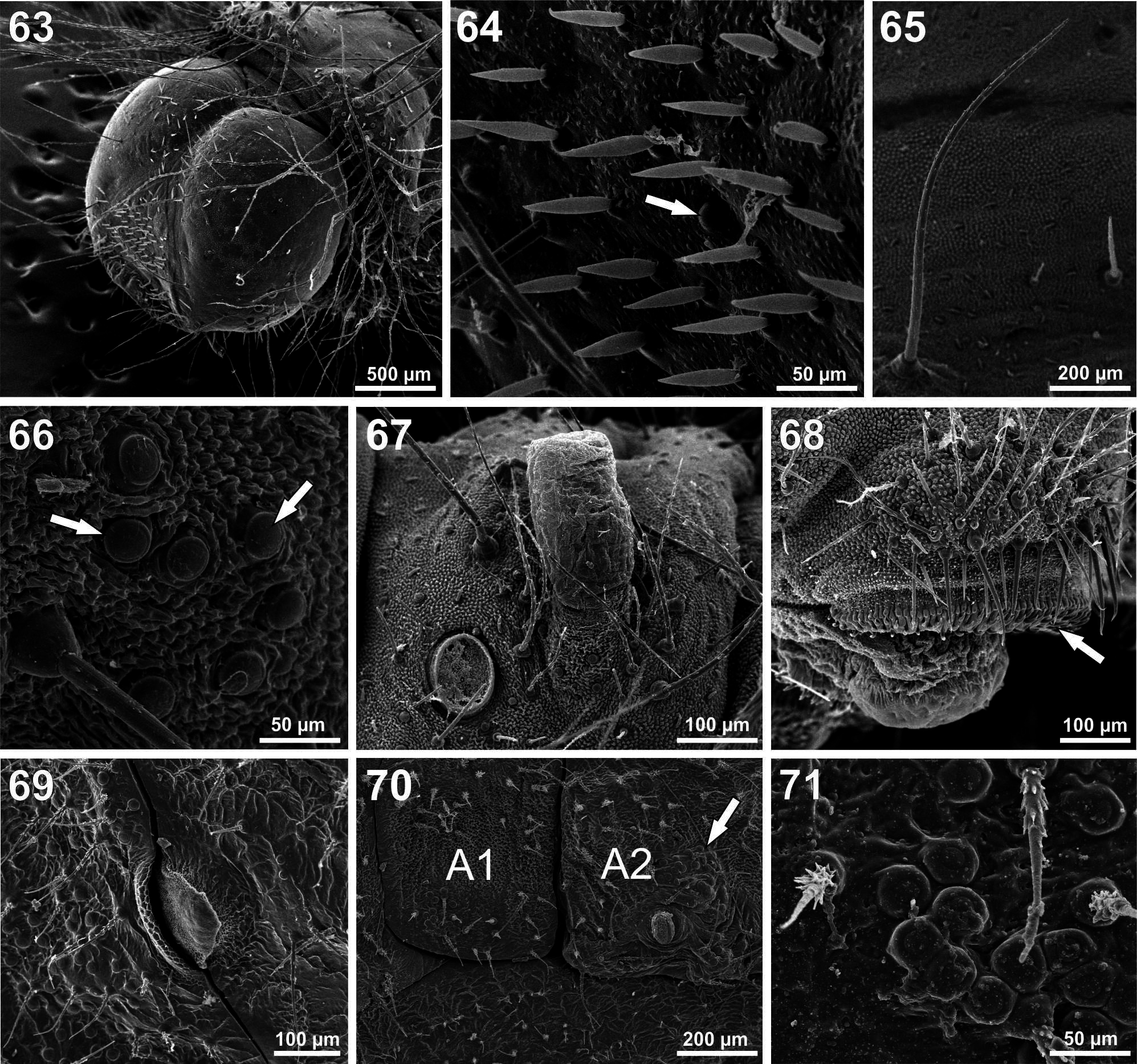