Etymology. Derived from the Spanish word camaroncito, meaning “little shrimp” and obviously alluring to its small size; used as noun in opposition.

Ecology. Near-shore coarse sand flats with abundant pieces of coral rubble, usually with seagrass; all specimens were collected under rubble at depths of 0.5–1.5 m.

Variation. The non-type specimens from Utila and San Blas agree with the holotype in all features except for the absence of a subapical tooth on the ventral margin of the rostrum in the Utila and San Blas specimens ( Fig. 5m View FIGURE 5 ) and the presence of a minute median notch on the posterior margin of the telson in the San Blas specimen ( Fig. 5n View FIGURE 5 ); this notch is absent or at least appears to be indistinct in the holotype ( Fig. 5l View FIGURE 5 ). The San Blas specimen is missing its major cheliped, but most other features, including the very characteristic frontal margin and the presence of small spaced teeth on the cutting edges of the minor cheliped fingers leave no doubt that it belongs to S. camaroncito sp. nov.

Holthuis (1990) provided detailed drawings of the major cheliped and second and third pereiopods of several specimens from Curaçao that he assigned to S. arubae . The major cheliped, which was missing in the holotype, differs from that of S. camaroncito sp. nov. in the higher number of teeth on the finger cutting edges (7–8 in S. camaroncito sp. nov. vs. 14–15 in S. arubae ). However, the third pereiopod of Holthuis’ S. arubae differs from that of Schmitt’s S. arubae in two important details. The third pereiopod illustrated by Holthuis is generally slender, with a fairly narrow and long dactylus (~0.4 propodus length), and with a small spine on the ischium ( Holthuis 1990: fig. 1d). The third pereiopod figured by Schmitt is generally stouter, with a stout, short dactylus (~0.3 propodus length), and without spine on the ischium ( Schmitt 1936: fig. 2e). These differences raise questions about the correctness of either Schmitt’s drawings or Holthuis’s identification. Both Schmitt’s and Holthuis’ specimens of S. arubae should be re-examined and refigured more completely. Noteworthy, the third pereiopod of S. camaroncito sp. nov. ( Fig. 5g View FIGURE 5 ) is similar to the one illustrated by Holthuis (1990) for the Curaçao specimens of S. arubae .

The remaining western Atlantic species of the S. serratidigitus group, viz. S. teres from Ascension Island and the eastern Caribbean Sea ( Guadeloupe), S. setosus from Ascension Island and NE Brazil (Atol das Rocas), and S. rocas from NE Brazil (Atol das Rocas), appear to be more distantly related to S. camaroncito sp. nov. All three species differ from S. camaroncito sp. nov. by the much more swollen major chela, the absence of a small subapical tooth on the ventral rostral margin (although this character seems to be variable in S. camaroncito sp. nov., see above), and the presence of a deep median notch on the posterior margin of the telson (see Manning & Chace 1990; Anker 2007). In addition, S. rocas differs from the new species by the shape of the frontal margin of the carapace, with stronger orbital teeth, and the absence of a spine on the ischium of the minor cheliped ( Anker 2007), whereas S. setosus is immediately recognisable by the thickened erect setae covering the carapace, abdomen and telson ( Manning & Chace 1990; Anker 2007). None of the currently known Indo-West Pacific species is closely related to S. camaroncito sp. nov. 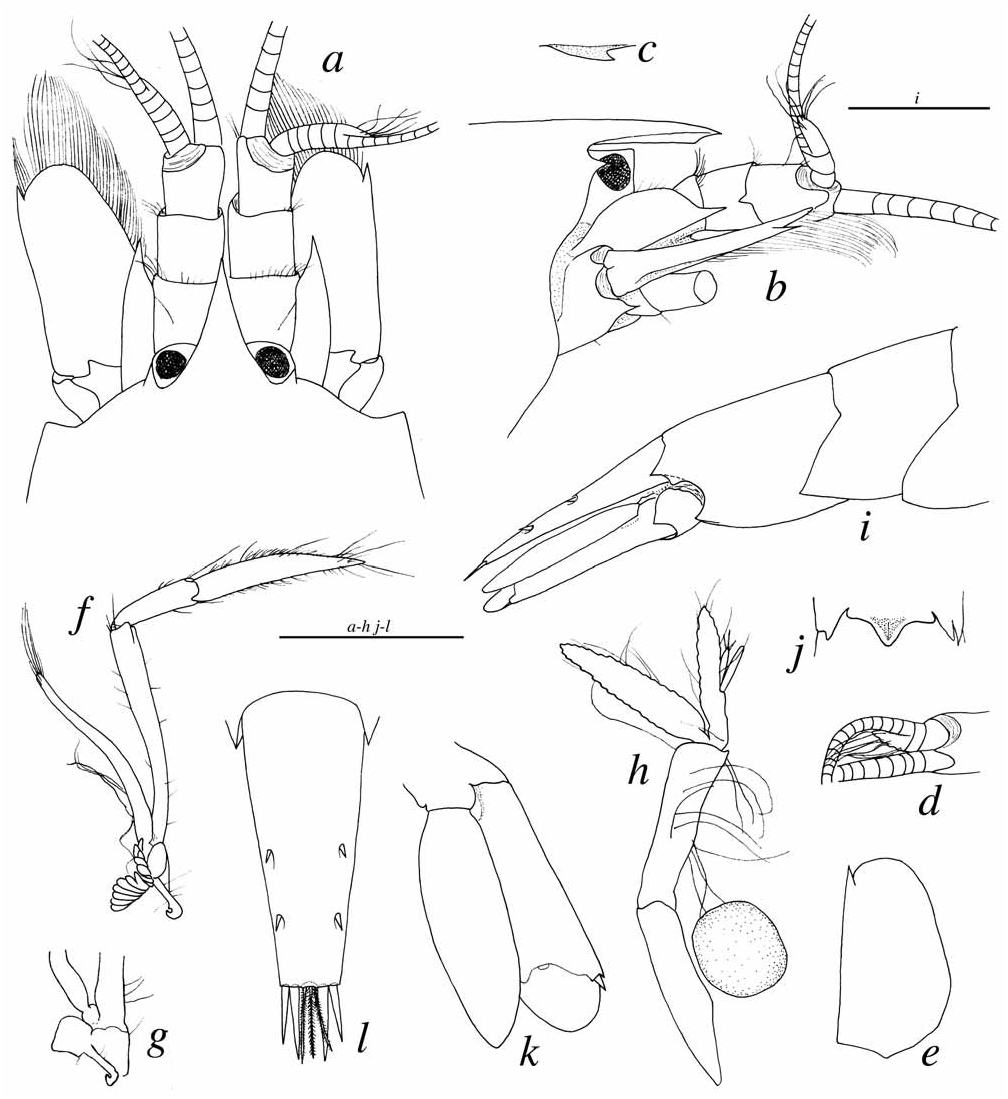 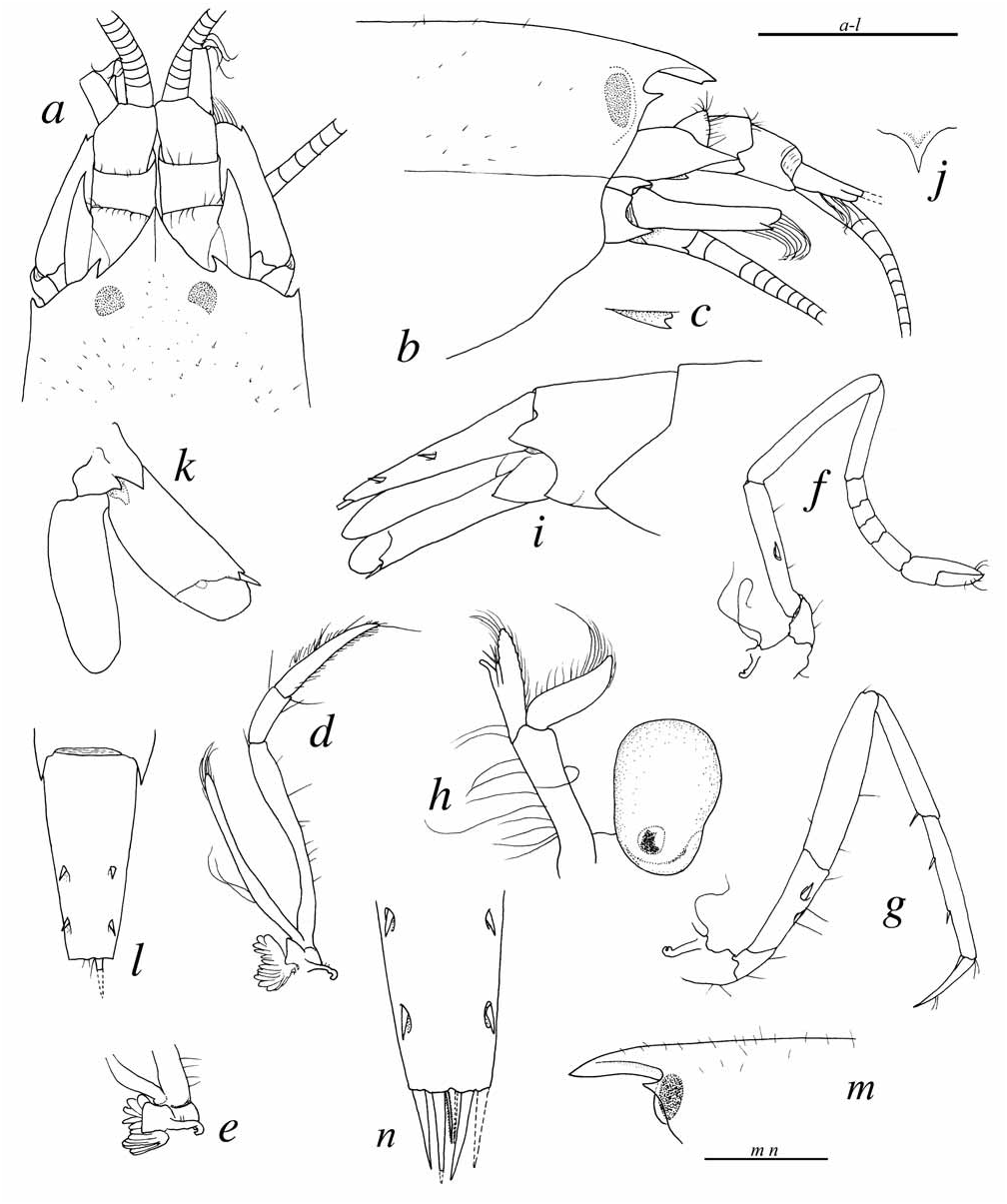