Bombus formosellus is known only from Taiwan ( Frison 1934; Chiu 1948; Starr 1992). Bombus pyrosoma s. lat. has been treated as a widespread Asian species by Williams (1998), to include the taxon formosellus. Here, B. formosellus is recognised as separate from the north Chinese B. pyrosoma s. str. because of their unique and strongly divergent species coalescents in the COI gene ( Fig. 10 View Fig ), corroborated by differences in morphology (see the Diagnosis). The morphological differences are subtle, but do appear to support the two as separate species within a morphologically more distinctive complex of pyrosoma s. str. + formosellus.

Our PTP analysis ( Fig. 10 View Fig ) supports relatively strongly two coalescents in the COI gene for the north Chinese B. pyrosoma s. str., and the Taiwanese B. formosellus. The two coalescent groups differ in COI barcode sequences for at least 12 diagnostic nucleotide positions (1.8% of the barcode region). These nucleotide differences are all synonymous, making no difference to the amino acid sequences at translation.

Queens of this species have not previously been described. However, S. Lu located a female (ML503) in the TFRI collection that appears to be large enough (body length 20 mm) and collected early enough in the year (July 14, by I. Sung) to be a queen. This individual has lost much of its hair so the colour pattern is not clear, but females appear to show weak size-dependent dimorphism in the colour pattern of the hair: the queen has the remaining hair of T2 extensively black but with white hair narrowly anteriorly and medially and with orange hair narrowly posteriorly, especially in the lateral corners ( Fig. 98 View Figs 64–102 ); whereas workers (which are smaller) either have T2 chocolate-coloured anteriorly and black posteriorly or have T2 extensively dull yellow ( Figs 99–101 View Figs 64–102 ). Recently queens of this species have been reared in laboratory colonies, from which this colour pattern is confirmed (I. Sung in litt.). Males have the thoracic bands and T1–2 yellow ( Fig. 102 View Figs 64–102 ).

Queens medium-sized body length 20 mm, workers 10–15 mm. Can be distinguished within Taiwan by the hair of the thoracic dorsum with white bands (cf. B. eximius).

Body length 13–14 mm. Can be distinguished within Taiwan by their combination of the hair of the thoracic dorsum with yellow bands, side of the thorax yellow, and T3–7 red. Genitalia ( Fig. 192 View Figs 190‒198 ) with the gonostylus much reduced, less than a quarter as long on its outer side as broad, with the distal edge concave and the inner distal corner with two indistinct adjacent teeth, the proximal tooth slightly shorter than the distal tooth and the two not clearly separated by an indentation (emargination) ( cf. pyrosoma s. str.); volsella with the inner distal corner produced as a narrow curved hook ( cf. rufipes -group, B. simillimus, lapidarius -group, sichelii -group, keriensis -group); eye unenlarged relative to female eye.

Expected to be food-plant generalists. Male mate-searching behaviour is expected to resemble the patrolling of B. eurythorax. 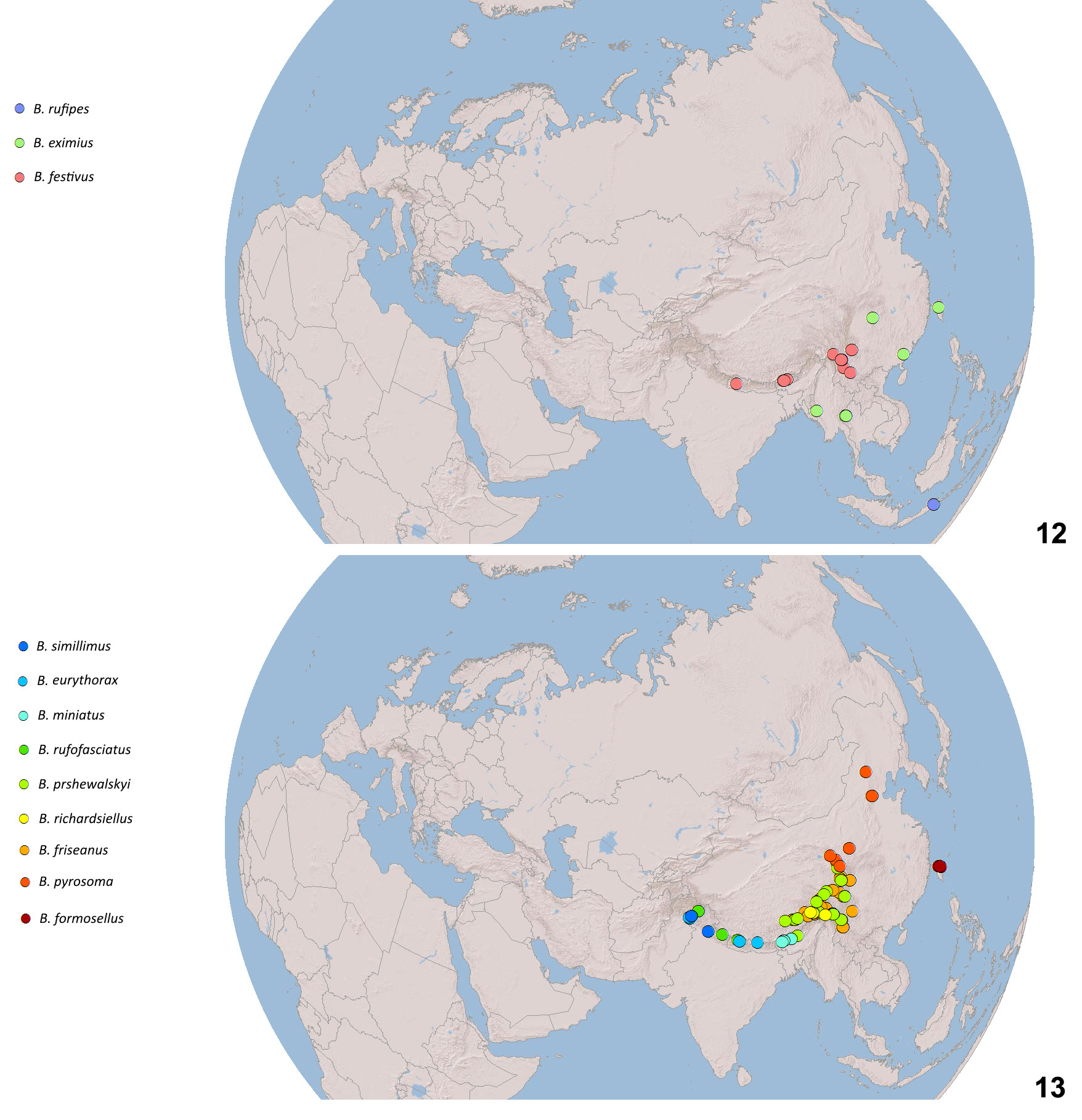 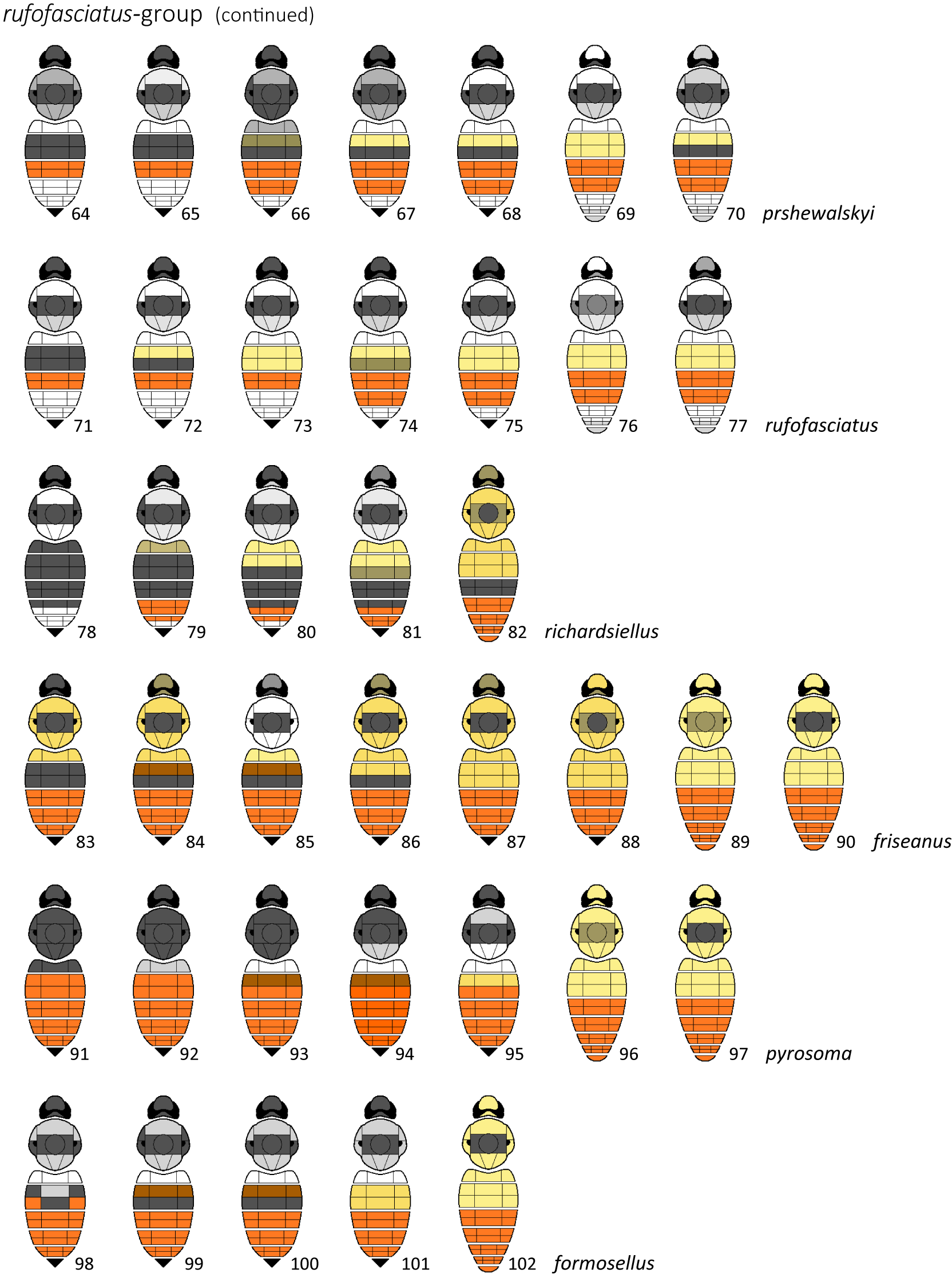 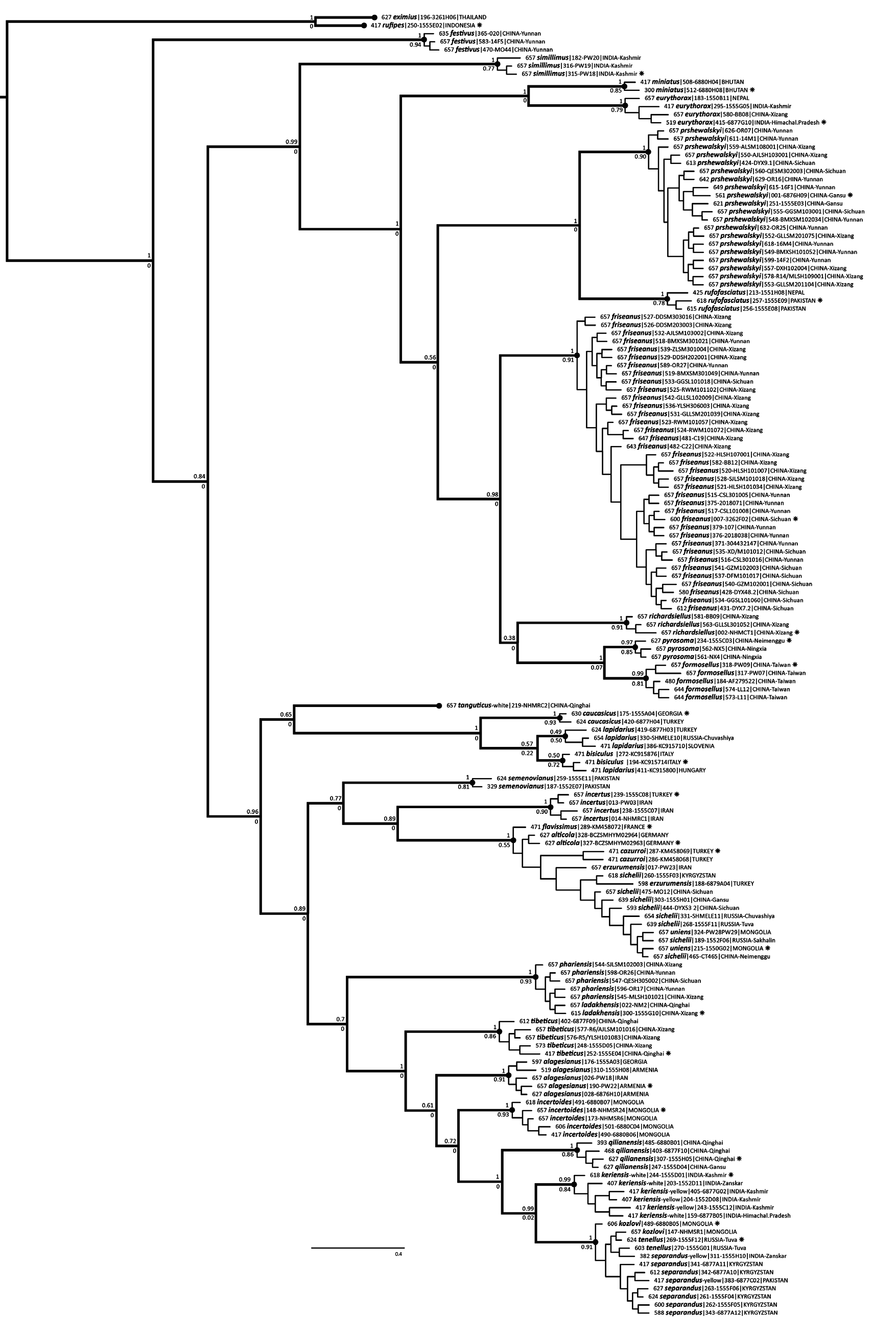