based on an unknown number of female type specimens but holotype and paratypes are distinguished in introduction. Collected in January 1956 by R. Paulian.

Similar to C. insuetus and related species in habitus by being small, elongate, and subparalell, but C. befasicus is distinguished from C. insuetus and from all other Malagasy Copelatus species by the presence of only five elytral striae, and without submarginal striae. In addition, the first stria is shortened, present only in the posterior third ( Fig. 10D View Figure 10 ).

Body length 4.1-4.2 mm. Body shape elongate and subparallel, dorsal surface reddish brown with a lighter elytral base. Head and pronotum uniformly rufus brown. Head, pronotum and elytra with dense punctation. Elytra and pronotum covered with dense punctures and the whole dorsal surface with a microsculpture. Lateral sides of pronotum striolate with the widest striolate area in the posterior corners. Elytra light brown with a distinct testaceous band basally ( Fig. 10D View Figure 10 ). First elytral stria shortened and present only in posterior third. Second to fifth elytral stria starting more or less at base and all striae approaching the apex of elytron, but the second and fourth a little shorter. Submarginal striae absent. Appendages testaceous.

Known only from two localities in the western part of Madagascar, the deciduous forest south of Befasy, Morondava, and at one locality between Morafenobe and Beravina village ( Fig. 12D View Figure 12 ).

Paulian collected the species in 1956 in the western dry deciduous forest south of Befasy, Morondava. We rediscovered the species in 2009, when we found one female specimen of C. befasicus also in the western part but a bit further north than the type locality, along the road between Morafenobe and Beravina village at an altitude of 290 m. This locality consisted of dry savannah with mixed wood and grassland ecosystem after deforestation. The habitat consisted of muddy/sandy residual pools with some dead leaves in a temporary stream after the rainy season. The dry deciduous forest ecosystem in western Madagascar has suffered immensely from deforestation and very little of this habitat remains ( Ganzhorn et al. 2001; Whitehurst et al. 2009). The species is rare and likely threatened due to the disappearance of western deciduous forests in Madagascar. That all four known specimens are females may suggest an uneven sex ratio as a test of equal sex ratio is marginally non-significant (p = 0.0625) if considered randomly picked from the population.

This is the only species in the Copelatus longicornis group from Madagascar. The longicornis species group currently contains 38 species distributed mainly in the Neotropical and Afrotropical regions but also with few species present in Japan, New Guinea, and Fiji Islands ( Nilsson and Hájek 2018). The group as currently defined is certainly artificial from a phylogenetic perspective and the only character they have in common is the low number of elytral striae. 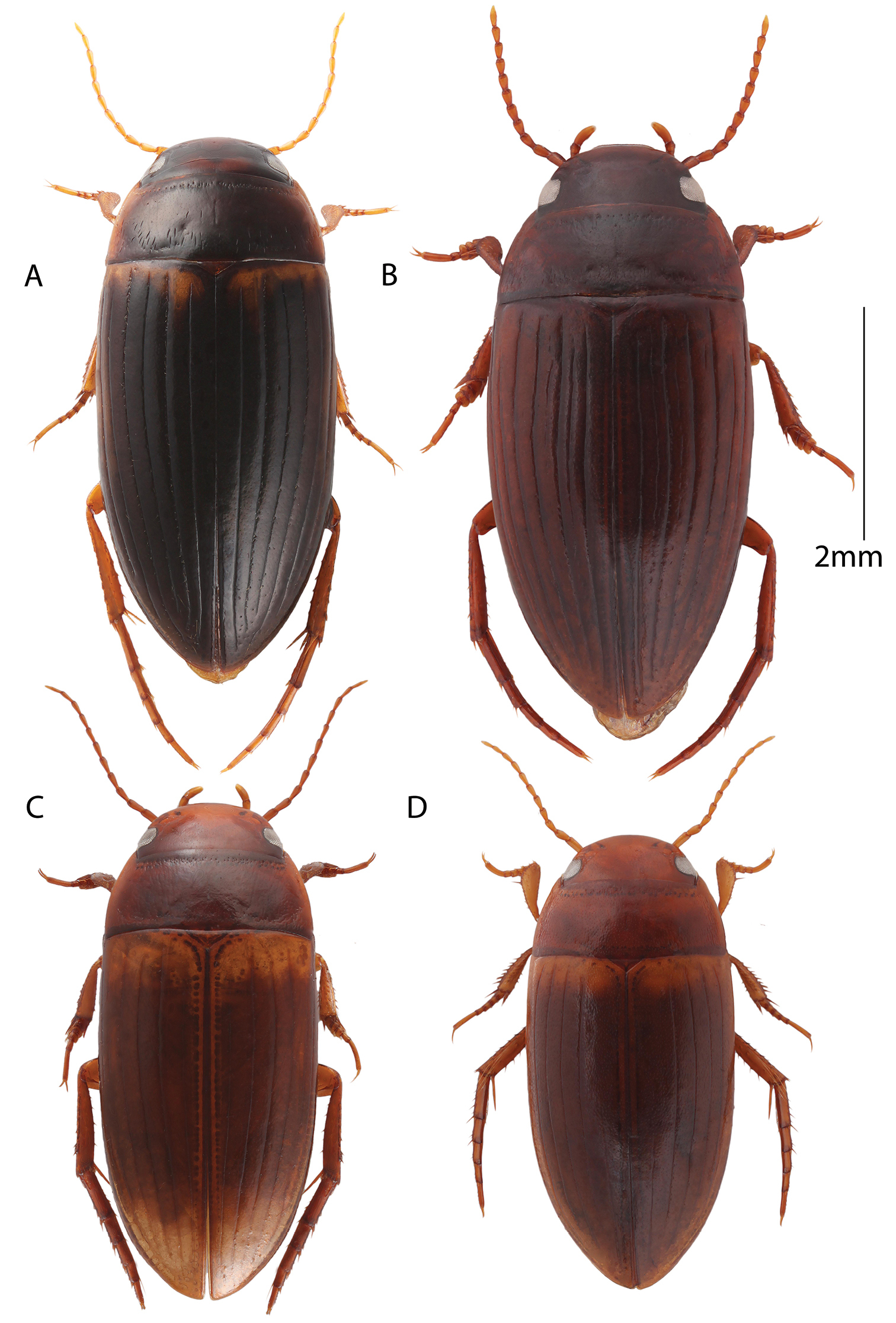 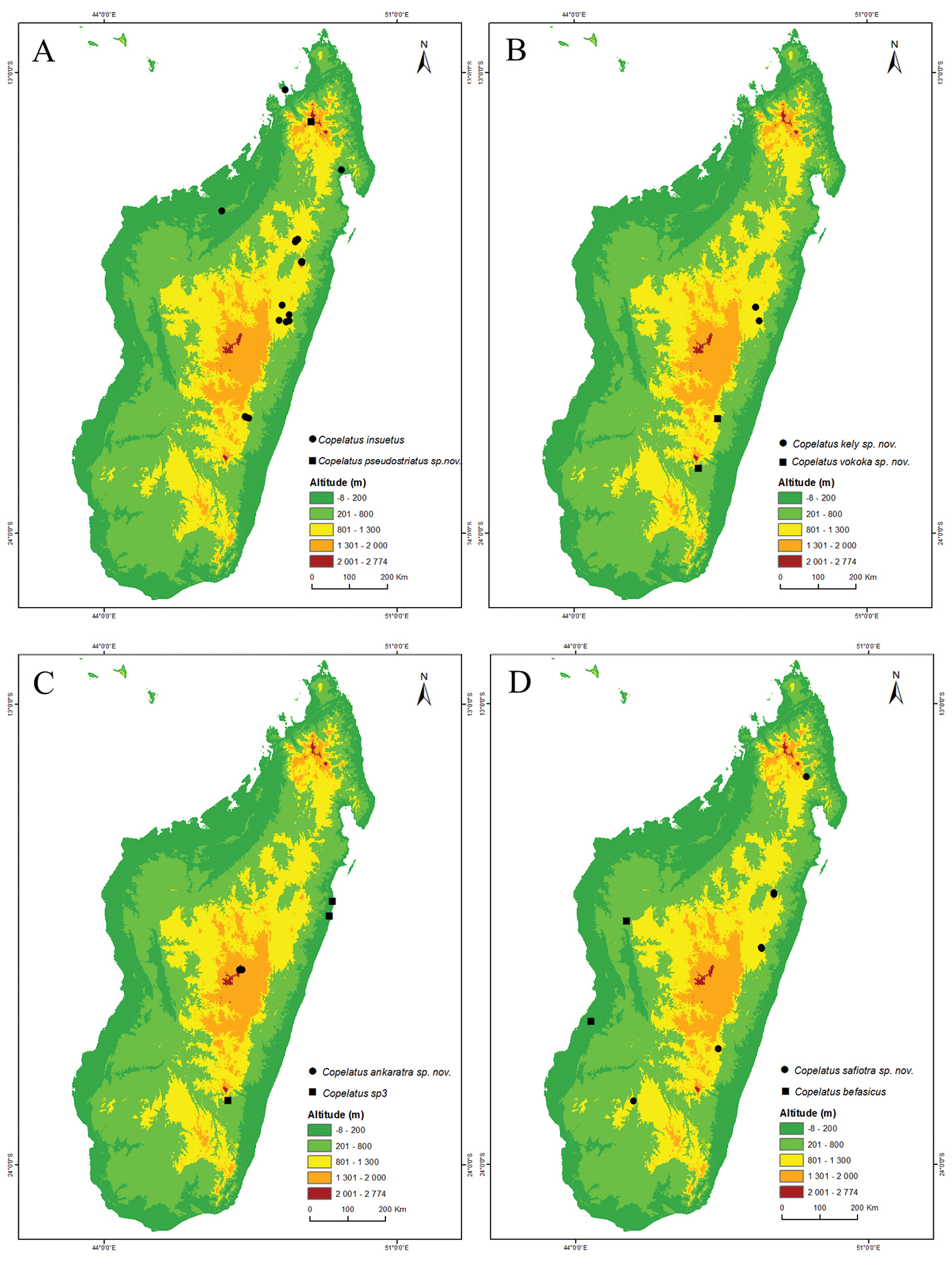