Specimens sequenced. Sequence data for NADH2 were generated for the holotype, both paratypes, and five additional specimens of D. lamillai   sp. nov. Information on sex, type status, collection number (GCD), and accession numbers for museum and GenBank of each of the specimens is provided in Table 1 View TABLE 1 .

Upper jaw more arched in males than in female paratype; in both sexes, lower jaw convex and indented at symphysis ( Fig. 8 View FIGURE 8 C–D). Teeth uni-cuspid, with sub-circular bases, arranged in longitudinal rows in both sexes; cusps of medial teeth long, sub-conical, bluntly pointed, posteriorly and lingually directed in both upper and lower jaws; cusps of lateral teeth oblique and almost flat; cusps of males longer and narrower than in females.

Tail relatively short, length from rear of cloaca to tip 0.6 (0.6; 0.5) times distance from tip of snout to rear of cloaca. Tail narrows posteriorly ( Fig. 9 View FIGURE 9 A–B), width at pelvic fin axils 1.6 (1.4; 1.4) times width at mid-length, 1.6 (1.7; 1.6) times width at first dorsal fin origin, width 1.7 (1.7; 1.7) times height at insertion of pelvic fin, 2.8 (2.3; 2.8) times height at mid-length, 2.8 (2.6; 2.6) times height at first dorsal fin origin. Tail in males oval at base, more flattened dorsally, more depressed and ventrally flattened at mid-length and triangular with flattened base at interdorsal space; in females oval and more equally convex dorsally and ventrally at the base, less expanded at midlength and triangular at inter-dorsal space. Lateral tail fold narrow, relatively long-based, similar in males and females; originating as a low membranous ridge beside or slightly behind pelvic fin, terminating at tail tip, not obviously broader at any point along its length, maximum width about half height of caudal fin in holotype and about as wide as caudal fin height in female paratype.

Dermal denticles of males poorly developed and scarce. In male holotype, small denticles on tip of the snout and over rostral cartilages, 2 small patches in front of orbits, and 1 in front and 1 behind spiracles; dense, narrow band along antero-lateral margin of disc, merging anteriorly to malar thorns, reaching to about half of anterior margin of pectoral fin; maximum width about one-fourth orbit diameter; no denticles on remainder of disc or tail; narrow band of fine denticles on anterior margin of dorsal fins and broadly spaced caudal fin. Ventrally, denticles over most of head, more densely distributed over rostral cartilage and along disc margin to level of about first gill slits. Dermal denticles of female paratype covering most of dorsal surface from snout tip to nuchal thorn, medialdorsal area and on anterior and upper margins of dorsal and caudal fins; ventrally, dermal denticles cover most of ventral surface of the head including gill openings, sparse over abdomen, slightly dense patch surrounding cloaca; tail lacking dermal denticles.

Distribution. Species known from the slopes of the southwestern Atlantic Ocean adjacent to the Falkland Islands.

Etymology. This species is named in memory of Julio Lamilla, a Chilean biologist who devoted his life to teaching and research focused on the biology and conservation of chondrichthyans, especially batoids. The proposed common name is Warrah skate, or Raya guará, in reference to the extinct Falkland Islands Wolf, the Warrah ( Dusicyon australis   [Kerr 1792]).

D. lamillai   sp. nov. also differs from D. brevicaudatus   n. comb. from the coast of Buenos Aires, Argentina. Based on the original description by Marini (1933), the two species differ in coloration. Whereas the dorsal surface of the disc of D. lamillai   sp. nov. is medium brownish with multiple lighter spots and reticulations, that of D. brevicaudatus   n. comb. was originally described as uniform brownish, although it was subsequently redescribed (under the name Zearaja brevicaudata   ) as grayish by Gabbanelli et al. (2018). However, morphometric comparisons are difficult to make between D. lamillai   sp. nov. and the recently resurrected D. brevicaudatus   n. comb. as redescribed by Gabbanelli et al. (2018). This is largely because the measurements presented by these authors are combined for juvenile, subadult, and adult specimens of both sexes, and thus do not allow for comparisons of specimens of the same size or same sex of both species. In addition, although measurements are presented for the holotype specimen, that specimen is a juvenile female (32.4 cm in TL) and those measurements are not comparable to those for the holotype of D. lamillai   sp. nov., which is an adult male.

The Neighbor-Joining tree resulting from analysis of NADH2 data is shown in Figure 13 View FIGURE 13 . Our eight specimens of D. lamillai   sp. nov. from the Falkland Islands were found to cluster together away from the cluster composed of our three specimens of D. nasutus   from New Zealand and the cluster composed of our 11 specimens of D. chilensis   from Chile. GenBank specimen No. KJ913073 View Materials , collected from Chile by Vargas-Caro et al. (2016a), was found to nest among the latter specimens. However, GenBank specimen No. KF748508 View Materials , collected from raw fillets at a skate restaurant in Seoul, Korea ( Jeong & Lee 2016), was found to nest among our specimens of D. lamillai   sp. nov. 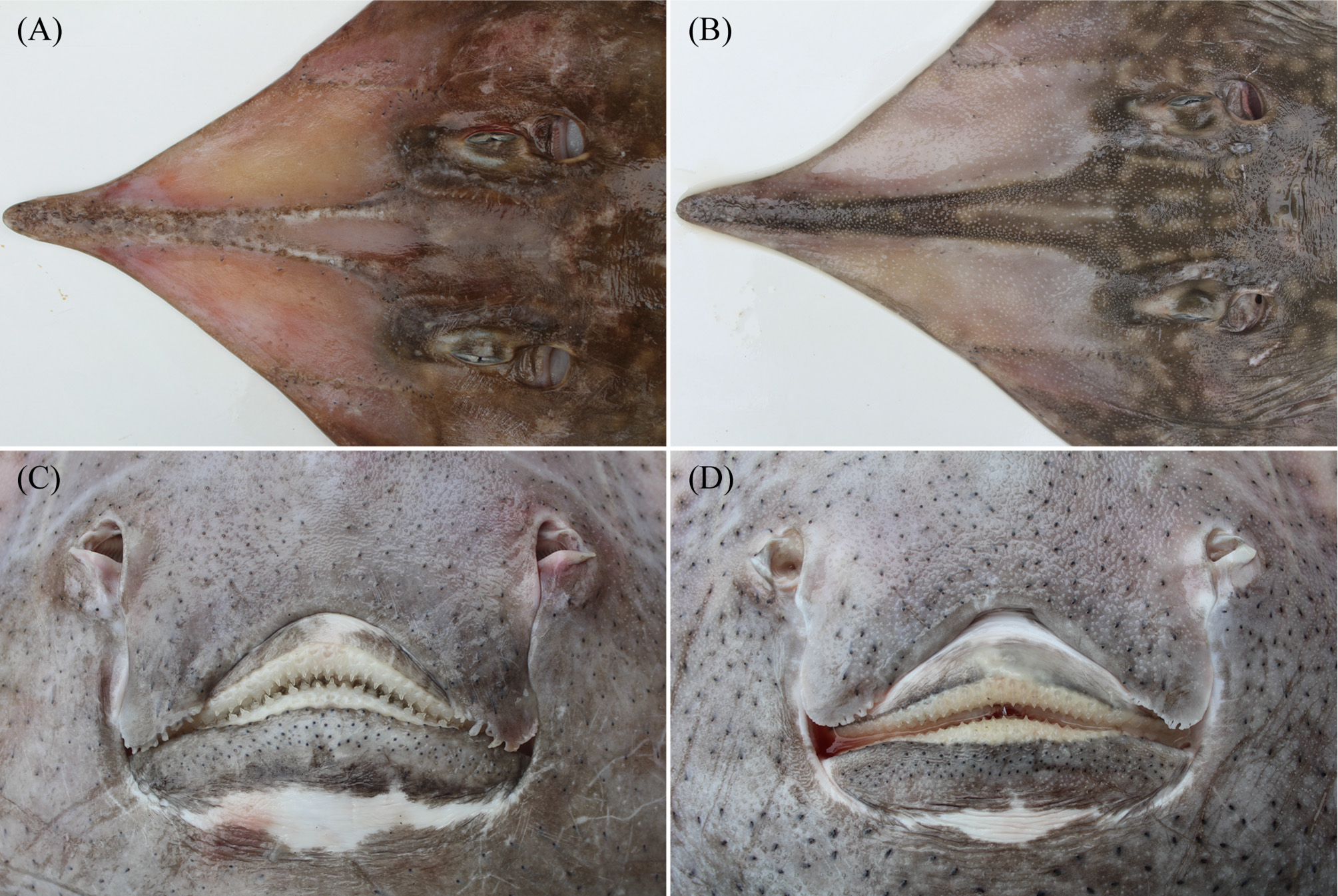 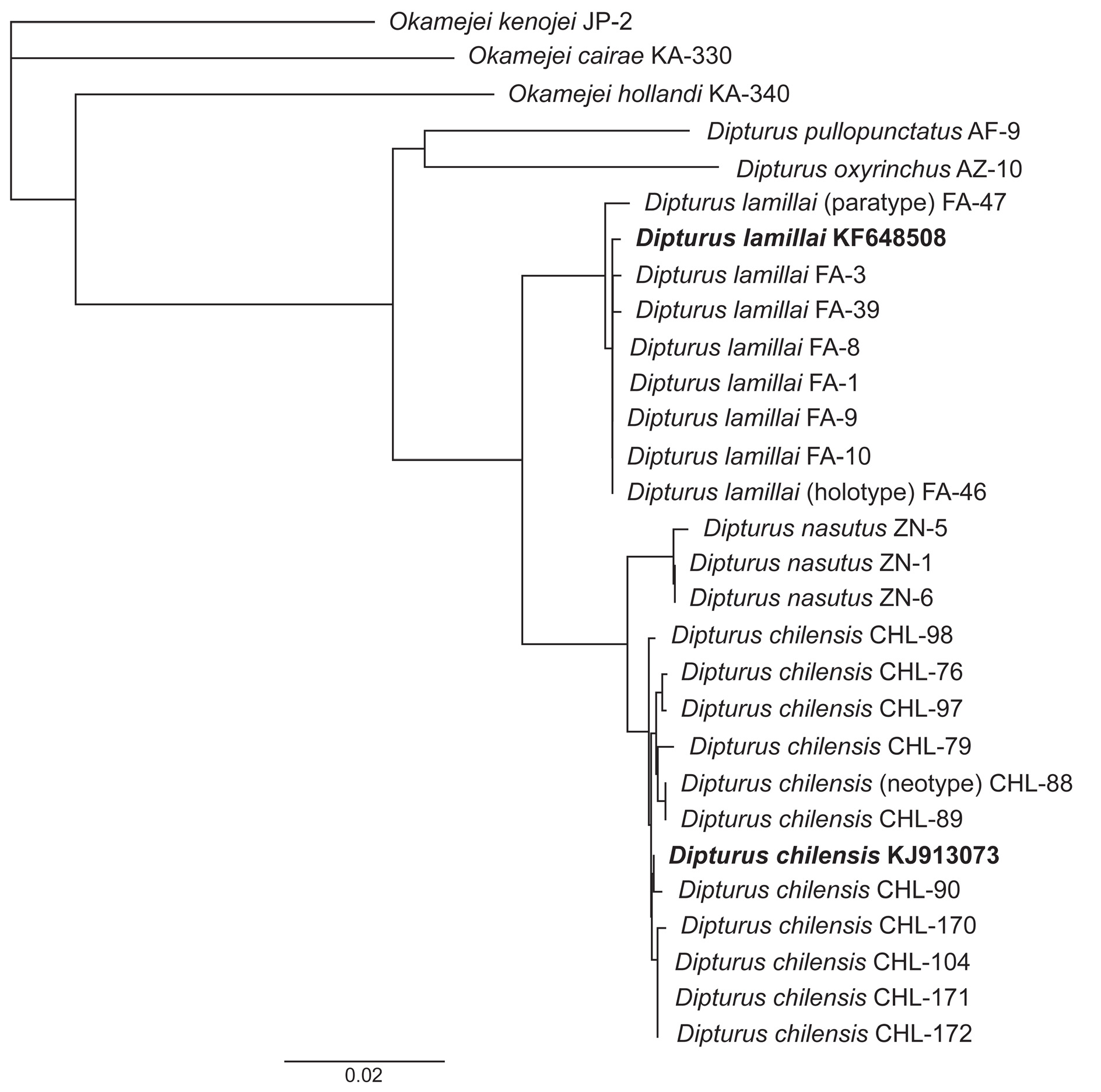 FIGURE 13. Neighbor-Joining tree generated with Jukes-Cantor genetic distance model of sequence data for 1,043 base pairs of the NADH2 gene. Sequences obtained from GenBank are shown in bold.