Description. Colony fan-shaped, variable in size, 0.7–2.5 cm long by 0.7–2.4 cm wide, delicate and with large fenestrulae ( Fig. 3AView FIGURE 3). Autozooids arranged alternately in series of two, longer than wide ( Figs 3BView FIGURE 3, 4CView FIGURE4), delimited by deep sutures that disappear with secondary calcification, frontal surface smooth with 4–7 small, rounded areolar pores ( Figs 3BView FIGURE 3, 4CView FIGURE4). Primary orifice hidden by peristome, semicircular, as long as wide with a pair of small triangular condyles at the proximal corners ( Fig. 3DView FIGURE 3); anter denticulate, denticles sometimes partially hidden by the outer rim, more developed than in other species of the genus ( Figs 3DView FIGURE 3, 4A –BView FIGURE4). This, together with the development of the peristome, makes the denticulation challenging to see from outside ( Fig. 3DView FIGURE 3). The difficulty of observing the denticulation inside the orifice is apparent in both the present material and in that from the north-western Mediterranean. One pair of delicate peristomial spines frequently broken off; circular pseudospiramen located near the peristomial edge, located medially when a peristomial avicularium is absent and displaced laterally if the avicularium is present ( Fig. 3B –CView FIGURE 3). Four kinds of avicularia present: (1) suboral avicularium, large, with a robust and hooked rostrum, almost perpendicularly raised from the surface, with a complete crossbar ( Figs 3B –CView FIGURE 3, 4CView FIGURE4); (2) frontal avicularium, single or paired, often located along the margins of the autozooids, proximally directed, either outwards or medially, shoe-shaped with rounded rostrum, complete crossbar and palatal foramen approximately half the length of the rostrum, border sometimes slightly raised ( Figs 3BView FIGURE 3, 4CView FIGURE4); (3) large dorsal avicularium at the proximal border of most of the fenestrulae ( Fig. 4DView FIGURE4), elongate and laterally directed, with a slender spatulate rostrum, slightly hooked at its end, and palatal foramen half the length of the rostrum; (4) small, dorsal, oval avicularium similar in shape and size to the frontal ones but randomly directed, usually located near the edge ( Fig. 4DView FIGURE4). Ooecium hyperstomial, slightly longer than wide, proximal border almost straight, without labellum; a long fissure along most of the midline ( Figs 3B –CView FIGURE 3, 4DView FIGURE4). Dorsal side with conspicuous sutures and small pseudopores, usually located near the sutures and around the avicularia ( Fig. 4DView FIGURE4).

Remarks. This species is easily distinguished by the large dorsal avicularia, elongate and disposed almost perpendicular to the growth axis of the colony, and by the large and hooked suboral avicularium. The most similar species, Reteporella grimaldii ( Jullien, 1903)  is characterized by three types of frontal avicularia: (1) 1–2 oval avicularia on each zooid (frequent); (2) triangular avicularia with an acute rostrum (rare); (3) large, robust and triangular avicularia with a hooked rostrum, not associated with the peristome. Furthermore, R. grimaldii  differs in having elongate, triangular dorsal avicularia with a hooked rostrum. Reteporella pelecanus  , described by López de la Cuadra & García-Gómez (2001) from the Mediterranean, has a longer ooecium (250 µm long) and longer suboral avicularia (160 µm long) than the specimens from Cádiz. However, the size of the zooids (550 µm long by 230 µm wide), small and rounded avicularia (90 µm long), and dorsal avicularia (400 µm long) is similar. The frontal avicularia in our material are frequently placed more laterally than centrally, compared to the original description, but this may be considered as an intraspecific variation. Reteporella pelecanus  was originally recorded near the Balearic Islands (Mediterranean Sea) at 80–120 m depth (López de la Cuadra & García-Gómez 2001), and the difference in size could be influenced by abiotic factors, mainly temperature and depth. Thus, we conclude that these differences are not enough to erect a new species, and the specimens here described are assigned to R. pelecanus  .

The presence of R. pelecanus  at three MVs (Gazul, Tarsis, and Pipoca) of the shallow field of the fluid expulsion of the Gulf of Cádiz represents the first record of this species in the Atlantic, at a considerable higher depth than the previously published records (López de la Cuadra & García-Gómez 2001). 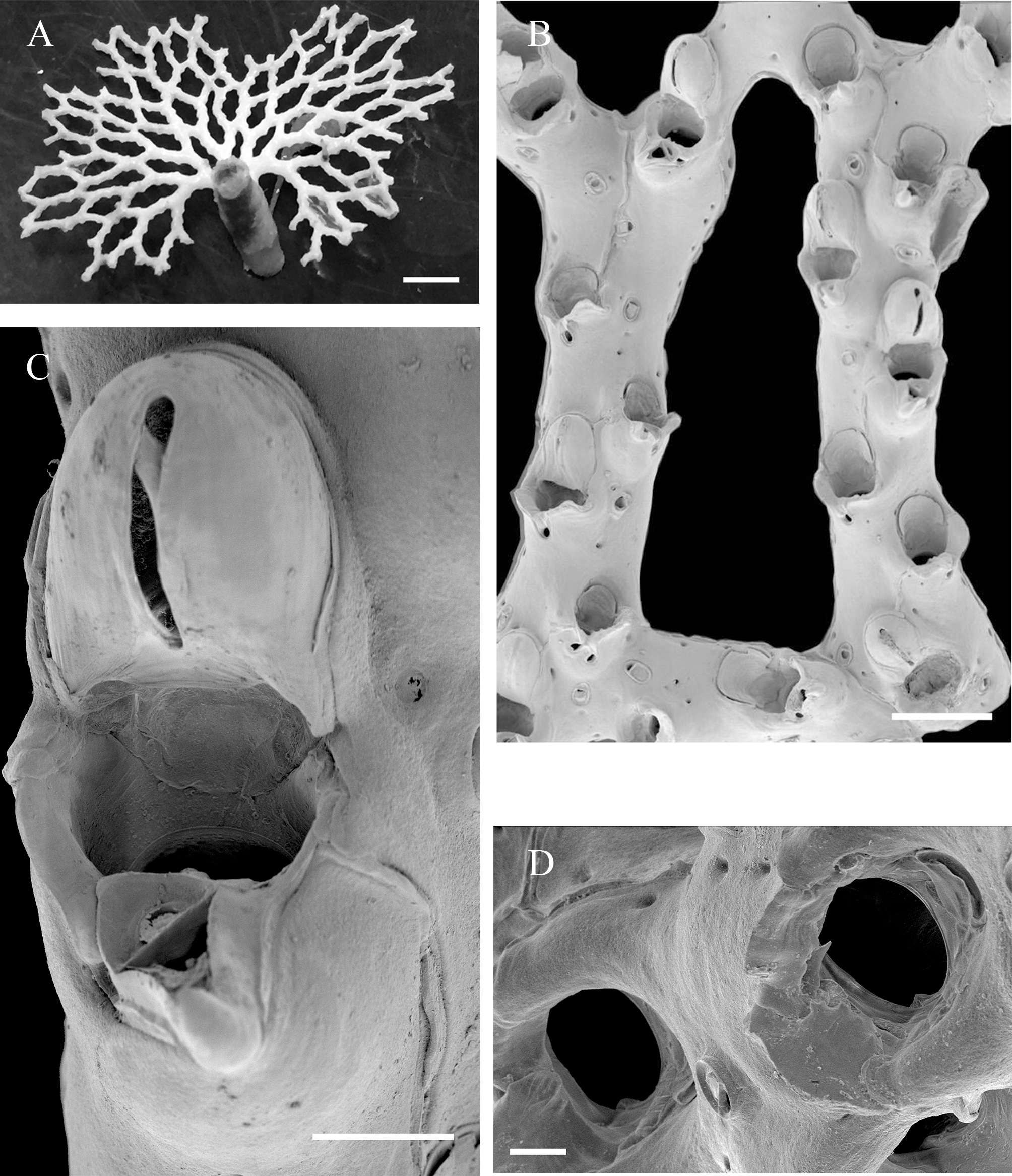 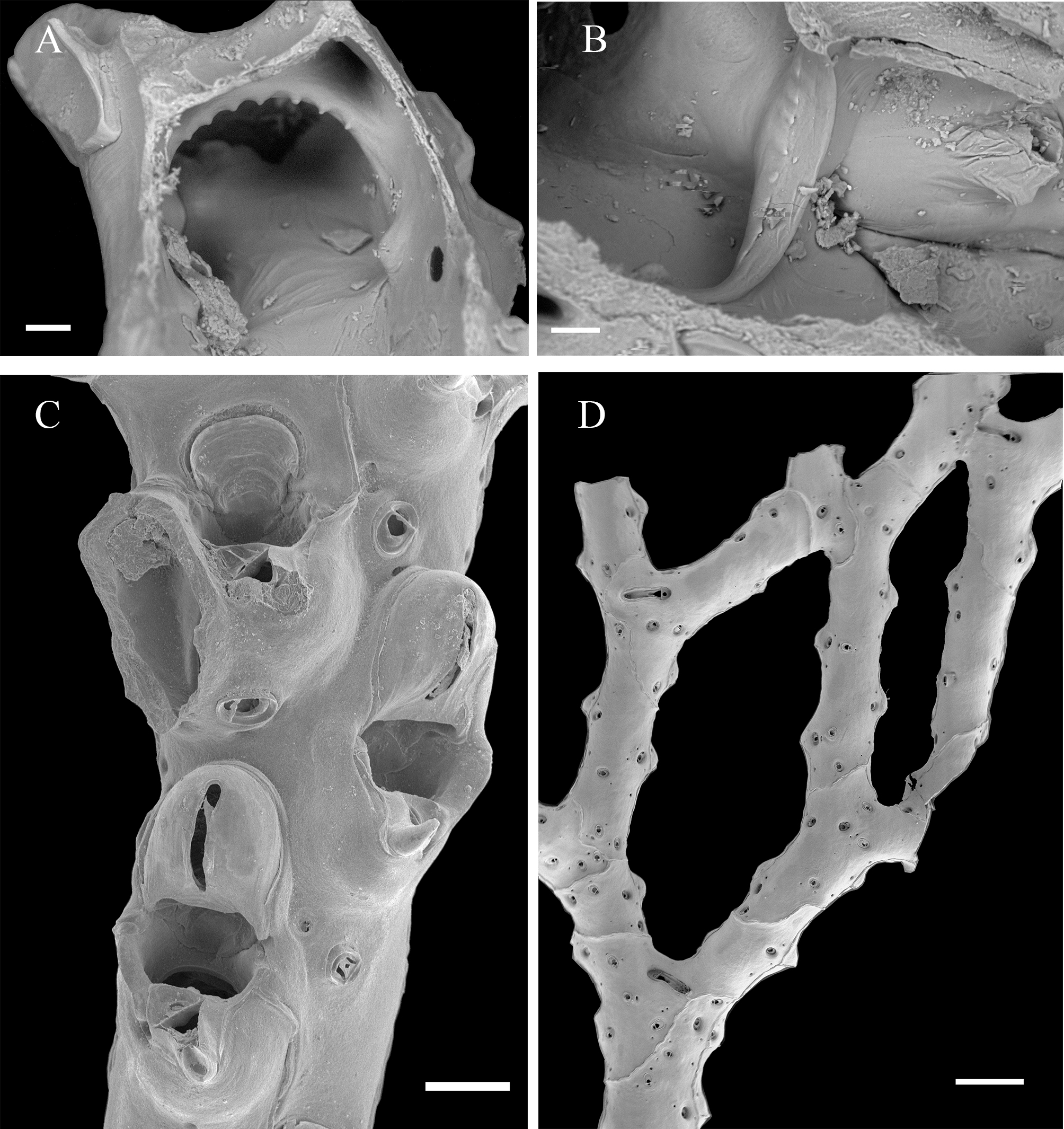