Etymology. The species name is in reference to the noun “to ‘raro,” which in the Apurinã language means “frog.” This indigenous Amazonian tribe occupies the center of the range of the new species. The specific epithet is used as a noun in apposition.

Dorsal body and head black with complete yellow middorsal and dorsolateral stripes, extending from vent to rostrum and extending from upper surface of thighs to orbits, respectively. Limbs and venter black with pale to bright blue reticulation forming round black spots on limbs and irregular spots on venter. Chin yellow with large black paired gular spots and a central spot, irregular in some individuals. Tadpole gray, ovoid, with irregular yellow markings present from early in development.

Ranitomeya toraro   can be distinguished from all other dendrobatids by its distinctive color pattern. Other species with which it could be confused include R. amazonica   , R. defleri   , R. flavovittata   , R. sirensis   (and its junior synonyms R. biolat   and R. lamasi   ), R. uakarii   and R. ventrimaculata   (including its junior synonym R. duellmani   ). Ranitomeya defleri   and R. flavovittata   have highly variable dorsal markings consisting of yellow dots and elongated spots on a black ground color (versus complete middorsal and dorsolateral stripes in R. toraro   ); further, R. defleri   has characteristic large yellow blotches behind the eyes. Ranitomeya flavovittata   typically has a pale conspicuous yellow spot on the upper surface of each thigh (versus absent in R. toraro   ).

Some populations of Ranitomeya sirensis   have complete, broad, yellow middorsal and dorsolateral stripes. Because of these characters, these morphs are similar in appearance to Ranitomeya toraro   ; however, in R. toraro   the stripes are thinner and the middorsal stripe widens anteriorly, becoming at least two times wider on the head (versus equal width in R. sirensis   ). Almost all individuals of R. sirensis   possess a large spot that is the same color as the stripe coloration (typically yellow) in the center of the venter (versus spot absent in R. toraro   ). Ranitomeya variabilis   and R. amazonica   are fairly variable species, but the morphs most similar to R. toraro   have a yellow dorsum with a conspicuous black ‘Y’ that extends from the rump to the eyelids (versus the appearance of two black stripes due to complete medial stripe that extends to vent in R. toraro   ).

The striping pattern among these 14 specimens was remarkably consistent with only minor deviations. Five of the 14 individuals had a slight break in the middorsal stripe; one of these specimens had three breaks and a horizontal stripe connecting the middorsal and left dorsolateral stripe. Only one specimen had a break in either dorsolateral stripe. Specimens from the Autazes locality (n = 10) differed slightly from the Ituxi specimens (n = 4). Those from the Ituxi locality had breaks in the bifurcation of the middorsal stripe, two with breaks on both sides, and two others with breaks only on the left side. No Autazes specimens had breaks in the bifurcation of the middorsal stripe. The dorsolateral stripes in the Autazes specimens were complete (extended below eye to side of body) in two specimens, including the holotype, broken below the eye on both sides in five specimens, and on one side only in three specimens. All Ituxi specimens had breaks below the eye on both sides. Also see variation in Figs. 10 View FIGURE 10 (c-m) and 11 (a-g, k).

Color in life. Ituxi specimens: ground color of dorsum black with three longitudinal stripes; dorsolateral stripes are iridescent yellow; middorsal stripe light yellow or light blue on back, becoming deep yellow on head. Middorsal stripe bifurcates on head (incomplete in some specimens) and extends anterior to eye not fusing with labial stripe, dorsolateral stripe extends above the center of the eye (in some speciments posterior to eye) to groin, ventrolateral stipe near axilia is light blue or greenish blue, then yellow in groin. Stripe expands on proximal upper arm to form a triangular light yellow spot. Small yellow rostral spot on tip of snout. Arms, legs and ventral surfaces with blue reticulate pattern on black ground color, forming large black round or elongate spots. Iris black. Specimens from Autazes similar, although some specimens have a light yellow reticulate pattern on the legs and venter.

Color in preservative. Dorsum dark gray with three whitish but distinct longitudinal stripes on body and head. Middorsal stripe bifurcates on head anterior to eye and extends below eye alongside to groin. Large central whitish spot on tip of snout. Reticulate pattern distinct, in shades of gray, on upper limbs, sides and all ventral surfaces except chin. Chin with central irregular whitish spot that connects to reticulate pattern on chest.

Tadpole. Five back-riding tadpoles were available for description. Three were taken from OMNH 36667 on 13 February and two were taken from MPEG 13037 on 26 March. Both nurse frogs were males and taken from the same locality; therefore, the five tadpoles are described together. All measurements (mm) are means ± SE (range in parentheses).

Oral disc ventral, emarginate; transverse width 0.9 ± 0.02 (0.8–0.9), 36% of body width. Single row of small papillae present laterally and ventrally; dorsal gap where papillae absent. The three tadpoles from OMNH 36667 have only A-1 developed on upper labium; P-1 on lower labium with narrow medial gap; P-2 short. The two tadpoles from MPEG 13037 have A-2 developed in addition to A-1. A-2 composed of two small segments with a large medial gap. LTRF for latter two tadpoles 2(2)/2(1), additional posterior row may develop in older tadpoles.

Distribution and natural history. Ranitomeya toraro   occurs in southwestern Brazil and the southeastern tip of Colombia, where it is known from 12 localities ( Fig. 13 View FIGURE 13 ; genetic data are from three localities). This species has been observed in the Brazilian states of Amazonas, Acre and Rondônia and the Colombian department of Amazonas. It likely occurs widely throughout the Madeira, upper Juruá and upper Purus river drainages, although further sampling is needed to determine the extent of its distribution.

Individuals from all localities have been found in undisturbed “terra firme” primary forest or old-growth secondary forest in Amazonia. These forests are not subject to flooding during the rainy season. At three localities (Boca do Acre, Autazes, Ituxi), undisturbed forests were characterized by large rainforest trees, such as Brazil nut trees ( Bertholletia excelsa   ). Canopy height varied from 20 to 35 meters. The understory was open to relatively dense.

These frogs were relatively uncommon at all sites surveyed. At the Rio Ituxi site, only five frogs were observed in two months of fieldwork. Eleven individuals were found in 24 days at the Autazes site, and nine individuals were found in six days at the Boca do Acre site. At the Rio Ituxi site, frogs were found only in terra firme forest, even though extensive work was done in flooded forests along the river. Of the five frogs observed, two were in leaf litter and three were an average of 35 cm above ground on a leaf, a fallen branch and a log. At the Autazes site, two frogs were found in undisturbed primary forest and nine were found in old second-growth forest. Three were in leaf litter and eight were above ground (average, 80 cm) on leaves (two), logs (three), Heliconia   leaves (two) and a dead palm frond (one).

To date, tadpole development sites have been found only at the Boca do Acre site. Forests at the Autazes and Ituxi sites had relatively few obvious types of phytotelmata that could serve as tadpole habitats, although Heliconia   stands were present at the Autazes site. Four frogs found transporting tadpoles on their backs had one, two, three and three tadpoles, suggesting that males frequently carry more than one tadpole at a time. Two egg clutches were found at the Boca do Acre site, one with two eggs 5 cm about the waterline of a bromeliad, Aechmea cf. bromeliifolia   and another with a single egg in the axil of the bananeira-brava plant ( Strelitziaceae   : Phenakospermum guyanense   ). Five tadpoles were found in bromeliad tanks and 20 were found in axils of P. guyanense   ; these tadpoles were always found occurring in separate tanks or axils, indicating that cannibalism may occur.

Conservation status. Following the IUCN Red List categories and criteria ( IUCN 2010), we tentatively suggest listing this species as Least Concern (LC). The total geographic extent of this species exceeds 800,000 km 2 and much of the forests in the Madeira, upper Juruá and upper Purus drainages remain intact. However, given dramatic deforestation rates in Brazil, significant habitat loss in the near future could endanger this species. 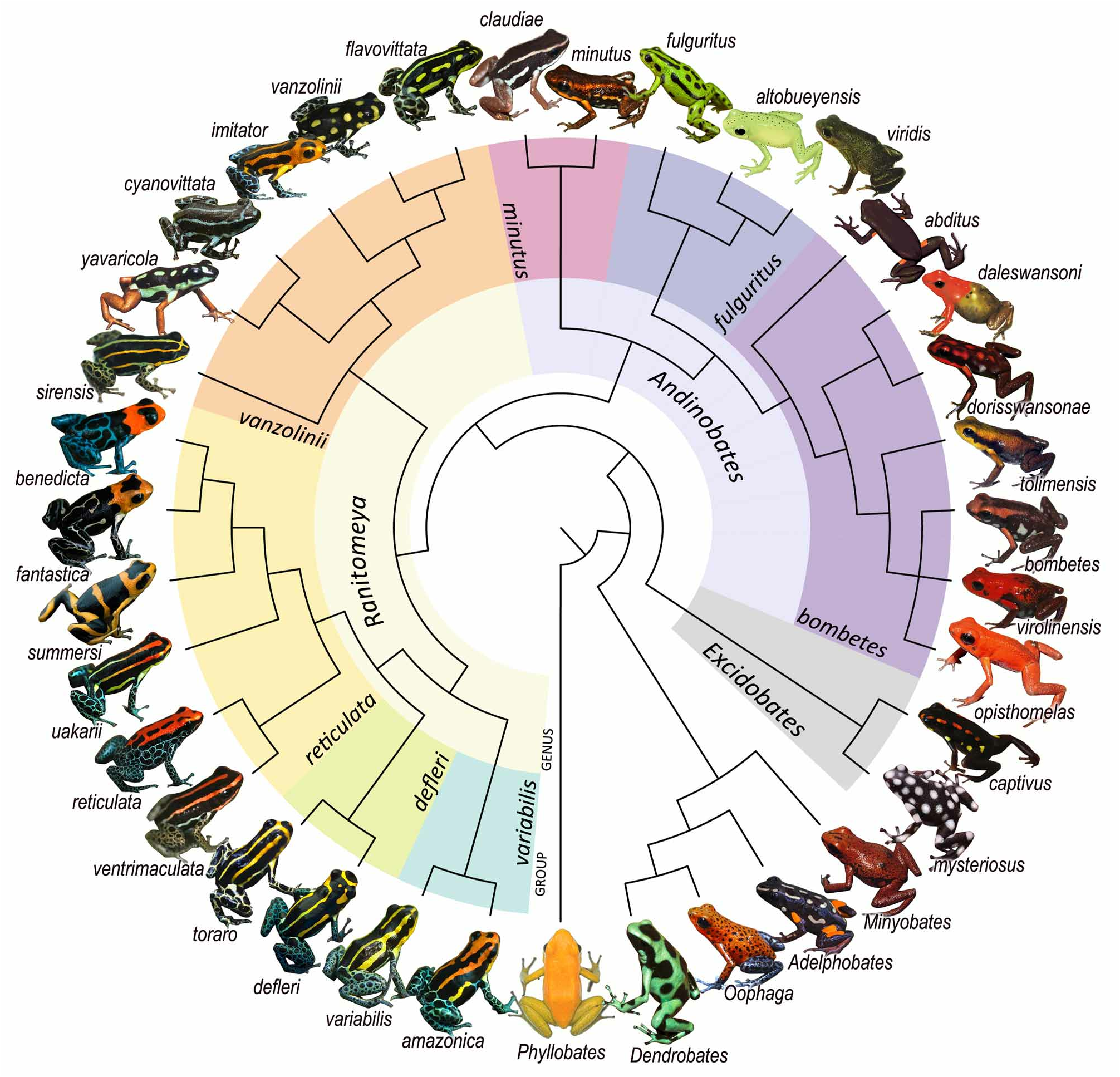 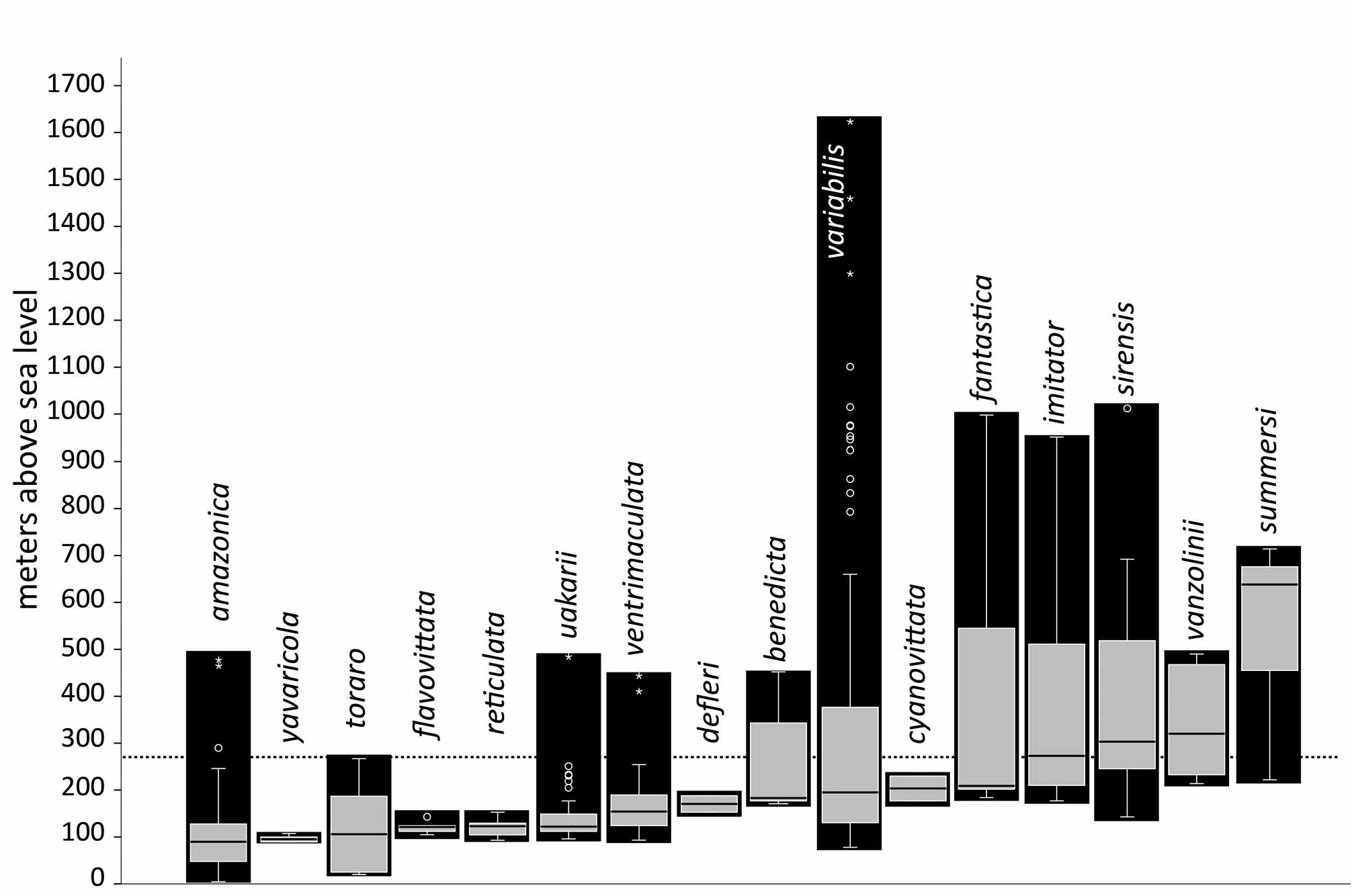 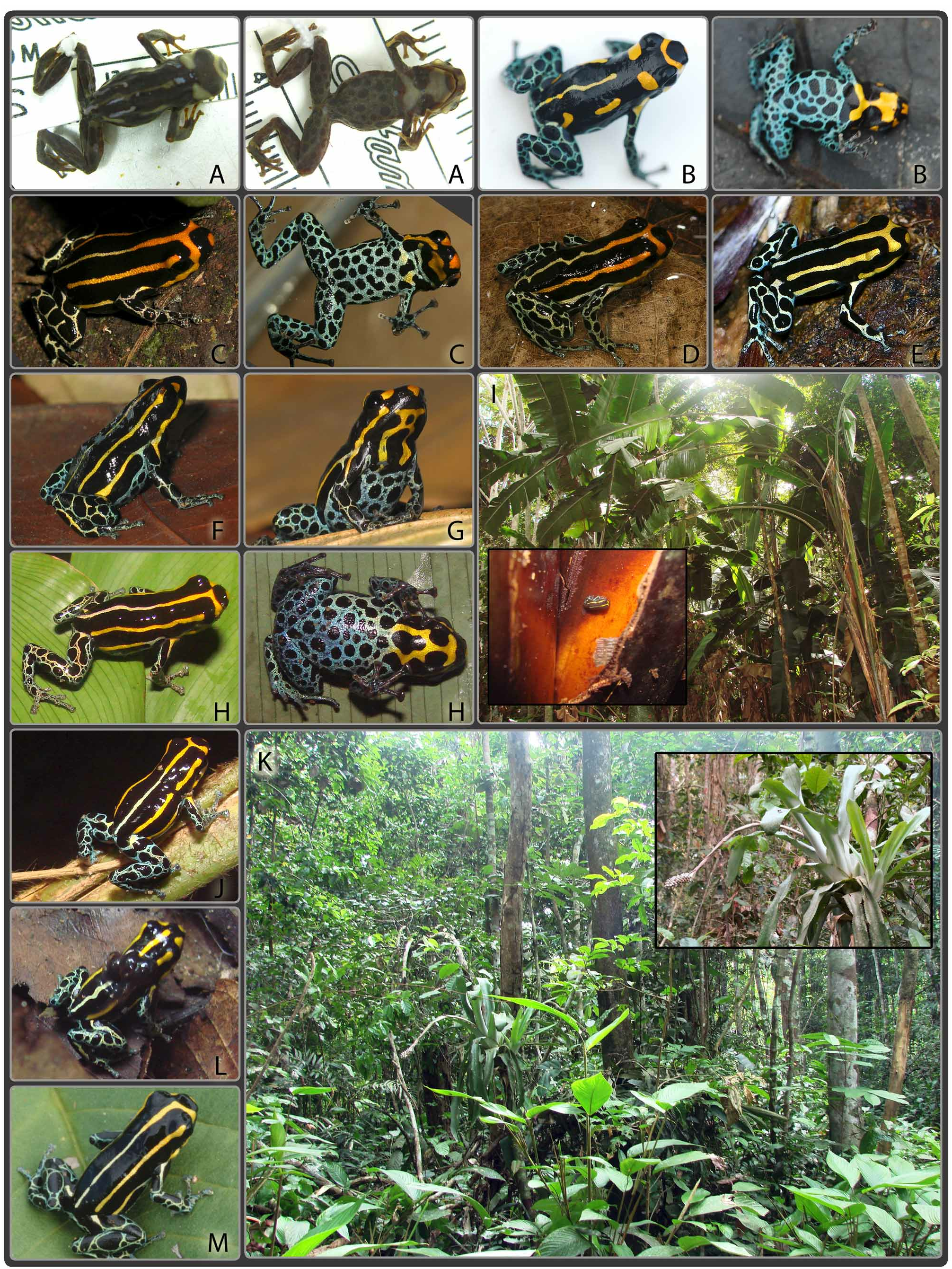