In the early 1970s, as a graduate student, Philip A. Silverstone sorted through countless jars of small Neotropical frogs with the daunting task of clarifying the taxonomy of aposematic poison dart frogs (family Dendrobatidae   ). Many of the frogs he worked with and allocated to the genus Dendrobates   are now considered to be members of the more recently erected genus Ranitomeya   , a species-rich group of poison frogs characterized by their diminutive size. The initial classifications of members of Ranitomeya   , without genetic, behavioral, or acoustic data, would have been extremely difficult. Therefore, it is easy to understand why early workers were careful and ‘lumped’ every small Amazonian specimen with pale limb reticulation under the single name Dendrobates quinquevittatus   , which was suggested to be a highly variable species that exhibited a cline of morphology (see Fig. 14 View FIGURE 14 in Silverstone 1975). Such levels of variation were certainly not unheard of in poison frogs. For example, Oophaga pumilio   , O. histrionica   , Dendrobates tinctorius   , and D. auratus   display dramatic levels of phenotypic variation over their geographic ranges— the alpha-taxonomic status of each of these species continues to be widely accepted today (e.g., Lötters et al. 2007). In 1982, Myers wrote that:

New material, as well as closer attention to morphological details and evidence of sympatry, convinces me that Dendrobates quinquevittatus Steindachner   , sensu Silverstone, is a composite of five or more species of distinctively colored frogs.

Interestingly, almost a decade later, Caldwell & Myers (1990) would point out that, in fact, none of those species was actually Dendrobates quinquevittatus   sensu stricto. They stated that:

Myers erred in concluding that the restricted quinquevittatus remained “indeed a widespread and variable species.” We correct that mistake by further restricting the name Dendrobates quinquevittatus Steindachner   to a not particularly variable species confined to the southwestern section of Amazonia and by formally resurrecting the name Dendrobates ventrimaculatus Shreve   for the residue of what recently has been called quinquevittatus. We emphasize that Dendrobates ventrimaculatus   sensu lato becomes the new composite species of this complex, but we urge caution in dealing with it systematically. We are aware that “ ventrimaculatus ” contains more than one species, some of which may be difficult to separate even when sympatric…Attempts at taxonomic diagnosis based on literature and/or terrarium specimens of vague provenance seem likely to be fruitless at best… or, more seriously, to create needless confusion arising from nomenclatural irresponsibility.

Today, 13 species are recognized that were considered by Silverstone (1975) as D. quinquevittatus   . Dendrobates quinquevittatus   is just one example of how this group has perplexed taxonomists for the last half-century, and, despite the fact that many researchers have suspected that this group was composed of many more species (e.g., Myers 1982; Caldwell & Myers 1990; Noonan & Wray 2006; Brown et al. 2006; Twomey & Brown 2009), defining species boundaries has proven to be extremely difficult. This confusion, naturally, slowed the rate at which species have been described ( Fig. 1). Furthermore, this group’s variation appeared to be limitless, with every unexplored valley or mountain seeming to contain new forms, many times muddling the distinction between previously distinct forms. Christmann (2004) lamented “From excursion to excursion, our desire to see the largest number of populations in their biotype increases. However, at the same time—with each new find, our feelings of helplessness grow. Will it ever be possible to recognize some kind of order in this multitude of species?” Myers (1982) commented “But we are gradually realizing that there always will be another poison frog to be sought on the next mountain or across the next river. So, the new names are offered in hope of encouraging others who find it interesting to pursue small frogs in obscure places.” The vital piece of the quinquevittatus   puzzle that was previously lacking was not morphological data (of which there was plenty), but acoustic, genetic and behavioral data, and firsthand experience with these species in their natural habitats throughout their entire ranges.

This last point is particularly crucial because most of the alpha-taxonomic problems in Ranitomeya   stem from the fact that many species could not be diagnosed with certainty based on coloration (or, at least, reliable characters were not apparent), and other diagnostic morphological characters (e.g., osteology) seemed to be insufficiently variable for diagnoses below the genus level. Many species show extensive variation between populations (e.g., R. imitator   , R. fantastica   , R. amazonica   ), whereas other species display only subtle differences when compared to their sister taxa (e.g., R. flavovittata   and R. vanzolinii   ).

One cause for the varying levels of intraspecific diversity in Amazonian species (and resulting taxonomic confusion), is due to at least one, and perhaps multiple, occurrences of Müllerian mimicry (see Symula et al. 2001 and the mimicry section in discussion of this paper). For example, in some localities in north-central Peru, three species have converged (at least partially) on a single phenotype (i.e., Ranitomeya imitator   , R. variabilis   sensu this paper and R. fantastica   near Pongo de Cainarachi, Department San Martin), making it easier for local predators to recognize the similarly toxic species ( Ruxton et al. 2004). On the other hand, nearby populations of the same species appear so dissimilar (having converged on the color and pattern of a different model species) that they are not easily identified as conspecific unless acoustic and genetic data are available.

This group’s taxonomic classification was further complicated by the shy nature of many species and their typically high species diversity at any given site, with two to three species usually occurring in sympatry, often appearing similar in color and pattern. Furthermore, in many species, advertisement calls can be easily overlooked, often being quiet, infrequent, and insect-like. Nevertheless, advertisement calls are important characters in the classification of the main groups within Ranitomeya   (see Table 5; Erdtmann & Amézquita 2009). In addition, the size of a species’ distribution seems to bear little significance in determining specific units, and some species appear to have extremely small ranges (e.g., R. summersi   ), whereas other species appeared to be distributed across much of the Amazon, from French Guiana to Peru (e.g., R. amazonica   and R. uakarii   ).

Recently, the use of molecular phylogenetics has elucidated many of these problems and in some instances exposed flaws in previously accepted taxonomies (see for example the species accounts of R. ventrimaculata   , R. variabilis   , R. sirensis   in this paper). Using these methods, researchers have been able to focus their taxonomic studies on closely related species groups, rather than higher-level groups that may have been easier to diagnose based on morphology. 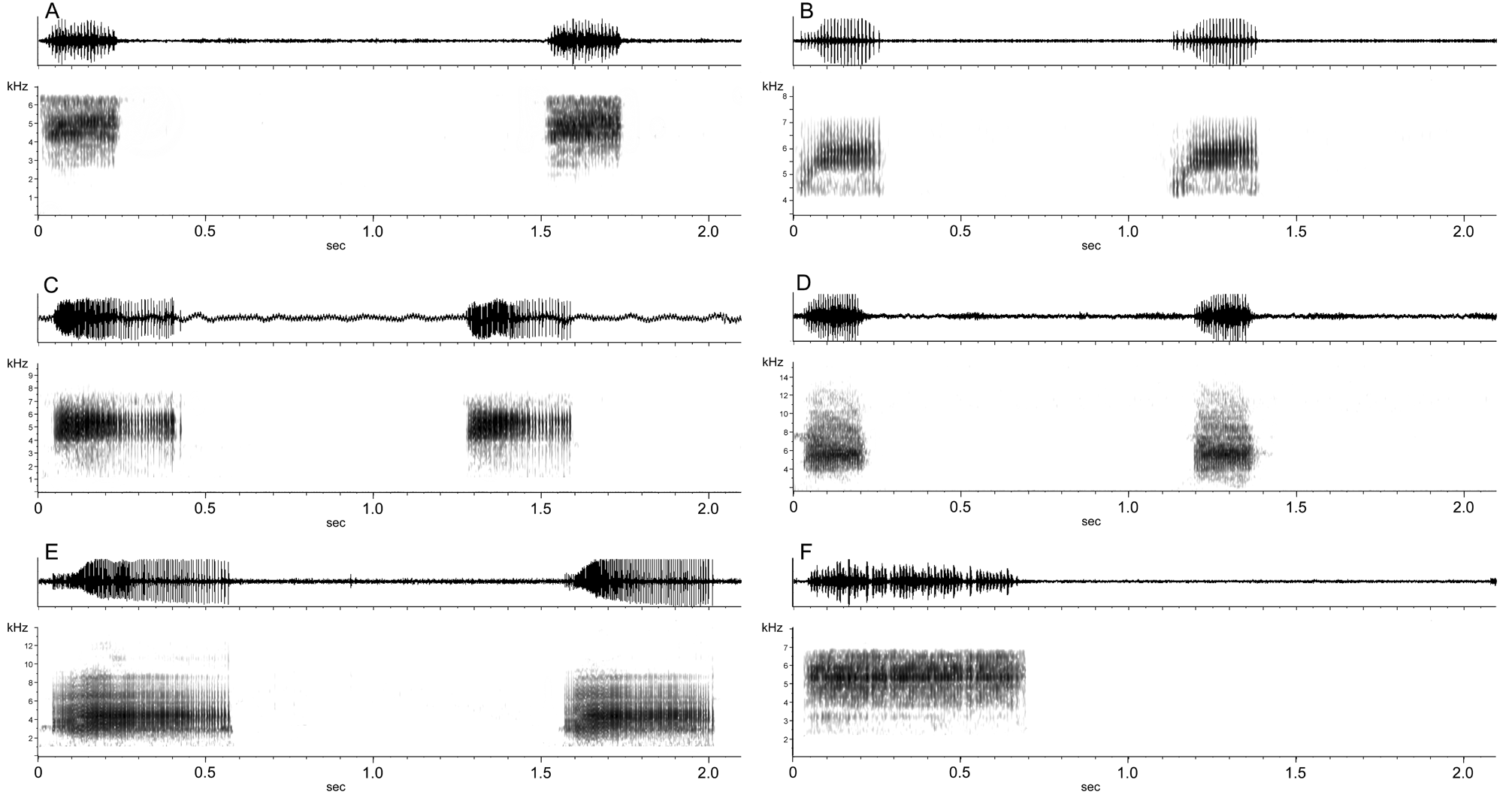