The new species is assigned to the genus Mantidactylus   based on the presence of an intercalary element between terminal and subterminal phalanges of fingers and toes (verified by external observation only), of a central depression in femoral glands and of a (very) rudimentary femoral gland in the female. Within Mantidactylus   , it is assigned to the nominal subgenus Mantidactylus   by combination of (1) very large body size (male SVL 88– 93 mm, female SVL 85–103 mm), (2) absence of dorsolateral colour border, (3) absence of a distinct frenal stripe, (4) absence of large yellowish patches or stripes in the inguinal region or between colouration of flanks and belly, (5) fully webbed feet and (6) riparian habits, living very close to or in streams. The assignment of the species to this group is also supported by its molecular phylogenetic relationships.

From the two described species in the subgenus Mantidactylus   , the new species is distinguished as follows:

Description of the holotype. Adult male in excellent state of preservation. For measurements, see Table 1. Body rather stout. Head wider than long, slightly wider than body.

Etymology. The species name is a noun in apposition to the genus name, and is the Malagasy word for large frogs in general (as opposed to ‘sahona’, which usually refers to small frogs), and those of the subgenus Mantidactylus   in particular.

Variation. No obvious difference in tympanum diameter between males and females (TD/SVL female 0.032 –0.043, male 0.037 –0.047). The paratypes and additional photographed specimens in general agree with the holotype in morphology and colouration. In preserved females, femoral glands are not recognisable externally. In life, their femoral glands are visible as tiny black patches (cf. photos; Figure 6F, H View Figure 6 ). Some females (ZSM 1800/ 2010 in particular) have very dark throat colouration. In a young male (ZSM 582/2014), femoral pores are already distinct (both externally and internally) and ovoid.

Natural History. A large nocturnal frog typically found in relatively calm stretches of streams, including small and shallow streams with sandy bottom in rainforest (e.g., Tsaratanana), and more rarely also in shallow stretches of wider streams with rocky bottom in more open areas at the edge of rainforest (e.g., near Bemanevika). In Besariaka, individuals of this species also showed an apparently distinct natural history and behaviour, preferring running water (usually moving in the central parts of streams), while M. grandidieri   appeared associated more closely with stream banks. Mantidactylus radaka   sp. nov. is the only species of the subgenus for which some natural history information is available: calls and tadpoles were described, from Tsaratanana and from a site between Bealanana and Antsohihy (close to the collection locality of ZSM 96/2016), respectively, by Vences et al. (2004) and Schulze et al. (2016), under the name M. guttulatus   .

Conservation. During fieldwork in 2016, this species was found to be rather abundant, even where the forest was heavily degraded, as long as some riparian habitat remained. However, it is also actively hunted as a source of food by local people in the Bealanana District ( Figure 10 View Figure 10 ). When asked, two locals stated that they no longer hunted these frogs in their home village (Ampandrana, ca. 14.704°S, 48.589°E), because they are no longer found in sufficient abundance in its vicinity. We managed to collect specimens from the river that flows towards Ampandrana only by going upstream (14.71788°S, 48.57548°E), and these frogs were considerably more abundant 5 km further SSW along the Route National 31 (at Andranonafindra), where there are no further villages for another 15 km. Thus, it seems evident that anthropogenic pressures are having impacts on local populations. However, the extent of those impacts is currently unclear, and given the apparently very large clutches that these frogs have (see the egg-laden ovaries evident in Figure 10C View Figure 10 ) and their stream-dwelling tadpoles, it is possible that up-stream populations may seed down-stream ones, and the species may thus be rather resilient to exploitation and able to recover quickly if pressures cease.

At present, the distribution of this species appears to be rather large: a minimum convex polygon of known localities has an area of 12,534 km 2. Over that area, there is no doubt that the habitat of the species is declining in extent and quality, and, although it is found in numerous locations, its habitat is also severely fragmented. Therefore, this species qualifies as Vulnerable under the International Union for Conservation of Nature (IUCN) Red List of Threatened Species, criterion B1ab(iii) ( IUCN 2012).

Besides the three species now recognised, our analysis has identified four additional lineages in the subgenus Mantidactylus   ( Figure 1 View Figure 1 ), for which we have herein used the candidate species names Mantidactylus sp.   Ca55, Ca56, Ca66 and Ca67. At present, data are clearly insufficient to take taxonomic decisions regarding these lineages.

Mantidactylus sp.   Ca55 and Ca56 occur sympatrically in Betampona, but no specimens of either candidate species were available for morphological examination in this study. Both of these candidate species are crepuscular-nocturnal. In Betampona, Mantidactylus sp.   Ca56 seems to be both more abundant and more widespread, but precise data on its fine-scale distribution within this reserve are thus far lacking. Mantidactylus sp.   Ca56 inhabits all large and fast-flowing streams across the reserve, while Mantidactylus sp.   Ca55 seems to prefer lateral branches of the fast-flowing streams, where water is shallower and runs much more slowly. Photos of genetically identified individuals of the two candidate species ( Figure 7 View Figure 7 ) do not immediately reveal obvious morphological differences between them. They do not appear to be sister species based on the mitochondrial data ( Figure 1 View Figure 1 ), and in the nuclear RAG-1 gene, the two examined samples do not share alleles. If confirmed with a larger number of samples, such a concordance between mitochondrial and nuclear gene signals in sympatry would clearly be indicative of a status as separate species ( Padial et al. 2010).

In contrast, Mantidactylus sp.   Ca66 and Ca67 appear to be allopatric sister lineages distributed in the South East. Their mitochondrial divergence is low, and they may be conspecific. However, their distinctness from other species and candidate species of the subgenus Mantidactylus   is supported by exclusive RAG-1 alleles of numerous individuals sequenced, and by their apparently very smooth skin. Thus, they are likely to represent at least one new and as yet undescribed species. In the forest at Manantantely, Mantidactylus sp.   Ca66 was nocturnal and living in rocky streams in rather pristine low-elevation rainforest. 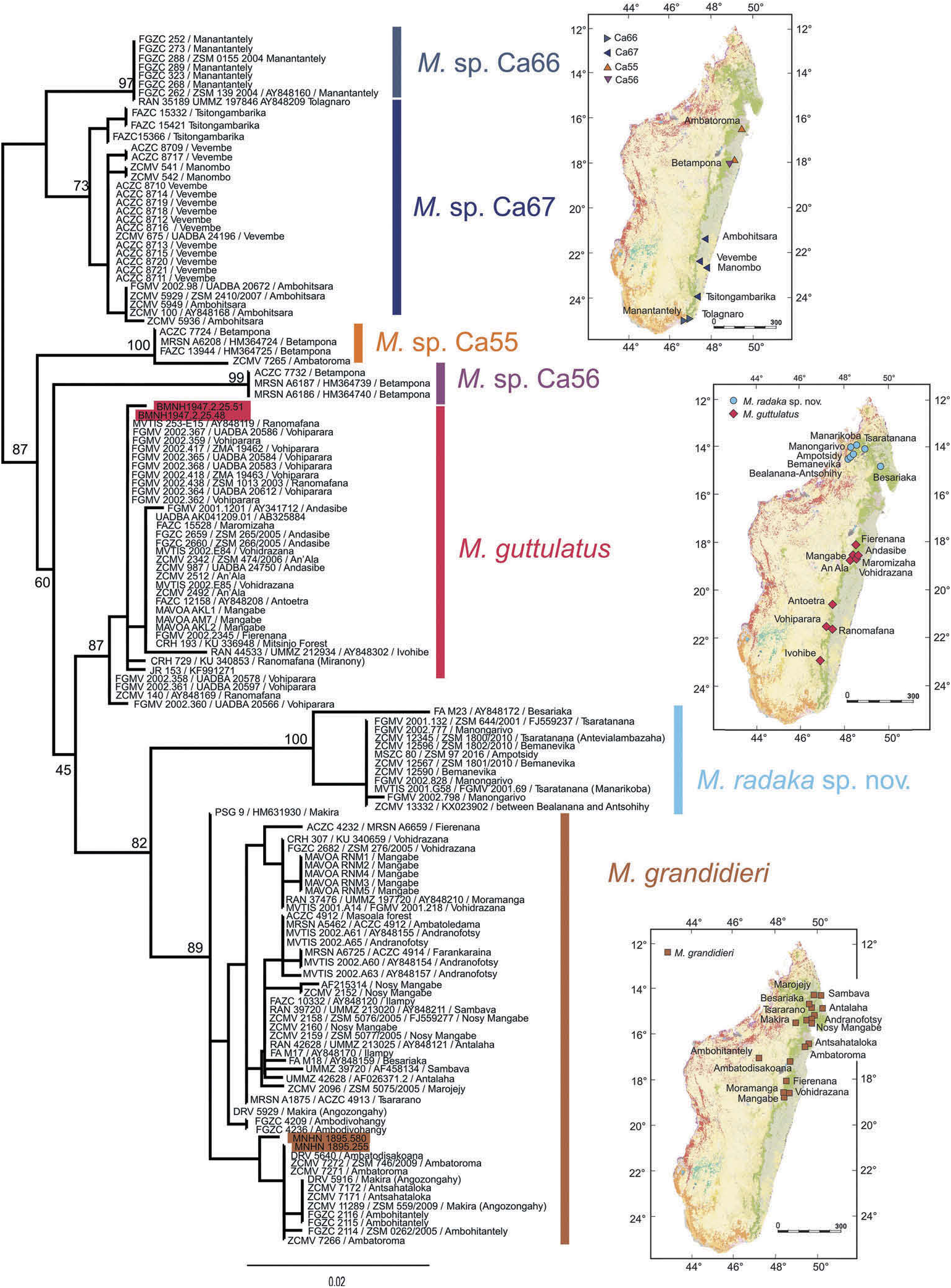 Figure 1. Maximum likelihood phylogenetic tree obtained from 514 bp of the mitochondrial 16S rRNA gene. The values at the nodes are the bootstrap supports (not given for intra-lineage nodes for improved clarity). The type specimens of M. guttulatus and M. grandidieri from the London and Paris museum collections are highlighted in red and brown, respectively. 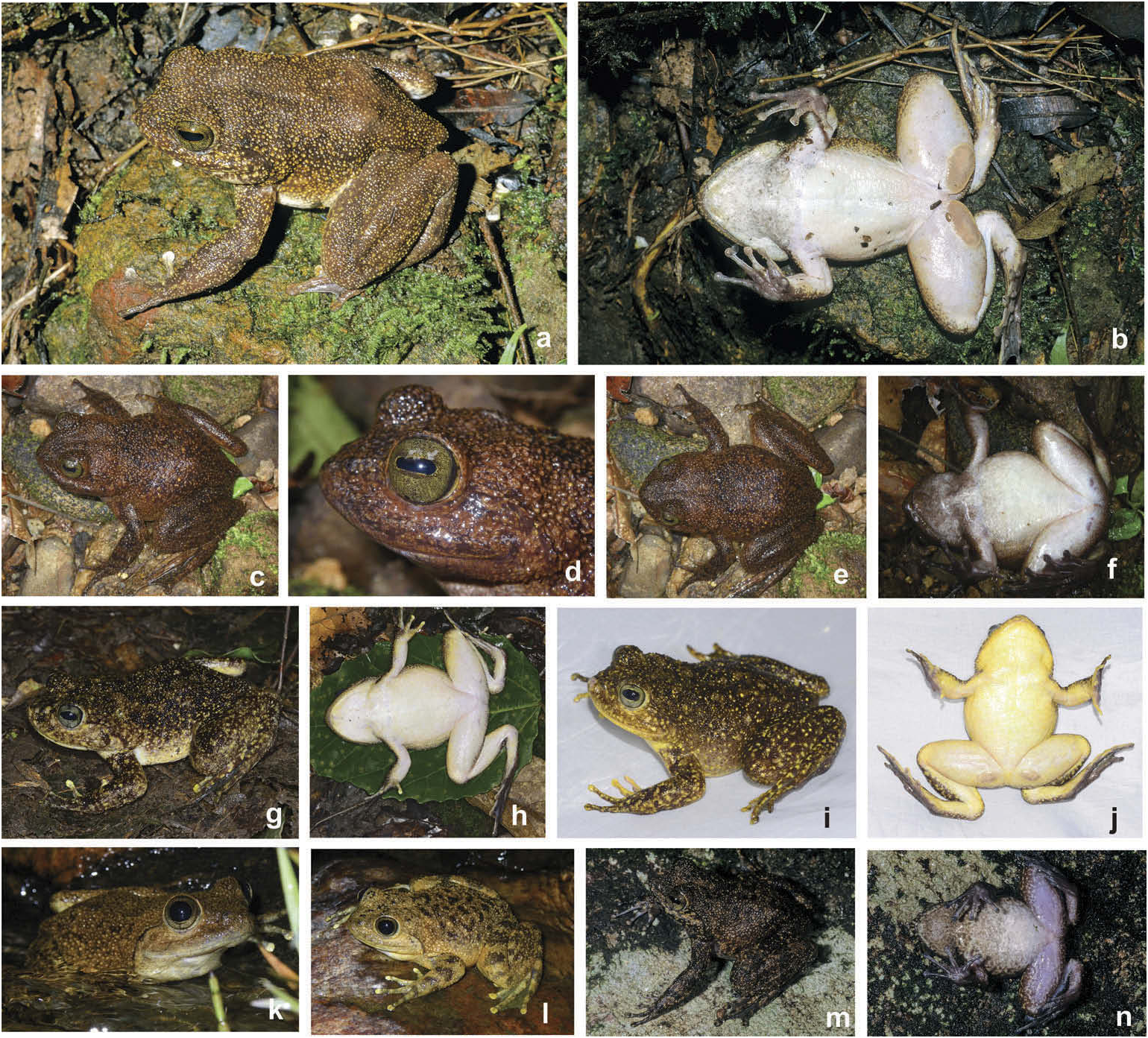 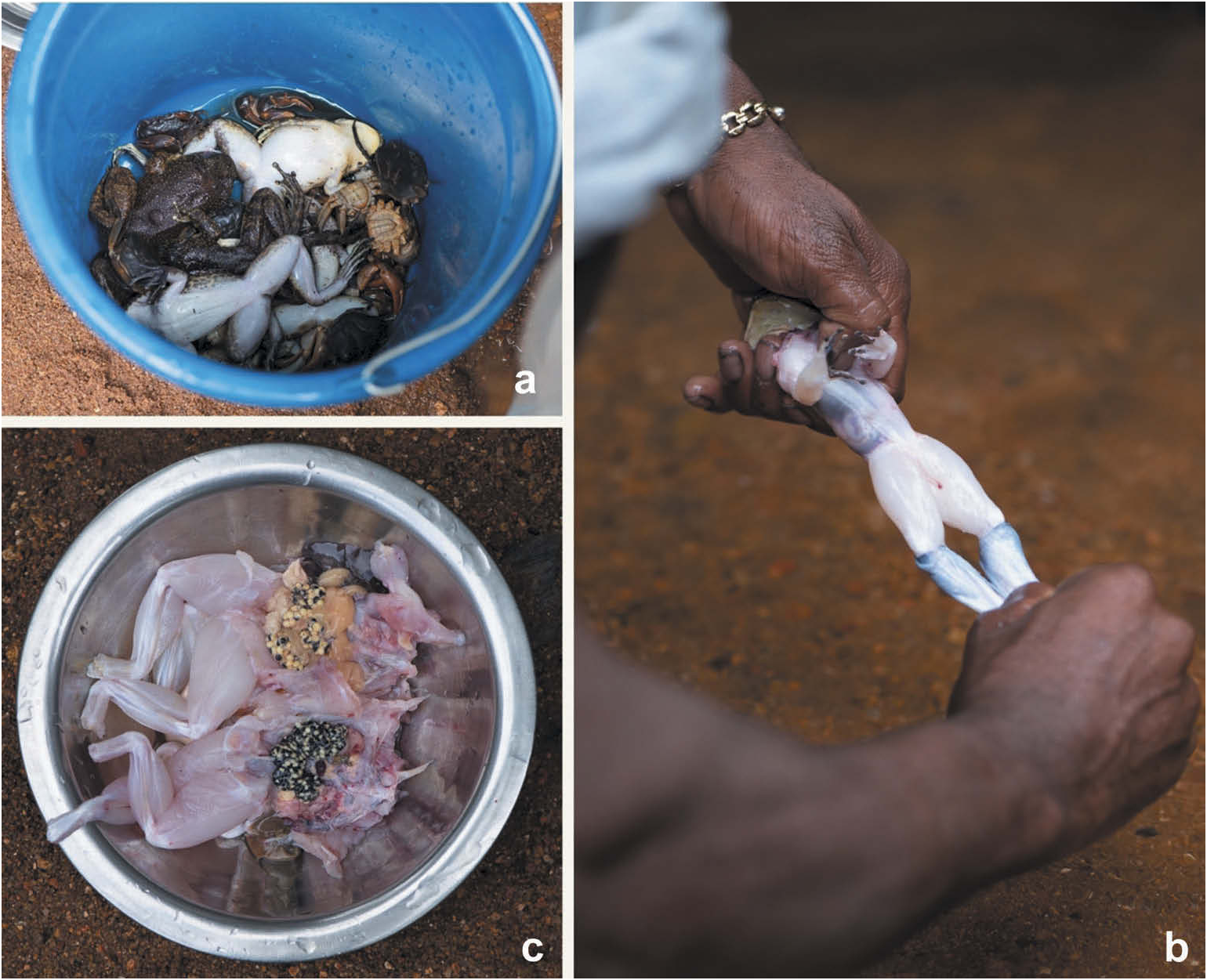 Figure 10. Mantidactylus (Mantidactylus) radaka sp. nov. being prepared for human consumption. (a) Frogs and crabs are collected from broad streams. Then (b) the frogs are gutted and skinned, and the head, hands and feet removed. The frog is then rinsed in the stream, leaving (c) cleaned animals for cooking in a stew. Note the ovaries full with hundreds of eggs.