Hydrangea durifolia   is known from the type and an additional collection in northern Colombia (Fig. 2 View Figure 2 ).

McClintock (1957) cited the type collection at G as “holotype”, but there are two specimens, as in the case of H. caucana   , so we here designate a second-step lectotype with the better of the G sheets. She also mentioned the existence of a fragment and photo in F, but we have not seen these, despite a visit to this herbarium. Apart from the original syntype (Holton 661, G, with locality in the "regione neogranadino-bogotana"), there is only one other specimen (see details below) that with certainty belongs to this species amongst the material we have studied for this revision. The leaves of the type specimen and of the Holton 661 specimen are part of the inflorescence, which complicates the recognition of this species, as “vegetative” leaves are important for a correct identification at species level. However, these leaves are present in the only additional specimen we could assign with certainty to this species (Fig. 3 View Figure 3 ). We have noticed that we are only able to identify collections with mere inflorescences of Cornidia   up to species level, after having studied many samples of a specific taxon, as the leaves on the inflorescence axis do not have easily definable species-specific characteristics in comparison with the “regular” leaves.

The herbaria COL and F each house a black and white photo of a specimen of the Linden 1393 collection, presumably taken in the BR and G herbaria, respectively.

Because of the lack of material and therefore, the uncertainty about this species´ circumscription, it is currently not possible to present an amended description. However, we also have no elements to consider this species as a synonym of one of the other species treated here, although it is morphologically close to H. oerstedii   Briq. Briquet (1919) distinguished H. oerstedii   by the much less coriaceous leaves, the inflorescence which has twice the width, the lax cymes as opposed to the more compact ones in H. durifolia   , the sepals of the marginal flowers being two or three times larger, more papyraceous, with more abundant joined and protruding veins, which we can confirm based on the type specimens of both taxa. The few specimens of H. durifolia   are known from the Colombian departments of Norte de Santander and Santander, whereas H. oerstedii   is distributed in Costa Rica and Panama. Exploring field work in forests at elevations of around 2000-3000 m in the departments of Norte de Santander and Santander in the area of Pamplona might lead to the rediscovery of this species and the material will be helpful to define its taxonomic status.

The phylogenetic relationships of Hydrangea durifolia   are yet unknown as there was no fresh material available for our molecular study (Granados Mendoza et al. unpublished results).

It is possible this species is Critically Endangered according to the IUCN categories and criteria ( IUCN 2012), given its AAO of 8 km2, the existence of less than five locations and an extensive reduction in both EOO and AOO because of habitat destruction and fragmentation. However, we currently propose this species as Data Deficient, as its actual status is not well-known. 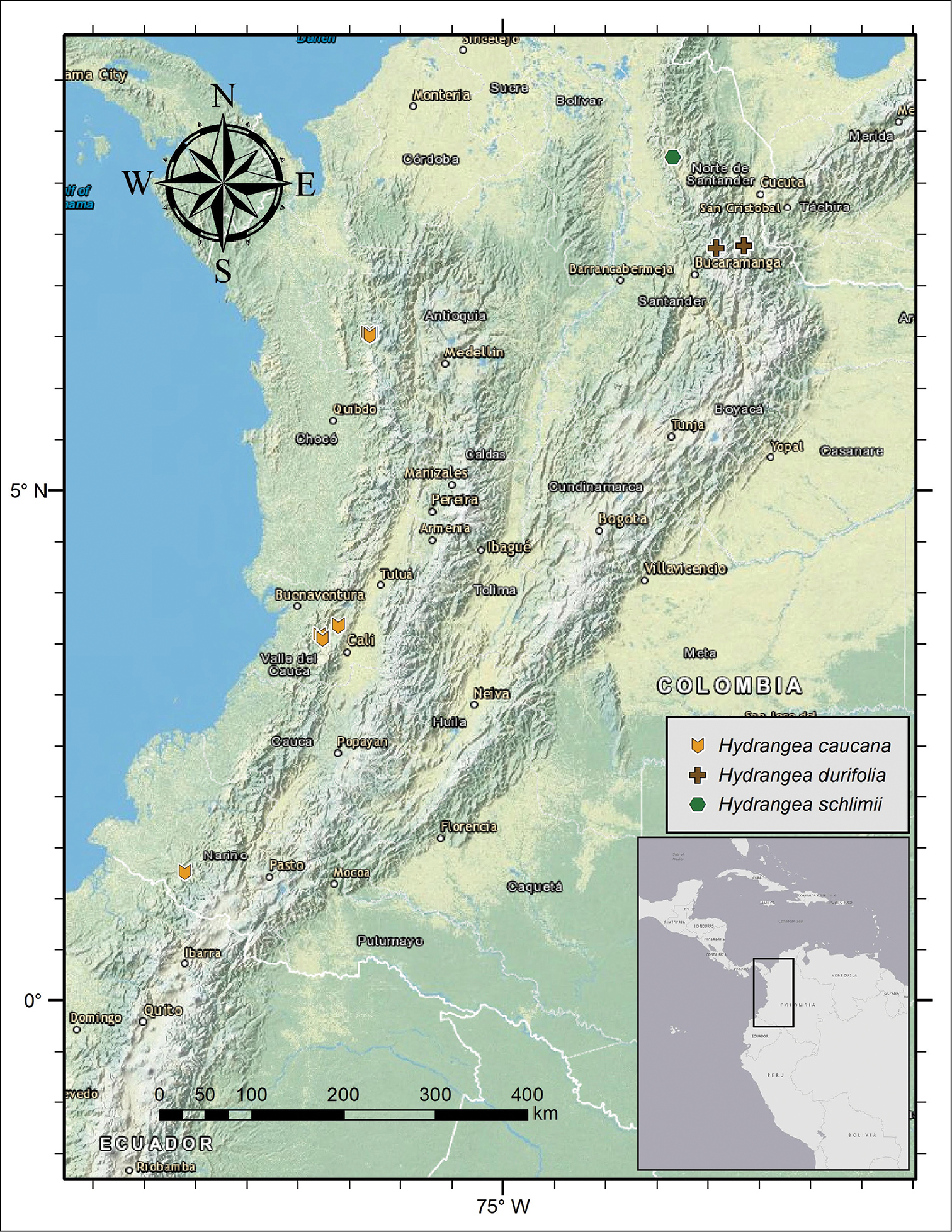 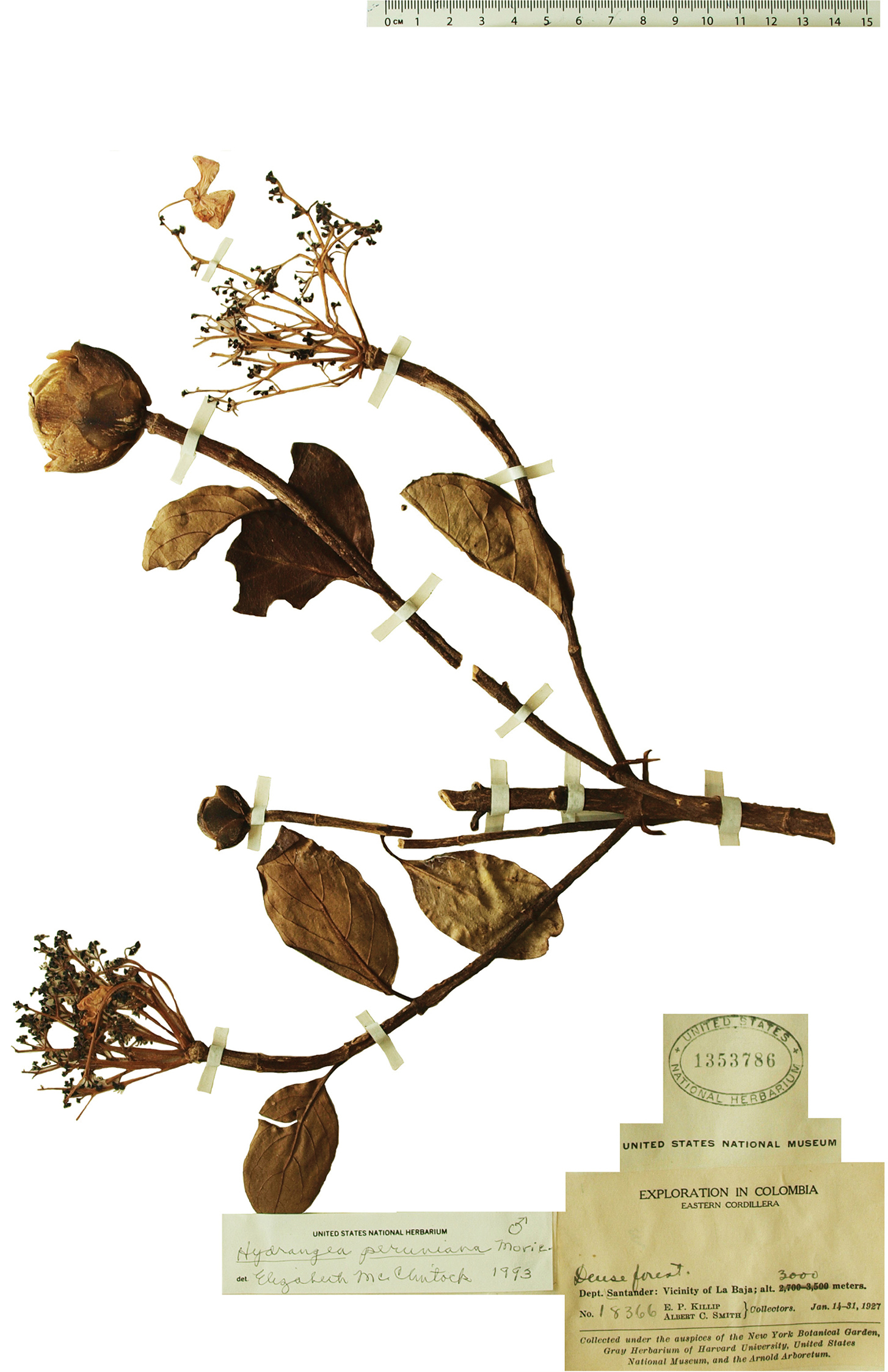